Many towns in Montana have a very rich history that dates back centuries. From mining towns to regions originally occupied by Native North American Indians, otherwise called Native Americans, to animals that long-lived in its beautiful landscapes and are now extinct. Yes, I’m talking about dinosaurs. This history is preserved in the many museums found around this state.

Learn about the culture and heritage of Native Americans, the Jurassic era, artifacts that were unearthed all over the vast landscapes, and the history of the people who once built the Big Sky Country as we know it. Visit art museums and enrich your creativity with masterpieces from excellent artists and the best paintings from historical painting geniuses.

To give you a tour into this fantastic world of history and art, here is a list of the best Museums to visit in Montana.

The 10 Best Museums in Montana

This largely visited museum in Great Falls is home to the most admirable art pieces of one of the most remarkable painters that ever lived in Montana. Charles Marion Russell, who they named the Museum after, did an exceptional work of capturing the rich heritage of the North Plains in his ink paintings, illustrated letters, watercolor paintings, oil paintings, and clay models. His art pieces depict the 19th century Montana cowboy culture and the beautiful Montana landscapes.

This marvelous block comprises 16 galleries that host over 3,000 art pieces, academic centers, a research center, and a sculpture garden. Here, you’ll find out everything you need to know about the Northern Plains and the Indians that inhabited it in the 1800s, their cultural heritage, and their way of life.

Some exhibitions you should expect to see on this visit are The Bison, C. M. Russell paintings, firearms, and many more. The Bison exhibition focuses on the cultural and historical significance of the Bison in the 19th century up to the early 21st century.

From the firearms exhibition, you’ll learn its evolution in size, usage, and design over the years, why it was a valuable tool, and its impact. You’ll see pieces of some of the most significant firearm designs there were.

Education is available in this museum block for both children and adults who wish to nurture their talents. They also encourage group and school reservations for those who wish to visit. These are customizable and you are free to specify what your focus will be upon your visit, as well as if you prefer to be guided by experts or not. There’s also a virtual museum tour available if you can’t visit physicall2.y.

With over 50,000 artifacts collected from all over the land and its neighboring regions on display, you’ll experience the richness of the history of the Big Sky Country right here in the heart of Helena. These pieces include everything from archeological artifacts, art pieces, agricultural tools, mining objects, you name it.

The Native American culture from different tribes around Montana is also represented here. Of the 6,000 artifacts, you’ll find pieces from the Blackfeet tribe, the Salish tribe, and the Sioux people. There are also garments worn by Chinese immigrants in 1890, ceremonial clothes by the Rebekahs, and Old Fellow fraternities. Firearms and riffle pieces from the 19th century are also displayed here.

This museum preserves the Original Governor’s Mansion, an architectural marvel, and a historical landmark. Clothes worn by the Governor on his inauguration are also preserved in the museum. Paintings of the great C.M Russell and other decorative art and furniture are also part of this broad display. You’ll see pictures of Native American Soldiers involved in the world wars and a history of their involvement.

Plan a visit to this museum for an extensive learning experience about Montana’s past and recent history. Guided tours are available. You can also go shopping for artifacts and history books in the available physical and online stores.

3. Museum of the Rockies, Bozeman 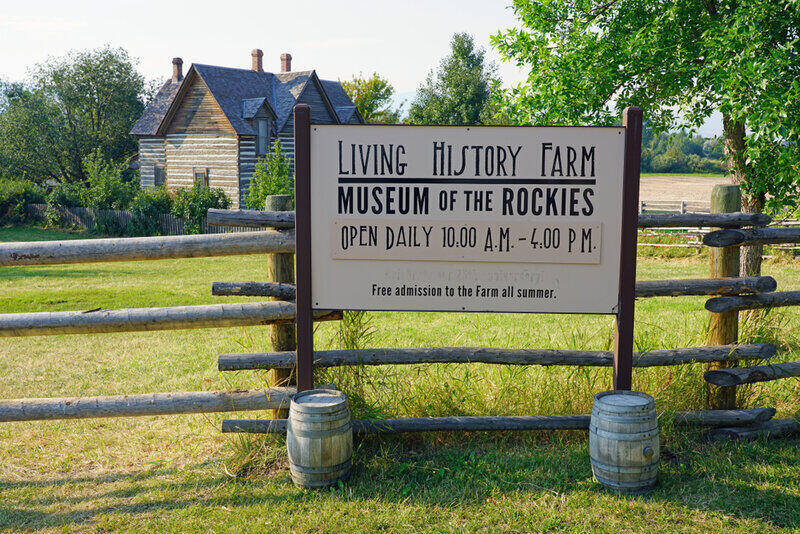 This museum has one of the largest collections of dinosaur archeological remains in the world. As you arrive, a 15 feet tall picturesque model of one of Montana’s Tyrannosaurus rexes graces the entrance.

Take a tour into the Jurassic world at The Siebel Dinosaur Complex, where you’ll get a peek into the history of these once ferocious predators. You’ll be shown their eggs, babies, adult dinosaurs, Tyrannosaurus rexes, Triceratops, everything from the Mesozoic and Cenozoic eras.

Besides dinosaurs, they display other animals now extinct in the region, such as rhinos, mammoths, and Borophagus (bone-crushing dogs). The Living History Farm is where you’ll get to experience a typical Montana homestead in the late 1800s and early 1900s.

This homestead was built in 1889, along with a barn that was built in 1990. Other parts of this homestead, such as the chicken shed, blacksmith shop, and granary, were recreated to look like a typical 20th century home.

Here you get a live experience of what life was like then, how labor-oriented it was. From cooking, milking, baking, mending clothes, to splitting wood. There’s a garden that gets plowed and they harvest produce and all other agricultural practices from back in the day.

There are lots of other displays here, such as bison murals, pictures of Native Americans. The history of these North Plain Indians is well narrated in this museum if you’d be interested in learning their heritage.

There’s a children’s museum rich in Yellowstone history as well as a planetarium for both entertainment and learning purposes. Visit their stores and get souvenirs for your family and friends. Plan your visit and get the best of the paleontological world in Montana. 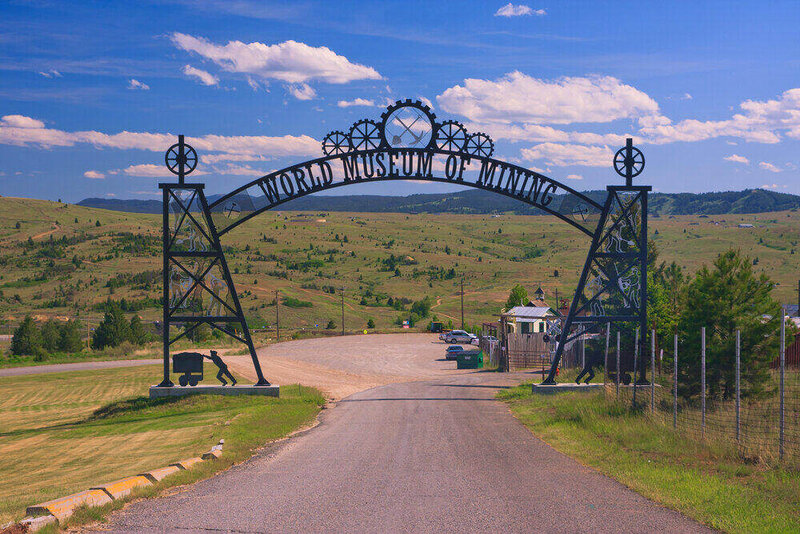 Founded in 1963, the World Museum of Mining is one of the few museums in Montana that gives you an actual life experience of what a mining yard looked like in the 19th century. It was built to preserve the heritage and legacy of Butte as a mining town. It’s in an actual mining ground, making the experience a mostly outdoor one. Visit this Montana museum and listen to stories of miners that once labored away on these grounds.

The museum consists of about 50 buildings where there are exhibits, 66 permanent exhibits as well as numerous artifacts. There are two tours, an underground mine tour, and a general admission tour. In the former, you’re taken 100 feet down to the Orphan Girl Mine where you’ll also see mining tools that were used. On the general admission tickets, you’ll be taken on a tour around the Orphan Girl Mine Yard.

Some of the exhibits you should expect to see are Roy Garret’s collection of minerals and rocks from his forty years as a miner on Orphan Girl Mine Yard.  He died in 1990 and had a passion for collecting precious stones in his lifetime.

The Hell Roarin’ Gulch is a replica of a once old mining town, with 15 intact historic buildings and about 35 structures built by volunteers using old equipment. There is also a memorial displaying names of 2,500 miners who died from mining accidents since 1865.

Founded in May 1990 by George Keremedjiev, The American Computer and Robotics Museum is one of the oldest museums aimed at exploring the history of computers. This museum will take you on a tour of the evolution of information technology, from as far back as the stone tablet ages to the invention of the first computer. With 4,000 years’ worth of exhibits from the information world, this museum is the best there is of its kind.

Schedule a visit to learn about quantum computing, artificial intelligence, space race, and coding. Delve into the evolution of personal computers and view exhibits from known computer inventors. Take virtual or physical field trips and get enlightened.

This museum was built to narrate travel stories through the Yellowstone National Park. It was founded in 1908 and is rich in the history of the growth of West Yellowstone town into what it is today. The history takes you through the various evolutionary stages of transport that people have used to arrive at the Yellowstone National Park over the years. From arriving in horses and being toured around on stage couches to arriving in airplanes and being toured around in tour buses.

View exhibits of the 1959 earthquakes and the 1988 fires and even watch movies about them. These were major events that impacted these landscapes. The history of West Yellowstone lies right here, and it’s certainly worth the visit.

This museum opened in 1964 in a historic building that was Yellowstone County Jail. The museum’s focus is collecting artistic pieces from skilled artists that lived and still live all over Montana and other neighboring regions. From Murals to oil paintings, water paintings, and more, get to learn about the history of Montana through these visually appealing collections at YAM.

Visit the Visible Vault to get an even closer look at these art pieces. With over 3,500 pieces, you’ll get an even more extensive view of items not on display. Also, if you wish to nurture your artistic talent or even your child’s, there are many programs to enroll in.

This is a mansion that is an architectural marvel from the early 1900s. It was built in 1903 by Preston Boyd Moss and is significant to the architectural and historical culture of Billings. Parts of the 1991 Son of the Morning Star film and Return to Lonesome Dove miniseries were filmed at this mansion.

Visit this historic house and get a sneak peek into the lives of the famous Moss family, a family that contributed immensely towards the growth of Billings. Get to see amenities that were technologically ahead of their time, such as electric doorbells, the rotary telephone, and a heated plumbing system.

This family-preserved museum is a wholesome representation of Montana’s earlier life in every aspect. The exhibit buildings contain collections of archeological artifacts, paintings, and everything in between.

There is so much on display in this museum and it would take you hours to go over. Schedule a visit and take in every aspect there is to Montana history. The museum is open seasonally between April and October depending on the weather.

This is the most diverse museum in Montana yet, with everything from sculptures to antique cars. Everything that pertains to life in Montana is preserved and displayed here. Whatever piques your interest; all you have to do is choose. Is it early transportation? There are scores of ancient locomotive pieces on display, from the 1890s tricycle, a 1912 Harley Motorcycle, the 1937 Hudson Terraplane, and even wooden boats.

With over 340,000 objects on exhibit, something will definitely interest you. Plan your visit here and experience different aspects of Montana’s history, including agriculture, military, hunting, transportation, and their general way of life from the museum’s diverse collection.