The facility is the second largest dinosaur museum in the state and is certainly the only one to feature dinosaurs in a theological and biblical context.

The museum charges itself with the mission to challenge people to consider evolutionary concepts and their underlying premises.

The museum is interesting in that it includes exhibits explaining various geological origins, including how the biblical flood of Noah’s day would have deposited fossils and the various ways in which dinosaurs might be related to biblical history.

You can reach the museum off the I-94, exit 215, and you can’t really miss the museum with its T-Rex head and neck protruding through the wall of the main building, which can be seen from the highway.

History of the Glendive Dinosaur and Fossil Museum

The Glendive Dinosaur and Fossil Museum first opened its doors in 2009 after construction had begun in 2005.

The facility was the brainchild of founder Otis Kline who, along with the ‘Advancing Creation Truth Foundation’ managed to raise the 1.5 million dollars necessary for construction from local groups and other donors to open the building.

It seemed like a good move almost immediately when more than 1000 visitors per month started showing up.

The Theology Angle of the Museum

The unique angle offered by the museum is that much of the evolution theory we are all taught is utter nonsense, in fact, nothing less than grand deception by the scientific community.

The museum was originally intended to form part of the Montana Dinosaur Trail along with the nearby Gateway Frontier Museum, but the idea was abandoned by Mr. Kline due to different ideas about the timescales and evolution involved.

In contrast to the regular theory that mountains rose up over time from the former sea floor for instance, the museum’s take on this is that God called up the waters of the deep, setting off various tsunamis and flooding to rearrange the landscape.

Many exhibits include claims related to the fact that the evolution story most people are familiar with is fiction, and the facility’s theater shows films and documentaries in support of this approach.

Having bibles in the museum is nothing new as  many of the dinosaur facilities in Montana do the same—but here all of them are open on the same page—the Book of Job 40, which talks of a ‘behemoth’ and a ‘leviathan’.

The second floor of the building emphasizes the biblical theme in terms of the great flood and here the museum offers a few of its own theories related to geological formations and features.

For instance, the museum’s curators believe there is no way the Colorado River could have carved out something like the Grand Canyon as it would have needed to flow upwards for 2,000 feet or more.

They believe instead that the flood was the more logical explanation. A Noah’s Ark model depicts dinosaurs along with the other animals that reportedly went into the ark.

Make of it what you will, it certainly is something different to consider.

Main Attractions in the Glendive Dinosaur and Fossil Museum 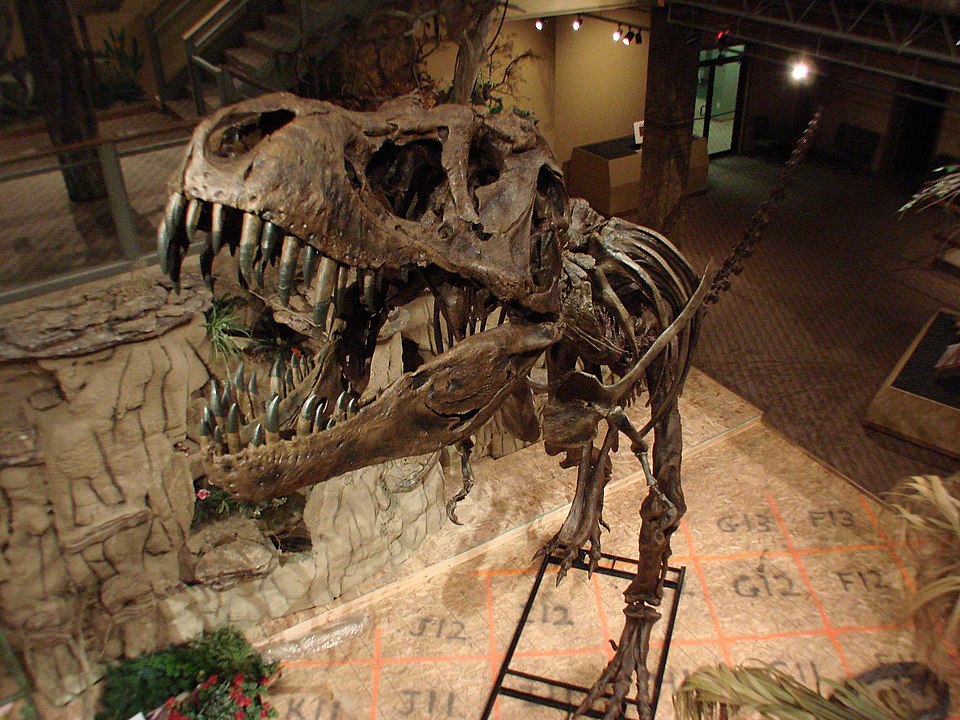 The main feature is 18-feet tall—a 40-foot long T-rex—and a close second comes by way of a 39-foot long Acrocanthosaurus.

There is a Triceratops exhibit, a fossil mammal exhibit featuring a Mastodon, a dire wolf, and a saber-toothed cat. Other main exhibits include a giant, 40-foot long sea turtle named Tylosaur and a Plesiosaur in the Marine Room.

There is an exhibit devoted to the age of the earth and a more recently-installed display that features information pertaining to the formation of the geologic column.

The museum features a special exhibit related to Biblical history, and there is a theater and a resource center.

There is also a gift shop that specializes in all kinds of dinosaur-related merchandise, but most notably it produces unique one-off jewelry creations which actually contain authentic dinosaur bone material.

The resource center contains books and films which try to help answer some of the challenging lines the museum pursues with regard to fossil records.

The Bible room contains historic Torah scrolls, a Bible in braille, a copy of a Gutenberg Bible, an Ethiopian Coptic Bible, and a 1611 King James Bible. Of course, they are all open to Job 40, which the museum’s curator believes makes reference to dinosaurs.

One of the more controversial exhibits is the replica of the Alvis Delk Cretaceous Footprint. This artifact allegedly contains a fossilized human footprint that is overlapped by that of a dinosaur.

This is another item challenged by many other scientists, but the fact is that this museum does have some of the best dinosaur bones on show anywhere in the world.

Criticism of the Glendive Dinosaur Museum

The museum has not been without its detractors and has its fair share of controversy and criticism. Some Paleontologists labeled the museum a “temple of ignorance” and “the opposite of a science museum”.

The curator of the only dinosaur museum bigger than this one in the state—the Museum of the Rockies—stated that the museum contained ‘nothing scientific’. Meow.

The facility has also been targeted by other dinosaur museums who believe this is a bare-faced attempt to convert visitors to the institute’s Bible and creationist theories by using Montana’s rich dinosaur history and finds.

One of the theories presented in the Glendive Dinosaur and Fossil Museum is that humans and dinosaurs lived at the same time, side-by-side. Another is based on the belief that the prehistoric monsters disappeared from the planet much more recently than science tells us.

This is obviously in direct contrast to the idea that they were wiped out millions of years back, with the museum placing this date somewhere closer to just 5 or 6,000 years.

The museum offers full and half-day fossil digs on a private site nearby. These occur throughout the summer and provide the opportunity for visitors to get some first-hand experience of digging for fossils and just how they are excavated and identified.

Half-day and full-day digs are offered in the surrounding rugged badlands of the Hell Creek Formation.

Unfortunately, these are deemed not really suitable for children under 8 years of age due to the techniques involved in fossil preparation in the workshop.

Participants get the opportunity to work on their own excavations or an existing fossil in the museum’s collection. This is a great hands-on experience for anyone remotely interested in dinosaurs—and especially for anyone considering a future career in paleontology!

Prior reservations and payment are necessary to join the digs, at least 24 in advance of the dig.

The Glendive Dinosaur and fossil museum present a unique and interesting angle on the dinosaur heritage of Montana.

The controversial aspects of the museum’s approach don’t seem to have done much to damage its visitor numbers, and despite its detractors’ comments, the museum does hold some solid dinosaur artifacts and displays.

So whether you just like dinosaurs or you are interested in something a bit different, the second-largest dinosaur-related museum in the state is definitely worth checking out!