As summer comes to a close and the tourists stream out of Yellowstone and Glacier National Park, a quieter, more placid landscape emerges. Things begin to slow down a bit, and communities around the state come together to host festivals and events that cater far more to locals.

The result is a more relaxed – and more authentic – Montana experience. This is the time of year to grab a pint at a bar and strike up a conversation, to enjoy state and national parks unfettered, and to get a glimpse of those famous fall colors.

Animals to become a bit more visible this time of year; fall marks the beginning of the mating season, and the bears, elk, and all manner of other animals are more brazen about making an appearance. But be careful: however majestic they may appear, these are wild animals, and they are known to be particularly brazen this time of year. A safe distance from wildlife is a must if you’re visiting the parks in the fall.

If you’re an accomplished – or aspiring – angler, this is a fantastic time for trout fishing. In the first half of the month, rivers and streams near Bozeman offer the best conditions, with the Madison River, Jefferson River, and Yellowstone River all standing out as prime candidates.

During the last two weeks of the month, shift your sights to the Missouri River which boasts some of the best trout fishing of the entire year at this time.

What About The Weather In Montana In September? 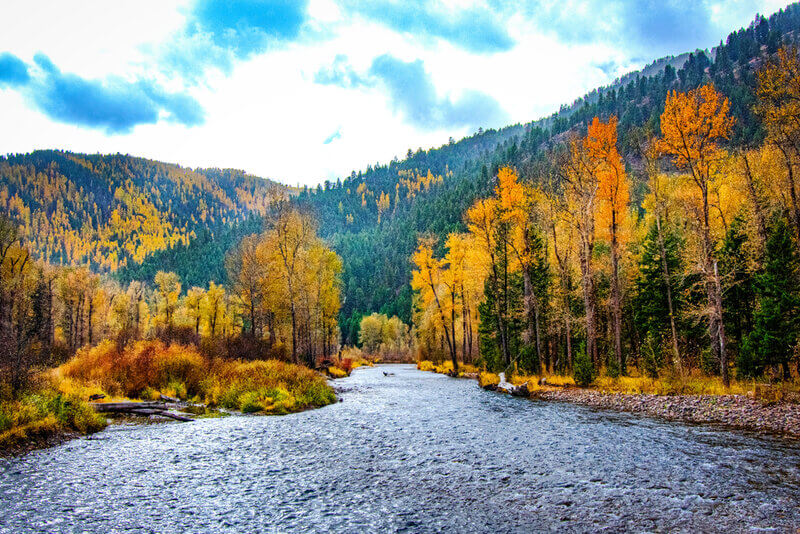 September ushers in the beginning of fall, so you can expect cooler temperatures, especially at night and in higher altitudes. No matter where in the state you’re headed, it’s wise to pack a few layers and a rain jacket.

This doesn’t mean that the weather can’t get hot – it certainly can, with some days in September reaching 85º – you’re just vastly more likely to catch an infrequent cold-snap in September than in August.

Looking at Bozeman Montana as an example of weather in September, the town sees daily highs drop by 13°F from an average of 78°F to 65°F. It is rare for temperatures to drop below 49°F or exceed 88°F during the month.

Travel To Montana in September 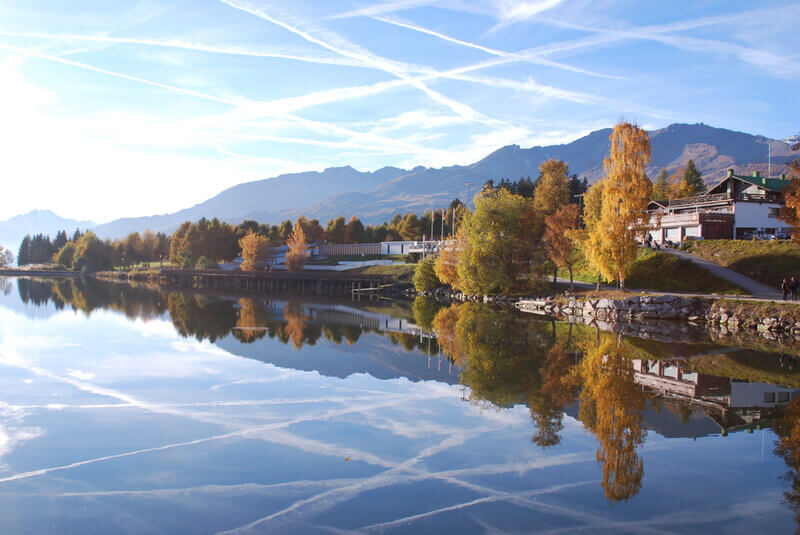 In September, there are some reasonably priced flights to be found between SFO and Missoula and Seattle and Bozeman, but the cheapest ones are typically from Denver and just outside of Phoenix in Mesa. Keep in mind that bags can add a considerable amount to your flight price, particularly if you are bringing some kind of sports equipment with you like an inflatable paddleboard or a bike.

The end of the high season also means tours and RV rentals will become much more plentiful as the month goes on. With car rentals increasing in availability they also decrease in price. This is a great time to fly and drive, and an epic time to plan a road trip in Montana.

Events in Montana in September 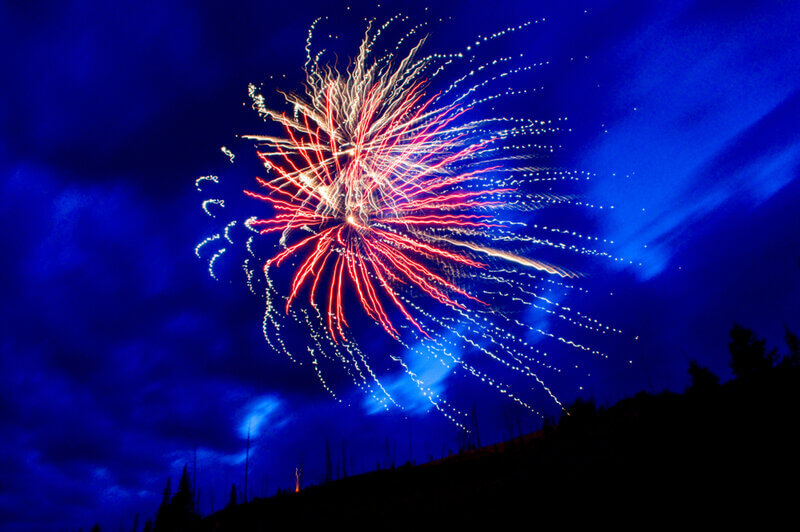 At the beginning of the month in Missoula is Germanfest, a celebration of all things Deutschland to commemorate Missoula’s partnership with its sister city, Neckargemünd, Germany. During the festival, you can enjoy singing and dancing to live tuba music and authentic German food and beer, and you can even buy beer steins to take home with you.

Another fair that celebrates ethnic heritage in Montana, the Libby Nordicfest features a fjord horse show and a Viking encampment. There will also be plenty of music, costumes, food, and fun activities for kids. During Nordicfest, the whole town gets involved, so events and activities are spread around different venues. There’s even a parade!

And no matter if you’re a brewer, a bartender, or just a beer enthusiast, two of the seminal craft beer events of the entire year occur in September in Bozeman, both hosted by the Montana Brewers Association. First up is the Montana Brewers Conference, which joins folks in the industry together to benefit from informative presentations and various opportunities for networking.

This is immediately followed by the Montana Brewers’ Fall Rendezvous, a showcase of Montana’s best craft brewers. At each booth, you sample a different Montana beer, each one poured into your own commemorative glass that you gather when you arrive. This is the perfect way to sample a variety of beers from the area if you’ve never tried many.

Things To Do In Montana In September 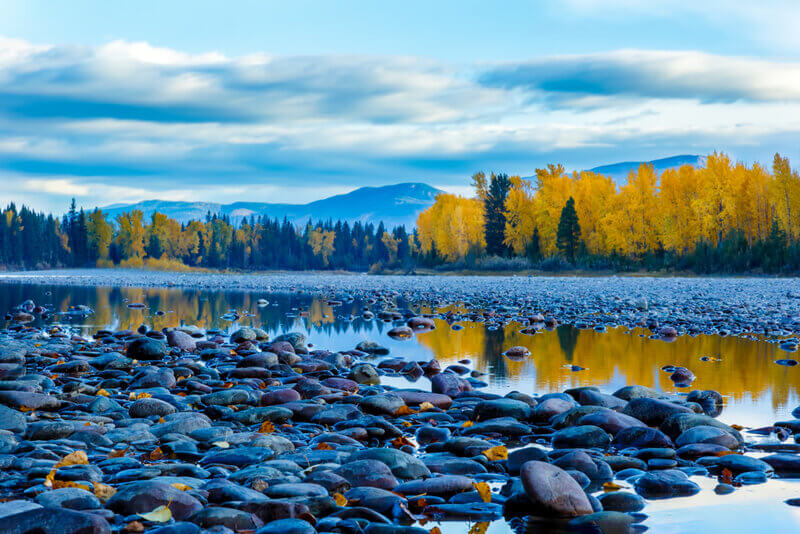 In celebration of National Public Lands Day, the National Park Service offers free admission to Glacier National Park on the fourth Saturday of September. If you’ve ever wondered what all the hype was about – or wanted to check it out before committing to an annual pass – this is the day to do it. No special planning or reservation is required, you can simply show up.

If you’re planning a visit to Yellowstone, keep in mind that some facilities start closing for the season in September. Grant Village and Canyon Campground close on the 12th and the 19th respectively, while Roosevelt Lodge and Cabins closes on the 6th, and the Lake Lodge closes on the 26th.

But don’t let this deter you from visiting Montana in September.

September in Yellowstone is when the crowds clear out just as the first leaves begin to turn colors. It’s a beautiful – and economical time to visit Yellowstone.

After the equinox, fall begins in earnest, and Glacier National Park puts on an extraordinary show. The last week of September is usually the best time to see the aspen trees turn bright gold and cottonwoods a deep orange. Crowds are at a minimum this time of year, so you’ll have plenty of solitude while you’re enjoying the fall colors.

Planning Your Trip To Montana In September 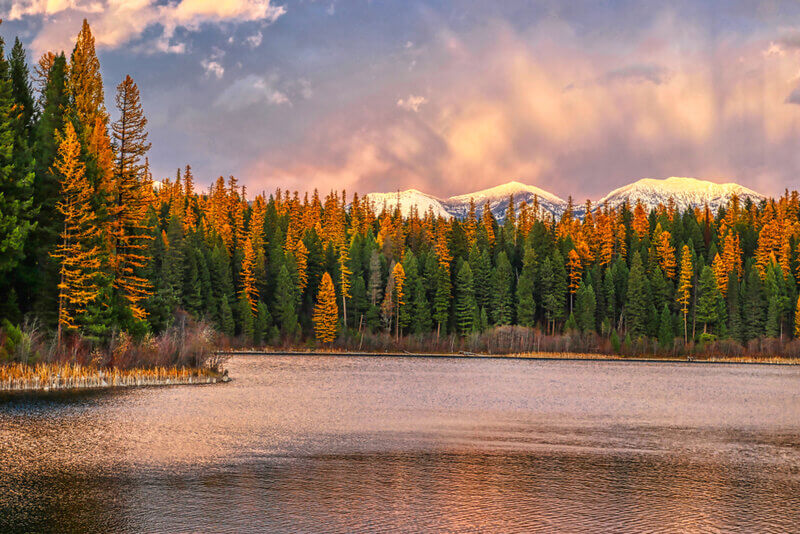