Montana’s independent non-profit institution the Museum of the Rockies (MOR) is located in Bozeman, and it also functions as a college-level division of the Montana State University.

On top of that, the facility is a Smithsonian Affiliate which serves as a repository for state and federal fossils and is widely regarded as one of the best research and history museums across the globe.

Visitors can experience one of the broadest collections of dinosaur fossils in the world at the MOR. Some of the most well-known displays of the museum have long included key items from the collection like the mounted T-Rex skeleton.

The museum also presents local Rocky Mountain historical aspects, along with various other avenues such as the Children’s Discovery Center, the Living History Farm, and the Taylor Planetarium—complete with some of the most advanced digital projection systems available in the world.

Visitors will notice on different occasions the exhibits change and rotate and include items from around the world. Along with that the museum hosts both regional and national historical showcases, planetarium events, educational programs & camps, lectures, and other events.

The Museum of the Rockies is in the heart of the Rocky Mountains and can be accessed on Highway I-90, by exiting on 19th Avenue then continuing south for about 4 miles on 19th Avenue to Kagy Boulevard, after that taking a left and following the signs to the museum.

Located on the Montana State University campus, the museum is one of the top attractions in the region aside from the landscape.

The History of the Museum of the Rockies 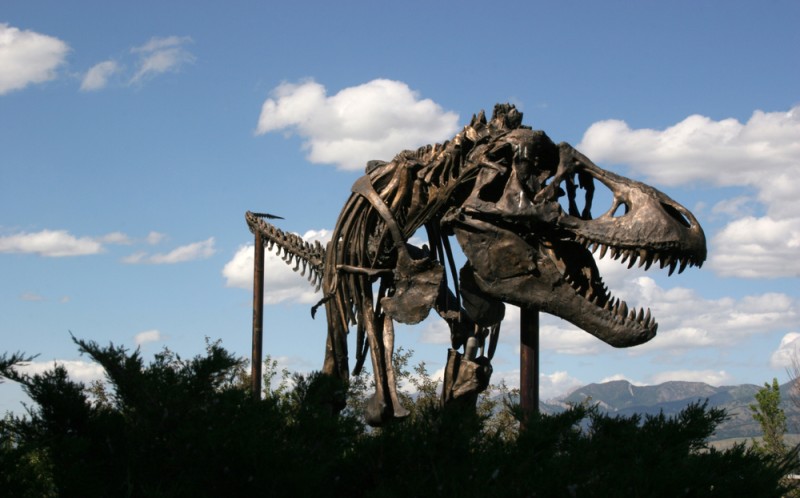 The Museum of the Rockies began as an idea between Dr. Caroline M. McGill, Montana State University Professor Merrill Burlingame, and MSU’s President Dr. Roland R. Renne, back in 1957.

It had been known initially as the McGill Museum before becoming the Museum of the Rockies in 1965.

Dr. McGill in fact functioned as Montana’s first pathologist, working out of Butte and coming to know the plight of the town’s miners first-hand.

When the museum was first set up in 1957, she contributed the majority of the initial collection items, housed in three Quonset huts that were also donations, unfortunately, Dr. McGill passed away in 1959 before the name change occurred.

Less Drew, the museum’s first operations director had managed to expand into two buildings, and later in 1982, when Mick Hagar became director he brought on Jack Horner (later of Jurrasic Park fame) to direct its paleontology department.

The new approach was completely transformative, making the museum a globally-renowned destination for some of the best dinosaur specimens on the planet.

One of the major changes introduced by the new curator of the museum was to take steps to ensure that any choice specimens found in Montana were automatically shipped off to New York or Chicago or such.

You can also check out various events that pop up throughout the year at the official site’s event page.

Exhibits at the Museum of the Rockies

The Museum of the Rockies is a primary center for active research and exploration of the information that can be gained from fossils.

These relics have been discovered across much of Montana and the paleontology department at MOR is dedicated to expanding its understanding of the deep past of the surrounding regions.

Here is one of the largest collections of North American dinosaurs in the world and it includes many examples of the terrifying and gigantic carnivorous Tyrannosaurus rex, along with a growth series of the horned Triceratops between juveniles and giant stages.

Many of these fossils are on display in the museum’s Siebel Dinosaur Complex, where visitors can view the huge mounted T-Rex, one of the few mounted Tyrannosaurus rex skeletons in the United States.

Then there are the bones of ‘Big Al’, an almost completely-formed Allosaurus from the Jurassic Period.

Visitors can see preserved dinosaur eggs and babies, and the museum contains a large collection of prehistoric mammals’ fossils and more, exhibited in the museum’s Cenozoic Corridor.

This particular section is geared towards youngsters up to the age of around eight and is based on the science in Yellowstone National Park.

The exhibition serves as an ideal introduction to some of the wonders of Yellowstone, and kids can get involved in various activities such as fishing on the fishing bridge, setting up camp, and cooking a meal in a miniature version of The Old Faithful Inn.

Interactive tools are incorporated like a geyser that kids can pump up themselves, a fire tower equipped with binoculars, and even a few of the sounds and smells that might normally be experienced in the Park.

The museum’s Paugh Regional History Hall is host to a continuous exhibition related to Yellowstone Country.

This area serves to acquaint visitors with some of the main features and aspects of Yellowstone Country and the surrounding northern Rocky Mountain terrain.

The exhibits are a great way to explore the history of tourism and hospitality in the area and its spread outwards.

One gallery features the stories of park entrepreneurs Charles A. Hamilton and F. Jay Haynes and their business from the end of the 20th century into the beginning of the next.

The exhibit eventually transitions into another theme entirely–Enduring Peoples—as the museum delves into the heritage and culture of the native peoples of Yellowstone Country.

The Paugh History Hall contains exhibits related to tales of the Northern Rocky Mountains through some of the early exploration and past World War II.

The exhibition is a depiction of the cultural and social changes being experienced at that time by local residents, the ranks of which included Native Americans, fur traders, gold seekers, and homesteaders.

Historical artifacts like photographic wall murals and an extensive textile collection are included in the stories celebrating the Museum’s history from its humble beginnings to the campus of a world-class institution.

Taylor Planetarium Journey offers insights into the universe by way of some impressive digital projections onto a 40-foot dome.

The planetarium offers seats on a first-come, first-serve basis, and doors open to allow for seating just 10 minutes before the scheduled show times.

Today the Montana Dinosaur Trail is as popular as ever and the Museum of the Rockies has a prominent role as one of the institutions and museums that are included.

This is a state-wide trail that consists of 14 locations from the Montana Dinosaur Center in Bynum to the Carter County Museum in Ekalaka.

Each location offers a slightly different angle on some of the local historic discoveries related to the fearsome giants that once roamed this planet and particularly it would seem in this region.

Dinosaurs inhabited the earth for over 100 million years, and yet we seemingly know little accurate information about them.

What we do know has come from taking a trip back in time and trying to piece together different aspects. Montana is host to some of the richest dinosaur fossils on the planet, and the state has unearthed some critical discoveries.

The exhibits along the trail—along with various programs and even field digs that are offered –contain some of the best information and artifacts available today for anyone interested in prehistoric and paleontological study.

Other Recreation and Tourism near the Museum of the Rockies

If you fancy combining a spot of outdoor recreation with your cultural pursuits you never have to look too far in Bozeman to find a decent trail or two.

Here are a couple of ideas for trails in the vicinity of the Museum of the Rockies.

This is a short but popular 1.5-mile route that takes you along an old railway line that once stretched all the way to Gallatin Gateway. The rail line somehow got the name Gallagator due to its notoriously slow speed, and it closed up shop in 1978.

After much effort from local community members, the City of Bozeman purchased the land for the purpose of a linear park.

This trail connects the Montana State University campus with Downtown Bozeman, and Langhor Park is another feature along the way.

The diverse yet easy to tread terrain contains community garden plots, a climbing boulder, a natural playground, and a pollinator garden along with a few other diversions.

If you’re looking for a somewhat longer walk, ride, or otherwise, the Gallagator trail connects to other routes south of Kagy like Peets Hill, Lindley Park, and the Highland Glen Nature Preserve to the east.

This 3.9-mile loop trail is reportedly a nice and easy route and runs through a rolling nature preserve on the edge of town.

This hike generally takes a little more than 1 hour on average to complete, and the trail is popular, multi-purpose, and also used for cross-country skiing and mountain biking.

The trail is open year-round and dogs are permitted on a leash.