Montana is quite often referred to as a “Mountain State.” And it’s true that as well as having some of the world’s most famous mountain ranges, Montana is not that close to the ocean. But that doesn’t mean it is a dry state – in fact, it is anything but dry.

The many beautiful bodies of water in the region are quite amazing, especially the rivers of Montana.

Extending north and south through the western terrain of Montana is the Continental Divide of the Rocky Mountains, which separates the area into two drainages, one west-sloping and the other east-sloping.

This means the flowing waters of the state head towards either the Mississippi or the Columbia. Eventually, the rivers flowing west deliver their water to the Pacific Ocean, while the waterways flowing east end up in the Atlantic, specifically the Gulf of Mexico.

So numerous major rivers flow through the state of Montana, and in fact, the rivers in Glacier Country encompass the full spectrum of conditions including calm paths, deep runs, gentle riffles, and a healthy dose of raging rapids ideal for white-water rafting and such like.

And while the rivers of Montana are vastly different, they do share a few common features. They all contain cool and clear water, are surrounded by impressive views, and are easy to access. Not only are Montana’s rivers nice to look at, but many of them have some kind of special significance as well.

So let’s take a closer look at ten of the rivers in Montana.

Make sure to check out our complete list of rivers and creeks at the end of this article. 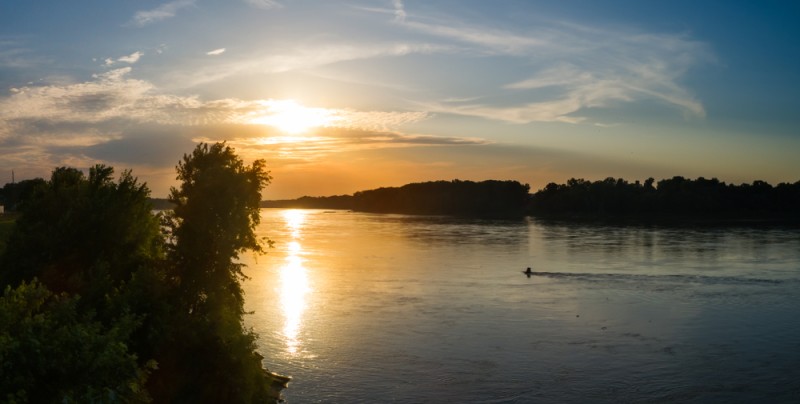 It is probably fitting to start with the Missouri River, which happens to be the longest river in Montana with a total length of 2,340 miles.

This vast waterway is actually the 15th longest river in the world and originates up in the Rocky Mountains in western Montana. The river flows towards the East and eventually ends up in the Mississippi River near St. Louis, Missouri.

The Missouri River has long been significant to Montana natives, not least of all for transportation purposes which help provide food to sustain them thousands of years ago.

The river got its name from the original Missouri tribe, whose name translates as “those with wooden canoes.” The Missouri River ranks as the 15th longest river in the world.

The Milk River is the second-longest river in Montana, with a length of around 730 miles.

The river has something of a unique path in that it originates in Glacier County, and flows toward the East and Northeast before eventually entering the Canadian province of Alberta in the southern regions.

From Alberta the river eventually turns southeast, heading back in the direction of Montana. After passing through the Fresno Dam, and east past Havre, it winds in a north and southeast direction before merging with the Missouri River in Valley County.

The somewhat bizarre name of the Milk River comes from the fact that the silt and clay suspended in the water give it a peculiar whiteness, not unlike the color of milky tea. 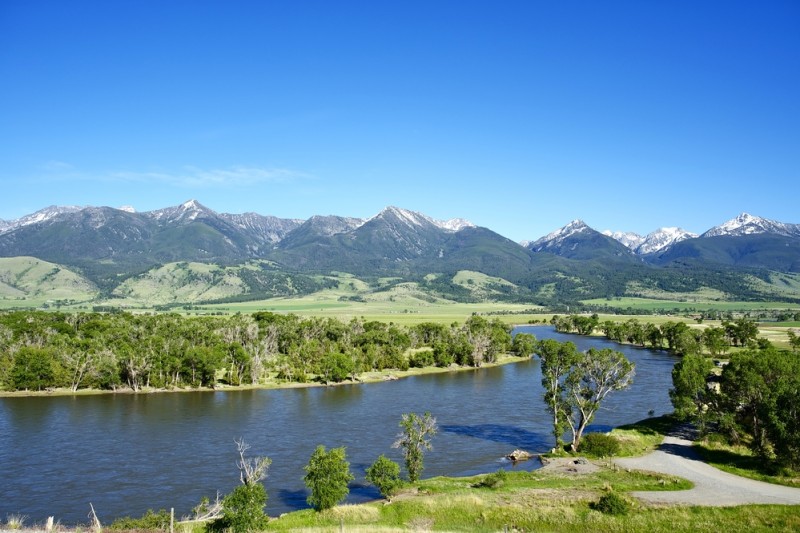 The Yellowstone River ranks as the third-longest river in Montana at just under 700 miles long. Its original source is the confluence of the North and South Forks, and it is a tributary of the Missouri River

The river flows through two other states as well as Montana, namely North Dakota and Wyoming. This is another prominent Montana river in that Native Americans used it as a main means of transport as well as the fact that it was an important source of water for irrigation purposes.

The Yellowstone River runs through Livingston in Montana. It flows from Yellowstone Lake in Yellowstone National Park and is another of the world’s longest remaining undammed rivers. 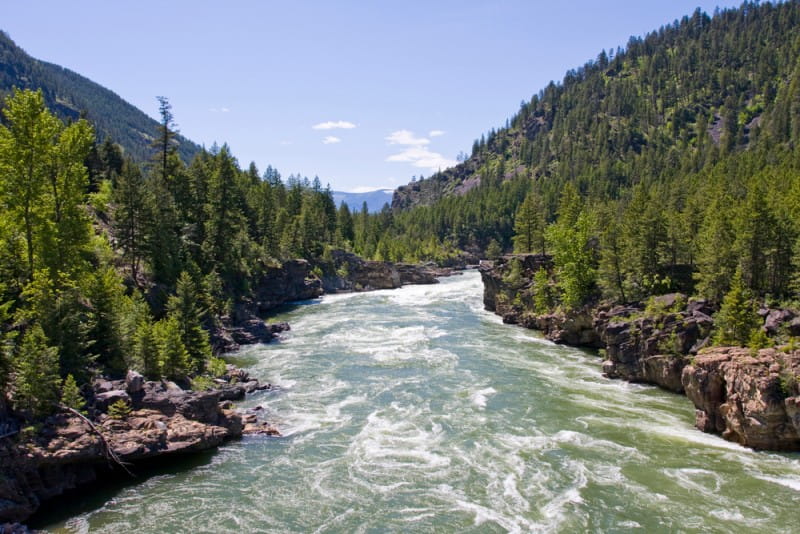 The Kootenai River flows for a total length of 485 miles, placing it as the fourth-longest river in Montana, where it runs into the northwest region.

The river originates in the Canadian province of British Columbia, where the largest stretch of it is contained, and it also passes through Idaho before eventually heading back towards Canada and the Columbia River.

The Kootenai River is the largest river in the North American region that drains into the Pacific Ocean. Various dams have been built along the river to generate hydroelectric power, and the construction of Libby Dam resulted in the creation of the 90-mile long reservoir Lake Kooncanusa. 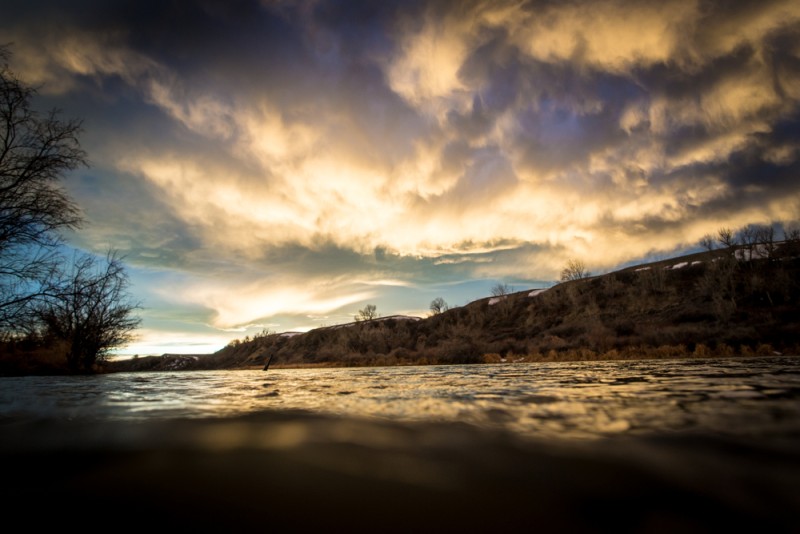 The Bighorn River is a stream of the Yellowstone River and flows through both Montana and Wyoming. It is the fifth-longest in Montana with a length of 461 miles.

The river has three main sections, namely the Wind River which is in Wyoming; the Lower Bighorn River in Montana; and the BigHorn River located in both Wyoming and Montana.

The Bighorn River apparently got its name in 1805 when fur trader François Larocque spotted the bighorn sheep along its banks as he was exploring the Yellowstone region. 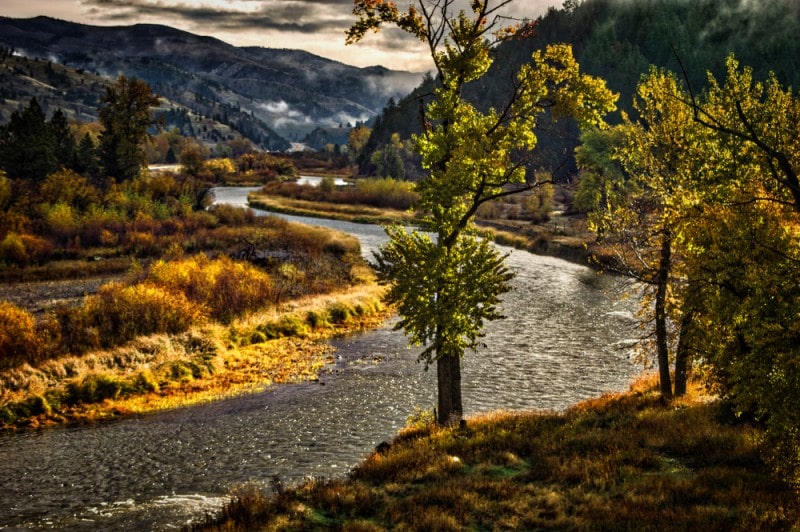 The Clark Fork River stretches more than 300 miles from its point of origin in Southwest Montana’s Silver Bow Creek.

It also runs through Idaho, eventually reaching Lake Pend Oreille in the North. Not surprisingly, the river is named after William Clark the explorer, and it is largely paralleled by Interstate 90 as it runs through Montana.

The Clark Fork River, along with its tributaries, is considered to be one of the prime destinations for fly fishing in the whole of the United States. It has also gained something of a reputation for other water recreation activities such as floating, rafting, and kayaking, and even river surfing.

These activities are particularly sought out in places like Alberton Gorge, west of Missoula. The river also flows through the heart of downtown Missoula, another popular fly-fishing spot. 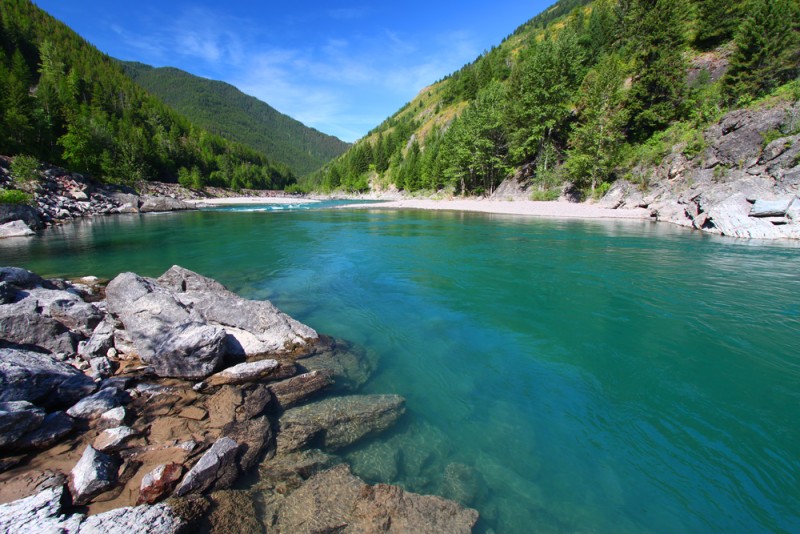 The Flathead River is a unique river flowing along the Glacier National Park’s western boundary in Montana’s north-western region.

It is part of the Columbia River drainage basin and originates in the Rocky Mountains. The river flows into Flathead Lake, although it consists of three different branches. These are the North, South, and Middle Forks, and the river eventually merges with the Clark Fork, also a tributary of the Columbia River.

As Flathead River originates from glacial and snow runoff, it is extremely cold, which makes it ideal for fly fishing. It is in fact a salmon-spawning hot spot, as well as being a Class 1 river in recreational terms.

It certainly comprises some of the most impressive scenery in the state, with all the main sections of the river being designated as National Wild and Scenic.

The Blackfoot River flows for more than 130 miles from the Lincoln region of Montana to Bonner. It eventually connects with the Clark Fork River, and the river’s route sees it wind its way through high alpine meadows and forests.

This makes it a popular river for floating and rafting, as well as fishing, and it benefits from having many points of access.

The Blackfoot River area has been a Native American stronghold for more than 10,000 years and was mostly used as both a transportation route as well as being an area for summertime hunting camps.

It would have served as one of the main routes of travel between the Great Plains and other regions to the west of the Continental Divide, mainly due to the river.

The Blackfoot River was actually poisoned to some extent by mining in the area, but today it is a great place for trout fishing. It is actually considered a prime spot for blue-ribbon trout, although its main claim to fame comes from the fact that it is featured in the book and the movie “A River Runs through It”. 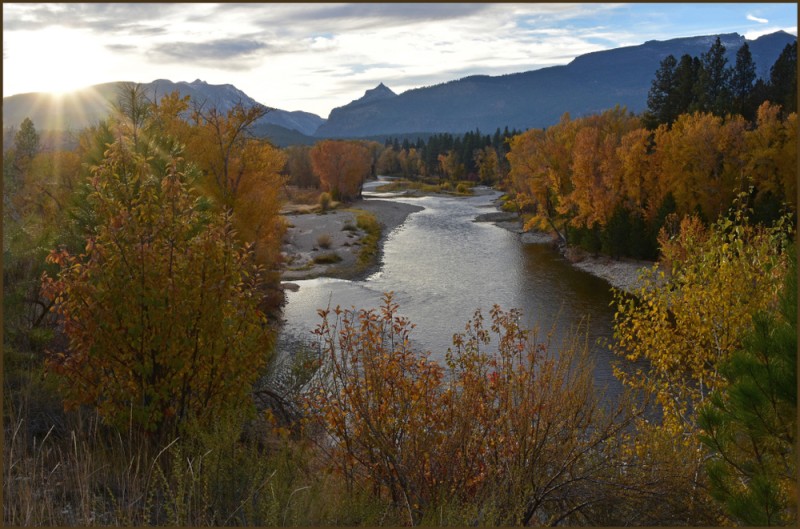 The Bitterroot River begins with the confluence of its East Fork and West Fork near Montana’s Connor.

It flows north through the scenic Bitterroot Valley from its point of origin in Hamilton, and after more than 80 miles it merges with the Clark Fork near Missoula.

The river is very accessible which makes it popular with floaters and rafters, as well as being another of Montana’s fishing hot spots. The river pretty much runs along Highway 93 through much of the valley and flows through some impressive scenery.

On the east side lie the Sapphire Mountains, while on the west side you can see the rising Bitterroot Mountains. 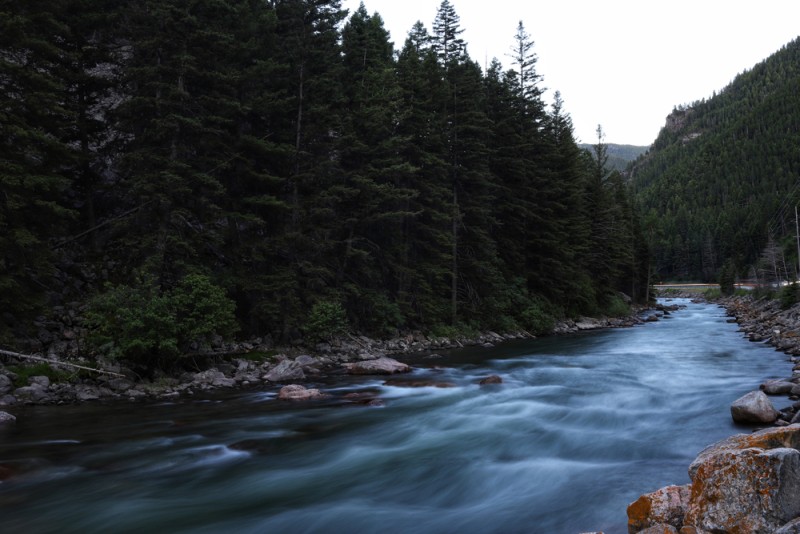 The Gallatin River rises in the Gallatin Range in the north-western corner of Yellowstone National Park in Wyoming and flows 120 miles north to Three Forks in southwestern Montana.

Here it joins its tributary, the East Gallatin, along with the Madison and Jefferson rivers to form the Missouri River. It forms a deep canyon about 70 miles long between the Madison and Gallatin ranges.

The West Gallatin and the East Gallatin converge to become the Gallatin River, just north of Montana’s Manhattan. It has a 20 to 30-mile wide drainage area and flows in a northern direction passing through the Gallatin Canyon, heading toward Montana’s Three Forks.

The East Gallatin River rises near Mount Blackmore and runs through Kelly Creek, Jackson Creek, and other smaller streams, flowing from the Gallatin Mountain’s western slopes. The river is used for irrigation purposes in some areas.

The Many Rivers and Creeks In Montana

Montana is home to an abundance of lakes, rivers, and creeks. Drawing many tourists and locals alike to water sports, fishing, swimming, and boating.

While the Lakes of Montana can draw the largest crowds, the lakes and creeks can offer ample fishing opportunities, moments of rest on a long hike, or a chance to get away from bigger crowds and just connect with nature.

Each river and creek has its own charm and reason for seeking out, so to help you on your exploration of Montana, we have provided a list of the many rivers and creeks you can find spread throughout Big Sky County. 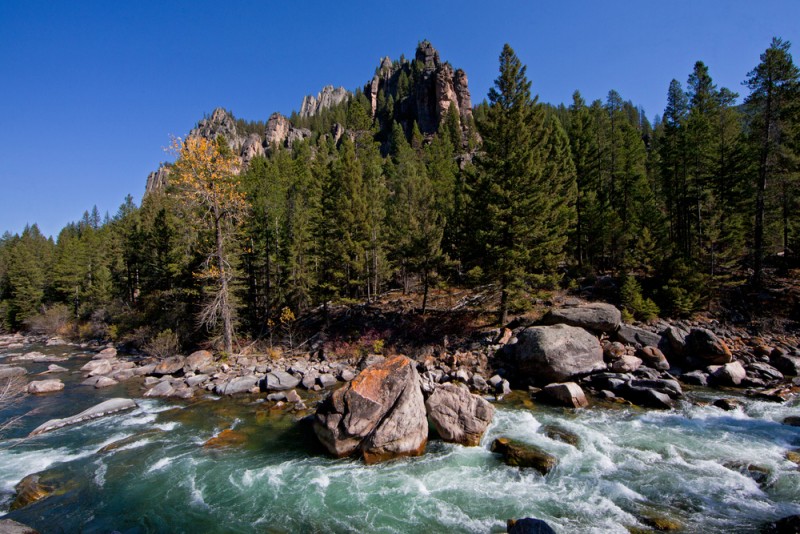