Mainly due to its deep, historical mining roots and culture, Southwest Montana these days is the region where you’ll find a surprising number of ghost towns. Visiting one of these ghost towns is literally like stepping back in time.

The towns are largely in various states of disrepair and ruin but still linger as a testament to Montana’s boom era of gold, saloons, and everything else that went with that. To step foot in one of these places is to experience the quiet, if not eerie solitude, the mystery, and the history of the ghost towns.

Some of these former thriving communities are completely deserted and desolate places that serve only as a historic reminder of the former times in the region. Others, however, remain partially inhabited by various communities based around activities other than mining – although even some of that does still go on in a few of the towns.

Here are our picks for the best 10 ghost towns to visit in Montana, and the top 3 in our list are among the most well-preserved and most popular. 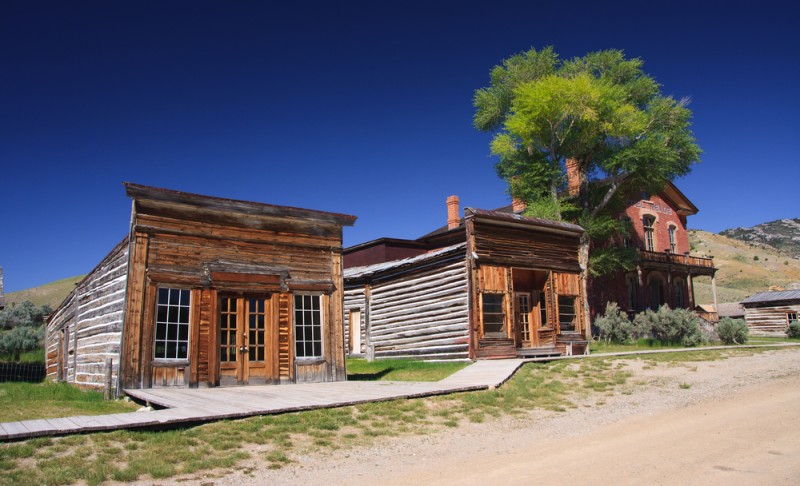 Bannack is a registered historic landmark and marks the region where the first significant discovery of gold occurred. In fact, John White discovered gold on Grasshopper Creek in 1862, and this event triggered the boom that came into full swing a couple of years later.

This spot is 25 miles to the west of Dillon and is also notable for Montana history buffs as the place where the notorious Montana Vigilante group of the time took it upon themselves to combat some of the region’s ensuing lawlessness, and hanged Sheriff Henry Plummer along with a fair few others.

The park today covers around 1500 acres, and over 60 original buildings and other structures still stand in this state park, which hosts ‘Ghost Walks’ around October time. There are also camping facilities and other amenities available in the park, which get busy during peak tourists season. 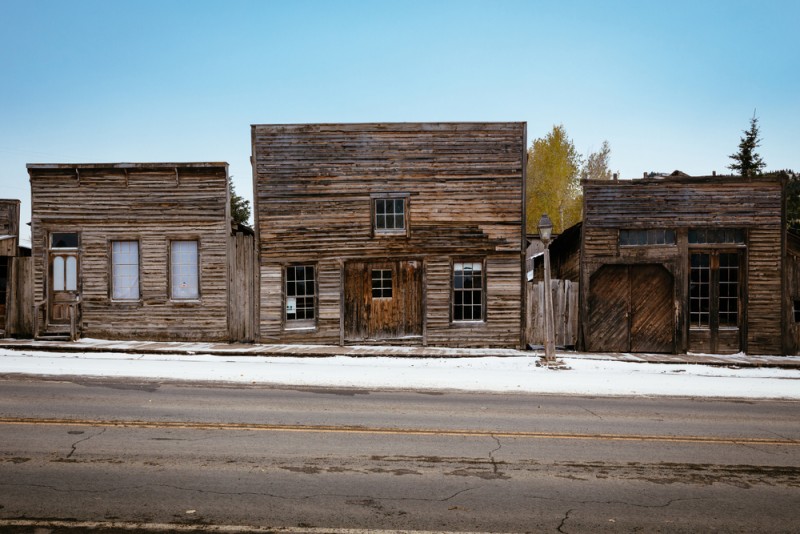 Virginia City is another unique local treasure that was registered as a National Historic Landmark in 1961. It first came to be in 1863 in the midst of another of the region’s western gold rushes, with the appearance of a few thousand fortune hunters. It became the territorial capital until around the mid-1870s when the boomers moved on to different locations in search of new treasure.

The city gained a reputation for its ‘lawless’ way of excessive living that the inhabitants seemed to grasp along with their burgeoning wealth. This can be seen from some of the remaining structures today which are the remnants of former saloons, brothels, and gambling dens rather than churches or schools.

The Virginia City of the past still survives today through a small community of around 150 that resides in the formerly gold-laden hills and gulches of Alder Gulch. The town has an authenticity to it that modern visitors seem to love, and the more historic buildings and structures provide many activities for tourists. These include theaters, steam train rides, stagecoach rides, and gold-panning, to name a few. 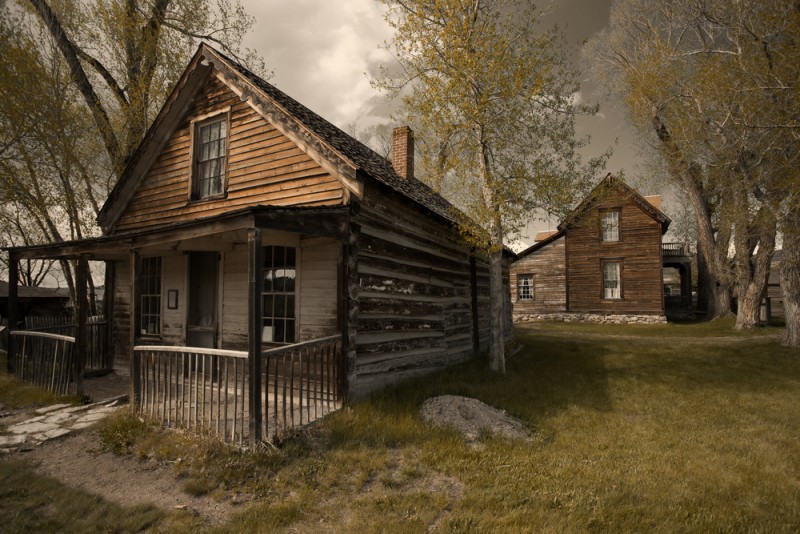 Nevada City was a properly derelict former mining ghost town until undergoing restoration between 1945 and 1978. The entire town is today a historical museum with over 100 original buildings and is a famous tourist attraction.

Many of the original log buildings still exist, as does an impressive collection of artifacts from the period by way of old-time music boxes, player pianos, and such. You can ride the railroad to closely-located Virginia City from this Montana ghost town, as well as pan for gold or witness a live historical re-enactment on one of the summer ‘Ghost Walks’. 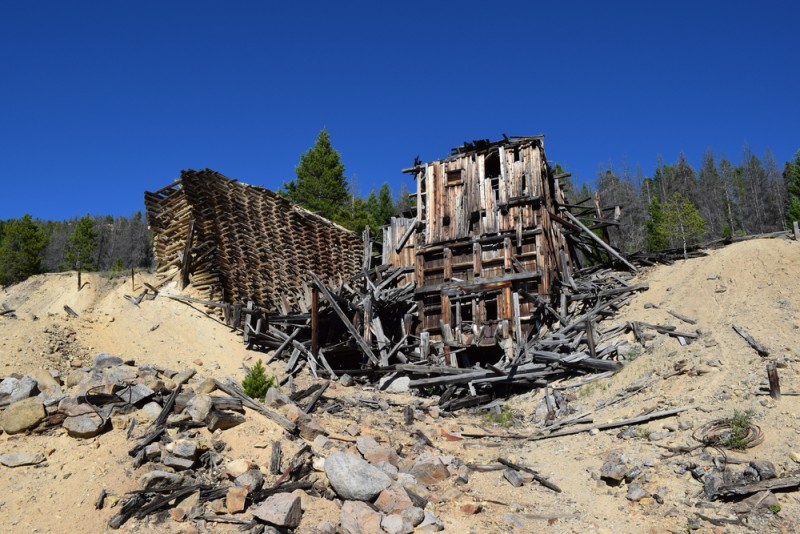 The silver mine in Granite that made this town famous was first discovered in 1872, eventually becoming the richest vein on the planet. It was almost shut down as a useless venture until one of the last dynamite blasts unearthed a massive and rich yield.

The population of the town was as high as 3,000 at its peak of operation, although it started to dwindle during the latter years of the 1800s, and eventually, the mine was closed down.

Today there is no one living in the camp and the area serves as one of the best of all Montana’s ghost camps. Some of the original structures still exist and the structure of the Miners’ Union Hall still stands, although in a state of real disrepair.

Most of the other existing constructs have reached the same end, and the union offices and ground-floor saloon seems ready to collapse. The original company hospital still stands, as do a few other structures, and this place is well worth a visit by anyone interested in ghost towns in Montana. 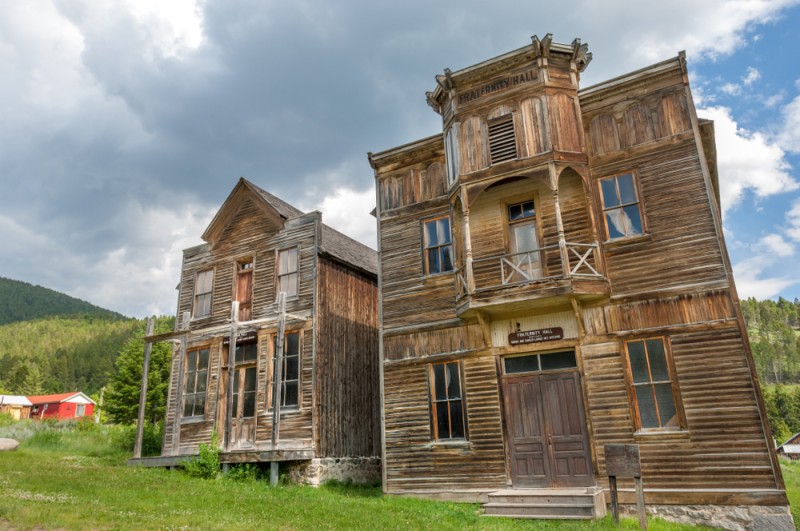 The mining town of Elkhorn is 18 miles from Montana’s Boulder. Like many of the other ghost towns, it hit its peak in the late 1800s. By that time it had become a bustling hotbed of which had its share of residences, hotels, and entertainment venues, along with a post office, a school, and a church, unlike some of the other notoriously lawless communities.

Although this ghost town also qualifies as a state park due to its historical value, it is actually one of Montana’s smallest. It is comprised of just a Fraternity Hall and Gillian Hall even though they are impressive artifacts of the town’s past. There’s also a cemetery just uphill a little distance from the town, which provides a few insights into the difficult conditions of the day.

The backcountry roads that approach the deserted settlement lead you into the historic, 19th-century mining landscape. The region is now privately owned, and it does paint a quaint scenario of the early silver mining towns of Montana, even with just these two existing structures which are some of the better-preserved examples of frontier architecture that still exist.

Marysville was once a thriving Montana gold-mining town in Lewis & Clark County, 21 miles from the capital of Helena. However, although the gold-rush days are long gone, in this town there remains a small community of around 100 people. It’s certainly nothing like it was in the heady boomtown days when Irishman Tommy Cruse’s famous Drumlummon Mine struck rich, leading Marysville to become the leading gold producer towards the end of the 19th-century.

The town is far from being deserted though, and some mining even still goes on here. The original mine was closed in 1904 but there have been reports of fairly recent new discoveries. Several original buildings now listed on the National Historic Register are still standing, and there are a few things to see in this Montana ‘semi-ghost town’. The historic Episcopal Church still operates within the community, and there is also a baseball field.

Garnet struck rich in the last five years of the 19th-century when miners uncovered a rich vein in the mountain community that was formerly known as Mitchell. Like many of the other ghost towns though, once the supply looked like running dry the miners upped sticks faster than you could shout ‘goldrush’.

What they left behind was a deserted town which today is represented by more than 20 buildings that still stand in Garnet Ghost Town. In the summer, which is high season as far as visitors go for most of Montana’s ghost towns, visitors are allowed to wander around inside them.

Should you wish to drop into this particular ghost town during the winter, the only way is either by cross-country skiing, snowshoeing, or a snowmobile. 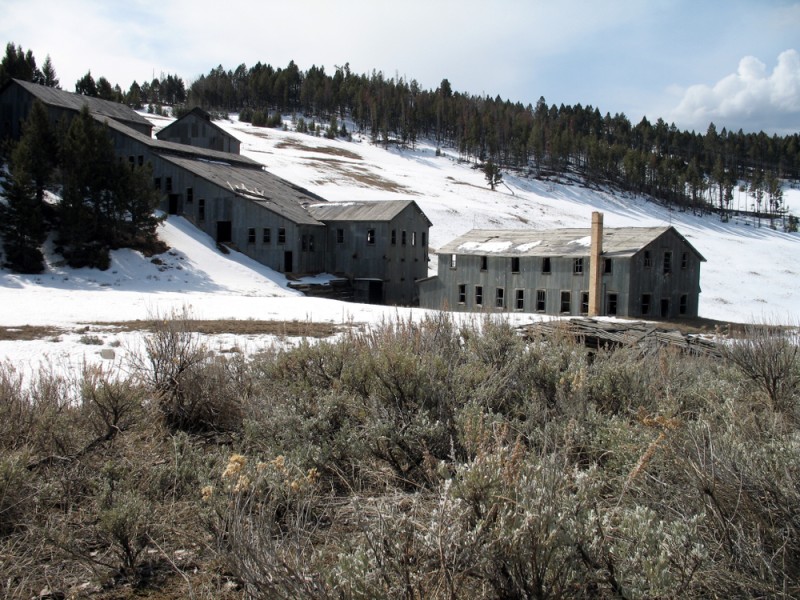 The town of Comet appeared up in the Montana Mountains around the same time as the other mining towns, in the late 1800s. Located 30 miles to the south of the capital Helena, the population reached around 300 in its heyday.

Also like the other boom towns of the same era, most of the activity in the town was focused around the mine responsible for the forthcoming riches. Reportedly the mine churned out over 13 million dollars worth of silver and gold, along with other precious metals like copper, lead, and zinc. The supplies were all but depleted by the end of the First World War.

Comet has been ranked as the third-best ghost town in Montana by a prominent guide, and the town’s somewhat unique tin-sided mill is a focal point of the ghost town. Along with the other buildings it can be found on what is now private land, and there is more information about the town in the nearby Heritage Center in Boulder. 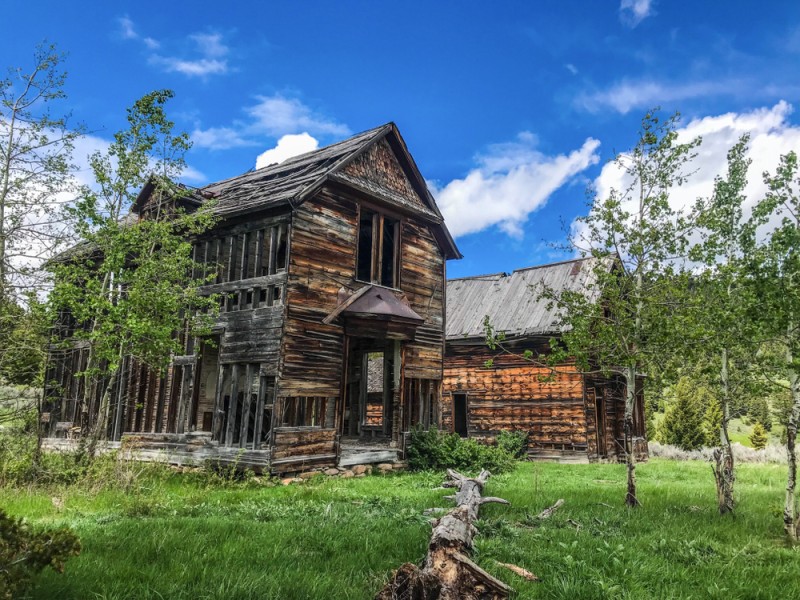 Castle Town wasn’t founded until 1891 but had a fair-sized population of around 2,000 within a couple of years.  It had the usual array of saloons and brothels for the hordes of miners that descended on the area, as well as the obligatory jail. There was also a school, and various other shops though, and many of these buildings are still standing in a scenic-looking gulch.

Castle Town is another one of the mining boom towns that went under after the ‘Silver Panic’ of 1893. Apparently, this town was also the home at one point of the famous Western character ‘Calamity Jane’.

You can actually get some good views of this Montana ghost town from the road, but it is also now privately owned so permission is necessary before going any closer. You can learn more about the town in the nearby Castle Museum in White Sulphur Springs though.

Kendall was something of a late bloomer as a Montana mining boomtown, appearing in the North Moccasin Mountains in the first few years of the 1900s. Certainly, gold had been found in the region in the late 1800s, but any attempts at mining were unable to get into full swing until a mill was installed in 1900, which is when the town ‘took off’.

The population of the town reached about 1,500 people before the majority of them moved on to nearby Hilger which became established around 1911 and had the added advantage of being located on the rail line. Kendall had a couple of hotels, banks, restaurants, a school, and the regulatory saloons and brothels.

The interpretive signs at this Montana ghost town are good and the existing structures and ruins are impressive in historical terms, although there are only 3 of the original stone buildings standing. Many of the other buildings have collapsed over the years due to the mine shafts below them, but Kendall is still worth a visit for its ghost town pedigree.

With Montana’s rich history in the wild west and mining, there are many ghost cities in the state. Not all these locations can be visited, and some show no remnants of their past.

For those curious to visit as many ghost towns as possible, here is a list of them all.