As the only undammed river in the lower 48 states, the Yellowstone River flows a total of 692 miles which takes it through Wyoming, Montana, and North Dakota.

The river rushes over the Upper and Lower Falls of the Grand Canyon before coming into contact with its largest tributary, the Lamar River at Tower Junction before exiting the national park near Gardiner.

The Yellowstone River continues through the state in a north-westerly direction before finally joining the Missouri River near the eastern state border.

The Missouri River eventually joins the Mississippi River which in turn merges with the Atlantic Ocean at the Gulf of Mexico.

The History of the Yellowstone River in Montana 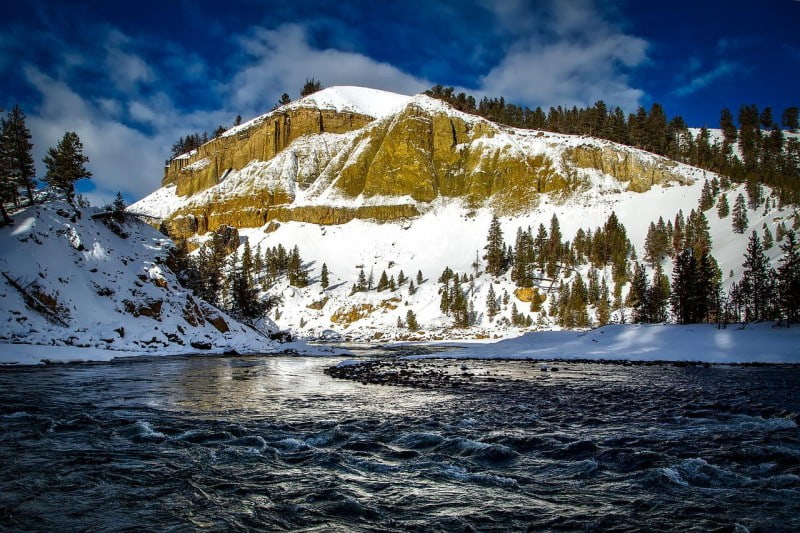 Native Americans had long made use of the river before any western explorers or traders appeared in the region in the 1800s.

Elk River was actually one of the names the natives used when they referred to the river, and it wasn’t until 1806 when the Lewis and Clark Expedition made its way back from the Pacific Northwest that any expedition of European descent had encountered what is now known as the Yellowstone River.

Plenty of others followed suit over the years after deciding to further probe the regions and characteristics of the river, including famous names in exploration like John Colter, Jim Bridger and Jed Smith.

These later visitors to the area explored Yellowstone’s waters with the aid of all manner of boats or vessels available to them.

John Colter was actually responsible for helping to set up the first trading post along the banks of the Yellowstone River after partnering up with a fur trader, which was first established just a year after the Lewis and Clark expedition had ventured through the area, at the mouth of the Bighorn River.

Settlement in the area was boosted by the arrival of the Northern Pacific Railway in the early 1880s when the river began to be developed extensively for the purpose of irrigation. 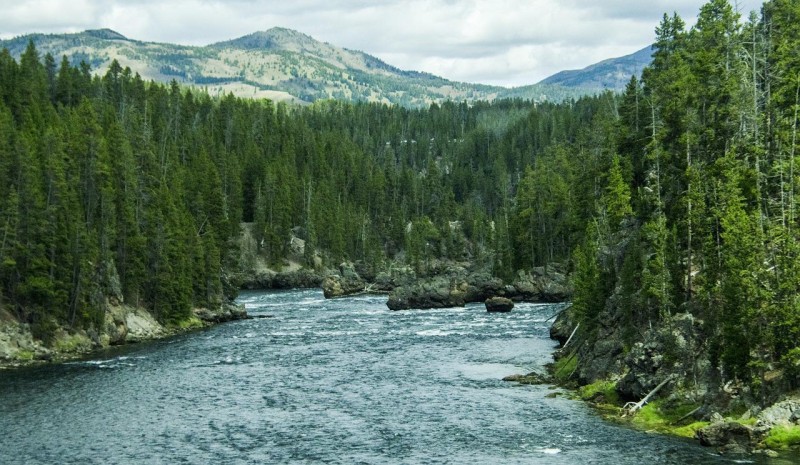 A huge amount of agricultural land comes under the Yellowstone River Watershed, with much of the water being stored in the snowpack that falls throughout the winter.

When it melts in late spring and early summer it feeds the river, just in time for some much-needed watering.

It’s not uncommon to see farms and ranches anywhere along the regions of the Yellowstone River and its tributaries. These operations rely on the river for the irrigation of crops such as wheat, barley, corn, and sugar beets, while ranchers focus on raising cows, pigs, sheep, horses, and chickens.

Still, many other farms are too far from the river to allow for any irrigation, which means they are more likely to practice dryland farming, using some stores of water from the river while also relying on rain. 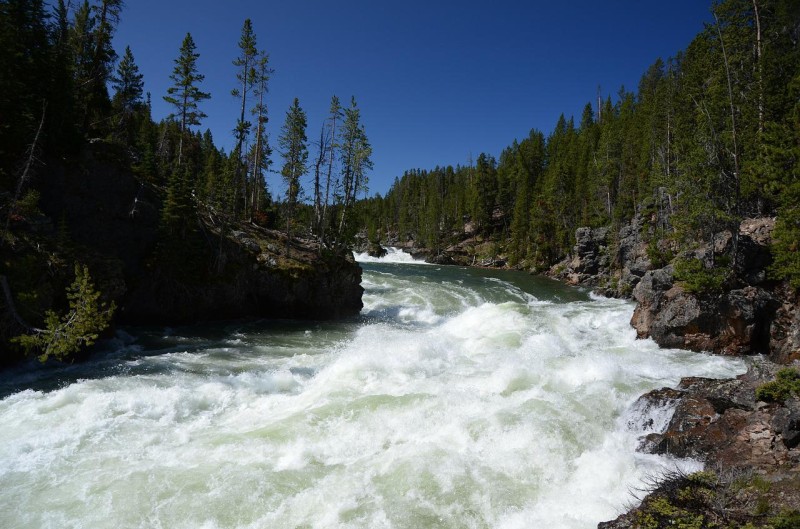 Outside of Yellowstone National Park, the river covers more than 500 miles that are generally compartmentalized into the upper, middle, and lower regions, although with no formal definitions.

Starting out as white water as it leaves the national park, the upper section of the river is super-clear and cold. The water slows down and mellows out somewhat as it flows downstream towards the Missouri River confluence.

The upper section of the Yellowstone River in Montana is the most renowned stretch in terms of trout fishing.

The fast-flowing clear water has the ideal conditions for various trout fishing scenarios, and the stretch of river running from the national park to Billings or somewhere near is considered the main part of the upper river, at least from a fishing perspective. 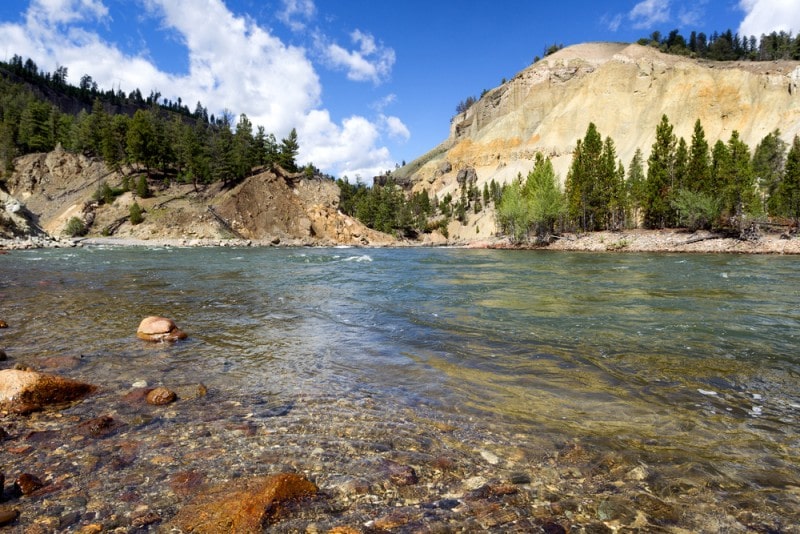 What is loosely defined as the mid-section of the flowing river presents a different scenario as things begin to slow down and get bigger.

The middle stretch of the river has more of a prairie river feel to it than a mountain stream and it loses much of its crystal clearness as it begins to get murkier and also warmer in this section.

The gradient is low along this region of the Yellowstone River and the rocky bottoms that were common upstream have gradually been replaced by sand and mud.

The water holds a diverse range of species here but the trout fishing is not generally deemed to be of the same caliber as it was further upstream. Here the fish with a preference for a warmer flow are more prevalent, particularly bass, sauger, and paddlefish.

This stretch of the river remains mostly wild and undeveloped, which means more likelihood of catching sight of more wildlife and birds. 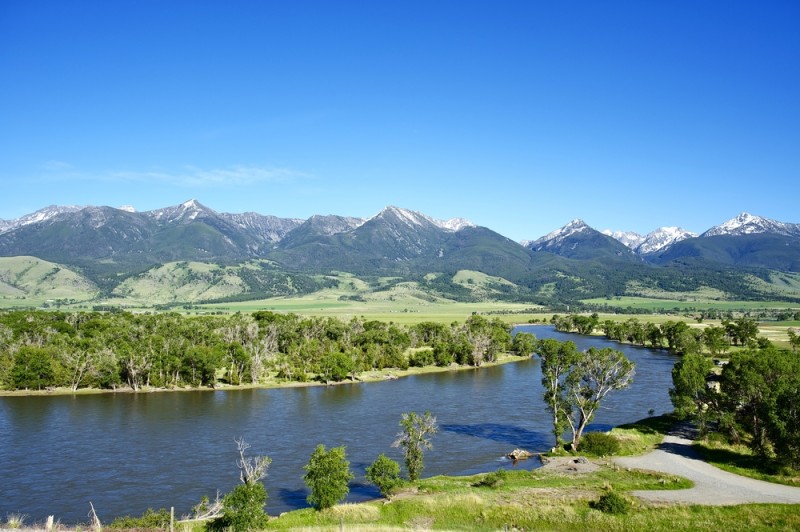 When the middle section of the river begins to meld with the lower section it becomes yet more slow-moving and murky with mud from the bottom.

The fish species in this stretch are now far more likely to be warm water varieties, and the fishing potential in this area of the river once again gains momentum.

The features of the river in this area include gravel shelves, slow pools, and long rapid runs, as well as several large islands responsible for smaller channels often quite productive in terms of fishing.

The absolute lowest section of the river is actually in oil-producing terrain, which means it is not that uncommon to see operations near the riverbanks, especially once the river has entered the vicinity of North Dakota.

In fact, there are still somewhere in the region of 30 mines still operating throughout the Yellowstone River Watershed.

This is generally an area where the river valley is a lot more open and the mountain views seem quite a bit more distant than along some of the other stretches. 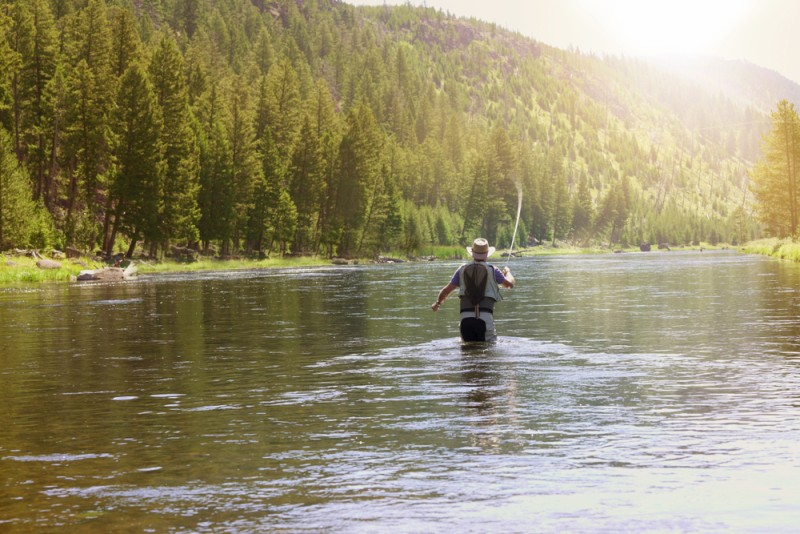 The Yellowstone River in Montana is generally rated as excellent by the majority of anglers heading to the state for a spot of fly fishing for trout.

The river offers over 200 miles’ worth of top-notch trout waters which include various characteristics and fish species.

This is the habitat of some rather large brown, cutthroat, and rainbow trout, but the water is actually so diverse in terms of species and habitat that it offers some top dry fly fishing as well as subsurface fishing.

Although wade fishing is an option in some areas of the river, its sheer size—not to mention its variation and diversity—makes the waters ideal for raft and boat fishing.

Largely due to the length of the river it is possible to find high-quality trout fishing from the region of Billings all the way upstream to Yellowstone National Park.

Anyone heading to Montana to fish the Yellowstone River soon comes to the realization that any problems that they are likely to encounter are most related to the decision of exactly where to begin.

The best advice from those who know the river is to focus only on a small stretch rather than driving up and down adding mileage by trying different spots—of which there are virtually unlimited options.

On top of that, it is better to have a clear idea of what, where, and how you fish beforehand or you are likely to be influenced by the outstanding scenery along the river—which of course might not necessarily be the best location fishing-wise.

But of course, the landscape is also one of the main factors contributing to the Montana fly fishing experience, so ideally you’ll be able to locate a scenic peg that is also productive with a little background checking first.

A good example of a prime spot along the river is the Carbella access site to Livingston, which runs through the incredibly scenic Paradise Valley with its picturesque vistas of huge peaks and some solid trout fishing. This stretch also happens to have the most fishing pressure.

Camping along the Yellowstone River 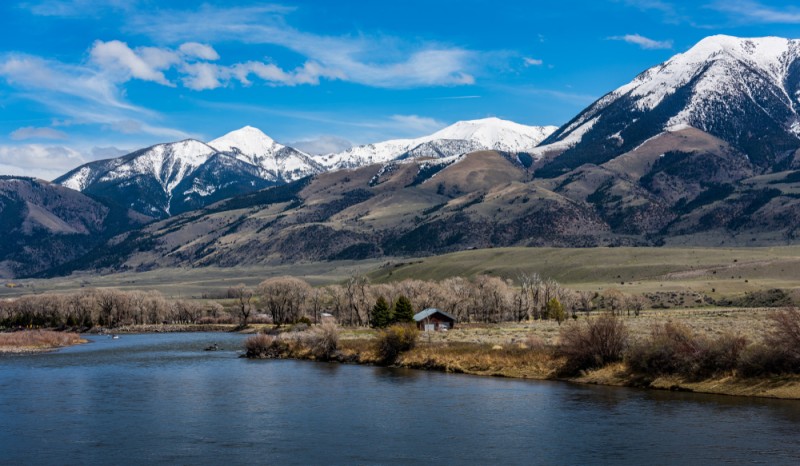 Not just fishermen but explorers of the region, in general, will attest to the fact that a great way to experience the Yellowstone River is by camping.

There is ample opportunity for this pursuit but if you have a clear idea of which stretch of the river you are interested in exploring you can narrow things down a bit.

Between Gardner and Billings you will find plenty of public campground sites, although in a lot of the areas along the river the land tends to be privately owned, which means the necessity of gaining permission first.

There are a few fishing access sites along the river with camping options.

The Yellowstone River RV Resort and Campground is in Billings and is open year-round. The facility accepts bookings and is close to an exit off I-90, with plenty of access to all kinds of amenities and attractions.

This is a family-operated business that has been established for more than a century and is a typical example of some of the best camping on offer in Montana close to the river.

For those looking to make trips to the Yellowstone River a part of their vacation but wanting not willing to camp, there are plenty of options that you may want to consider when visiting.

Besides being the biggest city in Montana, Billings is close to the Yellowstone River as well as several other communities and areas that offer easy access to the area. Check the list of accommodations in Billings here.

For a smaller town experience/stay you can browse available accommodations in Gardiner or Livingston which also offer opportunities to experience the Yellowstone River.

Other Recreation and Tourism along the Yellowstone River 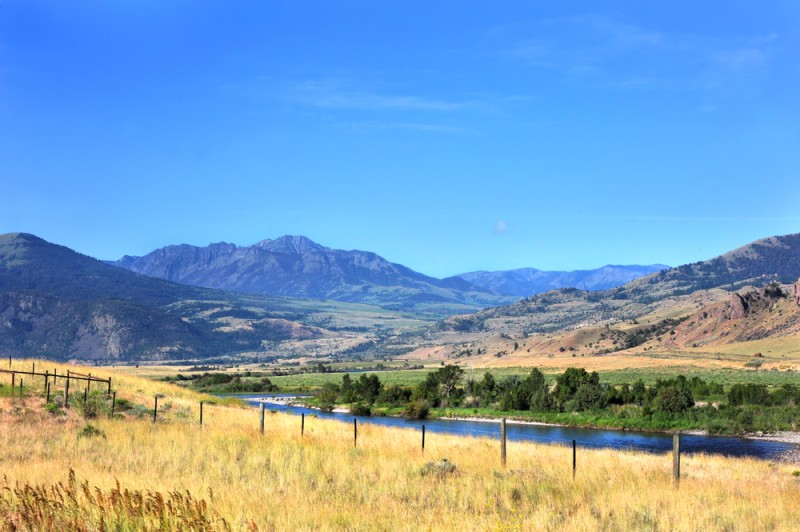 As the river’s headwaters are in a Montana national park that draws in around 3.5 million visitors every year, and the river forms part of many other recreational pursuits and as it flows from the park more options become available.

Rafting and kayaking are popular pursuits along the river and farther downstream many smaller communities within the vicinity of the water draw tourists interested in dinosaur fossils.

On top of the outstanding recreational opportunities within Yellowstone National Park, there are also a few state parks as well as local parks and campgrounds along the river.

As the river flows north out of the park, through Gardiner, and onto Livingston, this stretch is what many believe to be the most visually impressive section of the Yellowstone River.

As it descends out of the park, winding its way between the Absaroka and Gallatin Mountain Ranges through Paradise Valley, you can find some awesome white-water rafting opportunities.

Continuing on through the town of Gardiner and past Yankee Jim Canyon, there are some truly breath-taking adventures to be pursued, on top of some of the best fly fishing in the country.

Montana’s Yellowstone River is one of the longest and most diverse rivers running through the state, which is demonstrated by the fact that the river’s upper sections are the location of some world-class fly fishing and recreational floating, while the middle and lower sections are still for the most part wild and undeveloped.

It is said that many areas remain unchanged since the days of the first explorations into the area by the famous Lewis & Clark expedition. The Yellowstone River is so amazing that you’ll reap some fine rewards in scenery and recreation-wise whichever part you decide on exploring.