The Stillwater River is a 70-mile tributary of the Yellowstone River stemming from the Absaroka-Beartooth Wilderness in Montana.

It flows from the mountains to Yellowstone in Columbus, providing picturesque scenery and several abundant fishing spots along the way as it cuts across the prairie and canyons beyond the wilderness area.

What is the History of the Stillwater River?

In the past, the Stillwater River has had a variety of different names, including Rose River, Rosebud River, Itchkeppearja River, and Stillwater Creek.

Columbus, near where the river feeds into the Yellowstone, is the ancestral homeland of the Apsaalooké people, otherwise known as the Crow.

The town was founded by white settlers as a stagecoach station along the Yellowstone River and has previously been called Sheep Dip, Eagle’s Nest, and Stillwater.

It originally produced large quantities of sandstone which was used to build the Montana State Capitol in Helena. 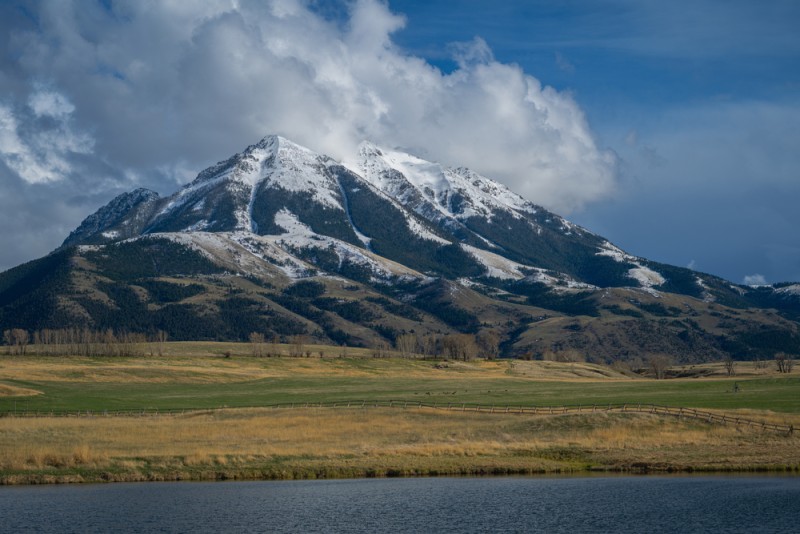 The Stillwater River originates south of the Beartooth Mountains in the Absaroka-Beartooth Wilderness, in Park County. The river rises near the Wyoming state line and the boundary of Yellowstone National Park.

It flows in a north-easterly direction, cutting through the Absaroka Range and the Beartooth Mountains on either side to flow through the Custer National Forest.

The river then flows past Nye and Absarokee before joining the Yellowstone River near Columbus, Stillwater County, Montana.

The river contains Class III rapids and is fast-moving for nearly its entirety, creating an ideal environment for rafting. It also features a rocky bed along nearly all sections of the river.

What Is There to Do Around the Stillwater River?

Camp in the Countryside

The landscape surrounding the Stillwater River is so naturally beautiful that most visitors take the opportunity to bask in it for as long as they can.

Camping is one of the most popular activities in the area, with many guests choosing to stay at the Woodbine Campground which lies on the banks of the Stillwater, near the community of Nye.

The campground boasts 44 sites and operates on a reservation-only system. Given that the campground is especially popular in the summer months, it’s a good idea to book well ahead of time, with reservations opening six months in advance.

However, if you do end up making a last-minute decision to camp at Woodbine, they also accept reservations just 24 hours in advance—if there are vacancies.

There are accessible toilets available at the campground as well as firewood available for purchase and a bear-resistant trash dumpster. The maximum length of stay is 16 days.

Hiking is a natural pastime around the Stillwater River, and there are at least two major trails located within close proximity: the Stillwater Trail and the Woodbine Falls Trail.

The Stillwater Trail is 26 miles long in total, beginning at the trailhead along the river and then weaving to Sioux Charley Lake.

The trail passes several other highlights, including Flood Creek and Tripod Hill, before arriving at the Lake Abundance Trailhead. Along with hiking, visitors enjoy horseback riding along the trail.

There are also several other trails that stem from the Stillwater Lake Trail, including Gorge Bypass and West Fork Stillwater.

From the Woodbine Campground, the Woodbine Falls Trail is a 1.5-mile round trip. It is one of the most popular trails in the area thanks to the stunning views of Woodbine Falls, a 260-foot waterfall, and can be completed in around an hour.

When it comes to wildlife-viewing opportunities, no state comes close to Montana.

There are locations all over the state to witness animals in their natural habitat, including the Absaroka-Beartooth Mountains, where you can see grizzly bears, wolves, elk, deer, bighorn sheep, mountain goats, and other creatures roaming free.

Travelers can explore the Absaroka-Beartooth Mountains on foot, on horseback with a guide, or via a scenic drive. Chief Joseph and Beartooth Highways offer world-class views of the rugged scenery and wildlife residing among the trees, streams, and cliffsides.

Explore the History of Columbus

For history buffs, one of the best things to do along the Stillwater River is visiting Colombus and check out the old quarry. While you can’t visit the quarry anymore, you can view it from I-90, to the northeast of the Columbus interchange.

Sandstone mining is deeply ingrained in the legacy of Colombus. The old quarry generated sandstone that helped shape the Montana State Capitol in Helena into what it is today.

The Museum of the Beartooths is also a must for those interested in the history of Stillwater County.

The exhibits in the museum paint a picture of what life was like in rural Montana in previous eras. The museum also highlights the achievements of notable historic people in the area, including Native Americans, miners, rodeo stars, and heroes from the Second World War.

The museum runs private tours, although these usually need to be scheduled in advance, and there are also historic buildings on the grounds, including a blacksmith, a tack shop, and an old schoolhouse.

Can you Fish in the Stillwater River? 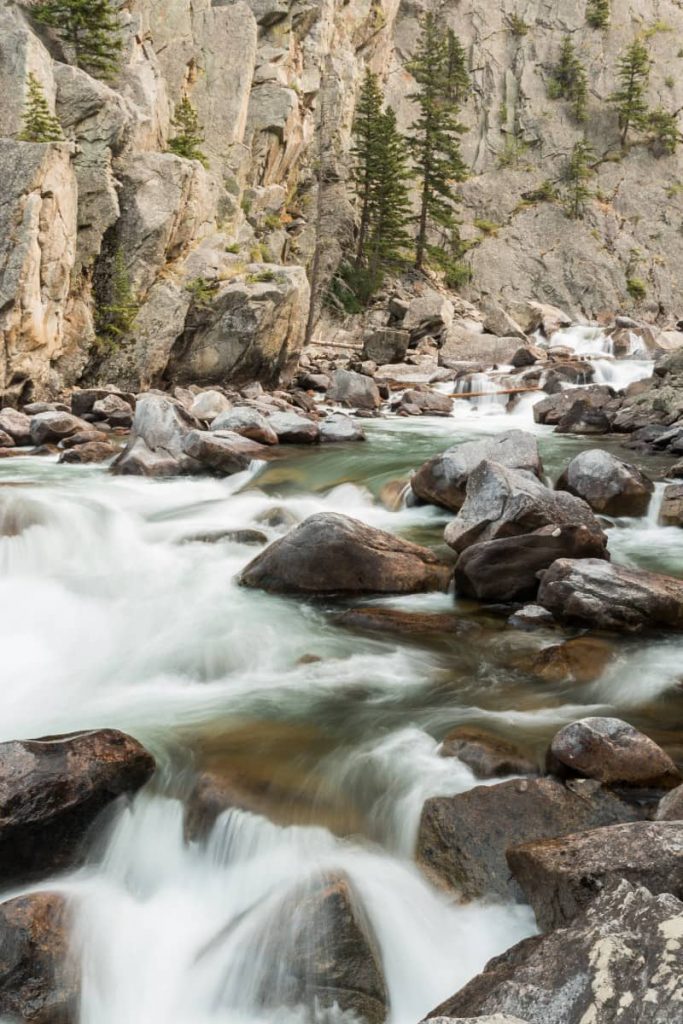 You definitely can fish in the Stillwater River, which boasts some of the best fly-fishing in the state during summer. The river produces large numbers of big fish and is best navigated with rafts due to the presence of rocks and swift currents.

There are other quality fishing locations nearby, including the Boulder River, but anglers may choose Stillwater because of the stunning scenery, high population of trout, and low fishing pressure.

Note, that a portion of the river does pass through private property, but there is still sufficient public access.

The fish species residing in the river include cutthroat, rainbow, brook, brown, and golden trout. When it comes to fishing in the Stillwater, anglers can wade in amongst the rocks—which are known to be slippery—or float the river once it flows out of the wilderness.

Can you Swim in the Stillwater River?

The Stillwater River isn’t the best Montana river for swimming due to its tumbling nature. Despite its name, the waters are too rough for most people to swim in.

The river has significant portions of white water and large drops, in addition to a fast current. It’s also plagued with lots of rocks.

Though swimming isn’t ideal in the Stillwater River, many travelers enjoy other water activities on the rapids.

Companies like Absaroka River Adventures run river trips on the Stillwater, including leading floats to the Upper Stillwater where the Class III rapids create an adrenaline-packed experience.

Given the speed of the currents and the intensity of the rapids, all rafters on the Stillwater should wear a life jacket, even if they consider themselves to be strong swimmers.

The Stillwater River contains all types of water, but it is mainly made up of swift white water and rapids (Stillwater Anglers).

The river slows down below the community of Nye, however, only the experienced should attempt to float it due to the rapids. Fishing is the best in the Stillwater River from spring through fall.

Despite its fishing opportunities, Stillwater does not receive as much fishing traffic as other more well-known rivers in Montana, like the Yellowstone, Bighorn, or Madison. This often results in a larger population of rainbow and brown trout.

With its heavenly views, thrilling rapids, and plentiful fishing opportunities, the Stillwater River is one of Montana’s greatest hidden gems.

Camping and hiking along the river offer some of the best rural experiences in the state, allowing travelers to immerse themselves in the great outdoors of Big Sky.

Have you ever visited the Stillwater River? Let us know in the comments below!