The Flathead River in Montana has large and swift drainage that runs from and through a few major northwest regions of the state.

The river starts out past Glacier National Park up in the Rockies and has three branches. It flows swiftly through some of the best scenery in the state including the Bob Marshall Wilderness Complex as well as the national park. The three branches conjoin between Glacier Park and Columbia Falls to form the larger Flathead River as we know it.

Largely due to its route through some prominent Montana landscapes the river serves as a point of attraction for water-based like fishing, rafting, and other surrounding recreation.

A Guide to the Flathead River

The Flathead River runs 158 miles, it is a large part of the Montan landscape that offers an abundance of activities. We will take a closer look at the river. 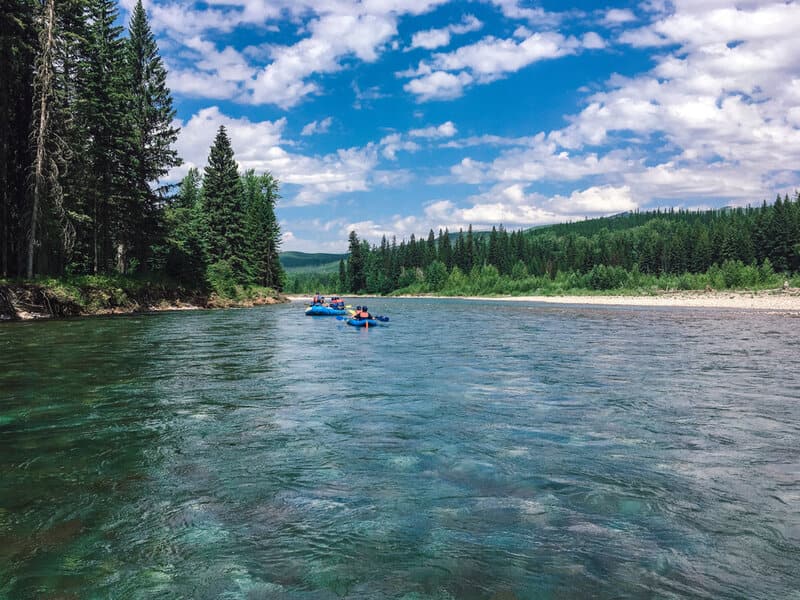 The History of the Flathead River

The North Fork of the Flathead River has been attracting visitors for more than a century due to its plentiful supply of fresh water, as well as the surrounding opportunities for animal trapping and timber.

However, after years of failing to come to any kind of proper agreement which also focused on a planned dam in the area, the idea was instead abandoned in favor of the Hungry Horse Dam on the South Fork River.

This dam was constructed in the 1950s, and in 1975 the North Fork was declared a National Wild and Scenic River.

Geography & Stats of the Flathead River 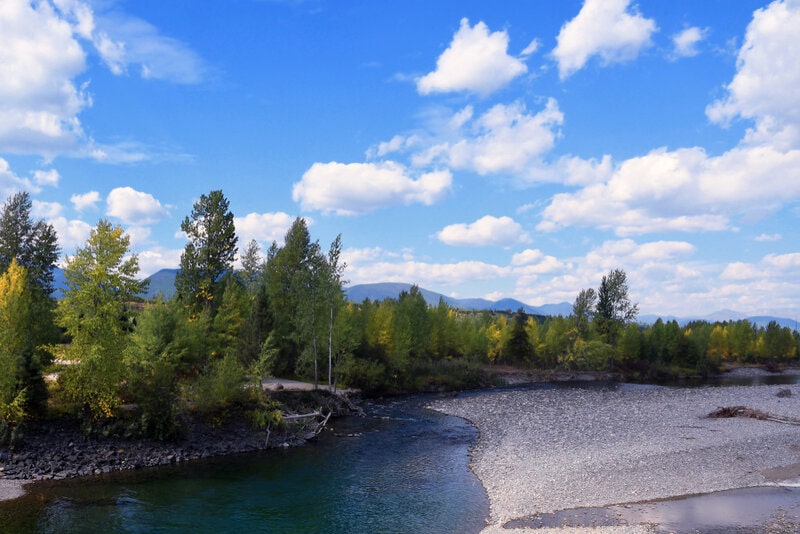 The Stillwater River also joins the main flow of the Flathead River not long after Flathead Lake, slightly to the north.

The Hungry Horse Dam resulted in the reservoir on the lower end of the South Fork of the river. The Flathead River most people know begins with three branches and the river splits into two other distinct rivers separated by the 28-mile long Flathead Lake. It ends at the confluence with the Clark Fork in the Plains regions.

The larger Flathead drainage, (excluding Glacier Park waters) measures 3,771 miles in length and is home to popular and scenic towns like Kalispell and Whitefish.

The Flathead River itself is over 200 miles long from its northernmost point to where it meets the Clark Fork River northwest of Missoula.

The Middle Fork of the Flathead River inspired the Wild and Scenic Rivers Act, and all three forks of the river now have designation under this act. There are a total of 97.9 miles of designated Wild River, 40.7 Scenic, and 80.4 Recreational from the complete stretch.

The 150-mile-long North Fork River runs the wildest, with just one settlement on the east side of the river by way of Polebridge. A lot of the river’s surrounding terrain has slopes with gradients greater than 60%. The more moderate slopes tend to be lower in elevation.

The River’s Route Above and Below Flathead Lake 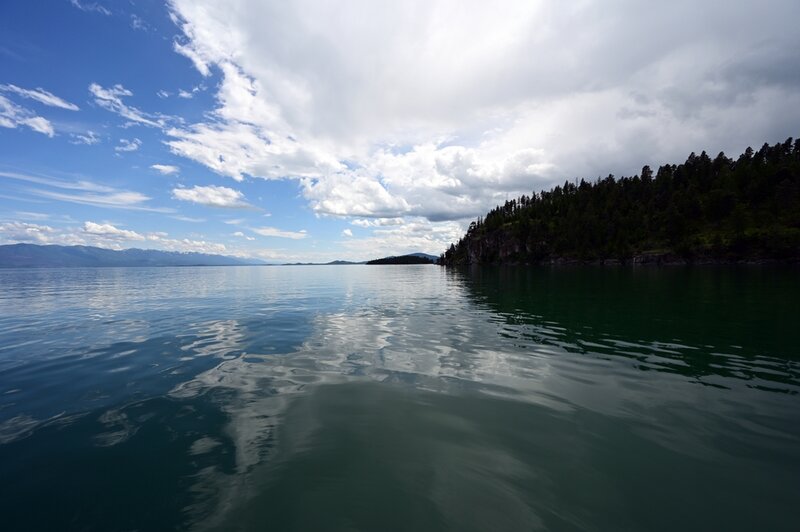 Past Flathead Lake, the Flathead River flows fast and is quite wide in Montana terms. Numerous braids and channels permeate this stretch of the river that runs between Columbia Falls and Kalispell.

As the river flows through the upper Flathead Valley it is mainly deep, and even in the warmer months, the water remains cold as it originates from snowmelt.

The river flows swiftly yet gently above the lake and doesn’t show any sign of slowing down until it gets close to the confluence with Flathead Lake.

The flows of the river become a lot more regulated once past Kerr Dam below Flathead Lake. Kerr Dam regulates the level of Flathead Lake, and the Flathead River’s flows vary as a result.

Activities and Attractions along the River

The designated stretch of the river for recreation includes the North Fork, Middle Fork, and South Fork above Hungry Horse Reservoir. This means outdoor recreation surrounded by amazing scenery, along with a few unique fishing opportunities and wildlife such as grizzly bears and wolves.

The regions along the river are largely rugged areas taking into consideration both the Glacier National Park and the Bob Marshall and Great Bear Wilderness areas along the way.

The lower Middle Fork and pretty much the entire North Fork are boundaries to Glacier National Park, and those sections of the river are managed with specific rules and regulations.

The Flathead River holds a decent population of medium-sized rainbow and cutthroat trout. One way to find them is to compartmentalize the river, looking for obvious holes and pools behind rocks, and fishing around the river’s many forks.

Many believe the best fly fishing on the lower Flathead River is on the Flathead Indian Reservation. Before heading out to fish this stretch though you will need to obtain a tribal fishing permit from a local fly fishing shop.

Aside from that reportedly a hopper works well around the Kalispel regions during late summer. Bull trout are also found in the river during the warmer months due to their migration up from Flathead Lake to their spawning grounds upstream.

Decent trout fishing is also to be found in the upper half of the river above Kerr Dam, while below the dam, the northern pike fishing is reportedly top-notch.

The Flathead River is far from the best fishery in Montana. There are various reasons for this, especially the fact that the water comes mainly from snowmelt and is thus low in nutrients.

That said, fishing pressure is very low compared to many other Montana Rivers, and the fish aren’t overly concerned about what comes their way.

The upper part of the Flathead River above Flathead Lake is popular with anyone seeking a spot of floating. The current is generally on the fast side and depending on river flows small rapids with large waves are common.

These small rapids can be easily bypassed though, and beyond them, there are likely to be a few small riffles and some whirlpools where the forks in the river converge, but nothing overly-challenging.

The Middle Fork of the Flathead River is a free-flowing river with no dam controls. This means the actual volume of water in the river comes according to the snowpack.

The river has a few stretches of more level water, as well as sections with some challenging rapids.  Water levels usually peak around the first week or two of June, and the South fork that runs from Youngs Creek to Hungry Horse reservoir is another popular designated stretch.

During the warmer months, it’s not uncommon to see a variety of vessels being used for floating down, with the most common being inflatable kayaks and rafts. Access for floating is really easy—Tea Kettle FAS in Columbia Falls is a prime example.

Tea Kettle FAS is one of the most enjoyable floats on the section of the River between Columbia Falls and the Old Steel Bridge FAS in Kalispell. Floaters can expect amazing scenery and a steady current. Float traffic is not too bad except maybe on weekends and holidays, and floaters should allow about 4 hours for this stretch including stops.

Some of the other designated access sites on the Flathead River are Blakenship Bridge, Kokanee Bend, Pressentine Bar, the Old Steel Bridge in Kalispell, Foy’s Bend, and Sportsman’s Bridge, which is one of the main access points to Flathead Lake.

Below Kerr Dam is where things get more exciting and the river flows through a canyon referred to as the “Buffalo Rapids.” It’s common for class IV rapids with sizeable waves and holes to show themselves around these stretches and caution should be employed.

The Flathead River is one of the most scenic waterways in the state and flows through some of the most desirable Montana bucket-list destinations. Its characteristic blue-green hue that comes from residual glacial silt allows it to blend effortlessly with the surroundings as it winds its way through popular and scenic Montana towns like Kalispel.

The Flathead River is in some ways unique among Montana’s rivers as it is really three rivers in one. With its various sections being popular for various attractions the Flathead River continues to attract both natives and wanderers from afar to the regions of its banks.