This stretch of the Continental Divide that runs through Montana adding its distinctive touch to the landscape is part of a greater hemispheric divide running all the way from northern Alaska, through the Andes in a southern direction, and then to the tip of South America.

Long before any modern settlers came to the Montana region, the prominent routes now known as MacDonald, Mullen, and Priest Pass in the Continental Divide served as important routes for Native Peoples and their prairie hunting grounds in the east.

That changed after the Lewis & Clark Expedition passed through the area and reported their findings in the early 19th century, and after being ‘discovered’ the area went through a period when various mining operations, some of them quite major, were the main focus of events.

Today this region of Montana is more related mainly to recreation like hiking and mountain biking, not to mention winter sports at the Great Divide Ski Area than it is to any search for minerals or other resources.

The History of the Continental Divide in Montana

As Captain Lewis crossed the Continental Divide in 1806, he largely followed a trail along the Blackfoot River used by the Indians, which they had called “the river of the road to the buffalo.”

The explorer found his way back to the prairie along what is now called the Lewis and Clark Pass. This historic place is now protected and access is only granted on foot or horseback.

The Continental Divide was also once caught up in politics, and it played a key role in Montana’s early history. The Idaho Territory, established in 1863, originally included all of what is now Montana.

There had long been an increasing movement towards creating a new territory (Montana), and the idea was to use the Continental Divide as a boundary, meaning that half of Glacier Park, Flathead Lake, Missoula, and the Bitterroot Valley would today be part of Idaho.

Fortunately, it was eventually decided to have the boundary follow the Bitterroot Divide instead, and in July 1864 the first Territorial Governor–who had had a hand in the development of this move–was headquartered in the new territorial capital of Bannack.

Mining and the Continental Divide in Montana

Between MacDonald Pass and Butte, a hydrological line runs through a gamut of various mining claims, mine remnants, clear-cuts, and pretty much road-less backcountry.

The former mining town of Rimini, complete with shafts and claims, is located just below the eastern side of the Divide not too far from Helena.

Midway through its journey southward just past Nevada Mountain, the Continental Divide traverses what was a heavily-mined district.

This historic town known as Marysville was in fact one of the state’s main gold producers, especially in terms of the famous Drumlummon Mine.

The mine was established by Thomas Cruse and ended up producing close to $50 million of gold. Cruse’s legacy is the wonderful Helena Cathedral that he was responsible for.

The Prominent Passes of the Continental Divide in Montana 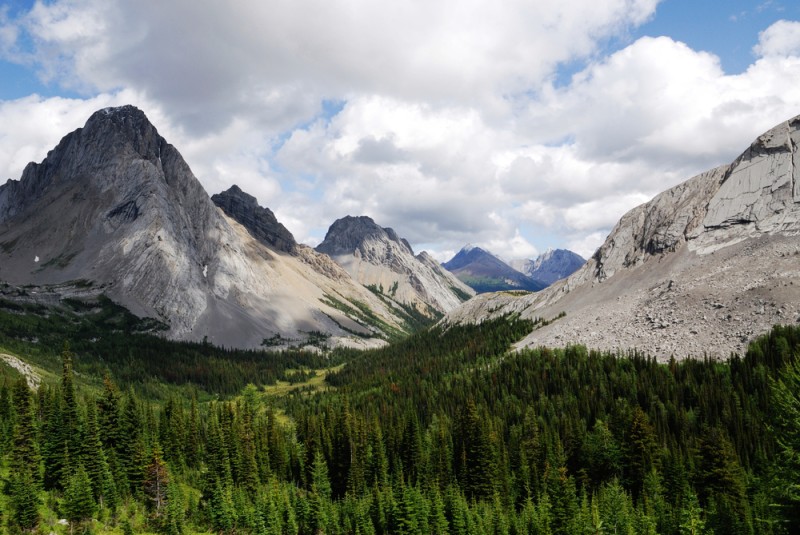 As the Divide nears southwestern Helena, three passes become apparent. Mullan Pass was prominent in Helena’s formative days and was named for Lt. John Mullan, who oversaw the military road construction between Fort Benton and Walla Walla, Washington in the 1860s.

The pass is known as being the point where a daring stunt pilot named Cromwell Dixon landed in 1911, succeeding in the very first flight across the Continental Divide.

Priest Pass was once a well-traversed wagon road until a toll road was constructed nearby. Logging was big in the area and the continuous tracking over the muddy spots of the toll road made travel much easier for horse-drawn stagecoaches, in which case this approach soon became the main route to and from Helena.

Today, a four-lane Highway also runs across the top of MacDonald Pass, and a well-used public cross-country ski trail system on the east side is maintained near Frontier Town.

Marias Pass stands 5,213 feet above sea level at the point where it crosses the Divide, in Glacier National Park. You can access this point from U.S. Highway 2, where you can easily pull off to take in the views of the Lewis Mountain Range, or maybe catch a few glimpses of the trains that cross the divide here.

Logan Pass is also to be found in Glacier National Park, and sitting at 6,646 feet above sea level, this is considered one of the most challenging access points leading across the divide.

It’s the highest point reachable by car in the national park, and it is only accessible when there is a distinct lack of snow as the roads are virtually impossible to plow.

Camping along the Continental Divide

Plenty of camping options in what is basically Glacier Country, so the campgrounds within the national park are one of the main choices.

Any of the small towns in the vicinity should offer at least some camping facilities, and this small selection is just to give some idea of what is available in the region of the Continental Divide.

In Browning, for instance, you will find the Fifty Mountain Campground. This facility is situated along the Continental Divide Trail which makes it a popular choice for recreation enthusiasts.

The Many Glacier Campground within the park and also in Browning is a good choice with 13 sites if you are looking for some decent amenities by way of showers and toilets. This spot also offers excellent access to Going-to-the-Sun-Road.

The Benchmark Campground a bit further along in Augusta is another option with 25 sites and various amenities.

This is another popular campground in the area that gets busy in summer and provides access to plenty of outdoor recreation.

The Cromwell-Dixon Campground at Helena is also right next to the Continental Divide Trail and is another popular developed camping facility.

Once you start looking at area maps around the vicinity of the Continental Divide and especially the well-worn trail, you’ll see you are pretty much spoilt for choice in camping terms.

Other Recreation and Tourism along the Continental Divide 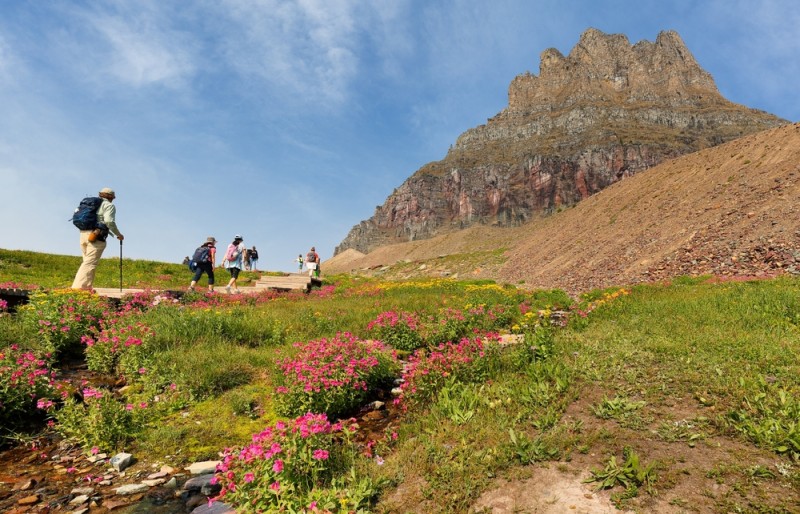 The Continental Divide in Montana accounts for 13 miles of the untamed tracts of the Blackfoot Meadows Wilderness Study Area.

This region is a favorite of hikers and horseback riders and consists of single creek and wash terrain. Wild and rugged landscapes containing stark cliffs that seem cut into rolling prairie meadows are offset by the pockets of pine and fir that give way to an area of picturesque beauty.

Mountain Biking in the Continental Divide 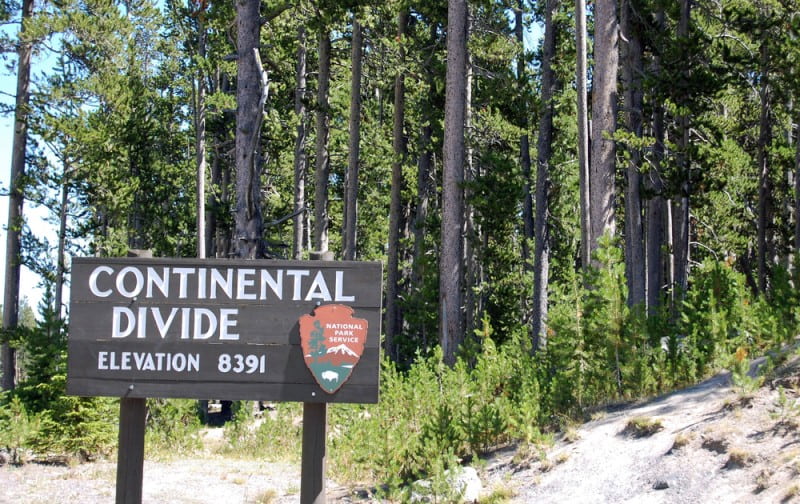 McDonald Pass to Priest Pass is typical of some of the routes on offer around these regions that are fantastic for off-roading.  This particular loop starts out following the Continental Divide Trail up to Priest Pass.

This is a fairly technical stretch with a good few rocky sections. The rest of the ride is on a somewhat smoother dirt road that leads to Highway 12 and allows you to make an enjoyable descent back down to MacDonald Pass.

The 7.7-mile Blackfoot Meadows Trail is located in the Seven Blackfoot Wilderness Study Area (WSA) which is about 30 miles northwest of Montana’s Jordan, in Garfield County.

Public access is available through a narrow 1/4-mile section on the Chalk Butte County Road, and the Blackfoot Meadows Trail is closest to Helena and Elliston.

The trail is set in a roadless wilderness area and starts out at the end of Forest Service Road #227, just past the Kading Campground.

The trail continues past the Forest boundary, which then leads into the vicinity of the Beaverhead-Deerlodge National Forest.

The Autumn Creek Trailhead near Marias Pass is for anyone who likes longer stretches. The route starts out from the west bank of Autumn Creek on US Highway 2 at the southeastern corner of the park.

This is a 17-mile trail that first heads in the direction of Elk Mountain before descending 2.5 miles down to the junction trail that runs past Three Bears Lake and up to the highway summit of Marias Pass.

There are a few miles of poorly maintained trail after that until at least the junction with the Lubec Trail. For the last 2 miles or so trail eases off between the park boundary and Midvale Creek Bridge behind Glacier Park Lodge, winding up at Midvale Creek Trailhead.

The Continental Divide Trail is a route that follows the footsteps of Lewis & Clark along scenic, surrounding timber-covered mountain scenery.

As the trail extends for 800 miles or so it is unlikely that you’ll cover it with a day hike. Almost 200 of those miles are across the border in Idaho as well, so you can start to narrow down where to begin and how much to cover!

The trail covers prominent areas like Glacier National Park, Waterton Lake, and mountain ranges like those of the Anaconda, Bitterroot, and Beaverhead Mountains.

There is also Hell Roaring Canyon, Chief Joseph Pass, and the Bob Marshall Wilderness to factor into that, so whichever stretch of the trail you fancy taking on depends on where you are or where you are heading.

Compared to some of the bigger, world-class resorts in and around Montana, the Great Divide is a lot more down-to-earth, and this is reflected in the prices.

The snow at the resort is always well-maintained and the ski area features a 1,330 vertical drop. Some of the first snow that hits the state will fall here too, although it is a bit lighter than in other areas.

Fishing near the Continental Divide 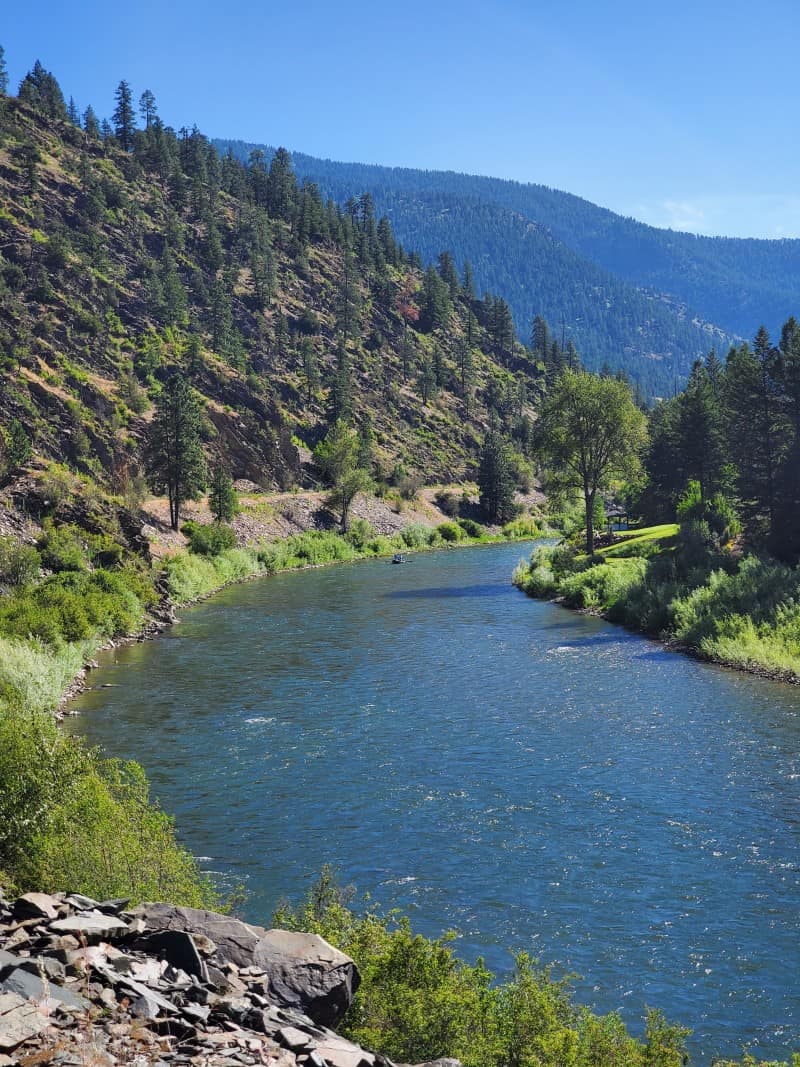 The Blackfoot River runs just west of the CD and was the inspiring waterway for the classic novella-turned-movie “A River Runs through It”.

Apparently, it continues to inspire anglers to this day with its reportedly excellent fly fishing for wild trout amidst rugged canyon walls, with the strong likelihood of thick hatches all season long.

The Blackfoot River is just a short drive across Roger’s Pass from the Missouri River and is best accessed from the small town of Craig.

The river winds its way through a high river valley from the Bob Marshall Wilderness, eventually winding up at the confluence with the Clark Fork River.

The river is renowned for top trout fishing, not to mention the surrounding scenery with Ponderosa Pines and deep canyons.

Montana’s vast and rugged landscape is the ideal place for the Continental Divide to stretch itself.

It lends itself quite nicely to the terrain, the history, and the recreation of the Big Sky Country quite nicely, and contains the majority of Montana’s finest and most historic stretches of the natural landscape.

Overall, the huge rock formation that is the Continental Divide serves as a hub and a gateway to the network of small towns and recreational opportunities that Montana is so well-loved for.