Thanks to its landscape of prairies and wilderness against a stunning mountainous backdrop, Montana attracts millions of outdoor enthusiasts every year. But Big Sky Country is more than just a travel gem. If you’re wondering whether Montana is a good place to live in, the answer is yes!

The local cities are charming, peaceful, and flourishing with opportunity. Plus, Montana gives residents direct access to wonders like Yellowstone National Park and Glacier National Park.

Every city in Montana offers something unique to its residents. If you’re considering making the move, here are our seven best Montana towns to live in.

Billings is one of the largest cities in Montana. According to a new study conducted by WalletHub, Billings is also one of the best-run cities in the country. It ranked at number 17 in the study out of 150 cities, which took into account six categories including financial stability, education, health, safety, economy, infrastructure, and pollution.

The study found that the unemployment rate in Billings, at 3.1%, is lower than the state-wide average of 3.8%. Billings also ranked at number #61 on Livability.com’s list of the world’s Top 100 Places to Live due to a number of factors, including advanced healthcare services, an abundance of jobs, and a reasonable cost of living.

As Billings is the most populous city in Montana, it also boasts several big-city amenities from world-class restaurants to thriving music venues to outdoor activities. Together, these factors mean that it’s one of the best Montana towns for those wanting that big city experience. 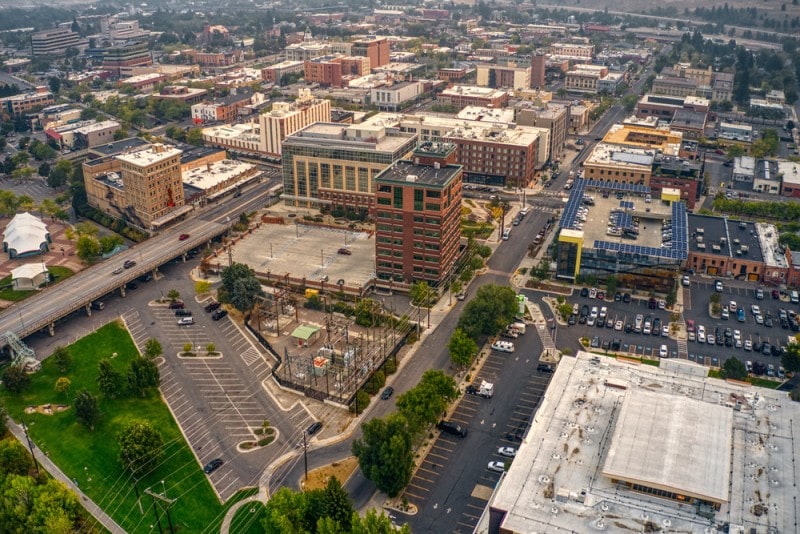 The same WalletHub study of the best-run cities in the United States also found that Missoula, located in the state’s west near the Clark Fork River, is also one of the best Montana cities to live in. When looking at metrics such as average life expectancy, median household income, infant mortality rate, and the city’s credit rating, Missoula was found to be one of the state’s hidden gems.

With a population of around 77,000, Missoula maintains its small-town feel, which is one of the main factors that it draws in families and those looking for a quieter lifestyle. At the same time, the economy in Missoula is stable and growing, and the town was actually named as one of the best small places for business and careers by Forbes.

Along with scenic landscapes and natural beauty, Missoula is also home to the University of Montana campus, which is one of the country’s top institutions for undergraduate education, according to the Princeton Review.

If college is in the equation for you or your family, then Bozeman is one of the best small towns that Montana has to offer. In 2016, Schools.com, an online source of national education news, ranked Bozeman as the fourth best small college town to live in.

Home to Montana State University, the list took into consideration the percentage of the population with a bachelor’s degree, the county employment rate, and the number of restaurants and bars per 10,000 residents, among other factors.

The town also boasts a booming economy, attracting entrepreneurs and high-tech companies basing themselves and creating jobs from Bozeman. Plus, all local tech and manufacturing businesses receive free mentoring from the Bozeman Technology Incubator.

As picturesque as the rest of the state, Bozeman is situated just 90 minutes from Yellowstone National Park, making it a mecca for outdoor lovers as well as students from all over the country. Additionally, the town is home to multiple impressive amenities, ranging from four museums to several art galleries.

The state capital of Montana, Helena established itself as one of the country’s wealthiest cities following the Montana Gold Rush in the 19th century, which led to the city being founded. These days, you can feel the affluence in the grand architecture still standing, not to mention in the median household income of $61,324, which is still above the state average.

In fact, data shows that the median income increased by more than nine percent between 2018 and 2019.

There are endless things to do in Helena, particularly for a history buff. Between the Montana Historical Society Museum, the Original Governor’s Mansion, and the stunning Cathedral of Saint Helena, the city offers a sea of activities and establishments contributing to the rich local culture.

Given its position between two majestic national parks and access to recreational activities like hiking, fly-fishing, skiing, and golfing, Helena is also thought of as one of the best adventure towns in the United States.

There’s at least one good reason why Glendive is one of the best cities in Montana, especially if you’re raising a family: it is officially the safest city in the state. Safewise published the findings in 2021 after the city reported just five occurrences of violent crime.

Interestingly, Glendive was named Montana’s safest city for the second year in a row thanks to its violent crime rate of a very low one percent.

In Citystistics’ livability rankings, Glendive received top scores for its cost of living, education, and low poverty rate, in addition to its low crime rate when compared to the national average.

Located in Dawson County, Glendive does embody a small-town vibe that also brings peace and tranquility. The pristine views of the surrounding environment add to its relaxing atmosphere. The southern border of Glendive straddles the fascinating Makoshika State Park, which boasts dinosaur bones and other fossils, mineral specimens, and marvelous rock formations.

Another small mountain town with only 7,500 residents, Livingston is situated only 45 miles from Yellowstone National Park. As the Bozeman Real Estate Group confirms, this is easily one of the most beautiful towns in America, even attracting celebrities such as Dennis Quaid, John Mayer, and James Cameron.

Though not a big city, Livingston boasts sufficient amenities including restaurants, breweries, and music venues, not to mention the museums and parks. It may lack the urban feel of somewhere like New York City, but it compensates with fresh air, outdoor activities, a unique local culture, and brilliant vistas.

For those who love annual events, Livingston hosts several festivals, including the craft beer festival Tap Into Montana, and the Livingston Roundup Rodeo.

What really makes this the best part of Montana to live in is its relatively low cost of living, which is cheaper than both the state average and the national average. Transportation costs are also 75% less than average in the United States.

Nestled in northwest Montana, Kalispell is a premium city to live in thanks to its proximity to Glacier National Park. Residents will never lack in outdoor recreation thanks to the abundance of skiing hotspots and sporting clubs in the area. The wide-open spaces bursting with wildlife are a great drawing point for anyone who craves a connection with nature.

Aside from the natural wonders, the cost of housing and living in Kalispell is relatively low when compared with the national average. There are also lots of employment opportunities here, including in the thriving tourism industry. Mining, healthcare, government services, ranching, and lumber are also prosperous industries offering employment to locals.

Kalispell is the most populated city in Flathead County so it has many conveniences in close proximity, including department stores, theaters, and the airport. Furthermore, the public high schools are at or above the state average, making it a great place in Montana to live in if you are raising a family.