Montana’s geography creates a jaw-dropping scenery unmatched anywhere in the US. The western part of the state is covered by mountains and rolling hills, while the prairie lands lie to the east. These two portions are separated by the Continental Divide which splits the state into two distinct climatic regions.

The prairie lands experience unique winter conditions than those observed in the mountainous west.  But exactly how cold does it get in Montana and why?

How Cold Does It Get in Montana?

Winter in Montana can feel cold and long. From early November into March, you can expect the temperature to range anywhere between minus 10 to minus 50 or colder. The state has been known to be battered with extreme temperatures and large snowfalls. Montana winters are certainly diverse, but almost always cold. 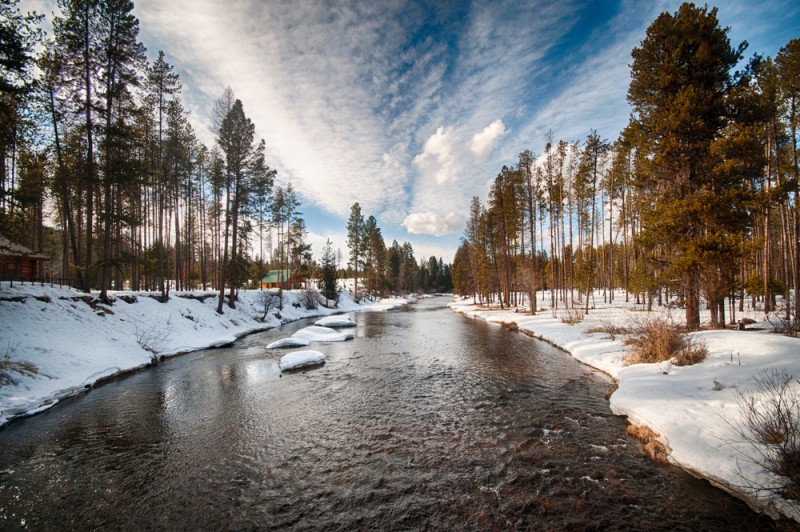 Montana experiences some of the chilliest winter months in the United States. Winter starts on October 26th through to April 27th. It peaks in December which records an average low of 2°F (-16.7°C) in Glasgow, which lies in the East and 22°F (-5.6°C) in Flathead Lake in Western MT.

Does It Snow in Montana?

Montana experiences loads of snow during winter, with the state’s tallest mountains recording more than 100 inches of 3-month snowpack. However,  snow can be experienced at any time of the year in some parts of the state.

Eastern cities of Glendive, Havre City, Great Falls, and Miles City experience heavy snow of up to 3 inches of 30-day snowpack. However, the figures are lower in the western regions. This is because the Eastern part has more wind, which hinders snow formation or blows it away if it forms.

When Does It Snow in Montana?

If you are a snow enthusiast seeking to experience Montana’s snowy climate, snowfall typically starts in October in most regions. Fortunately, this coincides with the elk spotting season and the last of fall’s vibrant colors.

Snowing gets intense as winter peaks and slows down towards April. However, the mountain regions frequently experience summer snow instead of rains due to frigid weather.

What’s the Lowest Temperature Ever Recorded in Montana?

Fairfield Montana still holds the record for the highest 12-hour temperature change in the United States’ history when the temperature dropped from 63 degrees to -21 degrees on December, 24th 1924.

That’s not all. Billings, Montana, set record lows below 70 degrees for five consecutive days between January 30th and February 4th in the 1989 winter season.

Montana’s temperature is sometimes affected by snowstorms. The worst ever snowstorm in MT was recorded in 1969 when the Southeastern parts experienced high-speed winds with a snowdrift of up to 20 feet tall.

The gale knocked down power lines and left more than 100,000 heads of cattle dead.

What Activities Can One Do in Montana During Winter?

Montana is one of the country’s top winter destinations due to its plethora of winter sports and activities. There are dozens of skiing and snowboarding sites alongside professional and amateur winter competitions.

Alternatively, you could try out family-friendly activities like Icelandic dog sledding, ice fishing, and ice climbing. Finally, if you are not into sports, you could visit dozens of natural hot springs for a holistic meditation experience.

November through March are the perfect months to explore Montana’s winter. Despite closed roads through most state parks, some parks have visitor centers that remain open during winter, where you can enjoy simple winter sports and guided tours.

What Weather Hazards are Experienced in Montana During Winter?

Mild snowstorms are scattered throughout the state during winter. No destructive storms have been recorded in the recent past.

Random snow avalanches often occur in the mountains; hence climbers are advised to be on high alert during winter’s peak.

While the answer to “how cold does it get in Montana” obviously varies depending on the year and season, it is no surprise that the winters can be particularly harsh at times.

However, the state also offers some of the best winter activities around the season and brings many tourists into the region for challenging hikes, beautiful landscape views, or recreation.

If you are looking to experience winter in Big Sky Country for the first time, make sure to come prepared with proper clothing and research what activities and areas you would like to visit.

We also recommend you take some time to check out the Northern Lights as they shine the brightest and longest during the winter months!