The Montana Northern Lights are electrically charged particles that collide with each other upon entering the earth’s atmosphere. The result, a splash of glittering light across the sky in a spectacular wave of color. It is a beautiful, natural phenomena that many make a point to see at least once in their life. Those looking to experience the Montana Northern Lights, they will be pleased to know they shine bright in Big Sky Country.

Where Can you see the Northern Lights in Montana?

The first step is choosing a prime location. Ideally, you have a better chance of witnessing the phenomenon in an area that offers clear skies where light pollution can’t disrupt the view.

Many of the remote stretches of wilderness in the northwest of the state have been known to host the hypnotic green lights, delighting those lucky enough to witness them.

Montana Northern Lights – The 6 Best Places to See Them 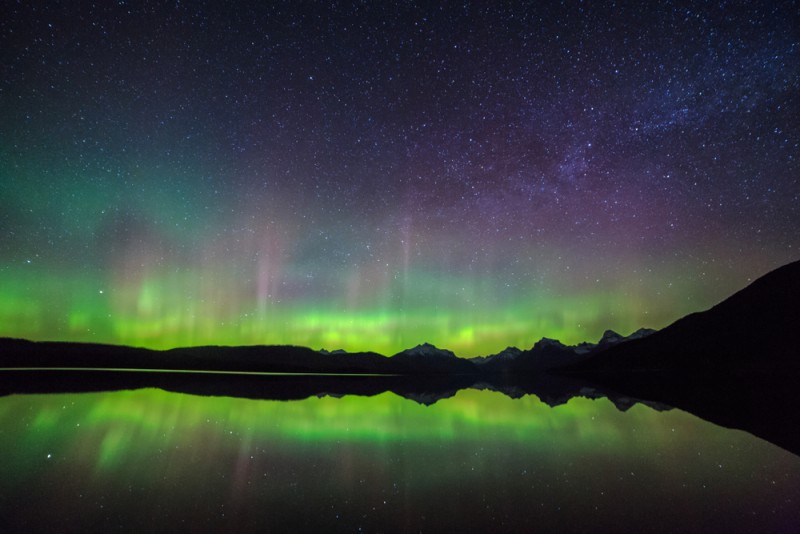 Without a doubt, Glacier National Park is one of the best places to see the Northern Lights in Montana. Widely referred to as “the Crown of the Continent”, the park is a national gem for a multitude of reasons, not least because of the unparalleled views it boasts of the unfiltered night sky. After the sun sets in the park, the horizon becomes inky black—the ideal setting in which to catch a glimpse of the lightshow of a lifetime.

Glacier National Park is situated in the state’s northwest, straddling the Canadian border. There are several key locations within the park that provide optimum views of the Northern Lights, perhaps the most famous being Lake McDonald.

The lake—which is the biggest in the park—is famous in its own right for its crystal-clear waters and the rainbow of colored pebbles visitors can see beneath the surface.

The other lakes that you might want to consider viewing from are Bowman Lake and Kintla Lake, both found in the remote northwest of the park. Along with Lake McDonald, these make such fantastic spots to watch the Northern Lights from thanks to the spectacular reflection of the lights bouncing off the water.

The lookouts scattered along Looking Glass Road also provide premium views. Named one of the most scenic drives within the park, the road begins at Kiowa off of US-98 and winds to East Glacier National Park. Along with the dancing skylights, this is also a prime location to spot some wildlife thanks to its quiet and remote atmosphere.

Of course, the Northern Lights Saloon & Café is a must for those in the mood for less-isolated viewing. You can find the establishment in Polebridge, located 22 miles from the Canadian border in Flathead County.

The historic city of Missoula is perhaps the most famous for its trout-fishing opportunities and the overwhelming natural beauty contained in the 60,000 acres of wilderness that surround it. But few people know that Missoula is also a great place for viewing the Northern Lights. In early October 2021, locals were treated to a dazzling display of lights thanks to the clear and cold fall conditions.

Typically, you have the best chance of seeing the Northern Lights in Missoula on nights that are cloudless. Given that the city is surrounded by so much wilderness providing unobstructed views without light pollution, it’s the ideal place to witness a Montana Aurora Borealis.

The chance to see the Northern Lights is a pretty convincing reason to visit Missoula, but the city has plenty of other sights and landmarks on offer too. The Washington Post confirms that Missoula is a hub for outdoor activity, from hiking and mountain biking to white-water rafting. The city is also famous for its breweries, historical museums, and thriving food scenes. If you’re visiting in summer, you can also find an abundance of water parks. 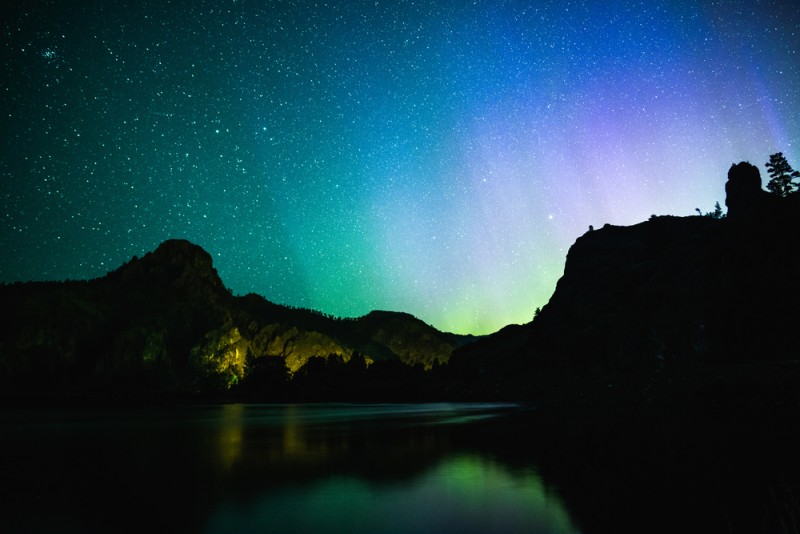 Located in the heart of Montana, near a collection of waterfalls that border the Missouri River, Cascade County is an unexpected but wonderful place to see the Northern Lights in Montana. For this visit, you may want to base yourself in the city of Great Falls and then drive out to escape the artificial lights that can obstruct the natural phenomenon.

The towns of Cascade, Vaughn, and Belt are around 15-20 miles from Great Falls and offer unprecedented viewing opportunities. In general, your greatest chance of seeing the Northern Lights here is between September and March,

You’ll also find part of the Lewis & Clark National Forest in Cascade County, as well as part of the Rocky Mountains, making it a scenic destination even without the light shows. Nearby, you can see the formidable beauty of Rainbow Falls, Black Eagle Falls, Crooked Falls and the Great Falls of the Missouri. Plus, there’s also Giant Springs, one of the biggest freshwater springs in the country, and the stunning Giant Springs State Park.

If you are basing yourself in Great Falls, there are amazing recreational activities available, whether you’re a history buff or an adventure-seeker. For those interested in learning about the interesting background of Great Falls, there’s the Lewis and Clark Interpretive Center, the Great Falls Historic District, and C.M. Russell Museum.

Sources confirm that north-western Montana is one of the best places for stargazing. So naturally, the many campgrounds and wilderness areas with clear views of the night sky are also premium spots for watching the Northern Lights.

The Seeley-Swan Valley is a chain of pristine natural lakes in the state’s northwest that offers clear sky vistas perfect for viewing. The area actually comprises two valleys: the Swan Valley and the Seeley Valley, both famous for their scenic vistas.

As with all areas in Montana, your best bet of seeing the lights is on long nights from late fall through early spring. An hour before to an hour after midnight is thought to be the best time slot to catch the lights, and of course, the fewer clouds in the sky, the better!

Cushioned between the Swan Mountains to the east and the Mission Mountains to the west, the valleys attract hordes of visitors each year looking to enjoy the local natural wonders and outdoor activities on offer. Around the lakes, visitors typically enjoy camping, water activities, hiking and horseback riding. 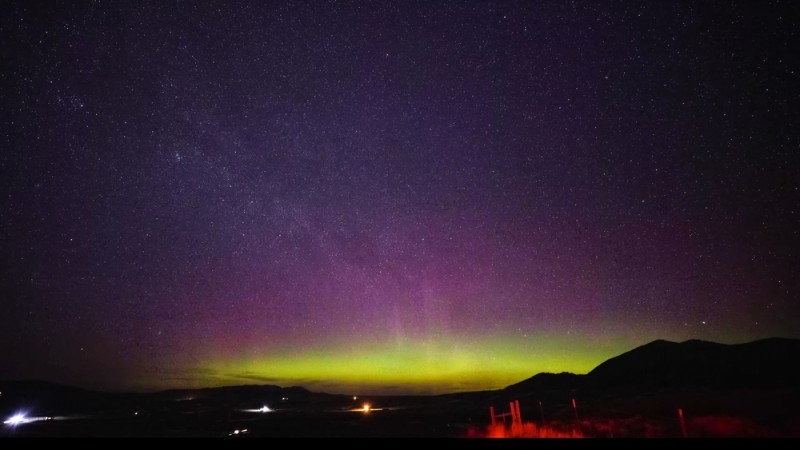 The mountain town lies in between Glacier National Park and the postcard-perfect Flathead Lake, so there are plenty of opportunities to get away from the bustle of the city center and take in the undisturbed views among nature.

Sometimes called “the Soul of Montana”, Kalispell has established itself as a mecca for outdoor enthusiasts and a gateway to the wilderness. Here, you can enjoy access to some of the state’s most renowned landmarks as well as a unique local culture that feels like a cross between “an Old West town” and a hub of innovative restaurants and boutique stores. 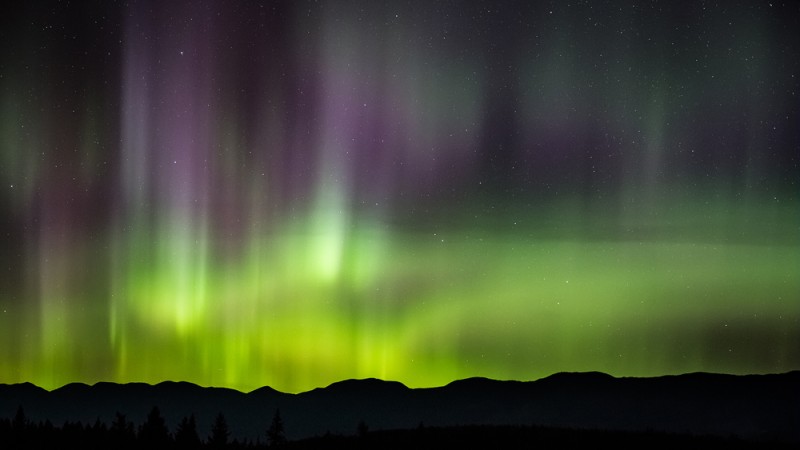 Just two miles to the northwest of Whitefish is Whitefish Lake State Park, another expanse of awe-inspiring wilderness in Montana. The area is home to Whitefish Lake, one of the most popular in the state, and is known to be a prime location for observing the Northern Lights thanks to the clear skies.

Like the other lakes mentioned in this list, Whitefish Lake has the added bonus of reflecting the spectacular lights off the water, transforming a spellbinding show into an absolutely unforgettable one.

Whitefish Lake Skate Park is similarly located in Flathead County, one of the best areas in the state to view the Aurora Borealis when the conditions are right. The county also hosts the striking city of Kalispell and acts as the gateway to the western entrance of Glacier National Park.

Once an ice-age glacier, Whitefish Lake today is a beloved destination for outdoor enthusiasts and boasts the chance for boating, skiing, swimming, and other water sports. The park itself offers a small beach and several camping sites from which you can have flawless views of the Montana Northern Lights.

Best Times to See the Northern Lights in Montana

While there is no definitive answer for the best time to observe the Montana Northern Lights, the Aurora Zone which specializes in stargazing the natural phenomena has some advice for those looking to check out aurora borealis for themselves.

Once darkness falls, the Northern Lights may become visible and have been recorded as early as 4pm and as late as 6pm, depending on the season. Regardless, stargazers seem to have the most success between 9.30pm to 1am, which makes it the best time to head out to try to catch a glimpse for yourself.

As far as months, if you are able to catch them through September and October you will be treated to the beautiful sight of the lights reflecting off of one of the many picturesque lakes in Montana.

If you can handle the cold, January to March is considered the most ideal timeframe to get a glimpse of the Montana Northern Lights – the longer the night the more likely you are to capture a stunning view.