Montana’s Glasgow was initially established at the end of the 19th-century as a railroad town. It is the county seat of Valley County, and the town maintains a population of less than 4,000.

Glasgow may not always be considered your typical Montana town in that it is located far away from the state’s iconic mountain ranges.

What you do get is picturesque and rolling plains with open farmland, and the town is located very close to Fort Peck Lake. The region in and around Glasgow contains plenty of roads with access to this huge body of water and recreation area, many winding through the Charles M. Russell National Wildlife Refuge.

Glasgow was one of those unfortunate Montana counties hit rather hard by the consolidation of the agricultural industry, and this led to some population decline in the area.

Once the boom that came with the Fort Peck Dam construction was over, the town then had to adjust to further decline in the late 1930s.

To top that, Glasgow also lost a major WW2 air force base that had as many as 10,000 residents at one point.

Yet the town has apparently had some success in attracting some new businesses, although this is not so obvious from the downtown area of Glasgow, which again is not your typical popular Montana style.

In fact, it’s possible you may not even see the downtown area as US Highway 2 is located on the north side of the railroad tracks running through town.

The area still has all the usual amenities like food, hotels, and some retail outlets, while the actual town is across the south side of the railroad tracks, not on the highway.

To get into the town follow the signs pointing towards downtown which takes you under the railroad tracks. 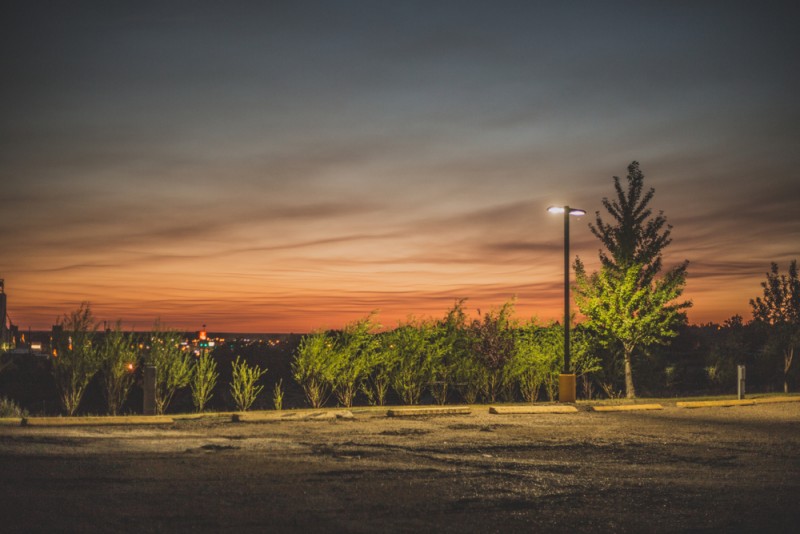 The museum is a non-profit facility with the purpose of preserving the local culture and heritage.

It was first opened in 1970 and contains a vast and eclectic collection of exhibits including everything from vintage farm equipment to taxidermy items, fossils, Indian, railroad, business, and aviation artifacts and collections

The Pioneer Museum has various support from Valley County, as well as the Historical Society, and Friends of the Museum.

The museum hosts various themed exhibitions such as the ‘From Dinosaur Bones to Moonwalk’ which relates to Valley County and its inhabitants through authentic artifacts woven into historic displays.

The displays include such topics and themes as dioramas, murals, and pictures of pioneers, along with features like the Stan Kalinski room containing a collection of more than 200 mounted animals and birds.

The museum is located on Highway 2, West at 8th Avenue. 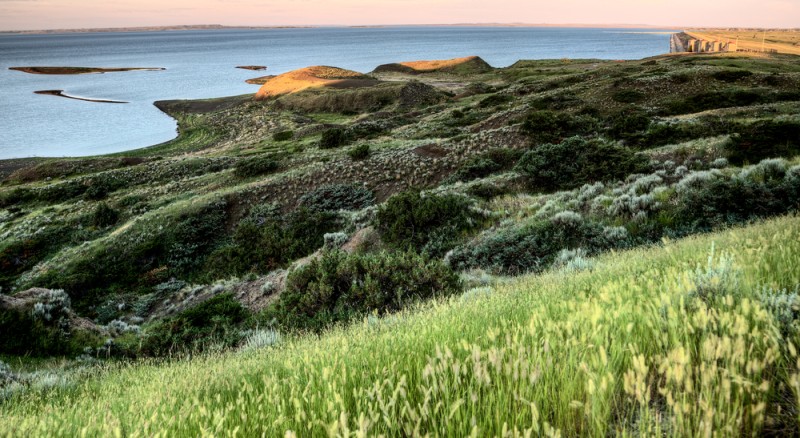 Fort Peck Lake was formed as a result of the construction of the impressive Fort Peck Dam in 1940, which turned out to be the largest lake in Montana.

The dam itself is the largest earth-filled one in the world, and Fort Peck Lake is 134 miles long with over 1500 miles of shoreline. The entirety of the lake is also within the boundaries of the huge Charles M. Russell Wildlife Refuge.

The construction of the dam began in 1933, when something of a public building boom was occurring, even during the Great Depression years.

Throughout the dam’s construction phase, the town of Fort Peck developed around it and was a proper boomtown due to the thousands of workers involved.

Alongside the massive dam complex, these workers also formed a recreation area around the dam, which contains a few decent campgrounds, day-use areas, and interpretative sites.

This is located inside the northern end of the Charles M. Russell Wildlife Refuge, and the exhibits include a full-sized replica of a T-Rex, and plenty of information about the area’s history and geology, and a few insights relating to the construction of the Fort Peck Dam.

The theater was built at the same time as the other construction of Fort Peck took place by the US Army Corps of Engineers in the 1930s.

The theater in its heyday ran packed houses with movies showing around the clock for the entertainment of the workers. The building is now a Historic Landmark owned and operated by the Fort Peck Fine Arts Council.

In the summer you can catch various live performances on weekends. 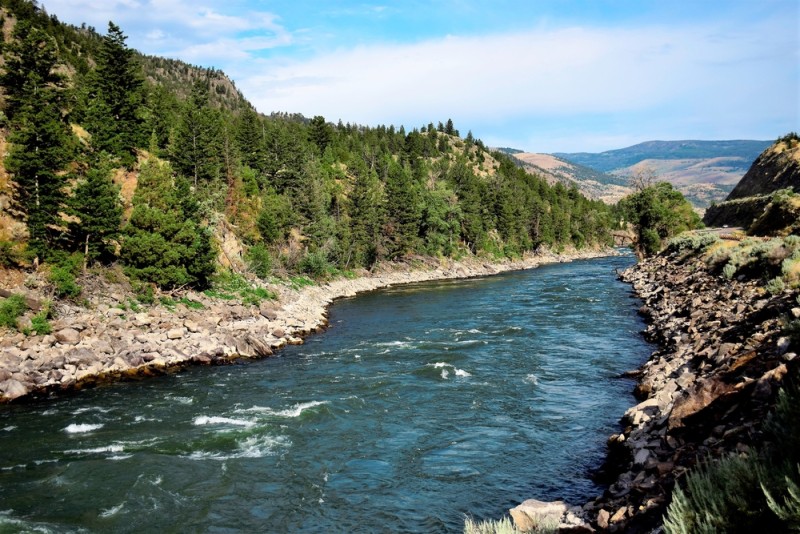 Although you will find various trails in the vicinity of the Fort Peck Lake area, this is also part of the million acres or more of the Charles Russell Wildlife Refuge region where you can find trails like the moderate, 9-mile up-and-back route to the top of the butte where you are rewarded with some excellent views of the lake.

Probably one of the most well-worn trails within the refuge where there is little by way of maintained or landscaped trail routes.

Fort Peck Campground is just off Highway 24, 20 miles south of Glasgow, and it happens to cross over the top of the dam, with the lake being on the south side of the dam. The Campground is below the dam heading more to the north, as is the Interpretive Center.

The best way to reach the campground is to turn north off of Highway 24 at the dam’s east end then turn around and head back for a mile or so toward Fort Peck. The entrance to the campground is just a few hundred feet past the Interpretive Center.

The Downstream Campground is a 78-site campground at Fort Peck popular with those fishing as well as with families. It has all the comforts like restrooms, water, showers, a dump station, and hook-ups, suitable for tent and RV camping.

Sites are close enough to the water for anyone staying to enjoy fishing, boating, or canoeing, and there’s even a fish cleaning station as well as grassy sites and playgrounds.

West End Tent and Trailer Campground is another camping option in Glasgow. This is a 13-site area with electrical hook-ups, nestled nicely on a hill on the north shore of Fort Peck Lake.

It is a bit smaller and quieter here than at some of the other camps popular with fishermen as there are fewer boat ramps in the vicinity.

Fort Peck Lake can contain some exceptional fishing for walleye, to the point where during peak walleye periods the town can be positively buzzing.

The 134-mile long lake is known throughout Montana for its walleye fishing, although it is reported to contain up to 50 other species of fish.

The lake is also host to the annual Governor’s Cup, which brings in anglers from all over seeking out large walleye. To fish Fort Peck Lake properly a boat is necessary, and preferably once with a powerful motor at that. This is not only due to the size of the lake but also because the lake can be incredibly windy at times, creating some sizable waves.

Glasgow is actually located in a decent area for hunting, especially deer hunting. Hunting is very popular around the Fort Peck Lake region, and the Charles M. Russell Wildlife Refuge is a prime hunting region for deer, elk, and upland birds.

It runs along the banks of the Missouri River and encompasses the Fort Peck Reservoir. The southern end is about 1.5 hours from Glasgow, but it is the major entry point for the site.

The refuge is host to thousands of visitors every year who come for the wildlife like beavers, white-tail deer, and the largest community of Rocky Mountain bighorn sheep in the world outside of the Rockies. 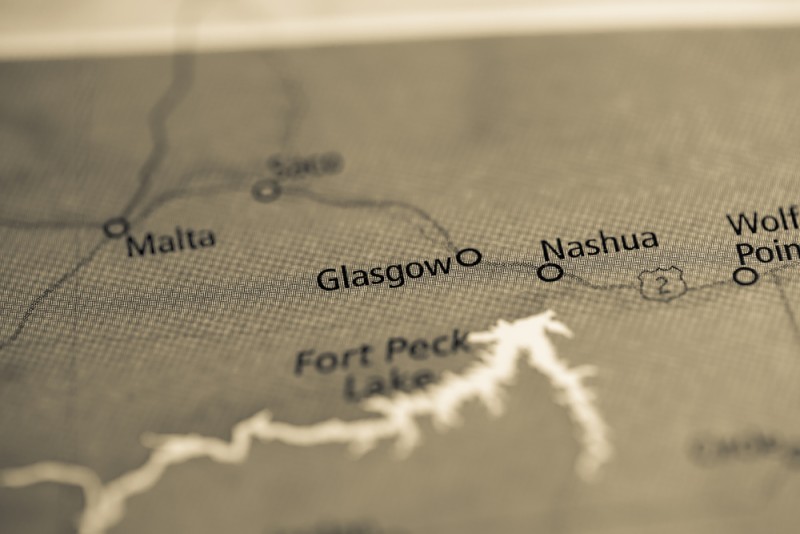 Activities and other Points of Interest near Glasgow

With a collection of glacially carved lakes, man-made reservoirs, and mighty rivers cutting through the wide-open…

As a tributary of the larger Missouri River, the Milk River begins near Browning, Montana, home…

Montana is home to some of the best fishing in the world. It is home to…

Each year, over 11 million tourists come to Montana to enjoy skiing, hiking, biking, camping, and…

In the County Seat of Valley County, Glasgow may be a small town, but it boasts…