The Beartooth Mountains are located in south-central Montana as well as some parts of Wyoming. The mountains got their name from a rugged peak found within the range that resembles a bear’s tooth, and they border both the fossil-rich Bighorn Basin and the Absaroka Range.

The Beartooth Mountains also form part of the Absaroka-Beartooth Wilderness, and the landscape in and around them features some huge peaks amidst high and vast plateaus. This is a terrain of glacier-carved cirques and high alpine lakes, and the Beartooths are also home to Montana’s highest point by way of Granite Peak.

The Beartooths feature in the north-eastern corner of Yellowstone National Park, and span the route from Yellowstone to Red lodge.  In fact, one of the best ways to experience the mountains is to drive the Beartooth Highway, which runs between the northeast entrance of the national park and Red Lodge. The range sits primarily within the Shoshone National Forest, and the highway provides the easiest and most scenic access.

This whole region has some of the most prominent (and highest) features of the entire Montana terrain and earned the moniker ‘the roof of Montana’ from the native peoples due to its high summits soaring above cloud-piercing plateaus.

More than three-quarters of the entire region is above the treeline, and nine major drainages pour out of the higher reaches, with one-third of that flowing into the Yellowstone River. The two combined ranges of the Absaroka and Beartooth mountains are sometimes known as the Absaroka-Beartooths and together boast more than 120 peaks over 10,000 feet in elevation.

As part of a designated Wilderness Area, the Beartooth Mountains are accessible year-round, although the weather can be harsh and the levels of snow may limit access to some areas during various months.

The best time to visit the area is May to October, and if you are not familiar with the territory it might be an idea to arrange the services of an outfitter or guide for any of the numerous recreational activities on offer throughout the region. 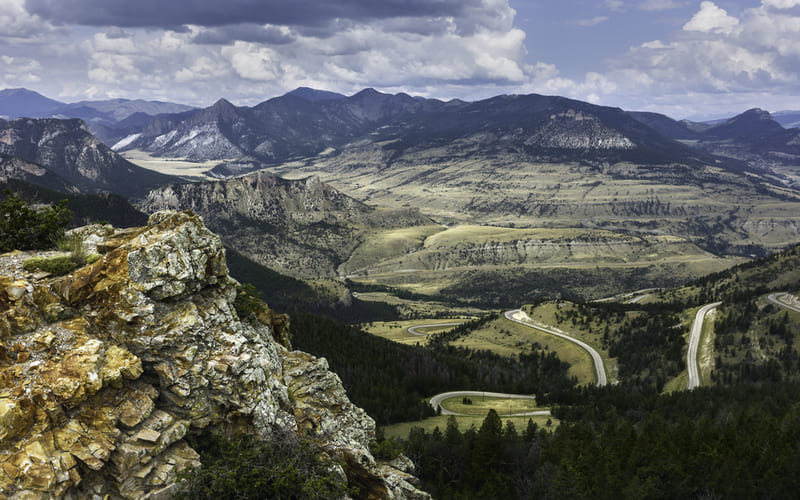 Things to Do in the Beartooth Mountain Regions 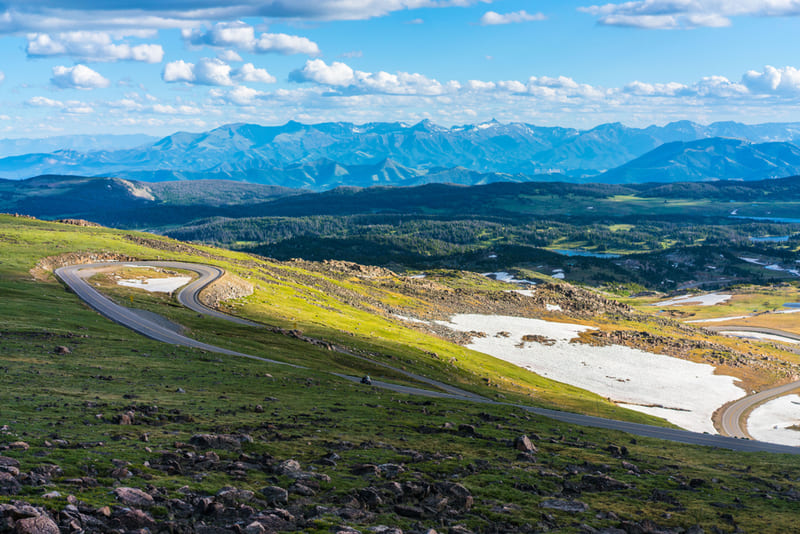 Drive the Beartooth Highway. This is a good way to get close to the mountains and also experience them in all their glory. The route includes the negotiation of a few twists and curves that require your full attention when driving, and you’ll see sparkling lakes and alpine tundra along this 68-mile route.

The entire route connects Cooke City to Red Lodge and takes about 2 hours in all to drive, and the highway is typically open from Memorial Day weekend through the end of September, barring snowfall. This trek is dramatic and breathtaking with some impressive scenery and views of The Beartooth Mountains.

Aside from that, the majority of the attractions of the region relate to outdoor recreation which is year-round and includes hiking, fishing, camping, skiing, and snowmobiling, to name just a few options in the Beartooth Mountains.

Recreation in the Beartooth Mountains

Camping is allowed pretty much anywhere within the Absaroka-Beartooth Wilderness, although you are supposed to check in with the Beartooth Ranger Station in Red Lodge before camping in the back-country, and you also need a permit before cutting up any firewood.

Camping in or around the wilderness area is excellent, with many designated campgrounds along with endless informal campsites. Bear in mind that this is Grizzly Bear country though, and take the necessary precautions. There are also many campgrounds along the Beartooth Highway region with varying levels of amenities. Here are a couple of examples:

Beartooth Lake Campground is set in an area popular for fishing, boating, and hiking as well as camping. The lake is adjacent to Highway 212, just over 20 miles to the east of Cooke City. This is a forest service campground with 21 sites offered on a first-come, first-served basis.

Usually full during the summer this site has a boat launch and a few decent trailheads. The sites are $15.00 per night to use and the campground operates between July and September. This spot is a great base to use as a gateway into the surrounding high country wilderness and is just over 25 miles from Yellowstone National Park.

Limber Pine Campground is less than a mile from the scenic highway and has 13 sites. It operates between May and early September and does accept reservations for some sites. Toilets, water, picnic tables, and fire rings all feature here — Red Lodge is only 13 miles from this spot.

Greenough Lake and another campground of the same name are within walking distance as is the Parkside National Recreation Trail along with many other hiking options.

Parkside Campground has 28 sites, some of which can be reserved, and it is also just off the Beartooth Highway, 12 miles from Red Lodge. This site operates between May and September and has toilets, tables, and pits.

Parkside is one of 3 sites – the other 2 being Greenough Lake and Limber Pine – that are quite close together and just off Highway 212. Parkside is on Rock Creek and is the nearest to the road. It has tables, fire rings, and toilets, and is another busy campground that fills quickly during the warmer months.

The mountain lake fishing not just in the mountains but within the region of the Absaroka-Beartooth Wilderness is some of the finest there is in the entire state. We are talking crystal clear lakes packed with cutthroat trout, brook trout, rainbow trout, and occasionally the much sought-after golden trout.

There are literally hundreds of fishable lakes in the wilderness and mountain areas, although some lakes are actually devoid of fish due to harsh winters. With that in mind, if you are not familiar with the area it is vitally important when venturing into the Absaroka-Beartooth Wilderness Area to find someone first who knows whether or not the lakes hold any fish. 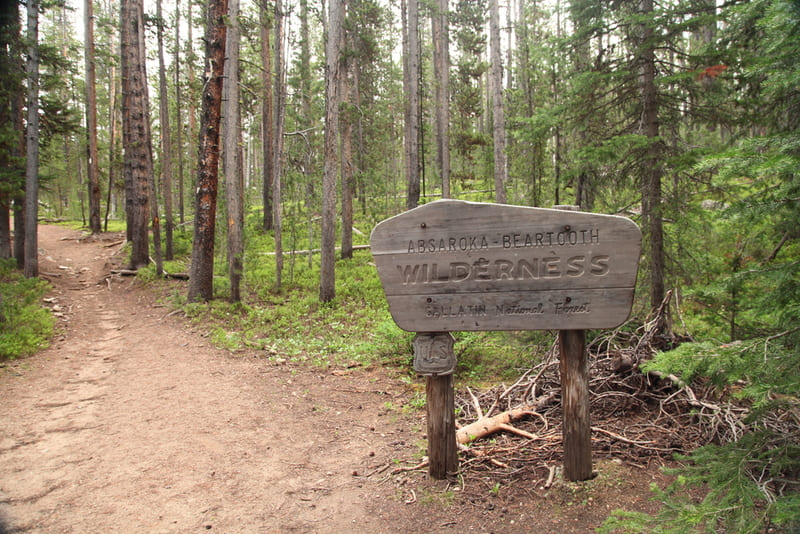 If you are up for some hiking first you may consider a 6-mile day hike that goes up into the backcountry to Sylvan Lake which also has a campground if you found the hike a bit much to repeat in one day. This is a well-known, alpine pond set at 10,000 feet that contains plenty of trout.

If you are staying on a campground near to the scenic highway then Rock Creek is pretty much one of the first opportunities for fishing that you are likely to encounter. The landscape and terrain in the vicinity of Beartooth Pass also have a fair few lakes worth checking out dotted around and don’t forget to check out both Beartooth Lake and Little Bear Creek.

Hiking Trails in the Beartooth Mountains

Access to the Absaroka-Beartooth Wilderness region is really easy via a number of roads flanking the area and a few running parallel with the border. Some roads actually go into the wilderness area, and these roads allow hikers a few options when it comes to access points and trails to hike.

You can also access a plethora of trailheads whilst navigating the Beartooth Highway. Here are a few examples of the trails on offer in and around the region of the Beartooth Mountains.

The Bannock Trail is a small, 4.8-mile section of a route once used by Native Americans to hunt buffalo. This trail is suitable for pretty much anyone, and it starts out in the small community of Silver Gate. The terrain is fairly flat along the route, with slight elevation gains of 130 feet.

The trail runs parallel with Soda Butte Creek, which runs into Yellowstone National Park, and the route features a couple of streams that run through open meadows and forest groves, and need to be crossed. The best time to use this out-and-back trail is between May and mid-October.

Starting out near the town of Red Lodge, this moderate to strenuous 8-mile trail then follows a narrow mountain drainage that curves around Sheridan Point.

The trail leads to the headwaters of Corral Creek on the Line Creek Plateau and includes five creek crossings in the first mile. The hike is fairly difficult, although highly scenic, and there are elevation gains of more than 3,000 feet.

This is a 12-mile round trip and a great day hike in the Beartooths. This trail features some of the most impressive scenic beauty you are likely to encounter, and the Becker and Albino Lakes are situated in a region of picturesque lakes and lovely meadows.

You’ll get some impressive views of the Beartooth Plateau’s high peaks and rugged landscapes along this route.

This trail is just less than 12 miles in round trip terms, and it is another scenic route that ascends through the Silver Run Lakes basin before winding up and along the Silver Run Plateau. You’ll be able to take in vast, tundra-clad expanses of rolling terrain at elevations over the 10,000-ft mark, and the first 3 miles or so of the hike follow the Timberline Trail.

The lake loop is a slightly less than 8-mile round trip that covers a total of six lakes in all. This is a very scenic and visually impressive trail that takes you through wildflower meadows and features some equally fine views of Beartooth Butte and Lonesome Mountain, as well as many of the other high ridges towering along the east side of the mountain.