The Bozeman Trail has played a key role in the early history of both Montana and Wyoming.  Some of the events that occurred while this 500-mile-long trail was in its heyday were prominent defining factors of the American west.

It all started when the entrepreneurial spirit of one John Bozeman took him a different route after finding little success through his own mining efforts.

Along with well-versed mountain man John Jacobs, Bozeman started seeking out a shortcut running from the Oregon Trail to Virginia City, with the idea of becoming the paid guide of potential prospectors.

They found the trail, which rather, unfortunately, headed out along what turned out to be the hunting grounds of Native People by way of some prime buffalo grazing country. This was territory long since claimed by the Lakota Sioux, the Northern Cheyenne and the Arapaho Indian tribes for hunting.

The leader of this coalition was the famous Lakota Chief Red Cloud. Once the two men along with their new business venture took it on themselves to widen the trail in parts for direct wagon access from the Oregon Trail, trouble began to brew.

The trail moved north through the Powder River Basin, curved west toward the Tongue River, then northwest to the Yellowstone Valley, and finally through the state’s southern regions before arriving at the gold fields of Alder Gulch-Virginia City where it was all happening.

When they ran their first wagon train on the newly marked trail in 1863, the party was soon confronted by large numbers of both Cheyenne and Sioux warriors, and issued with the bleak warning to either turn back or be killed.

The beginnings of ‘Red Cloud’s War’ thus occurred, which led to the U.S. Government constructing and militarizing forts along the way.

Fort Phil Kearny, Fort Reno and Fort Smith for a time stood as symbols of safety for traveling prospectors as tales of success soon filtered back along the trail–although the forts eventually turned out to be the locations of many battles.

The end of the trail came after war had ensued that didn’t end well for the Americans, resulting in the Bozeman Trail closing down. This came after the Powder River region was ceded to the victorious Native Americans—who would in turn find ultimate defeat and loss of lands later on in 1877.

John Bozeman moved on to settle close to what is today the Bozeman Pass region–and managed to establish the beginnings of the town that bears his name before perishing somewhat suspiciously just 3 years after that during a Yellowstone River outing.

Efforts are currently afoot to designate the trail as a National Historic Trail and discussions involving landowners, Native Tribes, and the government continues.

The History of the Bozeman Trail 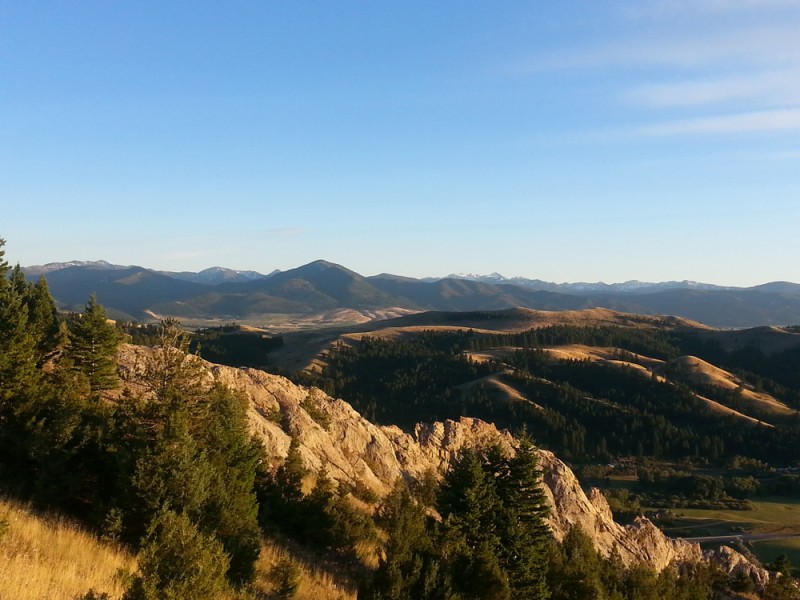 Once word had spread like wildfire in May 1863 about the new deposit being found at Alder Gulch, the in-surge of miners began.

In no time at all the hillsides along Alder Gulch were covered with the hastily-erected tents, brush shelters, and crude log cabins of the miners. Soon the booming new town was named Virginia City.

By this time John Bozeman had decided on a change of direction in terms of careers. He decided it might instead be more lucrative to provide services to the miners rather than being one himself.

The streams of prospectors heading into the area were fuel for his ideas and he joined forces with local mountain man John Jacobs, effectively entering into the new business as a guide.

Bozeman promoted and Jacobs guided across the land he knew well, including the rivers, water holes and mountains. They searched and found a time-saving shortcut to the Montana goldfields from the Oregon Trail, and the Bozeman Trail was born.

The route they chose turned out to be a well-used corridor that Indian tribes had followed for centuries.

By the 1860s it had also become known to explorers of European descent, and an expedition had even been led by the U.S. Army Corps’ Topographical Engineers in an attempt to identify possible wagon routes through northern Wyoming and southern Montana.

This was a 500-mile-long corridor that allowed travelers to skip mountain and desert terrain, trimming down any potential travel time through the area significantly.

Eventually, they hit the Yellowstone Valley and progressed on through southern Montana to the goldfields at Virginia City. The only drawback—and it was apparently a significant one–was the danger from Indian attack.

Bozeman’s bravery in pressing on to Virginia City through the shorter route earned him a great deal of respect from the emigrants and was the main reason the trail was named for him.

According to some Montana historians, the actual emigration period of the Bozeman Trail lasted only from 1863 to 1866, when the trail had become mainly a military transportation road.

Apparently, more than 2000 made it along the trail without incident, although they may have been largely unaware that the Indians would make their journey hazardous.

Museums and Interpretive Centers along the Bozeman Trail

Historic Sites in the Area

Today the Bozeman Trail corridor is actually still a major travel route between the northern and southern regions, although an interstate highway has long since replaced the wagon and horseback trails.

Those traveling the trail are still able to see the same surrounding countryside as back in those days. There are also markers and historical interpretive signs at many sites along the trail route.

Camping along the Bozeman Trail

The Bozeman Trail Campground and RV Park is a place to stop off that’s close to all the adventure you are likely to need.

It can be an ideal jumping-off point for Yellowstone National Park but don’t forget the city of Bozeman has plenty of options for outdoor activity as well as dining, shopping, and cultural events and places.

The facility is easy to access from the freeway and has more than 50 hookups available. Pets are welcome at this facility and is open from April 1 through October 30.

Other Recreation and Tourism along the Bozeman Trail

If you are intent on checking out the real Bozeman Trail you’ll need to do so from a road vehicle these days.

But if you fancy the idea of a cruise along a remote and scenic route that closely follows over 40 miles of the original Bozeman trail, you can do so by taking exit 254 from Interstate 25 at Kaycee in Wyoming.

Follow Highway 192 east for about 20 miles then take a left in a northern direction to follow the Sussex Road—which does incidentally turn to dust and dirt after a few miles.

If you continue on the Sussex Road for 5 miles you’ll come to three historic and interpretive plaques on the right side of the road.

You should then head north for about 1.5 miles before turning left, in a western direction toward the Bighorn Mountains.

This takes you along Nine Mile Road–also known as the Bozeman Trail Road—and you might look out for other historical markers along this stretch of the route before bearing right when you come to a fork.

After another 25 miles the road comes to a T junction where you should take a right onto Trabing Road, following it for almost 15 miles to I-25.

The distance in all from the Nine Mile Road turnoff from the Sussex Road back to I-25 is 39.9 miles. Most of the roads along this route are well-graded, graveled county roads, although obviously best traveled in the warmer months.

Although the original Bozeman Trail is largely a vehicle route these days, you are certainly looking in the right place—Bozeman—if you are interested in hiking trails of all descriptions.

Check out some of the best hikes in Bozeman HERE.

The Bozeman Trail plays a key part in the history of Montana and Wyoming and plays a large role in how the states developed into what they are today. As a history buff, any trip to Montana should have some time put aside to explore or learn more about the Bozeman Trail