The word Montana is synonymous with outdoor adventure. It’s not hard to see this once you get to glimpse the landscapes in some areas of the Big Sky state. This is especially true of those spots containing glaciated mountains surrounded by dense forests with wild, rushing rivers streaming through them.

Aside from that, there are several other rivers flowing through Montana’s southern and southwestern regions that also qualify as noteworthy white-water rafting stretches.

If you fancy some thrills and some extra-fast, extra-white foam on your next trip to the Treasure State, keep reading to find out about some of the best white water rafting in Montana. 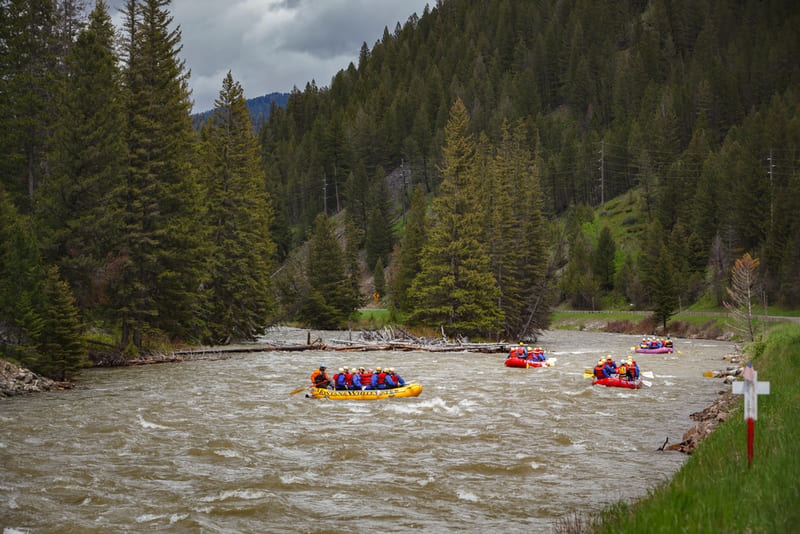 The rafting season in Big Sky State typically begins around April and continues through September.

Some of the prime times to seek out white water rafting in Montana are reportedly around the time of late spring and early summer so why not start with one of the longest free-flowing rivers in the entire United States.

The Yellowstone River has a dam-free current running close to 700 miles in its entirety from Yellowstone National Park to North Dakota.

For many, this river epitomizes the landscape and scenery of Montana, from the relatively calm rafting down the river’s gentle rapids near Billings to the more challenging stretches in the region of Paradise Alley.

Yankee Jim Canyon is one of the most renowned runs of challenging white water in the river a Class III stretch of prime Montana white water featuring individually-named rapids like ‘Yankee Jim’s Revenge’.

Some stretches of the Yellowstone River have particular energy to them throughout the summer months that attracts white water adventure enthusiasts from all over.

A good place to start is just outside the national park’s east entrance in Gardiner, where the river runs through Paradise Valley and is surrounded by the highly-picturesque Absaroka Mountains.

The Gallatin River stretches for more than 100 miles through Montana’s southern regions of Yellowstone Country.

The Gallatin is another river with its source in Yellowstone National Park although this one winds up at the Missouri River in Three Forks.

Some stretches of this rather scenic river provide access to a few sections of the state’s iconic white water. Most outfitters who operate along the Gallatin will likely start out from Big Sky, where you can jump onto either a half or full-day white water rafting excursion.

Two main sections of the river capture the attention of most rafters. Certainly, the lower section is the most challenging and features the ‘Mad Mile’ and ‘House Rock’ Rapids. This latter, funky-sounding rapid is one of many Class III-IV rapids common to this iconic section, particularly throughout June and July.

The upper section is slightly less adrenaline-fueled than the lower and is probably more about the impressive mountain scenery.

Rafters can employ the expert services of local outfitters for both half and full-day trips, many of which tend to operate along the rocky Gallatin River Canyon where there are plenty of chances of seeing wildlife. 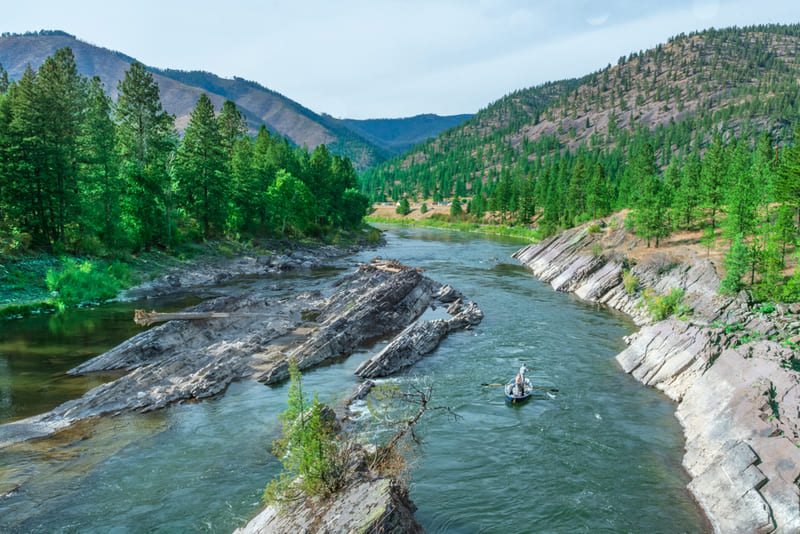 The Clark Fork River has just a small section of white water. To be more specific, most people associate white water and rafting on the Clark Fork with the Class III rapids in Alberton Gorge.

Alberton Gorge is a section along the river just over thirty miles from Missoula. This short but well-renowned and exciting stretch of waterway contains plenty of adrenaline-inducing rapids. It also comes interspersed with picturesque sections of calmer flatwater.

The main options for public launching into Alberton Gorge are from the town of Alberton itself, while many boaters also start out near the Cyr Bridge.

A popular 12-mile route along this section is from Cyr Bridge to the Tarkio Fishing Access Point. This stretch includes Class III-IV rapids year-round along a scenic river surrounded by geographical features like cliffs, river shelves, and huge boulders.

You will encounter the big waves of the Class III Triple Bridge Rapid under the final bridge of this stretch of the river. This is quickly followed by the Class IV Tumbleweed at a pinch in the river where there is some very quick water.

The somewhat terrible-sounding Class III Boat Eater is also in there somewhere, as is Fang, a renowned Class IV that means it’s time to be on the lookout for large flip-worthy waves coming from all angles.

As the Madison River passes by Ennis and its accompanying lake it enters somewhat more remote terrain by way of the scenic Bear Trap Canyon. This is the main canyon to head for in the state if rafting the longest available stretch of white water interests you.

Adrenaline-seekers will encounter the canyon’s Class III-IV rapids along a stretch that usually entails a full day to get through.

There aren’t too many outfitters running trips along these parts either due to their remoteness, with their tall canyon walls and big boulders surrounding the way.

It’s common for many rafters to put in at the Madison Dam which then entails 10 miles of paddling first. But the paddle and the subsequent Class II-III rapids at the beginning of the run are great preparation for the real crunch rapid the Class IV Kitchen Sink Rapid.

With that in mind, it’s fair to say that some sections of the Madison River are not for beginners and could even be hazardous in a few spots.

The Flathead River runs from the Rocky Mountains of Montana’s north-western regions and forms three waterways on its route to some scenic river corridors.

Two of these waterways, the Middle Fork and North Fork form the southern and western lines of Glacier National Park.

In simple terms, this means they provide some excellent white water conditions not to mention some of the best raft views of the national park’s landscapes as no rafting is allowed within the park.

To really narrow things down, the Middle Fork of the Flathead is the stretch of the river that draws the most attention from anyone seeking white-water experiences in Montana.

The beginning of the river flows right through the huge Bob Marshall Wilderness Complex, although this is accessible only via non-motorized transportation.

This section of the river features Class II-III rapids with a seasonal flow from early spring to late summer. You can expect abundant mountain goat sightings along the shore of this stretch of river where almost all rapids are fairly mild Class II affairs.

That said, at higher flows the water can provide a much more edgy experience and the Class III’s Bear Creek and Staircase Rapids feature rocks that are capable of flipping or pinning a raft.

Probably the most challenging (and popular) stretch of the river is the 7-mile stretch from Moccasin Creek to West Glacier. This is also known as the John Stevens Canyon, and rafters encounter several Class II-III rapids in succession along here. 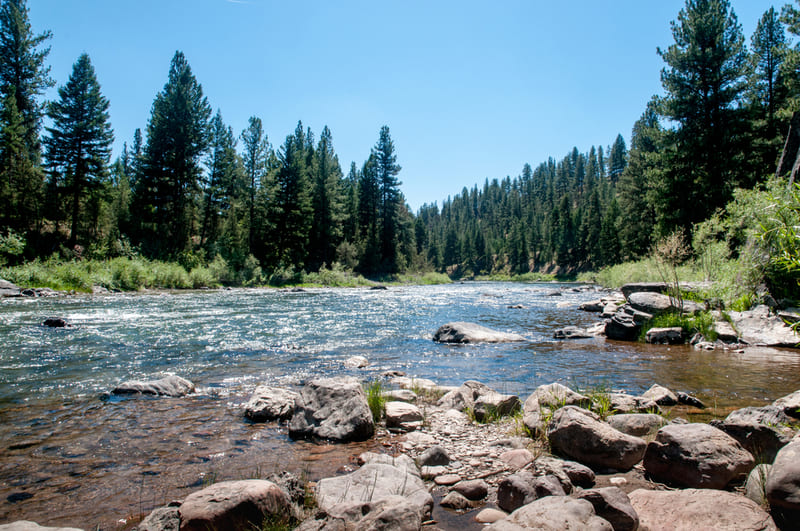 The Blackfoot River flows through a highly-scenic canyon with some white water at the tail end of it. After that it connects to the Clearwater River at Clearwater Junction.

Just under the junction, the river enters the mountains along the protected river corridor where the river picks up some pace around the various rapids and deep pools.

The Blackfoot River provides plenty of public put-in and take-out points along the sections that are floatable.

The upper and lower areas around Russell Gates are quite different in that the former is flat for the most part, while the elevation drops a lot quicker in the lower regions. The water here is more consistently Class II with a few stretches of Class III.

This section of the Blackfoot runs reasonably close to Highway 200 for the majority of the trip, and the Class III rapid at the Roundup Bridge is a key point along the route where the river crosses Highway 200.