Inspired by details he witnessed as a wrangler in Montana, his love of the open plains, and his passion for frontier life, he created works that truly captured the spirit of the West.

Who Was Charlie Russell?

Though Charles Marion Russell is so revered in Montana, he was actually born in St. Louis, Missouri on March 19, 1864. His family was prominent in St. Louis, with his father owning the Oak Hill Firebrick and Tile Works.

His father wished for him to take over the family business, but young Charlie Russell had other ideas. From a young age, he dreamed of the fast-paced cowboy life, imagining his days on the range.

He spent hours reading about the Wild West and paid special attention to the fur traders and explorers who would pass through Missouri. At the age of 16 in 1880, he ventured to the Judith Basin of Central Montana to try and make it as a cowpuncher.

Prior to arriving in Montana, he traveled to Hazel Dell Farm in Jerseyville, Illinois, where he learned to ride on a famous horse from the Civil War called Great Britain. Russell was taught by Col. William H. Fulkerson, who married into the Russell family.

He initially took a job on a sheep ranch, and as he was unsuccessful, he was eventually mentored by hunter and trader Jake Hoover, who taught Russell how to survive and thrive in the wilderness.

For the next two years, Russell lived in Hoover’s cabin on the South Fork of the Judith River and served as Hoover’s apprentice.

In 1882, Russell returned to Missouri and Illinois to visit family. His cousin James Fulkerson, nine months his junior, traveled with him back to Montana to work on a cattle ranch, but passed away from mountain fever at Billings only two weeks after arriving.

After his apprenticeship, Russell found work with multiple cattle outfits operating in the Judith Basin as a night herder.

It was here that the foundations for his lucrative career as an artist were born; while he worked at night, he spent his days simply observing, recording, and eventually sketching, life with the outfits.

For the next 11 years, Russell fulfilled his dream of working as a cowboy and a wrangler. It wasn’t until 1893, when he was 29, that he retired from cowboy life to become a full-time artist. 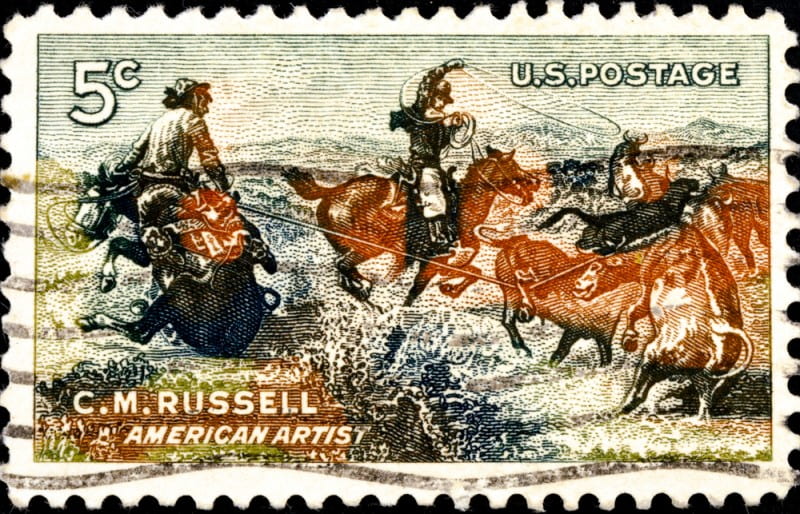 Despite dreaming of a career as a wrangler, Russell showed promise as an artist from a young age. While still living in Missouri, he often fashioned clay animal figurines and drew sketches.

In the winters of 1886 and 1887, the O-H Ranch in the Judith Basin, where Russell worked, received a letter from the ranch owner enquiring how the cattle had fared during the cold months.

In response, Russell painted a postcard-sized watercolor for the ranch foreman to send that depicted the sad state of the hungry cattle. On the postcard, Russell had painted wolves stalking malnourished steers under the gray sky.

The ranch owner was so impressed by the work that he showed it to friends and business acquaintances before displaying it in a shop window in Helena. With this publicity, commissioned work began to stream to Russell.

Russell captioned the famous postcard Waiting for a Chinook. Later, he created a more detailed variation of the picture, which became one of his most renowned works.

It’s estimated that Russell created around 4,000 works of art in his lifetime. The central theme of his work was inspired by his love of Montana and the cowboy way of life he led.

Critics have noted that his paintings were able to capture key personalities and events and tell their stories without words. He also made wax animals and figures out of clay and plaster, in addition to more formal sculptures that he later cast in bronze.

As a Western artist, Russell was one of the first of his kind to actually live the majority of his life in the West. He knew his subject matter extensively because he experienced it every day and spent many hours observing the intricate details. In this way, he set a high standard for the next generations of Western artists.

Russell also relied on his imagination to create his art. For example, some of his most popular works were based on buffalo hunts, which he never personally witnessed.

One of his most famous works is his Self-Portrait, which he painted in 1900. He depicts himself with his hat tipped back, wearing a red Metis sash and custom high-heeled riding boots which made clear his individuality.

Though there’s no denying Russell was exceptionally talented, he viewed his own art skill as luck, as evidenced in one of his letters: “I believe in luck and have lots of it … Any man that can make a living doing what he likes is lucky, and I’m that.”

His work was admired during his lifetime and continues to be held in high esteem today. His paintings and sculptures are displayed all over the world, including at the Metropolitan Museum of Art in New York City, where his 1899 painting Indian Braves is held.

Some of his most well-known work is displayed in this YouTube video.

What Was His Relationship Like With the Northern Plains Indians?

In 1888, while working as a cowboy and wrangler, Russell lived near the camps of the Blackfoot, Piegan, and Blood Indians in Alberta, Canada. He came to greatly admire them and was inspired to create many detailed artworks capturing the daily life of the Northern Plains Indians.

In particular, women of the Northern Plains Indians became the basis for many of his paintings.  He would often portray them riding proudly on horseback, treating them with the same dignity as he would the Indian warriors.

In his political views, Russell was ahead of his time, fighting against inequalities and standing up for those who were oppressed in the American West, including the First Nations people and women.

He supported the Chippewa Tribe in their campaign to have their own reservation in Montana. Eventually, legislation to create the Rocky Boy Reservation was passed, making this ambition a reality.

Russell also pushed for environmental conservation. Though the world was a long way behind, he chronicled these visions for a better future in his art.

Russell married Nancy Cooper in 1896 and they lived together in the small community of Cascade. A supportive wife, Nancy quickly became his business manager and turned her focus to promoting her husband’s career as an artist.

While Russell’s personality was more introverted, Nancy planned shows for him across America and abroad, and is largely credited with helping him to gain the recognition that he did.

Together, the Russells built a frame house in Great Falls in 1900. Three years later, they built a log studio which Russell filled with his large collection of Western props, including weapons, cowboy gear, utilitarian objects, and Indian clothing. It was in this studio that he completed most of his famous works.

The couple adopted a son, Jack, in 1916. Russell enjoyed 10 years as a father before passing away of a heart attack at home in Great Falls on October 24, 1926. 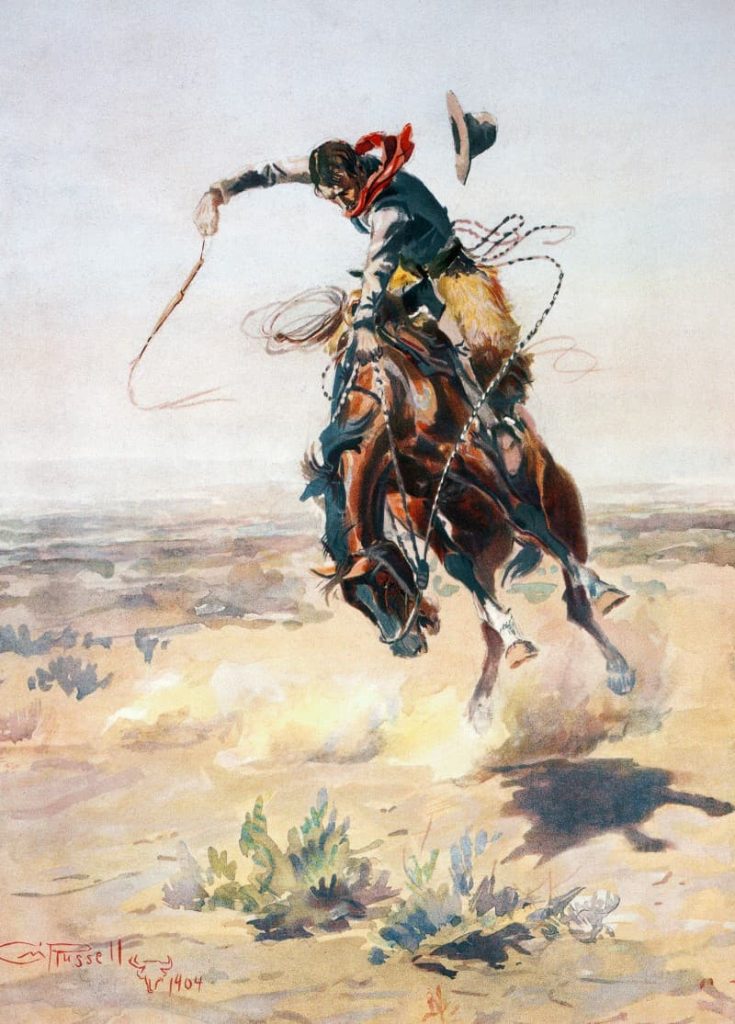 Russell was a globally recognized artist by the early 1900s, but he never desired to leave Montana, electing to spend his entire life in the state after arriving at the age of 16.

Remaining humble throughout his life, he championed the beauty and spirit of Montana, opening his soul to the state’s rolling plains. He celebrated and glorified the virtues of the West that had already begun to disappear during his lifetime, thus becoming a symbol of the West itself.

On the day of his funeral in 1926, every child in Great Falls was released from school to watch the procession. His coffin was transported in a glass-sided coach pulled by four black horses.

Today, several important areas and institutions have been created and named in his honor across Montana.

Of course, Russell’s influence extends beyond the borders of Montana; the Russell Center for the Study of Art of the American West at the University of Oklahoma was named after him.

Russell is an icon of Western artists today, with art historian B. Byron Price terming the Cowboy Artists of America as “The Sons of Charlie Russell”.

For his contributions to art, storytelling, and the celebration and depiction of the Old West in popular culture, Charles M. Russell remains one of Montana’s most legendary figures.

He’s had an incalculable influence on Western artists, both past and present, and is revered in Montana for shaping the modern image of the traditional cowboy.

Do you have a favorite Charles M. Russell painting? Let us know in the comments below!