Since 1871 the town of Deer Lodge has been home to the Montana State Prison and all of its interesting history.

The History of The Montana State Prison 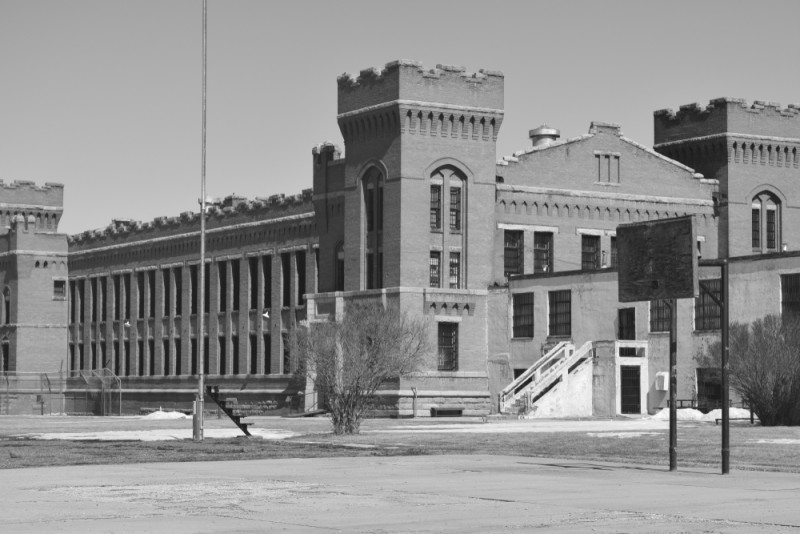 The Montana gold rush that started in 1862 brought many men to the territory looking for fortune and a better life.

Most of these men were hard working and found their livelihood working in mines, or in the towns that supported the mining industry. However, like many other states that experienced the boom from gold mining, along with the miners came criminals.

The need for a territorial prison became more urgent as the state’s population grew, and the process of shipping criminals to the Nebraska Territorial Prison became burdensome.

In 1867, the United States Congress approved funding for a territorial prison in Montana. In 1870, construction on the Montana Territorial Prison began, and its first prisoner was received in 1871.

The prison was undersized from the start, and when Montana became a state in 1889, and the operation of the prison passed from the federal government to the State, the state contracted out the operations (which had become very expensive) in 1890.

Much of the facility as it is today, was built by the prisoners. The idea of using convict labor to expand and improve the prison was started by Frank Conley, the prison’s first warden, who held this post from 1890 to 1921.

Despite the work to expand the prison facilities, the Montana State Prison was always overcrowded, and living conditions were subpar.

Today, today the actual prison is situated 5-miles outside of Deer Lodge. The “Old Montana Prison” however, remains in town and is operated by the Powell County Museum and Arts Foundation.

One of the most interesting parts of Montana State Prison’s history is the people that were prisoners there.

Turkey Pete was probably the most colorful of the inmates held in the Montana State Prison. In 1918 Paul Eitner was sentenced to life in prison for murder.

He was assigned to Cell No.1. Despite his violent past, Paul was a model prisoner who was loved by guards and other inmates.

Because he was so mild-mannered and well-behaved, he was given the job of tending to the prison turkeys. As Turkey Pete aged his mind became less than reliable and one day, he sold all of the prison turkeys to a passing stranger for 25-cents each.

After selling the prison turkeys, Turkey Pete’s mental decline became more obvious and the prison staff indulged his desire to have a new “job” in the prison. He declared himself the owner and administrator of the prison.

Prison staff and other inmates humored his desires, allowing Turkey Pete to “run” the prison from his cell. The prison even printed fake checks for Turkey Pete so he could pay employees and cover expenses for the prison.

Besides running the prison, Paul would tell anyone that would spare a moment of his coffee crop in Brazil, and his sale of ships to the Navy, grasshopper legs to Fidel Castro, and pink alligators.

Paul Eitner died in prison in 1967 at 89 years of age. His was the only funeral held on prison grounds, and after his passing, Cell No.1 was retired and left in the condition that it was in when Turkey Pete died.

These two men planned the riot that was the breaking point of the crowding and poor conditions in the prison. On April 15, 1959, these two men led a group of around 12 other inmates in an escape attempt.

When their escape was stopped, Myles and Smart held the 12 inmates and the prison warden hostage. The escape attempt started a riot in the prison that raged for three days.

The melee was only stopped when the National Guard was called in. Myles and Smart killed themselves prior to being taken into custody.

The prison was home to many other notorious names and men that lived their lives on the wrong side of the law.

Many of these men died within the walls of the prison, and today the Old Montana State Prison is considered to be one of the most haunted buildings in the State of Montana. 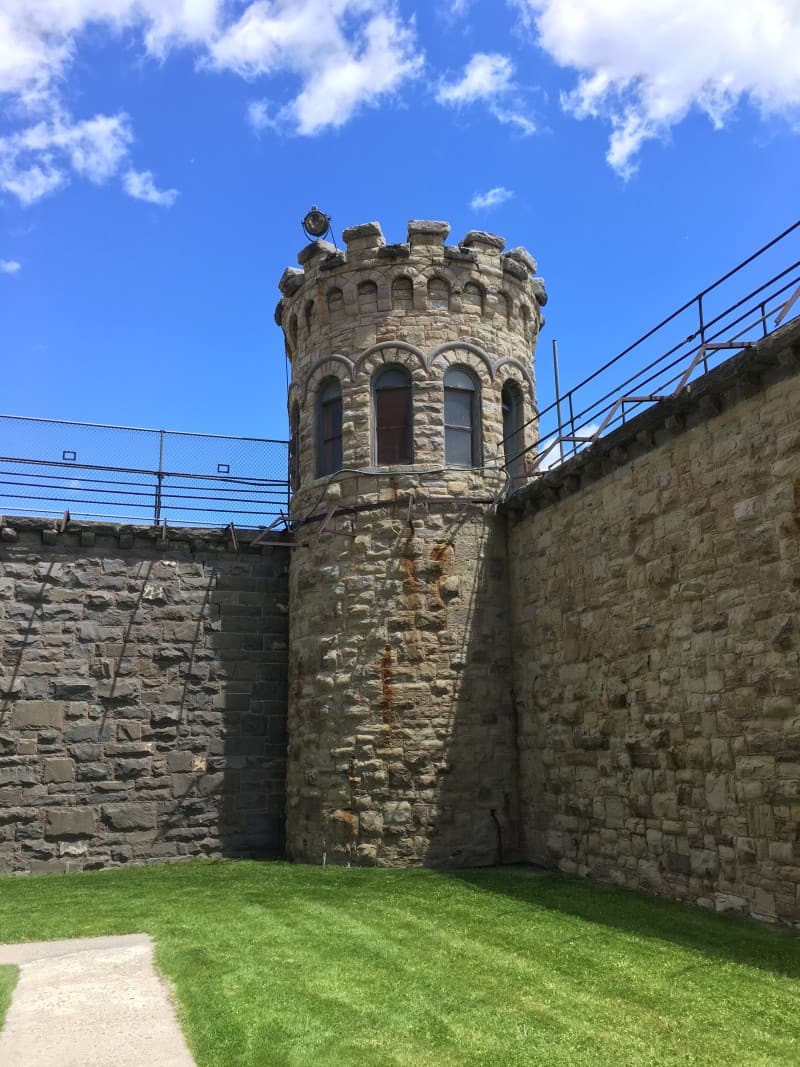 Today, prisoners reside in the Montana State Prison located outside of Deer Lodge. The prison is a modern facility that provides a much more reasonable place for convicts to spend their days.

The Old Montana State Prison has been given new life. Today, it is a living museum that tells the story of the men with dark lives that lived out their days in the prison’s cells.

The complex was leased to the Powell County Museum and Arts Foundation in 1979 when the prison was moved to the new building.

The Foundation worked diligently to clean and restore the old facility and construct a visitor’s center. In 1980, the complex was opened to the public. Today it sees more than 40,000 visitors walk through its doors.

The Old Montana Prison Complex is now listed on the National Register of Historic Places and is home to eight different, unique museums.

Things to See and Do at the Old Montana Prison Complex

It may seem strange, but there are a number of things to do and see while visiting the Old Montana State Prison Complex.

The prison is one of eight museums on the 22-acre former prison complex. There are plenty of great things to see, and plenty of interesting history to learn while visiting the Old Montana Prison Complex.

Take a Tour of the Old Montana Prison

Visitors to the prison will experience the living conditions in the old prison, learn a little about the prisoners that lived there, and learn about the history of the prison as it changed from a territorial federal prison to a state-run prison.

If you’re feeling brave, the Museum even offers ghost tours that run from 9 PM to 3 AM, where you can experience firsthand one of the most haunted places in Montana.

Filled with local artifacts and antiques, this museum tells the history of Deer Lodge and the surrounding area. Some of the “must-see” items in the museum include handmade antique furniture, mining equipment and an old stagecoach.

Check Out Some Cool Classics at the Montana Auto Museum

The Montana Auto Museum could be one of the best collections of automobiles in the United States.

Here you’ll get a history lesson in the modern engine and how it went from being an essential tool for farming, mining, and industry.

The Montana Auto Museum has some unique displays including the Thermador Car Cooler, the first “air conditioning” in a car, the Aqua-Scooter, and a replica of the first “vehicle” created by Karl Benz in 1886.

Walk Through the Wild West at the Frontier Museum

The Frontier Museum is housed in the mule barn for the Old State Prison and features plenty of artifacts from the wild west and frontier.

One of the most impressive displays is the collection of cowboy collectibles including chaps, spurs, and handguns. This museum houses one of the largest collections of antique firearms in the world, with over 300 items on display.

If wild west history isn’t your thing, stop into Desert John’s Saloon Museum. This museum which is part of the Frontier Museum is a fully functioning saloon where you can get a drink and rest your feet before exploring some more.

Other things to see at the Old Montana Prison Complex include the Yesterday’s Playthings, a museum filled with toys and dolls, and Cottonwood City, a replica frontier city that includes the Blood Cabin and Snowshoe Creek School, which were brought to the site and preserved.

It may not seem like a great tourist spot, but the Old Montana State Prison with all of its history and a wide range of things to do and see is a great place to stop on your journey through Montana.

With eight museums, a working saloon, and the great community of Deer Lodge, this is a site in Montana that will thrill the whole family.