As one of seven Native American reservations in the state of Montana, the Rocky Boy Reservation is shared by the Chippewa (Ojibwe) people and the Cree (Nēhiyawak) people.

Headquartered in Box Elder, this area in north central Montana has a storied history and years of perseverance, hardship, and renewal. Read on to learn more about this beautiful reservation, as well as a few nearby favorites.

Located in the Bear Paw Mountains, the Rocky Boy Reservation was established in 1916 by an act of Congress – on September 7th, to be exact. But this land and its story are so much more than a declaration from a governing body of European Americans.

Named for Ahsiniiwin, the Chippewa chief who had just died months earlier, his name was incorrectly translated – from “Stone Being” or “Stone Child” to “Rocky Boy.” Talk about being lost in translation!

While the land was originally meant for landless Ojibwe (Chippewa) people forced out of Minnesota, it soon expanded to include the Nēhiyawak (Cree) people and Métis people – a real initial point of contention for the Chippewa.

These days, the Cree outnumber the Chippewa people, and it currently stands as Chippewa Cree land.

Located about 40 miles from the United States-Canadian border, the Rocky Boy Reservation has over 3,000 enrolled members and sits at over 170 square miles – but its history has a unique place in American culture.

Chief Ahsiniiwin – that’s Chief Rocky Boy for those following along – wrote to the Bureau of Indian Affairs and President Theodore Roosevelt in 1902, asking the US government for a home for his Chippewa people.

People often romanticize nomadic Native Americans following their roaming buffalo, but this chief and his group of 130 people were forcibly removed from their Minnesota homes – so he took action.

Working with Republican Senator Joseph M. Dixon, writer Frank Bird Linderman, painter Charles M. Russell, and others, Chief Ahsiniiwin got to work. Linderman and Russell, in particular, were dedicated advocates for indigenous tribes of the area, having spent time immersed in their cultures.

After a number of early 1900s clashes and rebellions (Swan Valley Massacre, North-West Rebellion), as well as disturbing attacks from state officials, the search for a stable homeland continued.

The Chippewa and Cree originally settled on the Blackfeet Reservation before seeking asylum at Fort Assinniboine in Hill County. Acting as a tireless advocate for his Chippewa people, Chief Ahsiniiwin negotiated additional lands and educated the Indian inspector of the time.

In an ironic twist of fate, these native peoples had to work to regain autonomy from European American settlers in a land that was originally theirs.

But once the reservation was established in 1916, the Chippewa and Cree Indians still had to work to protect their sacred beliefs, as well as their peace pipe religion. Notably, Mary Chippewa Gopher, or Iron Claw Bear Woman, fought for tribal sovereignty that remains a fight today.

In the current day, a number of revived cultural institutions have emerged to maintain an in-tact spiritual presence. From sweat lodges to dances, the people at Rocky Boy Reservation still strive to make the most of an initially bad situation – and to practice with their community in peace. 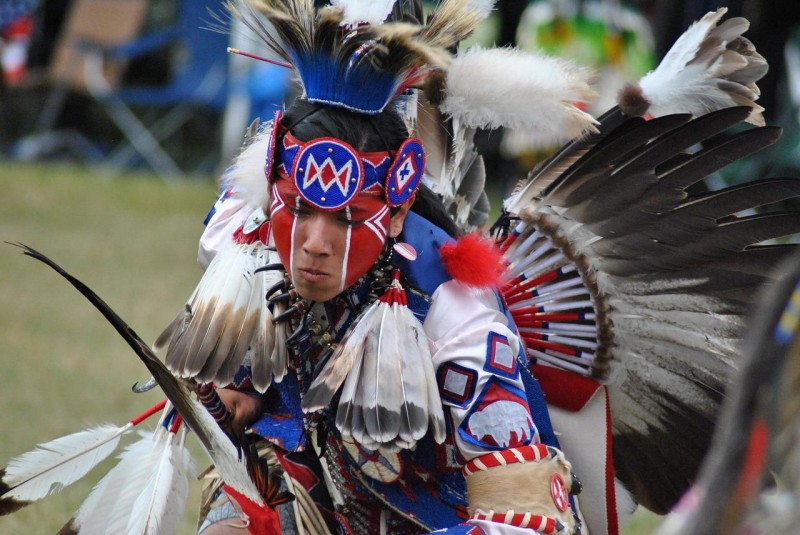 While many of the Chippewa and Cree members are now Christian, they still hold strong cultural beliefs. Their Sun Dance, or Thirst Dance, is held the first week of July – and it is truly a spectacle of cultural immersion.

Likewise, their annual Pow Wow is held the first week of August, providing plenty of opportunities to connect with their ancestral traditions in an increasingly modern world.

They do also have a buffalo pasture, regained from the American government, as well as local businesses meant to uplift the community out of potential poverty.

The Northern Winz Casino is a must-see in the area, but it’s the natural surroundings that provide the richest background for a long-sustaining culture. (More on that below!)

The community also has its own educational institutions – public schools and a tribal college. And those who have branched out from the community are working to keep its presence alive at a national level: Bryson Meyer, or White Elk, is a descendent of Chief Ahsiniiwin who spends his time educating people through art and poetry.

Others are working within the community to support indigenous businesses, from restaurants to podcasts to Indian taco stands.

Let’s learn more about some nearby attractions that make the area even more beautiful!

Rocky Boy Reservation may be the smallest reservation in the state, but it holds its own with nearby attractions. Nestled in the Bears Paw Mountains along with the reservation is the beautiful Beaver Creek Park, which offers numerous hiking trails, camping, and picnic areas.

Open year round, this spot covers 10,000 acres and encourages outdoor recreation to its fullest. And interestingly, the reservation boundaries would have originally included this land, but it was unfortunately removed from the Congressional act.

A little over 2 miles in length, Mount Otis Trail leads to a 360 view of the Bears Paw Mountains, while the Bear Paw Nature Trail is almost 6 miles long and is known for its berry bushes, open meadows, and wild groves.

Our favorite is Rotary Canyon Loop Trail, which has a 2-for-1 feature: a 1-mile lower loop and a 2-mile upper loop.

This trail in particular looks out over beautiful Bear Paw Lake, and it’s easy to see why Chippewa and Cree have taken to the area once you get to the top (bring your fishing pole for Bear Paw Lake – it’s filled with trout!).

Once you’re done taking hiking selfies, we suggest a drive up to Havre to visit Bow & Marrow, a restaurant loved by omnivores and vegetarians alike.

Since you’re already in Havre, we’re big fans of the Wahkpa Chu’gn Archeological Site. Acting as a buffalo jump spot over 2,000 years ago, this site has extensive archaeological materials available for the public – bison skulls, a boiling pit, and more.

But the most exciting feature of the Wahkpa Chu’gn site is that it offers a space to learn more about prehistoric life through the eyes of the Besant, Avonlea, and Saddle Butte people. Communal hunting and buffalo went hand in hand, and this area presents unique immersion opportunities.

Where else can you throw an atlatl, the weapon of choice for buffalo hunters of the time? When we say that native people lived and thrived on this land long before European settlers arrived, this archeological site points definitively to that experience.

Daily tours from Memorial Day to Labor Day from 9 am to 4 pm.

There are plenty of recreational opportunities on and around the reservation – beyond Beaver Creek Park, that is. If hunting is your thing, tribal members can show you how to hunt with respect for the animal and the process.

Game birds, beer, antelope, elk, so many options! Just remember that if you’re a non-member on the reservation, you’ll need a permit to access these sacred areas.

If cross country and downhill skiing lights you up, the reservation has the Bear Paw Ski Bowl, a fully operational, tribal-owned ski area. Because we like supporting the community, this is our go-to spot for a day on the slopes. And our favorite spot to rest our legs after a long day?

It’s located in nearby Big Sandy and it’s appropriately called The Motel. Definitely our number one recommendation! Otherwise, Havre has plenty of hotels to take advantage of, but our go-to is Best Western! Who doesn’t love an indoor pool?

After years of perseverance and political angling from Montanan and federal folks, the Chippewa and Cree Indians found allies and advocates in a few select empathetic individuals. Sometimes all you need is a few good people in your corner!

The tribal members of Rocky Boy Reservation do their best to thrive and give thanks for what land they do have, as well as educate other Americans about their culture and plight.

We love this reservation for its small but mighty charm, tight-knit community, and plentiful opportunities to be in nature. Let us know in the comments if you’ve visited and what you loved most about Rocky Boy Reservation!