A massive protected area encompassing over a million acres, the Charles M. Russell National Wildlife Refuge is made of a patchwork of sites that straddle the Missouri River from the breaks almost all the way to State Route 24.

It’s the largest refuge of its kind in the lower 48 states and has extensive infrastructure for visitors scattered throughout.

The seat and the only fully staffed refuge in the greater Charles M Russell Wildlife Refuge Complex, the rangers here oversee far more than just the refuge itself, they are charged with managing five other sites as well, including the adjoining UL Bend National Wildlife Refuge.

It’s also a stop on Montana’s Dinosaur Trail, so there are staff members on hand that deal specifically with the paleontological history of the region at the Interpretive Center.

Though settlers dramatically changed the landscape of what is now Montana via agriculture, overhunting, and rerouting and damming water systems, much of these lands remain relatively untouched since the first round of them arrived.

It wasn’t a particularly popular place to homestead, and other than the Fort Peck Dam itself the region is largely unchanged. Many of the original native flora and fauna still proliferate the refuge, a key component of preservation efforts.

Though the refuge is open year-round, activities here can be somewhat seasonal. Hunting seasons for small and big game and bird migrations occur in the spring and fall, while summer is when folks bring boats to explore the river and reservoir.

Beginning in October, one of the refuge’s most intriguing spectacles occurs near the Slippery Ann Wildlife Viewing Area when hundreds of elk congregate before winter sets in.

It was originally called the Fort Peck Game Range when it was first established by President Roosevelt in 1936 but was renamed in 1963.

Now the refuge’s name honors the legacy of famed Montanan painter and naturalist Charlie Russell, who spent his career committing the natural beauty of these unique lands to canvas. 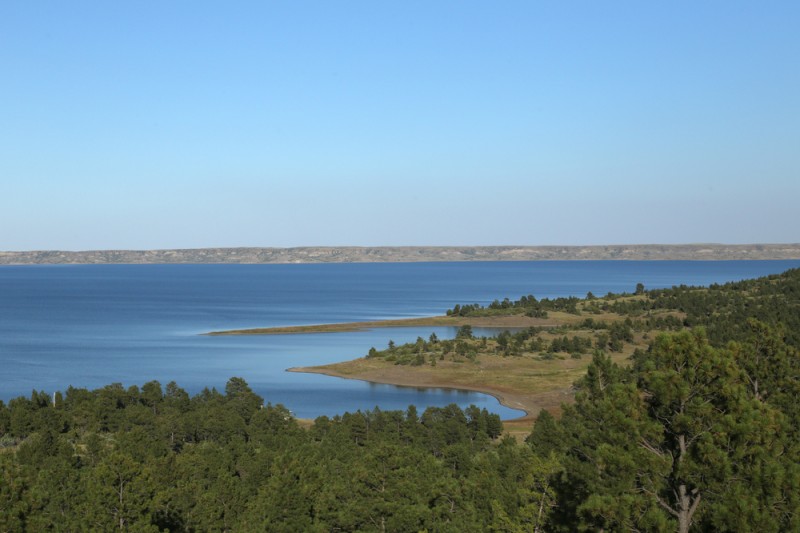 The Charles M. Russell National Wildlife Refuge is a vast protected site with a solid infrastructure for visitors.

Trails, roads, and paths are often marked with signage and interpretive displays, and there are important historical or geological features in the park that are well displayed and explained.

While you can find about the refuge’s intricacies onsite, here are some of the major attractions within it.

In addition to helpful information and guides to the refuge, you’ll find facilities for travelers, paleontology and wildlife exhibits, and accessible hiking trails that lead to a campground nearby.

The gem of the Interpretive Center is Peck’s Rex, a reconstructed Tyrannosaurus Rex skeleton that was found nearby in 1997.

There are many other exhibits, including other paleontological examples of dinosaurs found in the region, taxidermied local wildlife, and those that delve into the unique geology around the Missouri River.

You may need an appointment to visit, so be sure to give them a call in advance to find out their current hours.

While the marina draws thousands of visitors a year to use its launch site, rent boats, and charter day tours, the Fort Peck Marina has many other facilities onsite for visitors. The restaurant alone is a popular stop for people in the area, but the bait shop,

There are several recreation areas in and around the Charles M. Russell National Wildlife Refuge that are managed by other government agencies.

Between the TK, the Bureau of Land Management, and the US Army Corps of Engineers, the latter oversees the most, with a total of 27 sites in and around Fort Peck.

Though they certainly vary in what facilities and amenities they offer, many have boat ramps, picnic areas, and even campgrounds, and most of them are free.

As you would expect on grounds so vast, there is a lot to do in the Charles M. Russell National Wildlife Refuge. Here’s a brief overview of some of the most popular activities for visitors.

Stemming from Highway 191 is a self-guided auto tour that traverses the western part of the refuge, passing prairies, rangeland, and the mighty Missouri River.

Along the way, there are several stops for visitors to peruse, each one outfitted with interpretive displays that delve into the history, geology, flora, and fauna of this singular region.

Total, it’s just under 20 miles long, but you should allow two or three hours to complete the route to leave time for stops and photos. Find more info here.

The Fort Peck Reservoir and the Missouri River invite anglers to try their luck on the refuge. To participate, you should hold a Montana Fishing License and adhere to all federal and state fishing regulations.

You can expect to find pike, paddlefish, walleye, and sauger on the refuge, often in incredible quantities.

Hunting is permitted in designated areas within the refuge, though hunters are required to have a Montana hunting license, follow seasonal guidelines, and certain species may require additional permitting.

There have been many initiatives in the refuge to offer accessible hunting, including two accessible blinds that are available to the public.

The Hell Creek Blind (near Hell Creek State Park) has windows that can accommodate hunters utilizing rifles, crossbows, and a bow and arrow, and is in a prime location for big game hunting. The Manning Blind (about 10 miles east of the Fred Robinson Bridge) offers 360-degree views and 6 sliding windows.

Both are and are easily reached via a maintained path from a designated parking lot.

There are many marinas and boat launches scattered throughout the refuge that visitors can use for a myriad of crafts.

If you’re coming from out of state, you must ensure that your craft is clean so as to not inadvertently introduce a non-native species; this may require an inspection.

Both motorized and non-motorized craft are permitted in the reservoir and on the Missouri River, though the former may be subject to seasonal rules and limitations.

If you plan on bringing a motorboat, you should contact the Visitor’s Center in advance of your trip to check on current rules. 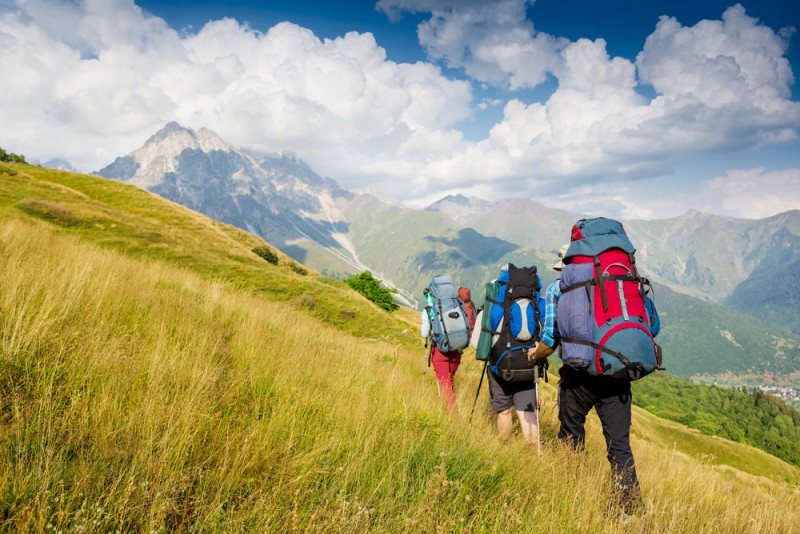 Hiking is allowed anywhere in the refuge, though there are some designated trails, well-worn paths, and roads that are already established for visitors.

On the east side of the refuge, particularly near the Fort Peck Interpretive Center, there are several paved, fully-accessible trails. Trails within the refuge can also be used by folks on horseback.

Portions of the refuge also fall under the jurisdiction of other agencies, and you will see this reflected in its campsites.

The U.S. Fish and Wildlife Service does oversee the refuge, but only insofar as preservation, conservation, and water management aspects are concerned.

Most of the campsites, while they are within its borders, fall under the auspices of one of three agencies that manage them: the Bureau of Land Management, Montana Fish, Wildlife & Parks, and the US Army Corps of Engineers.

There are also a few private campgrounds nearby as well, which generally have more robust amenities like full RV hookups, running water, and sometimes electricity.

But if you want to eschew amenities altogether, backcountry camping is allowed anywhere within the refuge permitted that you are not impeding a road or trail, or irreparably disturbing the grounds.

A private facility that specializes in group adventure tourism, the staff at Dovetail Creek Campground can help you plan an entire outdoor vacation. They can not only host you and your party but also arrange for hunting or fishing trips nearby.

With a host of amenities not always available at sites managed by the US Army Corps of Engineers, Crooked Creek Campground has a boat dock, a swimming beach, and potable water right on site. Each campsite is outfitted with a picnic table and a fire ring, and there’s a nearby marina with boat and cabin rentals.

An extremely remote site, the Devils Creek Campground is located on the south shore of the Fort Peck Reservoir.

Despite its excellent location and amenities like a boat ramp and vault toilets, the access road is long and can be somewhat rough: visitors are advised to bring enough food and water for a few days just in case it becomes impassable due to weather or otherwise.

Though there is no electricity or water available, Fourchette Bay Campground has a boat launch, vault toilets, some picnic shelters, and even a few excellent concrete campsites for RVs. It’s pretty remote, but the lack of light pollution offers incredible stargazing.

Just four miles north of the refuge, Buffalo Camp is a private facility located on a plain where buffalo literally roam. They cater to both tent and RV campers, and sites can be booked online.

A recreation area right on Fort Peck Lake, the Pines Campground features a boat ramp, a fish cleaning station, a playground for kids, and a shade shelter. Each campsite comes with a picnic table and a fire ring, though there’s no running water or electricity.

Accommodating both travelers with tents and RVs, the West End Tent and Trailer Campground is one of the best outfitted overnight recreation areas in the refuge. You can reserve sites on the day-of online.

Just below the Fort Peck Dam, Downstream Campground is one of the most popular campgrounds in the entire region.

It’s easy to access, has amenities that make traveling with families much more comfortable, and has perfect access to the Fort Peck Reservoir. If you’re bringing your RV, most of their sites have electrical hookups.

Though there are only about 10 sites here, the Roundhouse Point Campground can be a great place for groups as it’s usually easy to snag a few adjacent campsites provided you arrive early.

Though the facilities are pretty bare-bones, this campsite is managed by the ACE and is completely free.