One of the most popular modes of travel through Montana is the train. Train travel has been a convenient and affordable option in Montana since the first rail lines were constructed in the late 1800s.

Being that rail travel has a long history in Montana, it’s not a surprise that Montana train stations are both useful for travel, but also serve as unique windows to the past.

Today, many of Montana’s train stations house museums as well as being hubs for travel within the state.

The Belton Historic Train Station is located in West Glacier. This sleepy town was once a hub for train travelers coming to Montana to experience the glories of Glacier National Park.

Constructed in 1910 and then expanded to meet larger traveling crowds, the station is historically known as the Belton Depot. In 1991 the depot was donated to the Glacier Natural History Association.

This organization renovated the depot, paying particularly close to the previous use and cultural history of the area.

Today, the Belton Train Station is still a functioning train station, though it doesn’t accommodate travelers in the same way it once did. Considered a “whistle stop” station on the Amtrak Empire Builder line, the Belton historic train station is now more museum than it is a train station.

However, it is a great place to check out when you are in the area.

The Browning train station was once known as Fort Browning and was part of the Great Northern Railway. There was once a full-service station at Browning, but today it is just a platform with a small, covered area.

The old depot was demolished in 2013 as it was in disrepair and was no longer safe for travelers.

The Browning train station only serves customers between October and April. It is the main rail station for Browning, MT, the Blackfeet Reservation, and the access to the eastern part of Glacier National Park.

The Browning train station is served by the Amtrak Empire Builder line.

Located in Cut Bank, MT, and served by the Amtrak Empire Builder, this train station is either the first or last place along the line where travelers will view the Rocky Mountains.

The Cut Bank station was built in the Swiss chalet style in 1918. Its architectural style inspired the many buildings constructed in Glacier National Park during this same time.

The Cut Bank station was renovated in 2010 during the Cut Bank Chamber of Commerce’s annual “Make a Difference Day”.

Community volunteers painted the building and made repairs to the structure so that it looked much like it did over 70 years ago.

This rustic train station was constructed by the Great Northern railway in 1912. It is located next to the historic Glacier Park Lodge which was built in the same style and opened for visitors in 1913.

The depot looks much like a rustic log cabin, but on a larger scale. The interior of the train station is warm and inviting and is home to many displays that provide visitors and travelers with information on the park and its history.

The East Glacier Park train station is only open seasonally, from mid-April to mid-October. During the winter season, travelers use the Browning station.

The Essex Montana train station is a flag stop along Amtrak’s Empire Builder line. The original Essex train station was the Izaak Walton Inn which is located less than a half-mile from the current station.

When the Izaak Walton Inn was built, the residents in the area campaigned to have the Inn serve as an additional entrance to Glacier National Park. They were unsuccessful in their efforts. The Inn is still in operation today, along with the new train station.

The old inn is a massive structure looking oddly out of place in the wilderness. The modern train station, which serves few travelers, is a platform with a few shelters for travelers. 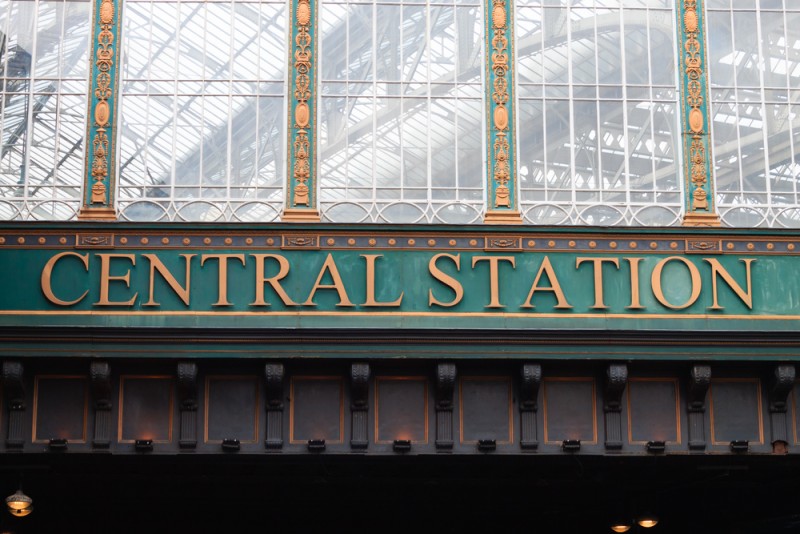 The town of Glasgow, MT was established by the Great Northern Railway in 1887. The Glasgow station has been a hub for both travel and commerce in central Montana.

The Great Northern Railway company and the town of Glasgow served farmers and ranchers in the area who depended on the railroad for shipping their crops and livestock.

The station at Glasgow looks like many of the traditional train stations of Europe with a hipped roof, a belt course, subway tiles, and terrazzo floors.

Visitors to this historic station can explore the Valley County Pioneer Museum, located in the station. This great museum has displays that cover everything from dinosaurs and wildlife to native cultures and the history of the railroad.

The Charlie Russell Chew Choo is a converted passenger train that embarks on a 4.5-hour journey through the plains of Montana. Passengers on this train enjoy not only a scenic train ride, but the ticket price for this train also includes dinner.

The boarding station at Hanover is not developed, and there are no amenities or shelters for passengers to utilize while they wait.

Havre, MT is a busy location for train activities. The Havre train station is a hub for both freight operations and passenger operations.

Like many other towns along the Empire Builder line, Havre was established as a railroad town by the Great Northern Railway in the late 1880s. The original train station was nothing more than a renovated box car. The first permanent station was built in Havre in 1904.

You’ll not find the station that was built in 1904. The depot has had a substantial renovation, with the first remodel completed in 1910.

The first remodel increased the size of the depot to accommodate the many homesteaders that were coming to the area to find a new life. The 1910 station was remodeled in 1949, following World War II.

The station today has a unique two-tone brick exterior. Inside the lower level serves as the train station, while the upper levels house offices for the Burlington Northern Santa Fe (BNSF) Railway.

The Libby train station was first established in the 1890s by the Great Northern Railway, along their main line through Montana.

The train station has always provided both freight and passenger service. The railway was the base of the Libby economy for many years.

The train station itself was constructed in the early 1900s in the Swiss Chalet style, as a reflection of the region’s nickname, “The American Alps”.

The station in Libby is relatively unchanged from its original 1900s construction. The interior of the station has many of the original architectural features from the early 1900s.

The platform at the Libby train station was upgraded by the Burlington Northern Santa Fe Railway, in 2012. The platform is 500 feet long and is handicap accessible.

The town of Malta shares its name with a small Mediterranean island. It is located east of the Fort Belknap Reservation. The train station in Malta is very similar to those found in Libby and Cut Bank.

It was built in the Swiss Chalet style and features clipped gables and large overhangs, supported by decorative brackets. The overhangs protect passengers waiting for arriving trains.

The station is used as a waiting area for travelers waiting to board trains. It is also used as an office for BNSF crews that maintain the tracks along the Empire Builder line.

The Shelby, MT train station is a simple building sitting at one of the most important railroad junctions in Montana.

Shelby and its train station were established in 1891 by the Great Northern Railway as a junction point between its main line and the line that would travel south to Great Falls, MT, and north to Alberta, Canada.

The one-story, wood station is used as a waiting area for the Amtrak Empire Builder as well as offices and facilities for a small crew of BNSF employees.

Today, Shelby sits in the “Golden Triangle”, an area in Montana known for its rich farmland. The BNSF railroad and the Shelby station also support the transport of barley, wheat, and mustard seeds from farms surrounding Shelby.

The train station at Whitefish, MT is perhaps one of the most dramatic along the Empire Builder line. The Whitefish depot was constructed in 1928 and incorporates many Craftsman and Alpine-style architectural elements.

Stand-out features of this station include the large timber supports for the roof’s overhangs, the clipped gable roofs, and dormers.

The station was abandoned by the BNSF Railway in the 1980s as the structure fell into disrepair. In 1990 the building was purchased by the Stumptown Historical Society. This organization rehabilitated the building and returned it to its previous glory.

Today, the building is leased to the BNSF Railway and houses not only a waiting area for the station but also a museum, offices, and stalls for local vendors.

In 2002 in recognition of the importance the building played in the region’s history the Whitefish Depot was added to the Nation Register of Historic Places.

The Wolf Point train station is located along the Missouri River and the BNSF railroad tracks. This station was built in 1963 and replaces an early train depot that was purchased by an outside party and moved to another location.

The station at Wolf Point was further improved in 2021 by Amtrack with the construction of a new platform, lighting, and improved accessibility features.

Wolf Point was once a refueling point for the steamboats that were the main mode of transportation on the Missouri in the 1870s and 1880s.

The area was used as a trading post for trappers, traders, and Indians. When the railroad was constructed through Wolf Point the trading post grew into a larger community.

Today, visitors come to Wolf Point on the Amtrak Empire Builder line, many to see the Wild Horse Stampede, the largest rodeo in Montana.