With a population of 632, Walkerville is a small historic town that primarily serves as a suburb of the larger community of Butte.

Home to one of the oldest mining sites in the area, Walkerville features several historical sites while maintaining nearby access to the many services and attractions of the city.

When miners struck silver north of Missoula Gulch in 1872, they triggered a population boom in the region and attracted immigrants from across the country. One such miner lured by the promise of riches was Rollo Butcher.

Three years after the original deposit was discovered, Butcher located one of the richest silver mines on the hill, the Alice. To service his newfound mine, Butcher established the first permanent residence in the region that would later become known as Walkerville.

Sending their agent, future Copper King Marcus Daly, the brothers promptly purchased the mine from Butcher and gave birth to the town of Walkerville.

While other investors were present in the town, the region was primarily dominated by the Walkers. They owned the general store, the Alice Hospital, the Alice Reading Room, the Alice Fire Department, and even the entire Alice Mine and Mill Band.

Walkerville was officially incorporated in 1890, and the Alice Mine’s superintendent, William Hall, was instated as the community’s first mayor.

A cable car was established in 1889 that connected Walkerville to Butte, and the two communities rapidly grew until their borders began to seemingly overlap.

While Walkerville is often overshadowed and considered a suburb of Butte, the small community maintains its independent identity. It is the only other incorporated community in Silver Bow County besides the city.

The town’s many restored and preserved buildings, landmarks, and streets continue to bear the influences and names of the historic residents that had worked to shape the town as we know it today.

Visiting Walkerville is an essential experience when traveling to Butte to understand the history and development of the local mining history of Silver Bow County.

Only a short distance from downtown Butte, Walkerville offers easy access to all of the city’s diverse attractions.

However, the actual draw of Walkerville is the preserved buildings in its district, and the town’s top attractions all involve exploring the community’s rich histories. 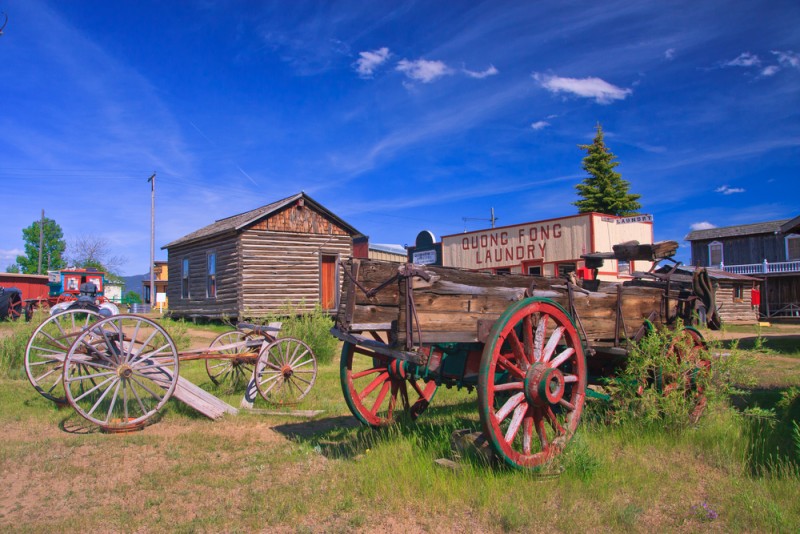 Located on Orphan Girl Mine, an actual mine yard that operated in the region, the World Museum of Mining works to preserve the history of the industry that flourished in the area for over a century.

While the mine is the museum’s centerpiece, the facility also includes exhibits that display the development of the mine’s silver, lead, and zinc production from 1875 to 1956.

The museum offers tours of the mine up to the hundred-foot level. On the tour, guests will explore the tunnels where thousands of men rigorously worked for riches, a pursuit that often proved fatal for many workers.

Also presented in the World Museum of Mining are the Roy Garret Rock & Mineral Collection, Samie Keith Doll & Dollhouse Collection, a Photo Archives, and a Memorial Wall & Remembering Garden dedicated to those that lost their lives working the mine.

Constructed from 1884 to 1888, the Copper King Mansion was initially commissioned and owned by William A. Clark.

Along with Marcus Daly and F. Augustus Heinze, Clark was one of the principal developers of the copper mining industry in the Walkerville region. Together with his contemporaries, the three were dubbed “The Copper Kings.”

Guests can further explore the lavish luxuries of the mansion, including a sixty-four-foot ballroom, a billiard room, a chapel, and a library.

To enjoy the complete luxury of the Copper King lifestyle, the mansion offers its rooms to guests and operates as a Bed and Breakfast in the area.

At the Copper King Mansion, guests can adopt the lives of Walkerville’s wealthiest historical residents for the duration of their stay.

The Speculator Fire Disaster occurred on June 8, 1917, killing 168 men and marking the most significant loss of life ever in hard-rock mining’s history.

In 1996, ninety-seven years after the accident, the community of Butte erected a memorial honoring the 168 lives lost.

The Granite Mountain Memorial invites guests to explore the lives of those involved in the accident while enjoying panoramic views of the beautiful east ridge and the surrounding remnants of the region’s mining industry. 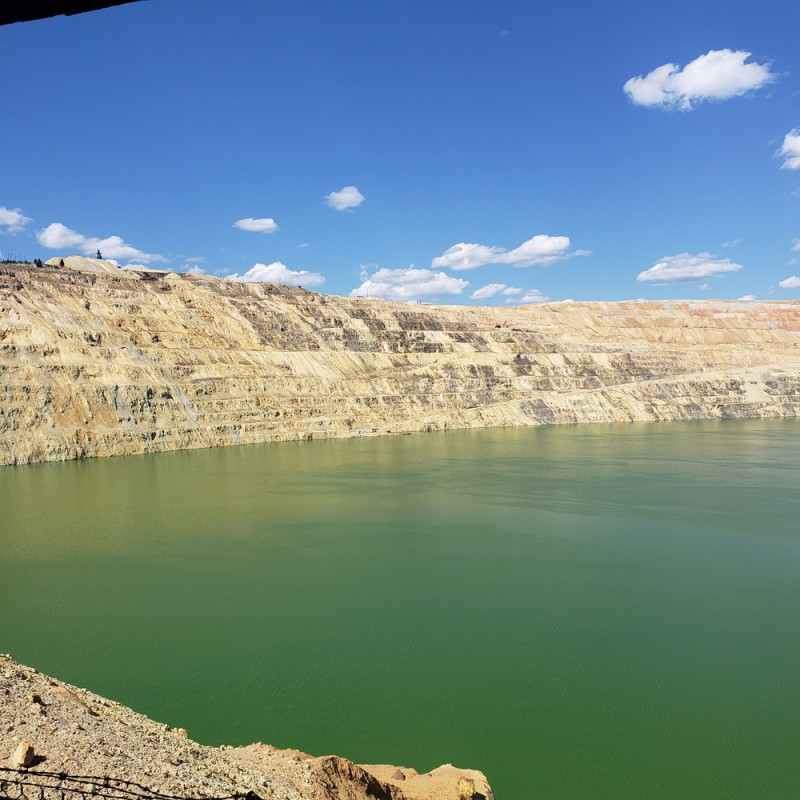 Opened in 1955, the Berkeley Pit was a massive copper mining operation that helped Butte earn the title of the “Richest Hill on Earth.” By 1980 over 1.5 billion tons of material had been mined from the pit, including more than 290 million tons of copper.

Over the years, the massive pit has become filled with acidic water with high concentrations of toxic chemicals and heavy metals, including copper, irons, zinc, cadmium, sulfuric acid, and arsenic.

However, the pit’s oddest curiosity is that new fungal and bacterial species have been found to have adapted to the hole’s highly toxic and volatile conditions.

Today, visitors to the pit can observe the colossal hole from a viewing platform that is a safe distance above its chemical waters.

Beyond the town’s vibrant historical sites, Walkerville offers a massive selection of outdoor activities for visitors to experience the wonderous countryside of Silver Bow County. 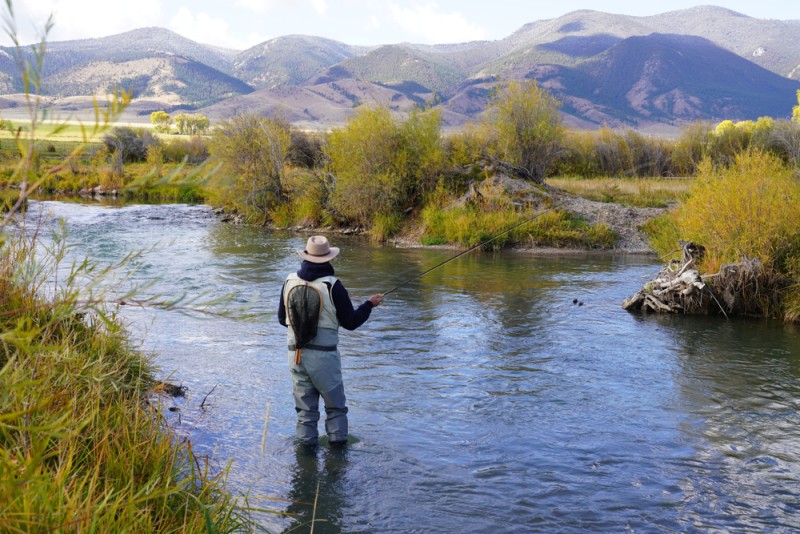 There are plenty of fun fishing spots to explore Walkerville’s many surrounding bodies of water.

Alternatively, wranglers can head to the nearby Delmoe Lake. Among other native species, the lake is one of the best spots in the area for catching Westslope and Yellowstone Cutthroat Trout, the two official State Fish of Montana.

Walkerville has many fantastic hiking trails weaving through its countryside, but one of the best ways to explore the region is along the Big Butte Trail.

The 1-mile hike features an elevation of about 1300 feet and offers breathtaking views of the county.

Beaverdam Campground offers one of the best outdoor camping experiences for those traveling to Walkerville.

The grounds are fully-serviced with picnic tables, toilets, drinking water, and parking and are located along Divide Creek providing fantastic fishing opportunities.

Located close to Butte, visitors to Walkerville will find plenty of options for accommodations.

As a suburb of Butte, MT, Walkverville residents, and visitors will have plenty of opportunities to partake in the many annual festivals and events that occur within the city.