Lewis and Clark Caverns State Park was the first established state park in Montana and is hence the best-known. You can find this state landmark just east of Whitehall and discover how it is one of the largest known limestone cavern systems in existence.

Even though local Montana residents have been exploring the caves for hundreds of years, the Lewis and Clark Caverns was first officially discovered in 1892 by a group of local hunters. They were probably oblivious to the fact that the caverns would set a precedent by becoming Montana’s first state park.

Visitors to the Lewis And Clark Caverns State Park are enthralled by the spectacular-looking caves lined with stalactites, stalagmites, and various other natural formations. The caves have natural air currents and passages running through them as well as electrical lighting.

Visitors come from all over to explore the limestone formations with their impressive colors in the lit caverns. You can take a guided tour to learn about the geologic development and history of early exploration in the area, and the caverns are safe and well-lit, not to mention well-ventilated, which makes the underground experience pleasant enough.

The park also features trails, a visitor center with interpretive programs, an amphitheater, picnic areas, and a campground which are all open year-round. The site covers more than 3,000 acres and reaches elevations over 5,000 feet.

This site is an ideal location for visitors to the region to use as a base from which to explore a few other state parks and attractions in the vicinity, including the adjacent Jefferson River.

Some of the amenities and features in the park are available on a seasonal basis such as water, showers & the comfort station, and you’ll find these accessible between May 2 and Sept 30.

Non-resident fees apply — $8.00 for entrance with a vehicle and half of that on foot or with a bicycle. 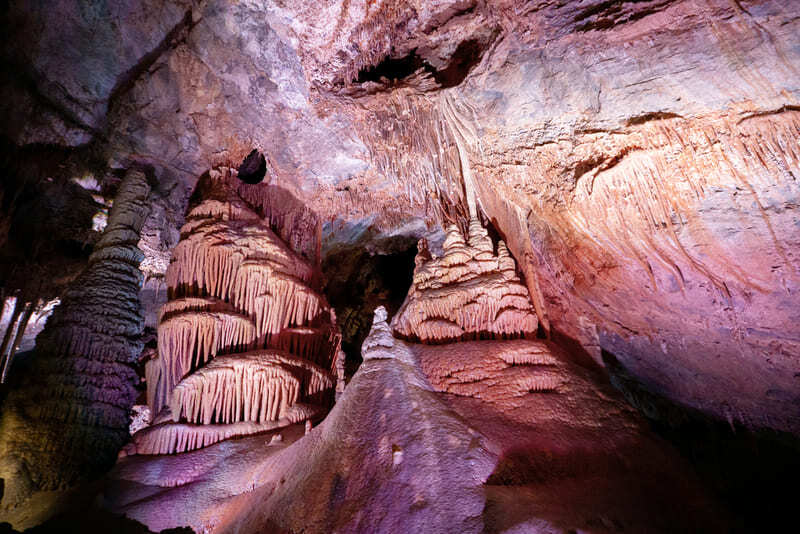 The two visitor centers in the state park serve as the initial focal point for many visitors. During the summer months, the state-of-the-art centers put on interpretive displays and various other programs.

The hours of operation during the summer months are daily between 8.30 am and 4.30 pm. The limited winter hours are operated between October 7 and April 13, Wednesday to Sunday, from 10 am to 4 pm.

Guided tours are the only way to access the caves between May through September although tours are offered in December with candlelight. The center puts on two tours – the Classic and the Paradise.

The first one covers most of the main cave but can be quite challenging physically for some people, while the Paradise tour focuses more on the biggest and most decorated caverns. Limited tickets are available for each tour and are operated on a first-come-first-served basis.

You should allow a minimum of a couple of hours for the guided tour through the caverns, and the self-guided nature trail beginning from outside the visitor center is another way to get insights into the natural surroundings of the state park.

Other nearby attractions include a golf course and more museums located in the vicinity of Three Forks and Whitehall. 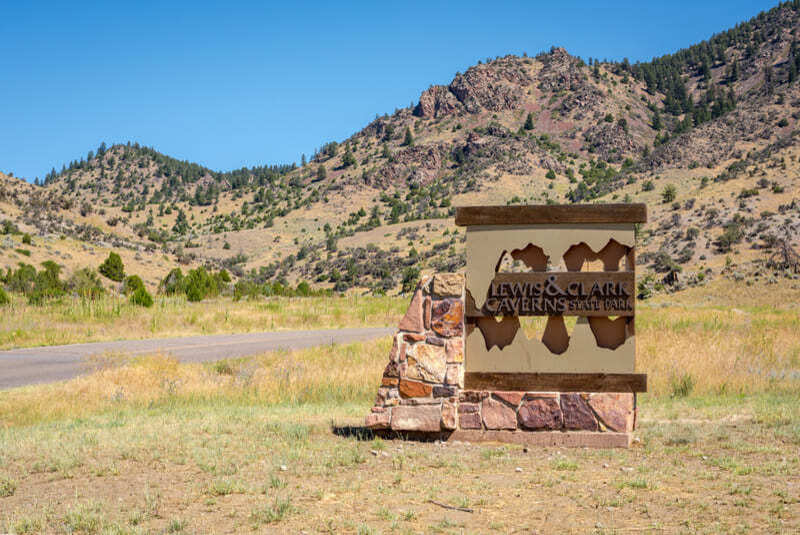 The park features a large, 40-space campground which includes 3 camping cabins, a tipi, picnic sites with tables, flush and vault toilets, showers, a group use area, an RV dump station, grills, and fire rings, drinking water, and has available firewood.

The cabins can accommodate up to six people and allow disabled access. Each cabin has its own fire ring, and pets are allowed in and around the sites if leashed. Electric lights and plug-ins are provided, and the shower facilities are located nearby.

Some of the sites including the cabins are available for reservations, as is the group camping area, yet visitors should again take note of the fact that water is turned off in the winter months between October 1 and April 30. This means that flush toilets, showers, drinking water, and RV dump facilities are available only during the summer.

The trails feature much flora and fauna along with several ecosystems, meaning you have the chance of glimpsing various kinds of animals, birds, plants, and flowers along the way.

Large stretches of the upper south-facing slope terrain are borderline desert, yet the likes of mule deer and black bears are commonly sighted in the park.

Birding is still probably the main wildlife viewing activity within the park with its hundreds of different bird species.  Hiking the park trails is one of the best ways to get a look at everything from raptors to mountain bluebirds, especially if you have your binoculars to hand. 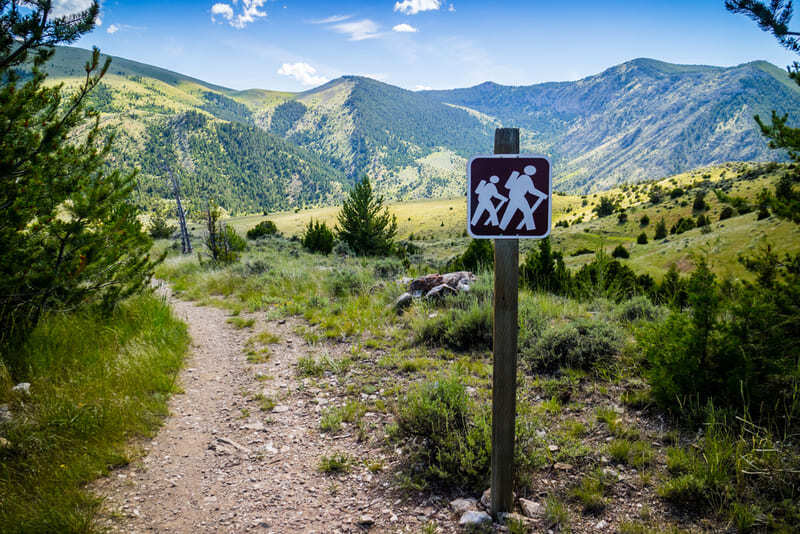 The trail system in the Lewis and Clark Caverns State Park provides routes of varying difficulty which allow the visitor to experience different aspects of the park above ground.  The trail system covers about 10 miles and includes more than 1000 feet in terms of elevation changes.

The two main trails are actually the most challenging when it comes to elevation gain or loss, but you can still find others that allow something of a more relaxed wander through the regions of the park. You can also find a PDF of the various map trails here.

If you prefer a leisurely hike that doesn’t prove too challenging, the short Nature Loop Trail is an ideal quarter-mile trail near the upper picnic area in the park. It features various signs to help interested nature-loving visitors identify, and you’ll also get the best views of the wildflowers in this trail.

This trail is of moderate difficulty and is an extension of the Nature Loop up to 2 miles.  From this trail, you can take in the expansive panoramic scenes which include the peaks of the Tobacco Root Mountains in the not too far away distance, and there are also chances to see the bitterroot flowers if you get up here in June.

There are various other options that can be accessed from this trail such as the historic Danmore Gypsum Mine Trail. You can still see the mine from the trailside and its interpretive signs inform of historical and geological information.

If you jump on to the Danmore Mine Trail from the Cave Gulch Trail you cover a 2-mile round trip. 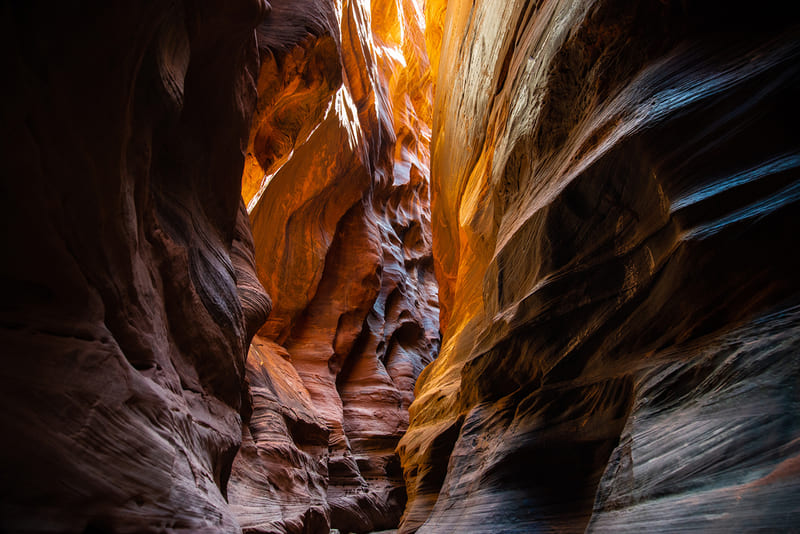 This trail is the one for anyone looking for a hiking experience leaning more towards the challenging. With gains of almost 1000 feet in elevation, this trail takes you across the best part of 2 miles from the campground up to the Cave Visitor Center.

The Cave Gulch Trail is the steepest trail of them all and winds its way across 4 miles on the east side of the park up to the Cave Visitor Center.

The Douglas Fir Forest that covers much of the northern-facing slopes of the park also features quite heavily on this trail providing the necessary shade.

If you have limited hiking time you can take the Cave Gulch via the Middle View Loop and complete less than 3 miles starting and ending at the Cave Visitor Center.

If you would rather go trekking on a still longer trail then this combination loop may be more up your street. It takes in Danmore Gypsum Mine, Middle View and Eastside Trail Loop and covers more than 6 miles in total.

This trail is rated as moderate and has fairly heavy traffic. It features some incredibly scenic views and is used mainly for hiking, with a few groups on nature and bird watching trips being likely along the way.