Montana is home to North America’s only commercially mined sapphire industry. Millions of carats of Montana Sapphires have been produced, and at least a million cut stones have entered the world’s jewelry market.

In this article, we will look at the history of sapphires mining in Montana as well as where the industry is today and how you can experience gem mining in the Treasure State for yourself.

Sapphire Mines in Montana – A Guide

While the Treasure State may be best known for its historic gold rush, it is the sapphire that has become Montana’s stone of choice. Visitors to the state would be remiss not to delve into the fascinating history of Sapphire Mines in Montana. 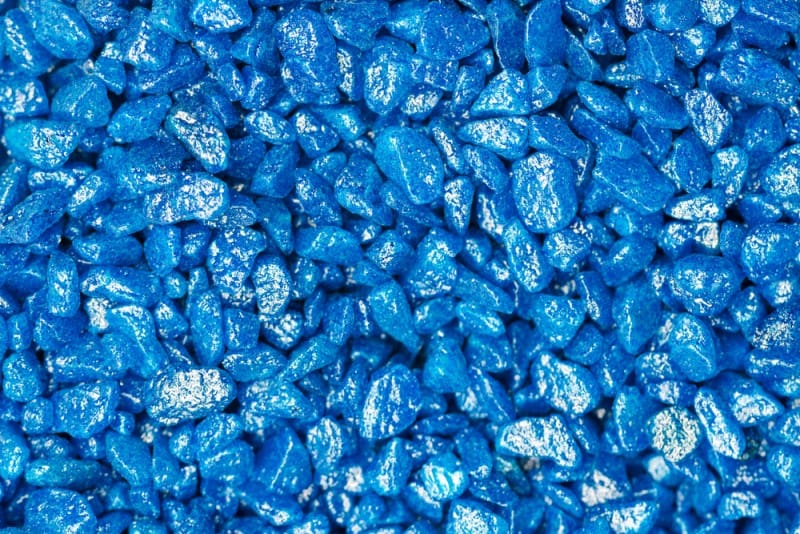 The History of Sapphire Mining in Montana

Sapphires were first discovered flowing through the Montana Rivers during the gold rushes in the 1860s.

Prospectors did not recognize the gemstone at first, since these particular samples were not the traditional blue that the high-valued gemstones were known for. Instead, these Alluvial Sapphires came in a series of colors, typically in hues of yellow and white.

It wasn’t long before these stones were identified as being Sapphires. Yet, thanks to their lack of coloration, they continued to garner only a meager market value.

Rumors quickly spread, and knowledge of these low-value Sapphires was well established throughout the state amongst prospectors.

When gold prospectors in Yogo Gulch accidentally came across a deposit of cornflower blue Sapphires in the 1880s, they believed it was just another deposit of the Alluvial Sapphires found elsewhere in the state. As a result, the precious gemstones were again cast aside.

What they didn’t know was that the deposit they had happened across would later produce some of the most sought Sapphires in the world.

The Sapphires were declared the “the finest precious gemstones ever found in the United States” by Tiffany’s Chief Gemologist, George Kunz.

This caused a sapphire rush in the Yogo Gulch area. From there, Montana’s sapphire mining industry thrived for nearly three decades until heavy flooding destroyed the mines to where they never fully recovered.

Nevertheless, sapphire mining in Montana continued to grow and spread. The valuable gemstones produced in-state are still considered some of the most valuable in the world.

How to Mine for Sapphires in Montana 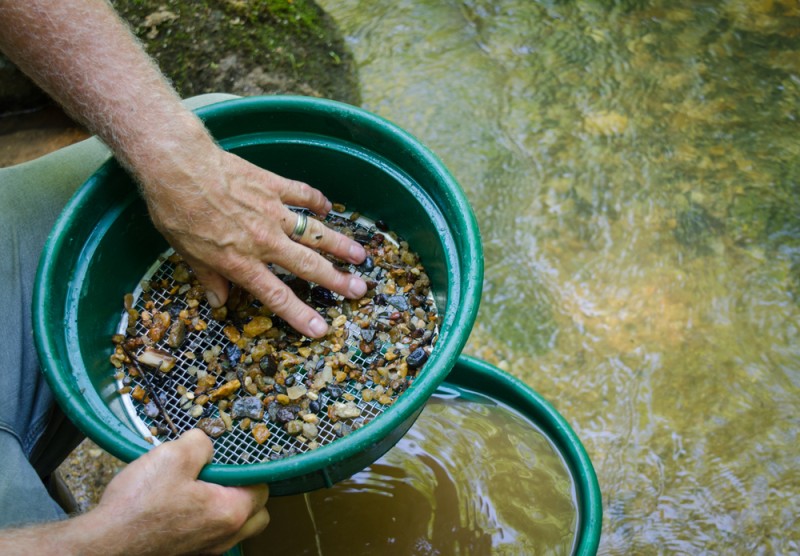 This is primarily due to innovative sapphire mining techniques developed in Thailand in the 1980s, in which the coloration of the gemstone could be improved through processes of heating.

After more than a century after their discovery in the rivers and creeks of the state, Montana’s Alluvial Sapphires were finally considered valuable. Even better is that these sapphire deposits can be found throughout the state and are even available to hobbyist prospectors.

To mine for Sapphires in Montana, amateur rockhounds engage in the same practices as the traditional prospectors of the Montana Gold Rush.

They begin their hunt by first pouring a collection of dirt taken from a river or stream into a square metal tray with a mesh bottom, commonly referred to as a prospecting pan or a sluice.

Prospectors will then swish their trays back and forth through the water while dissolving the dirt in the liquid and out of the tray. The tray will be left filled with only gravel and any possible gems.

To separate the valuable gems from the rest of the stones, sapphire hunters will now begin to shake the tray. Since gems are heavier than the average stone, shaking the pan will cause any potential gems to shift to the center of the tray.

Potential gems can be identified by a light sparkle produced when the stone is mixed with a collection of wet gravel. Prospectors use this knowledge to identify potential gems, which they put aside before beginning the process again.

Amateur prospectors will want to bring any potential Sapphires to a professional gem expert. These gemologists will analyze any possible gemstones and provide them a grade to determine if they are high enough quality to cut.

If the sapphire is determined to be of high quality, it will then go through an industrial heating process in which the gemstone will be heated to between 1650 degrees Celsius and about 2044 degrees Celsius.

The process will dissolve the mineral responsible for the Sapphire’s miscoloration at these temperatures while not damaging the gemstone itself. The by-product of this heating process is a sapphire with improved color and value.

Where to Mine for Sapphires in Montana 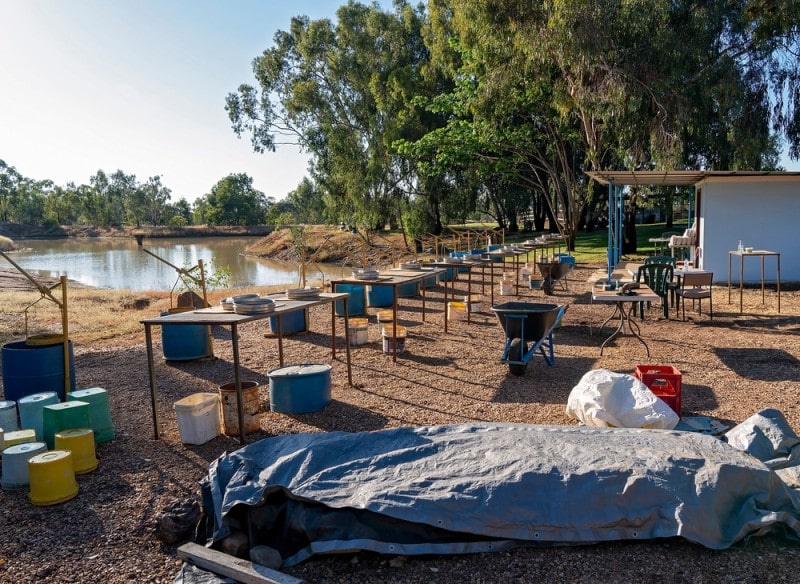 While there are still some mining operations in the Yogo Gulch region, private businesses have long owned the area.

As such, hobbyist prospectors have been unable to get anywhere near the valuable deposit without first having to attain mineral rights.

Luckily, high-quality Sapphires can be found throughout Montana, albeit not quite as valuable as the naturally azure samples of Yogo Gulch.

Some of the state’s most abundant sapphire deposits are the Missouri River near Helena, Rock Creek in the appropriately named Sapphire Mountains, and Dry Cottonwood Creek near Deer Lodge.

Fancy Sapphires can often be found in these idyllic mining locations in various colors ranging from light pinks and purples to orange, greens, and yellows.

Sapphire prospecting can be done anywhere in Montana. But, to maximize their chances of a successful gemstone hunt, visitors to the region should enlist the help of a Sapphire expert.

With over a century of experience, Montana sapphire mines know the best locations to hunt for valuable stone and the best practices for identifying the rock’s potential from the rest of the dirt and gravel flowing through their pans.

Several mines in the state invite guests to their facilities, where they share their expertise and industry insight as visitors partake in the treasure hunt that has enthralled prospectors since the early days of the gold rush.

The Top Sapphire Mines in Montana for Amateur Prospectors

Located directly in the celebrated Gem Mountains, the Gem Mountain Sapphire Mine is one of the best places for visitors to learn the gemstone’s mining history and industrial practices.

Along with receiving direction from prospecting experts, guests to the mines will be brought through the processes of heating and treating the yellow and white gemstones they collect.

The Gem Mountain Sapphire Mine is located halfway between Philipsburg and Hamilton, along the Gem Mountain’s picturesque Highway 38.

The Sapphire Gallery in Philipsburg offers guests the experience of hunting for Sapphires without physically going to a mine.

Operating from the heart of the city, the Sapphire Gallery sells its guests containers of prospecting samples already collected from some of the most abundant deposits in the state.

The gallery’s expert staff walk their patrons through the prospecting process with these samples. Over 12,000 pieces of jewelry have been produced from the fine Sapphires dug up by the gallery’s many visitors.

The Spokane Bar Sapphire Mine in Helena provides its guests with all the tools they need to prospect for the gemstone without actually interfering in the process itself.

Potential prospectors can purchase collections of sapphire gravel either from the Spokane Bar’s physical or online store, with which they can begin their treasure hunt.

The mine also offers a dig option. Visitors will collect their own sapphire gravel samples, and use the mines washboard and screen to prospect for any gems. The mine’s staff will help guests wash and identify any potential gemstones.