Montana is something of a dinosaur enthusiast’s haven, and the state prides itself on the many impressive fossil discoveries unearthed in the region over the decades. There are a total of fourteen Dinosaur Museums in Montana with some amazing displays of artifacts and fossil remains, and the state even has its own Dinosaur Trail.

Looking at some of the Jurassic-style landscapes in Montana, it is not that difficult to believe that some of the best dinosaur fossils have their home in the state, and some of these are recognized as being among the most important discoveries by paleontologists.

Montana visitors and residents alike can step back in time to check out the remains and the reconstructions of some of the biggest monoliths ever to walk the earth. Montana’s Dinosaur Trail takes in the whole gamut of the 14 dinosaur museums, and this provides a pretty broad range of opportunities to find out much more about the prehistoric occupants of the region. Certainly, you will encounter some of the greatest paleontological discoveries from the last century or so along the trail and in the dinosaur Museums in Montana.

So whether you’re a visitor to the Treasure State or a Montana native, you could do much worse than checking out these impressive displays dating back to paleolithic times if you are at all interested in this significant part of the region’s history. So these are some of the top Dinosaur Museums in Montana for dinosaur lovers.

1. Museum of the Rockies, Bozeman 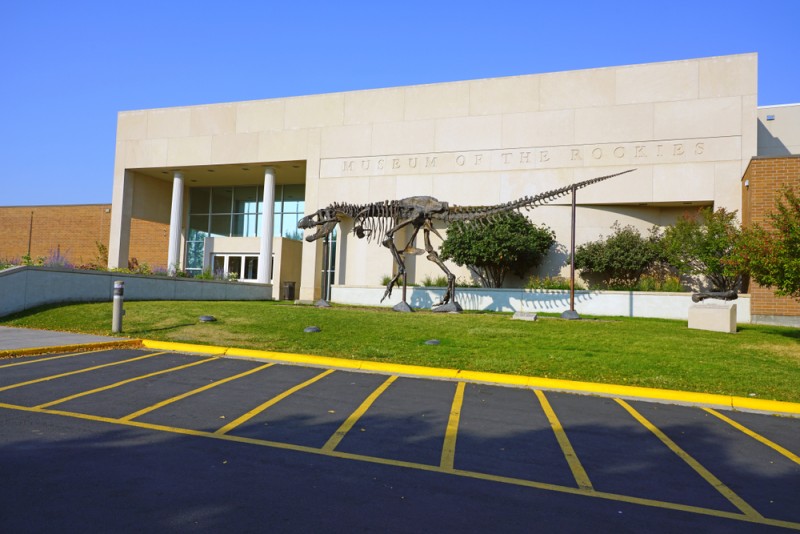 This museum for dinosaurs is probably the best-known in Montana, and not without good reason. Here you will find possibly the most impressive specimen of a T-Rex that you’ll see anywhere. The Museum of the Rockies is actually part of the Montana State University, which is Smithsonian-affiliated and hence the main hub of fossils that are considered state and federal exhibits.

The museum is widely considered to be one of the primary historical institutes across the globe, with a renowned and extensive collection focused somewhat on the large T-Rex specimen. Some of the exhibits in the museum are permanent while others change from time to time, and exhibits are both inside and outside the institute.

You can also find educational programs, lectures, and various events at the museum, which is also accredited by the American Alliance of Museums and forms part of the Montana Dinosaur Trail.

The Great Plains Museum is another participating organization of the Montana Dinosaur Trail, and can be found right in the middle of what is known as ‘dinosaur country’. The museum contains a wide range of Jurassic and Cretaceous fossils like those of the Stegosaurus and the Triceratops among others, as well as some well-preserved specimens of the duck-billed dinosaur the Hadrosaur. The most prized exhibit of this particular institute is one of these duck-bills in something of a mummified state.

The museum also offers various educational programs for children and adults which often incorporate field digs and such, though these are held mainly throughout the summer months.

The Blaine County Museum was established in 1977, and its exhibits feature different aspects of history which include prehistoric. The Paleontology Department has a range of fossils and other exhibits that mainly were discovered in the Judith River Formation.

Here you’ll find Hadrosaur and Gorgosaurus remains from the region, and there are some fairly huge displays of both reptile and invertebrate specimens from millions of years back, including ones from the ocean.

The Two Medicine Dinosaur Center is another of the Montana Dinosaur Museums featured on the Dinosaur Trail, and this place features some of the first baby dinosaurs remains to be found in the region. The center is also home to a broad variety of fossils of the plant, invertebrate, and reptile variety, and also houses various other artifacts discovered in the region.

The museum is very much research and education-oriented and offers public programs that feature practical work and onsite digs, as well as site tours and training courses.

Another participant in the Montana Dinosaur Trail, the exhibits in the Old Trail museum feature artifacts discovered in the region of the Two Medicine Formation.  One of the main exhibits in the Old trail museum is a life-size display of a Maiasura, complete with accompanying Jurassic-style murals courtesy of local artists.

Other prime exhibits include skulls, skeletons, bones, and casts of various prehistoric breeds. The museum also includes a laboratory in which to present and display other types of information about the area and its paleontology heritage. Again there are educational aspects to the museum’s approach which includes allowing people to touch and get the feel of a real dinosaur bone, which is in fact a fossilized thigh bone from a duck-billed dinosaur.

The Carter County Museum is significant in that it was the first one in Montana to put dinosaurs discovered in the region on display. Ekalaka is actually a region of Montana that has featured heavily in the region’s prehistoric-related pursuits and scientific discoveries for over a century or more and continues to do so.

The museum features paleontology displays which include a few rare and valuable examples such as a complete Triceratops skull. There is also an almost complete skeleton of an Anatolian Copei, which is not that easy to come across anywhere. The Ekalaka region has also brought forth remains of various other prehistoric dwellers such as Ankylosaurs, Pterosaurs, and a fairly complete juvenile T-Rex specimen. The majority of the exhibits in the museum are authentic bones and fossils, although there are also various casts and replicas.

This Montana Museum is another one offering various aspects of the region’s history, including prehistoric. Here you will encounter 75-million-year-old preserved dinosaur eggs, possibly belonging to the duck-billed dinosaur variety, and discovered in the Judith River Formation.

This museum also forms part of the Montana Dinosaur Trail and holds various fossils and remains of dinosaurs like the Albertosaurus and the rare Stygimoloch.

The Fort Peck Center originally came into being due to the discoveries in and around the Hell Creek area, most notably the find that remains the museum’s centerpiece. This comes by way of the 75% complete, remains of a T-Rex, which goes by the name of ‘Peck’s Rex’.

The fossil remains of the T-Rex were among the most complete in the world when they were discovered in 1997, and 3 separate versions exist in the center today by way of a life-size cast in the lobby, a fleshed-out model, and actual exhibits.

The Fort Peck Interpretive Center features various other dinosaur exhibits as well, including a Cretaceous-period sea display. The center also features as one of the stop-off points on the Montana Dinosaur Trail.

Frontier Gateway Museum features a variety of historical aspects spanning from the prehistoric t the present. His is an impressive complex comprising seven buildings in total across an acre of Montana landscape. Fossil displays can be found in the main building of this museum, which also happens to be located in the Hell Creek Formation, so well-connected with Cretaceous uncoverings.

Here you will encounter a full-size skeleton cast of one of the area’s major finds of the 1990s by way of a Struthiomimus. You’ll also find other fossils related to the Triceratops, Hadrosaur, and Stegosaurus, along with aquatic and plant-related displays.

Garfield County is another Dinosaur Museum in Montana located in the Hell Creek Formation to the south of Fort Peck Lake. Another center from the Dinosaur Trail, this facility has also made what are considered to be some fairly notable contributions in the world of paleontology.

The first T-Rex in the world to be excavated and identified was actually discovered in the region of Jordan, way back in 1902. Plenty of other impressive fossil remains have also been dug out of the Jordan region including a Triceratops, the inspiration behind the museum’s full-size cast. The museum first opened in 1984 and holds a few impressive exhibits such as a Stygimoloch skull, a T-Rex head, and there are various full-sized dinosaur casts in and around the center.