The open road under a big sky typifies the Montana experience in many ways, and there is no lack of that scenario in the Southwest Montana vicinity of Philipsburg.

The town is located on Highway 1, a stretch of which is designated as the Veterans Memorial Scenic Highway. The highway runs between Anaconda and Drummond, it is also a scenic route that can make lighter work of traveling between Butte and Missoula.

The Anaconda-Pintler Scenic Drive is amazingly picturesque, and also makes for a great alternative route from the I-90 on any outing in the region.

It can certainly make much lighter work of traveling between Yellowstone and Glacier National Park. In terms of mileage, the distance is almost the same although it will take about an hour long, but the views are worth it.

A Guide to the Anaconda-Pintler Scenic Drive

The Anaconda-Pintler Scenic Drive is in fact the only way to reach Philipsburg, and it remains one of the main reasons why the majority of visitors head into the area. 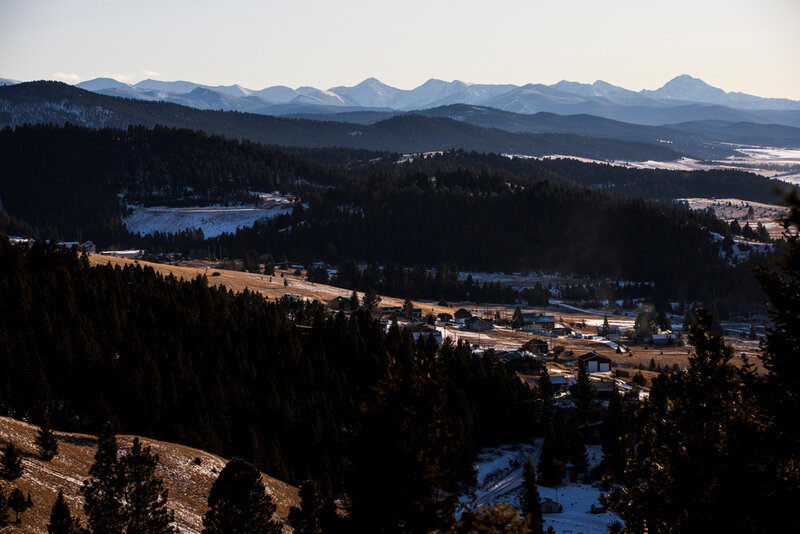 Starting Out and the Main Attractions 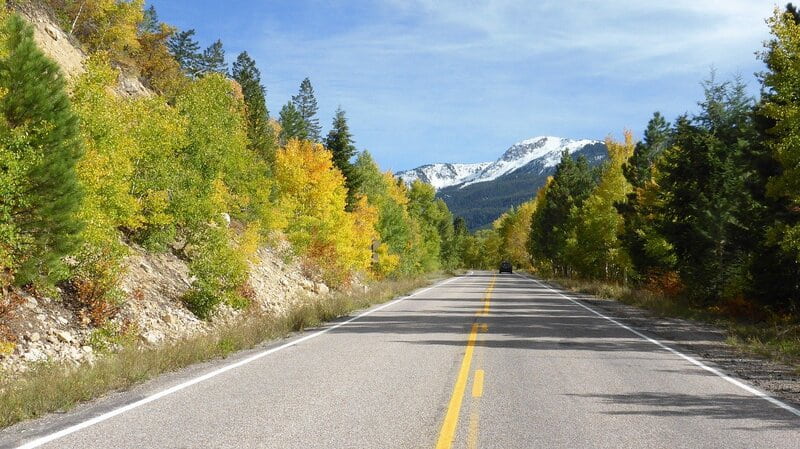 From an eastern starting point, the scenic route follows Highway 1 in the direction of the mining town of Anaconda. Visitors who don’t know the area might start to feel discouraged at this point—especially when driving the nine miles between the Interstate Highway and Anaconda.

In simple terms, this stretch of the route passes through the largest Superfund site in the entire U.S., complete with barren gravel flats and the disused landmark Anaconda Smokestack.

The views may seem uninspiring to say the least, although the snow-covered peaks of the mountains beyond are an indicator of what lies ahead, and the landscape seems to change dramatically once through Anaconda.

The Anaconda-Pintler Scenic Route climbs steadily, to the west of the region, and forested mountains start to permeate the scenery.

Recreation and adventure abound at the lake, which can be reached along the Pintler Scenic Byway from Philipsburg in just a 15-mile drive.

The lake encompasses over 3,000 acres and is backed up by the Anaconda Pintler Mountains. Needless to say, it is a major point of attraction for day use or weekend outings. There are also several campgrounds and day-use areas surrounding the highway closest to the lake

Recreational Activities along the Drive

The town of Phillipsburg is approximately 26 miles south of Drummond, where the northern terminus of the highway is located. It continues all the way to Anaconda and passes multitudes of recreation opportunities that include ski areas, trailheads, and boat launches—many within the Beaverhead-Deerlodge National Forest.

Anaconda is located right at the end of the Pintler Veteran’s Memorial Scenic Highway, and the scenic route links the town to nearby Philipsburg and the various recreation opportunities that exist within the national forest.

The area is a haven for wildlife and birds such as bald eagles, deer, elk, big horn sheep and more. Philipsburg is a great place from which to explore the outdoors, browse a few charming shops, and even mine your own sapphires.

After passing Philipsburg, the drive continues north, closely following Flint Creek. The creek is known for its decent trout fishing, but access is not that easy—thus wade fishing is the norm.

Flint Creek begins at Georgetown Lake and flows through the center of this scenic valley to its confluence with the Clark Fork. The river runs mainly through areas with private property, although there are a few scattered access sites where roads cross the stream.

The creek winds through the valley along the highway, and fly fishermen in the blue-ribbon streams become more apparent to anyone on the drive.

Most anglers are pitching for brown trout, which can average around twelve inches in length. Some rainbows and cutthroats can also be found on the upper end of the creek near Georgetown Lake.

Some of the best water along Flint Creek is found well away from the few bridges with access points. The adventurous angler might gradually work their way through the water or hike further up or downstream for some more rewarding action.

Aside from around the access point areas, there is actually little fishing pressure along the creek.

Georgetown Lake is where the headwaters of Flint Creek originate, and the lake provides excellent rainbow and brown trout fishing.

The lake is set in a serene spot north of the Anaconda-Pintler Wilderness and makes for some scenic fishing. At over 3000 acres, this reservoir is fertile and generously stocked—and with strict take-home limits, the lake produces some huge fish.

Georgetown Lake does receive some fairly heavy fishing pressure, as well as boating activity. The lake possesses the kind of picturesque and serene natural beauty that attracts lots of tourists as well as locals—especially during summer weekends.

Unlike the river, Georgetown Lake has very easy access as Highway 1 follows the lake on one side. On the other side exists a network of dirt roads that follows the lake.

The majority of the lake is located within national forest land, which means anglers can fish from the shore in a variety of locations, and a few boat ramps are also available allowing for easy access.

The large brook trout that are found in Georgetown Lake is most prominent throughout the fall, although the rainbow trout can be caught all throughout the summer, particularly during July and August.

Powerboats are allowed on the lake, although inflatable boats with solid paddling skills work well depending on the wind, which can sometimes be on the strong side. That said, Georgetown Lake doesn’t suffer from the constant cross-winds that other nearby reservoirs in the valleys seem to get.

Trail Routes near the Scenic Drive 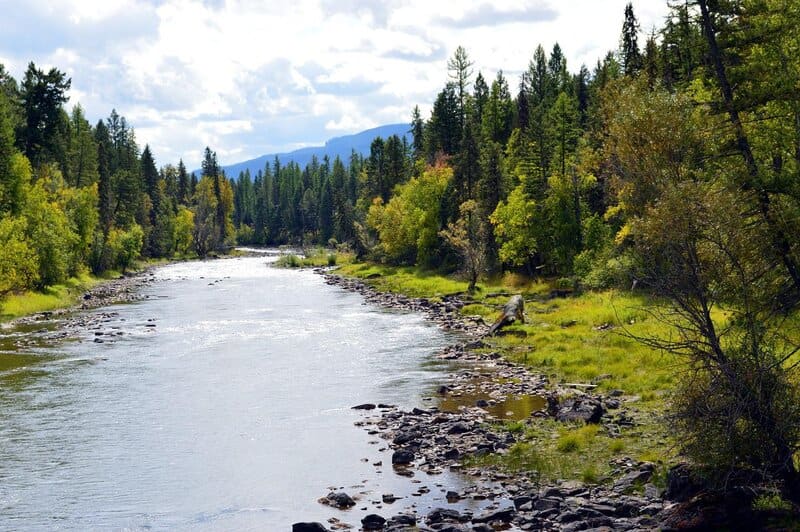 This route is a 9-mile, out-and-back trail near Anaconda. Reportedly the trail is moderately challenging and takes on average over 4 hours to complete. The trail is used for birding and other wildlife viewings as well, although the likelihood of encountering others is still fairly low.

The best times to use the trail are sometime between May through September. The trail has a reasonably easy gradient and is well-marked and maintained.

The lakes along this route are surrounded by mountains which add to the overall scenery magnificently. Some hikers may choose to turn back at the 3-mile stage if they don’t intend on completing the entire hike.

The Upper Seymour Lake route can be either a 13-mile out-and-back hike, or it can be included as part of a much longer route that leads along the Continental Divide Trail.

The lake trailhead begins just above the Lower Seymour Lake Campground in the Beaverhead National Forest. The spacious parking lot has a pit toilet, and the trail is used by horses and dogs as well as hikers. After about one mile the route breaches the boundaries of the Anaconda Pintler Wilderness Area.

The trail is well-maintained and marked, mostly running through Lodgepole Pine forests, with various brooks and springs along the way. The trail is relatively easy for the first 4 or 5 miles and then it starts climbing the lake’s plateau.

Camping opportunities exist at the lake, and the trail is a great one if you like hiking with your dogs. The lake is incredibly picturesque as you might imagine and is also a great fishing spot.

The Big Pintler Loop Trail is a 3.7-mile, moderately-challenging loop trail that takes you through a nice forested area near the Wise River. It takes most hikers on average 1.5 hours to complete and is generally reported to be moderately challenging.

This is a popular trail for birding and wildlife viewing like most of the routes in the region, and it will definitely provide some solitude at certain times of the day. The best times to use the trail are May through September.

The Pintler Creek Trail is a 7.1-mile route of moderate difficulty beginning at the end of Pintler Creek Road and ending up at the junction with the Continental Divide Trail. The large gravel parking area has an unloading ramp and a toilet at the trailhead, north of which lies the Anaconda-Pintler Wilderness Boundary.

Oreamnos Lake features along the route, and loop hikes are possible by intersecting with both the Mud Ridge Trail and the Beaver Creek Trail Pintler Creek Trail is well-maintained with a gentle and steadily-climbing grade. Motorized vehicles or mountain bikes are not permitted in the wilderness area, where snow may still be apparent as late as June.

The Pintler Creek Trail heads off into lodgepole pine forest where walkers often spot moose. After a mile, the trail approaches Pintler Meadows, which is a scenic yet marshy flood plain for the creek which follows the meadow for a mile or so. The trail can seem steep for most of its length from here until it connects to the Continental Divide Trail near Elk Park.

The Pintler Creek Trail continues climbing at a relatively easy grade toward Oreamnos Lake and the junction with the Continental Divide Trail surrounded by the lush pine forest and spruce.

There are some nice campsites along the trail in some of the small meadows, particularly at the Pintler Creek Trail junction with the Continental Divide Trail.