The Grand Loop Road connects the main highlights of Yellowstone National Park, making it one of the best ways to explore.

Curving in a figure eight, the road features the Lower Loop section and the Upper Loop section, both picturesque drives that pass an abundance of scenic natural sites.

History of the Grand Loop Road 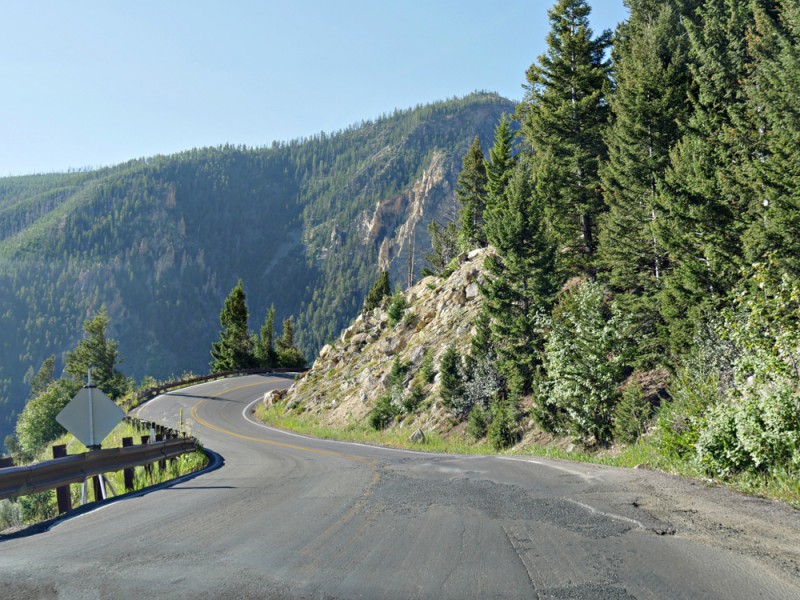 The Grand Loop Road was first constructed in 1915, but it wasn’t completed with paving until the 1940s. The majority of the road was planned by Captain Hiram M. Chittenden of the US Army Corps of Engineers, as Yellowstone National Park was under military administration at the time.

According to Yellowstone Net, the Grand Loop Road was named in 1923 by the park’s publicist Harry W. Frantz, who worked for Yellowstone. In 1926, it became one of the first roads to be oiled in Wyoming, as the oiled surface was easier for visitors to drive upon than dirt or gravel.

The most major junctions of the road are located at Mammoth Hot Springs, Madison, the West Thumb Geyser Basin, and the Roosevelt Lodge Historic District. 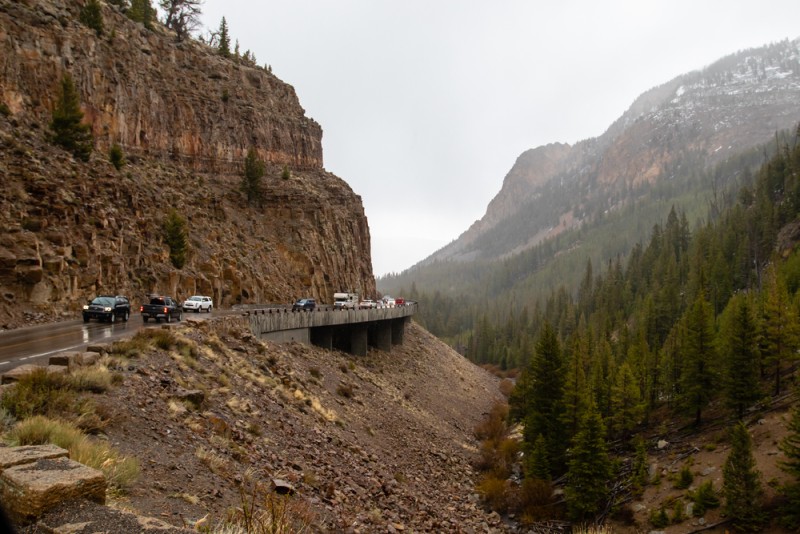 Running for 140 miles (230 kilometers), the Grand Loop Road passes through several of the most stunning locations in Yellowstone National Park and serves as the main route between the park’s main attractions.

Things to see and do along the route

The Grand Loop Road is the primary way to see the main attractions of Yellowstone National Park. There are endless things to see and do along the route, including: 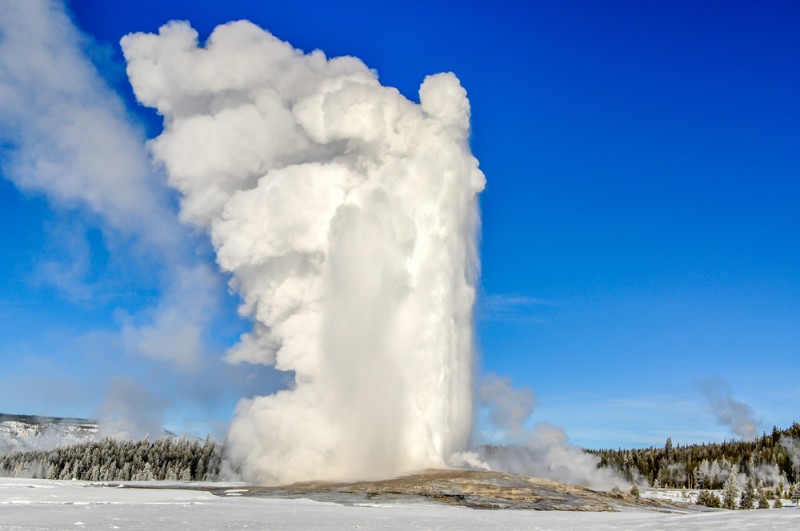 Along with the famous geyser and its boardwalks, you’ll discover restaurants, hotels, and a visitor center.

Located in the Midway Geyser Basin, Grand Prismatic Spring is one of the most photographed and iconic sites in Yellowstone.

The spring features mesmerizing shades of orange, yellow, and blue, and is famous for being the largest hot spring in the country.

The Firehole River runs parallel with the Grand Loop Road for the first half of the stretch between Madison Junction and the exit for the Old Faithful Area.

You’ll be able to watch anglers fish in the river, as it’s one of the best fishing spots in the area.

Firehole Canyon Drive is a one-way side road that runs off the Grand Loop Road, and this will take you past the Firehole River Falls and swimming area.

Because there is limited parking and Firehole Canyon Drive is so narrow, large vehicles and RVs are restricted.

On the stretch of road between Madison to the Norris Geyser Basin, you will find Gibbon Falls.

The scenic falls are located on the side of the road just under 5 miles (7.6 kilometers) upstream from the confluence of the Gibbon and Firehole Rivers.

This trail takes hikers past one of the most active areas in the Lower Geyser Basin known as the Fountain Paint Pots. According to the National Park Service, hydrogen sulfide gas usually gives the geothermal mud pots their bubbling nature and particular odor.

Other points of interest along the Grand Loop Road include White Dome Geyser and Firehole Lake, both of which can be accessed via the one-way side road known as Firehole Lake Drive.

The road is under frequent repair due to its proximity to geothermal activity, so check ahead to ensure it’s open.

One of the smaller thermal areas in Yellowstone, Monument Geyser Basin is a hidden gem nestled at the south edge of Gibbon Meadows.

Here, you’ll discover a group of tall and narrow geyser cones, the largest of which is Monument Geyser. You can reach the basin via a steep trail that extends one mile from the road. 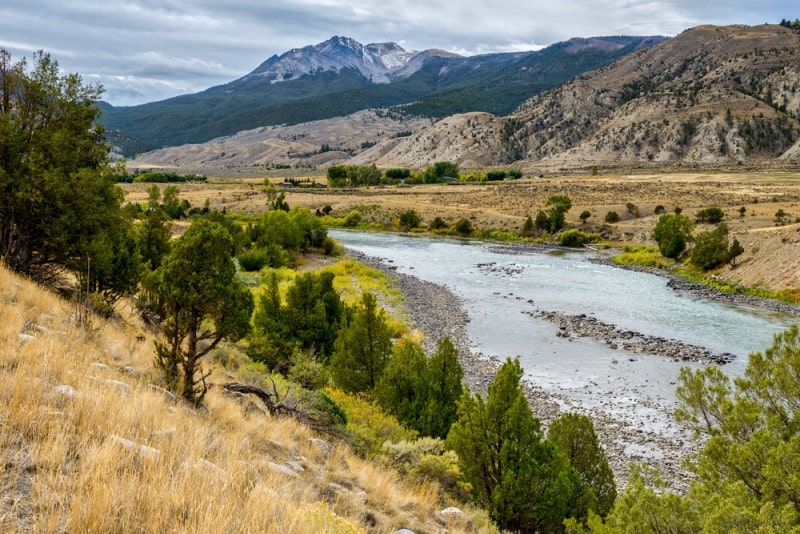 The Yellowstone River originates in the Absaroka Range of Wyoming before flowing through the national park, feeding Yellowstone Lake, and dropping into the Grand Canyon of the Yellowstone.

It’s the last major undammed river in the country and features both tranquil stretches and rapids.

Located on the eastern side of the park, the Mud Volcano geyser area is home to muddy hot springs and fumaroles.

Sites within, like the Sulphur Cauldron, are exciting to witness from viewing points, but you’ll be grateful that access is denied: the Cauldron has the pH level of battery acid. 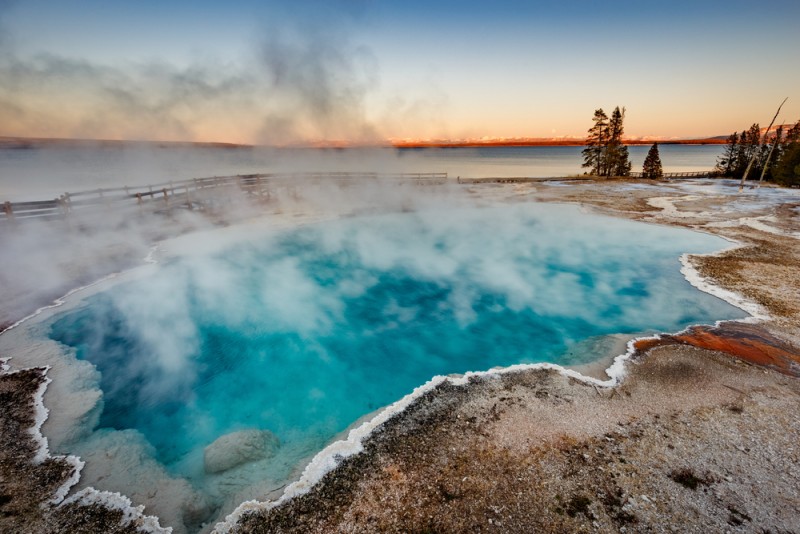 The West Thumb Geyser Basin is the largest geyser basin by Yellowstone Lake and features points of interest such as the hot spring known as Fishing Cone and another hot spring called Abyss Pool.

Despite its name, the Fishing Cone is not a place for fishing as the geyser has been known to erupt without warning. 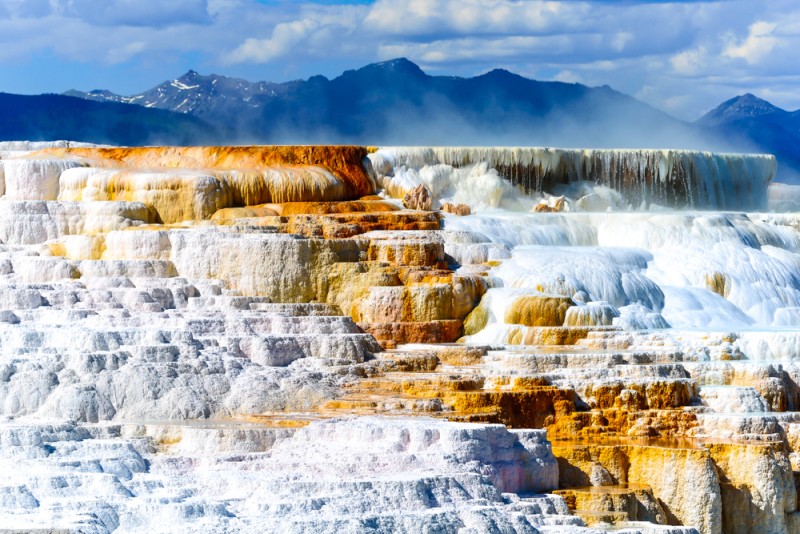 One of Yellowstone’s most iconic landmarks, Mammoth Hot Springs is a network of hot springs just south of the park’s North Entrance.

Visitors can view the famous hot springs from the terraces—boardwalks that take park guests above the scalding geothermal features. 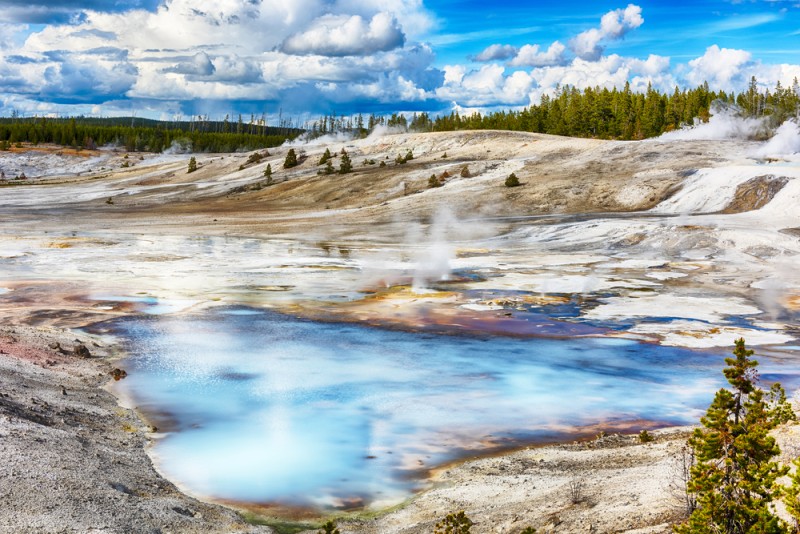 Yellowstone National Park has several geyser areas, but the Norris Geyser Basin is the oldest and hottest of them all.

The area has been home to thermal features for at least 115,000 years and is home to the tallest geyser in the world, Steamboat Geyser, which erupts at 300-400 feet.

One of Yellowstone National Park’s most fascinating features is the presence of petrified trees. The trees were petrified when the Absaroka volcanoes were active, around 50 million years ago.

Yellowstone Forever explains that the petrification process actually preserved the cells of the wood within the minerals.

The Blacktail Plateau Drive is another scenic drive running off the Grand Loop Road. A narrow dirt road, the drive takes visitors to the backcountry meadows and woods of the Blacktail Deer Plateau. Along the way, you’ll often spot elk, bison, and bears. 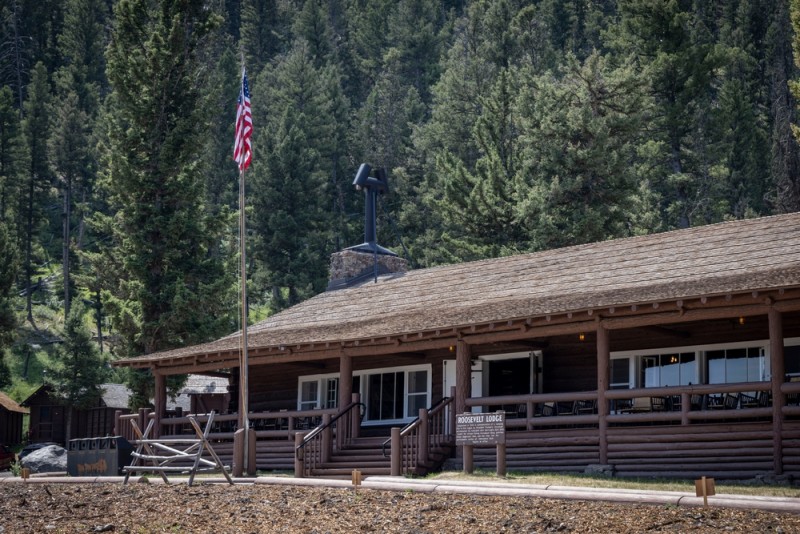 The Roosevelt Lodge Historic District is a must-visit for anyone interested in learning about Yellowstone’s history.

There are 130 buildings in the district, including rustic and authentic accommodation for those who want to base themselves in the park.

Despite the rustic nature of the lodging, there are a few modern amenities, including a bar, a gift shop, and vending machines. 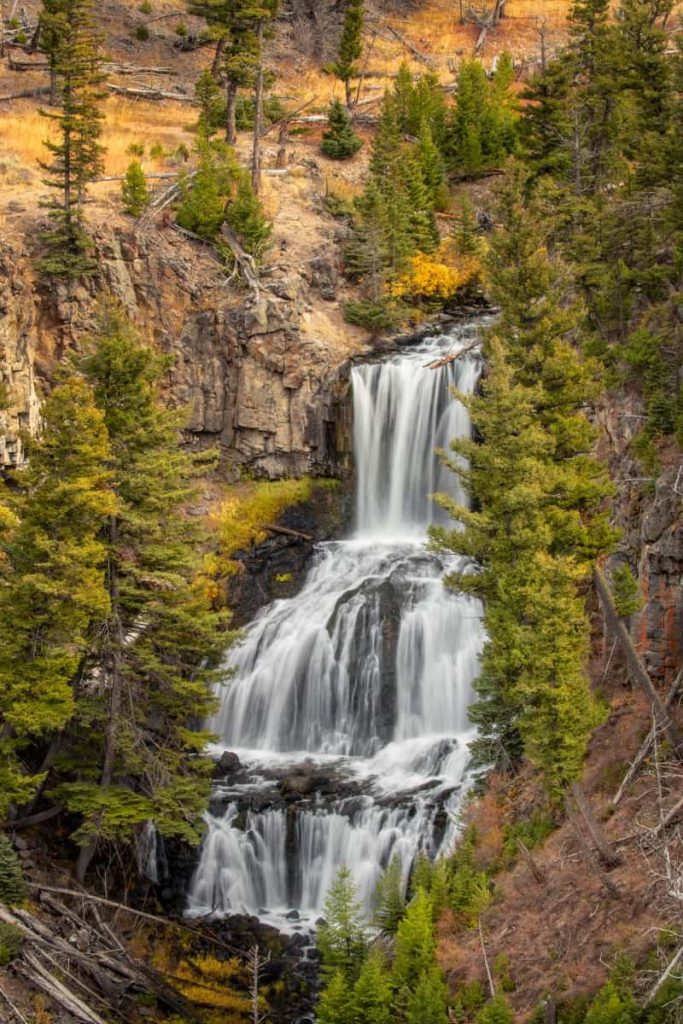 Yellowstone National Park has no shortage of spectacular waterfalls. Undine Falls is located just east of Mammoth Hot Springs and is visible from the side of the road.

The falls feature a three-tiered plunge that drops 60 feet from Lava Creek and even appeared on the cover of National Geographic in 1977. 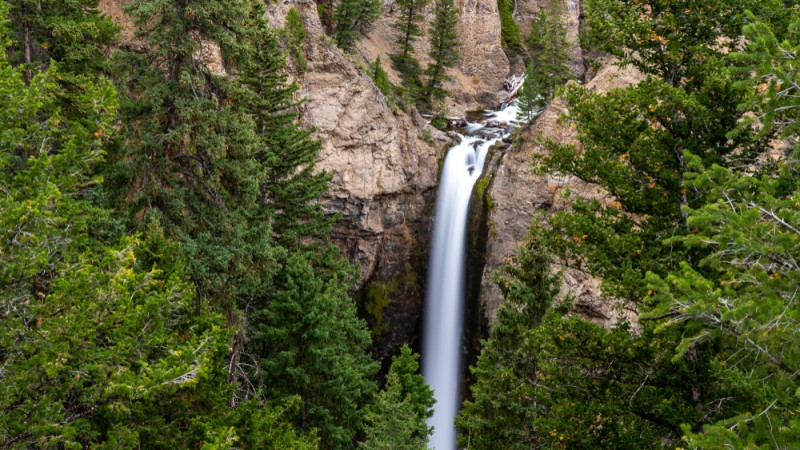 Tower Fall lies in the northeast section of the park, a short distance from Tower Junction. This is one of the most popular of the park’s waterfalls due to its ease of access.

The viewpoint is around 100 yards from the parking area and visitors can also walk past the overlook for three-quarters of a mile for a vista of Tower Creek flowing into the Yellowstone River.

How long does it take to drive the road?

The total time it takes to travel the Grand Loop Road varies, but usually sits somewhere between four and seven hours. Expect longer times during the popular summer months, when traffic is busier. Often during June and July, the traffic is bumper to bumper.

Luckily, the scenery surrounding the road is stunning, and in many cases, you’ll want to inch by slowly anyway so you can completely absorb it. The best approach is to allow a whole day on the road and enjoy seeing the sights slowly to avoid frustration.

When is the road open?

The Grand Loop Road itself is open throughout the year, but some stretches of the road close in winter. This is because the road crosses a number of high mountain passes with heavy snowfall, including Craig Pass, Kingman Pass, and Dunraven Pass.

When is the best time to drive the Grand Loop Road?

The best time to drive the Grand Loop Road is generally considered to be spring and fall, as these seasons are less popular than summer and don’t usually feature the road closures of winter.

Is it safe to drive?

Overall, the Grand Loop Road is safe to drive provided that you stick to the average speed limit of 45 mph.

Note that many stretches of the road feature sharp twists and turns, so it’s important to take extra care in these parts. Cutting corners recklessly can seem like a time-saver, but will greatly increase your chances of an accident on the windy road.

Given the popularity of the Grand Loop Road, it’s also often busy with traffic, increasing the need to exercise caution while driving. Be on the lookout for the unexpected, including broken-down vehicles and wandering animals.

Do wildlife travel on the road?

In an ideal world, the Grand Loop Road itself would be free of roving wildlife. But sometimes, bison, bears, and other creatures that reside in the park do make their way onto the road and disrupt traffic.

This is another reason why it’s important to pay careful attention while driving and always be prepared to stop. The animals on the road also tend to cause long delays, as even wildlife sightings near the road bring traffic to a stop.

What stretch of the road is the most popular?

The entirety of Grand Loop Road is popular with park guests, but the most popular section is the stretch between Madison Junction to the exit for the Old Faithful Area. This section of road takes visitors through most geyser basins.

Is the Upper Loop or the Lower Loop better?

Both the Upper Loop and the Lower Loop will take you to points of interest worth seeing. If you only have time to drive one loop of the road, it helps to know what attractions each one passes.

Traveling the Lower Loop, you will find highlights such as:

By contrast, the Upper Loop will bring you to:

The Grand Loop Road is the main network between the many wonderful attractions in Yellowstone National Park.

Whether you’re driving the whole loop or just stretches, it’s a great way to reach the park’s landmarks and witness exquisite views along the way.