Colter Falls is an inundated waterfall located within the Rainbow Dam impoundment in Cascade County.

First discovered by the Lewis & Cark Expedition in 1805, Colter Falls was the smallest of the five waterfalls that would later become known as the Great Falls.

Within his notes, Meriweather Lewis observed the waterfalls were approximately 14 feet wide with a drop-off of roughly 6 feet.

However, with four other larger, more enticing waterfalls in the region, the expedition didn’t spend much time observing the small landmark, and the falls remained unnamed for over half a century.

It wasn’t until the 1880s that Paris Gibson, the founder of the nearby city of Great Falls, named the water feature Colter Falls in honor of John Colter, a lesser-known member of Clark’s survey team.

Colter Falls served as a landmark of the nearby community for approximately 30 years before the Rainbow Dam was completed in 1910, completely submerging the cascade underwater, where it remains today.

Despite being hidden under the artificially created body of water, the historical monument is still considered one of the five waterfalls that make up Great Falls and offers plenty of fun hiking and fishing opportunities within its waters and the surrounding region.

While the Colter Falls may not be observable today, the four remaining waterfalls that make up the Big Falls are still beautiful landmarks easily accessible along the River’s Edge Trail.

Following the Missouri River for about 60 miles on either side, the trail spans the distance from Black Eagle Falls in the South to Big Falls in the North and passes by Rainbow Falls and Crooked Falls along the way.

Visitors should stop at the impoundment site of Rainbow Falls to appreciate the historic site of Colter Falls, which is now buried beneath the body of water.

Visitors may not be able to see the falls, but that doesn’t mean they can’t still fish the same waters first observed by the Lewis & Clark Expedition.

At the base of Colter Falls, the expedition first described the species of fish that would later become known as the Westslope Cutthroat Trout. Although they did not name the species, the Cutthroat Trout would become the Montana State Fish almost 200 years later in 1977.

Located within Giant Springs State Park, one of the best sites to cast your line is from the comforts of the preserve’s fishing pond.

Along with the native Cutthroat Trout species, anglers can also expect to catch Rainbow Trout while enjoying the preserved riverside. 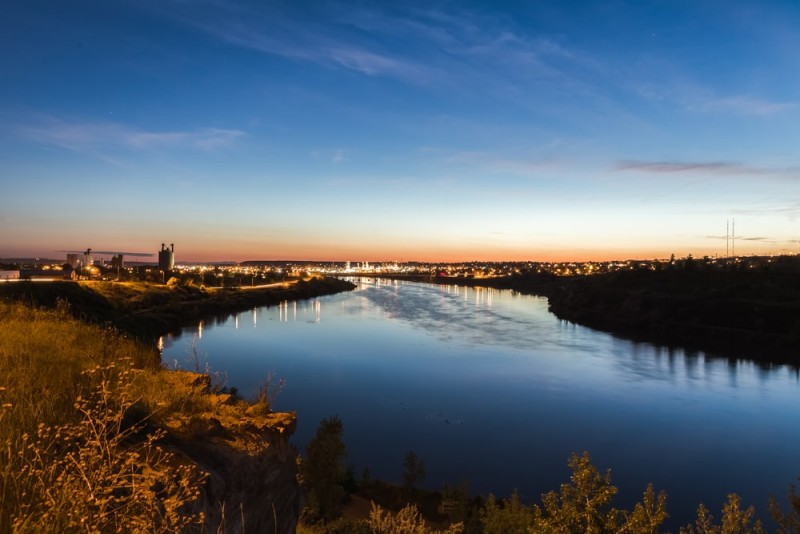 The combined paved and single-track trails encompass the perimeter of the Missouri River around Great Falls, spanning the distance from Black Eagle Falls in the South to Big Falls in the North.

The 60-mile trail explores the diverse topography of the countryside, from awe-inspiring views of surrounding mountains with their river canyons to long-spanning prairie fields.

Hikers to the region should start their journey along the Missouri River’s Edge Trail in Gibson Park, located in the city’s downtown region.

Starting next to Black Eagle Falls, hikers will follow the path along the river until they reach Rainbow Falls, about 5.4 miles upstream.

From there, hikers will follow the South Shore Trail Head. Walking towards the east, hikers will cross the river before arriving at Ryan Dam at Big Falls.

The trail continues to the North to Morony Dam, where hikers will turn around and follow the path along the river’s northern shore.

In total, the trail is 60 miles. And while the path is well-maintained and easily traversable, it would still take multiple days to complete. Luckily, located near the city, hikers can easily access several hotels and accommodations to spend the night.