Montana’s Giant Springs State Park is located in the west-central region of Great Falls in Cascade County. The picturesque natural area in which the state park is situated was discovered in 1805 by pioneering explorers Lewis and Clark and is one of the largest freshwater springs in the entire country.

The state park itself was established in the 1970s and has turned out to be the most-visited of all Montana’s state parks. It’s not hard to see why once you begin to get an idea of the landscape and views.

The park’s natural features are impressive, to say the least, and a broad variety of bird species and other wildlife permeate the scenery.

The park hosts regular special events and has a visitor center, not to mention the fact that just along the road you can drop in at the Lewis and Clark Interpretive Center.

The springs are the obvious focal point of the state park, but 4,500-odd acres of land provides unlimited opportunities for various other activities like walking, hiking, or picnicking along the Missouri River. You can walk along the scenic Rivers Edge Trail, check out the nearby Rainbow Falls overlook, or do a spot of cycling.

The park contains over 20 miles of single-track trails for walking or cycling as well as a few more formal-looking paved trails for taking in the natural and beautiful surroundings.

Not surprisingly, the park is a favorite of budding photographers, bird-watchers and other wildlife enthusiasts, and anglers.

Water is a prominent theme within the park, which also contains Giant Springs State Fish Hatchery – the only hatchery to feature in any Montana State Park.

The hatchery actually utilizes water from the springs, and you can drop in and get a few insights about raising fish.

If you would rather be catching fish than raising them, there are a few decent spots for fishing in the park, including the Roe River.

There is more water to check out in the form of the Great Falls of the Missouri one of 4 waterfall sites in the park as well as 5 hydroelectric dams.

You can see all the park’s waterfalls and some of the dams from the overlooks, where you will find information kiosks and vault toilets.

You can also get to the trails from these points, as well as access multiple bridges across the crystal clear water of Giant Springs. The only thing you won’t find in this popular state park is camping – the park is day-use only between 8 am and 6 pm. 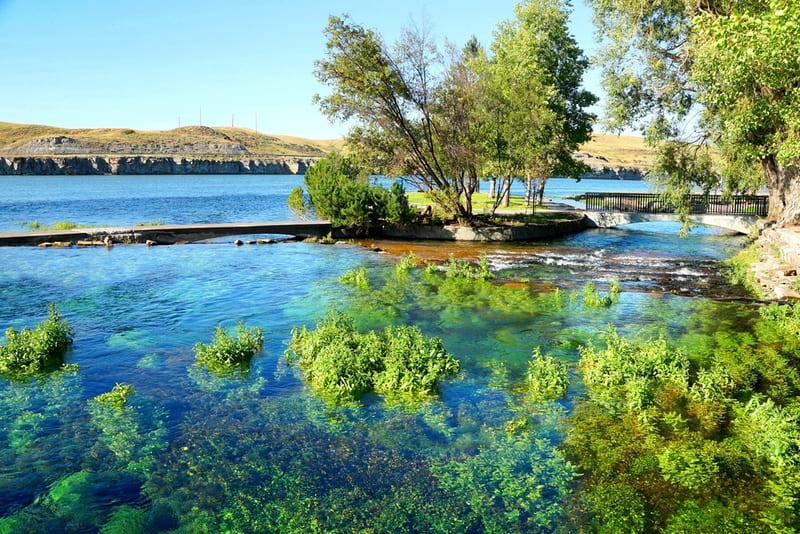 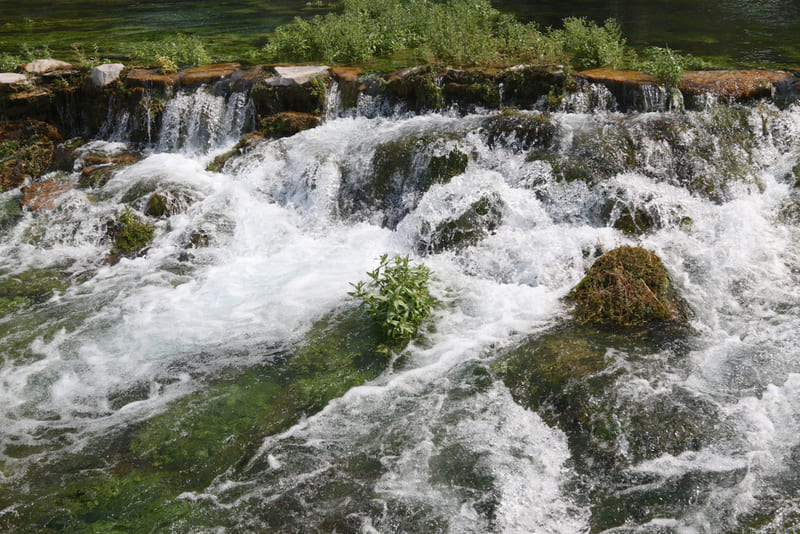 The kiosks near the overlooks contain further information, but if you want to get your bearings for the park properly you might check out the visitor center. This is where you will find the majority of events, exhibitions, and other information related to the park.

And let’s not overlook the fact that the park is named Giant Springs because of the Madison Aquifer, one of the largest freshwater springs in the country.

The spring channels more than 150 million gallons of clear water every day, and this water originates in the Little Belt Mountains more than some 60 miles from the park.

The water is also unique in that the temperature somehow manages to remain constant at 54 degrees regardless of the season.

Within walking distance and adjacent to Giant Springs is another informative educational facility related to the area.

The Lewis and Clark Interpretive Center is 25,000 square feet of permanent exhibits related to the region. There is also a theater, a classroom, and a shop.

The center also has its own trail system, with some of the trails leading off to the Missouri River and including some impressive views of the local environment.

The center is open Mon-Sun between 9:00 am and 6:00 pm in summer, with slightly more limited hours between 9.00 am and 5.00 pm in winter between Tuesday and Saturday. Entrance fees are around $8.00 with no fees for children under 15.

There is certainly plenty of outdoor activities to experience at this State Park. Hunting is permitted in various sections of the land under a conservation easement of the park’s energy provider, Northwestern Energy.

Many hunters come to the region looking for deer, game birds, and waterfowl. If you are looking for something slightly tamer the fishing is excellent along the Missouri River stretch as well as in a separate pond in the park and Roe River.

Roe Island is where to find reportedly the best fishing within the state park. This area of the park is surrounded by springs that run into Missouri on one side and down into the Roe River – one of the shortest rivers in the world on the other.

If river fishing is not so much your thing the Family Fishing Pond in the park is also great for fishing and has 5 easily-accessible docks.

You can get to the pond from the fish hatchery or the trail from the Lewis & Clark Interpretive Center. The pond contains various trout varieties such as Westslope Cutthroat Trout and Rainbow Trout.

The trails in the state park all form part of a much greater system by way of the 60-mile long River’s Edge Trail System that permeates the Great Falls region.

The Giant Springs State Park Loop is a short, 1.4-mile loop trail with fairly light traffic. It takes you in the vicinity of the river and is easy enough for all levels. The trail is used mainly for hiking and walking, as well as those visiting the park on nature trips.

The trail is best between March and October, and the surface is a mixture of natural and paved asphalt areas, mostly about 3-feet wide. The gradient is fairly mild with a few steeper sections but the trail is not challenging for the majority of hikers. It can be accessed via any of the 2 designated spaces in the parking lot off of Giant Springs Road at the south end of the trail.

The River’s Edge Trail to Rainbow Dam Overlook is the most accessible stretch of the trail system. This is a 4.5-mile out and back trail with light traffic, again featuring the river and suited to all skill levels. The trail provides access to other activities and is best between April and October.

This section of the Rivers Edge Trail is just under 2 miles long and is an out and back trail with moderate traffic. Again the river features along the trail, which is around 8-feet wide and is used for multiple purposes. It has a smooth, paved asphalt and concrete surface for the most part, and the best time to use this route is between March and October.

You can access the trail via 4 designated accessible spaces in the Giant Springs Road parking lot at the northeast end of the trail.