The Ponderosa Pine (Pinus Ponderosa) has served as the Montana State tree since it was officially recognized as a state symbol in 1949.

Although it has only served as the official state tree of Montana for a little over 70 years, the Ponderosa Pine was actually chosen forty years before its official recognition and was selected by schoolchildren in 1908.

The Ponderosa Pine was selected over other local Montana Trees such as the Douglas fir, American larch, and Cottonwood.

Capable of living hundreds of years, the tree was chosen because of its large “ponderous” size, its uniquely colored bark, and its long-standing significance to the history and the culture of the state.

The Ponderosa Pine is easily distinguishable by its “ponderous” size, from which description the tree derives its name.

Generally, the Pinus Ponderosa reaches adult heights of about 130 feet. However, the largest tree of the species in the state is currently towering at 230 feet.

Adult Ponderosas are further recognizable by their long, straight trunks, shielded by yellow-orange bark, and capped off with a collection of foliage at the tree’s top.

Young Ponderosas share similar anatomy, except that they also feature branches reaching out from the trunk.  These branches fall off as the tree matures.

The Montana State Tree features needle foliage that ranges from 3 to 5 inches long and develops in groups of 2 or 3. Described as about the size of a baseball, these needles are identifiable by the sharp points at the end of their cone scale.

Where to Find the Ponderosa Pine in Montana 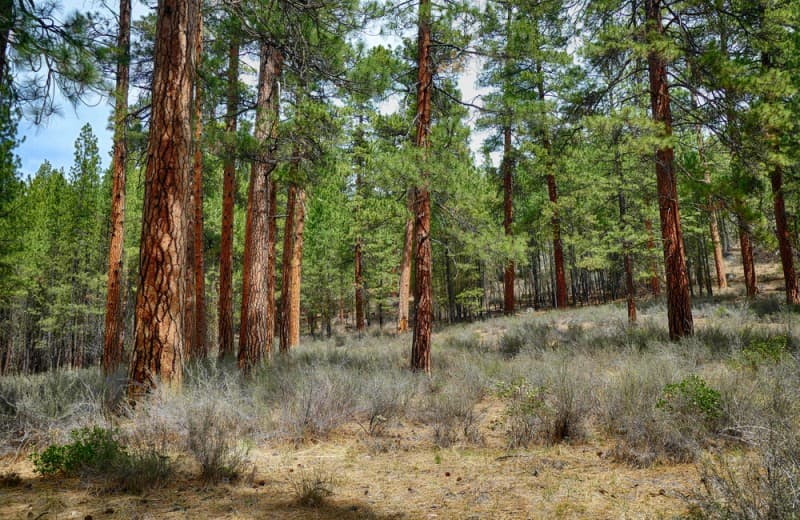 Widespread across the Western United States, the Ponderosa Pines are typically found on sloped and flat areas with a partially arid climate. The tree itself requires a lot of sunlight and often grows in forests with plenty of space between trees.

The Ponderosa Pine can be found all over Montana and occur in two distinct forest Ranges. The first range is the Great Plains Ponderosa Pine Woodland and Savanna. It reaches from Southeastern Montana to cover most of central Montana.

The second forest range where the Ponderosa Pine can be found in the Rocky Mountain Ponderosa Pine Woodland and Savanna. It covers nearly all of central Montana and most of Northwestern Montana.

Perhaps the best spot to admire the Montana State Tree is where these two forest groups meet, in the region of the state known as the Rocky Mountain Foothill Woodland-Steppe Transition.

Here visitors can spot an intermingling of two distinct Ponderosa Pine subspecies and will quickly appreciate why this towering tree was chosen as the official State Tree of Montana.