To put it simply, Fort Owen State Park is home to a whole lot of firsts for the state of Montana. While the land of Stevensville, Montana was originally home to the Salish tribes, this specific historic site showcases the grounds of the first permanent white European settlement in all of Montana.

Surrounded by the gorgeous Bitterroot and Sapphire Mountains on the southwestern side of the Treasure State, it was home to Montana’s first Catholic church in 1841, as well as the first sawmill, agricultural development, and school. In 1850, it grew even further with the arrival of Major John Owen.

Today, it’s a testament to the power of resilience and community, as well as a home for period furnishings and extraordinary artifacts.

But let’s get back to the basics for a moment.

But of course, pioneers and prowess were inevitable, starting with fur traders and Lewis and Clark in 1805.

If you’re a history buff, you already know that Lewis and Clark’s Expedition had plenty of ups and downs – awe and wonder, but also extreme exhaustion and fatigue.

As they reached the Salish area of the Bitterroot Valley, the typically guarded Salish shared food, drink, and gifts of ceremony after realizing Lewis and Clark meant no harm.

This created an openness in the Salish tribe that would continue to impact them as the land at Fort Owen State Park became more vital. A bridge between communities had been established.

After a time, the Salish tribe requested Jesuit missionaries, or Blackrobes, to come into their community, and that’s when St. Mary’s Mission was established in 1841 by Father Pierre DeSmet.

So where does Fort Owen come in?

Major John Owen arrived in the area with his Shoshone wife, Nancy, in 1850, intending to establish posts along the treacherous Oregon Trail to protect its travelers.

Due to mounting tensions between indigeneous tribes, the Jesuits were preparing to leave as the Owen family moved in. John took over their developing land and property, continuing to support irrigation and water rights in the area.

Soon, Fort Owen became a cultural center, as well as a trading post of sorts. Owen sold supplies to traders, indigeneous peoples, surveyors, and more, rebuilding a community from its ashes.

Once tensions had calmed down, the Jesuits returned to the area in 1866, now teeming with activity. Led by Father Joseph Giorda, the religious group re-established its community, picking up where it left off.

Likewise, numerous Salish welcomed back their Blackrobes, assisting in the building process. The missionaries conveyed their gratitude to Owen by welcoming him to the dedication of their new chapel, and a bridge was sealed once again.

While Fort Owen State Park stands today as a token of more thriving times between multiple community members, the fact that it’s still standing at all is an incredible feat.

Sitting on 1.9 acres, this small state park features buildings, period furnishings, and restored rooms – an opportunity to look into past lives lived.

We like to come here with a packed picnic and imagine life for each of these community members, all different but just the same.

Keep in mind that there’s no visitor center for this park, as well as no fees. Just show up to today’s history lesson and enjoy your surroundings!

We love the area surrounding Fort Owen State Park for its unique American history of firsts, as well as its historical exchange between indigeneous tribes and missionaries.

But let’s be honest, we also love a brewery or two, so let’s get into some main attractions in the beautiful Bitterroot Valley. 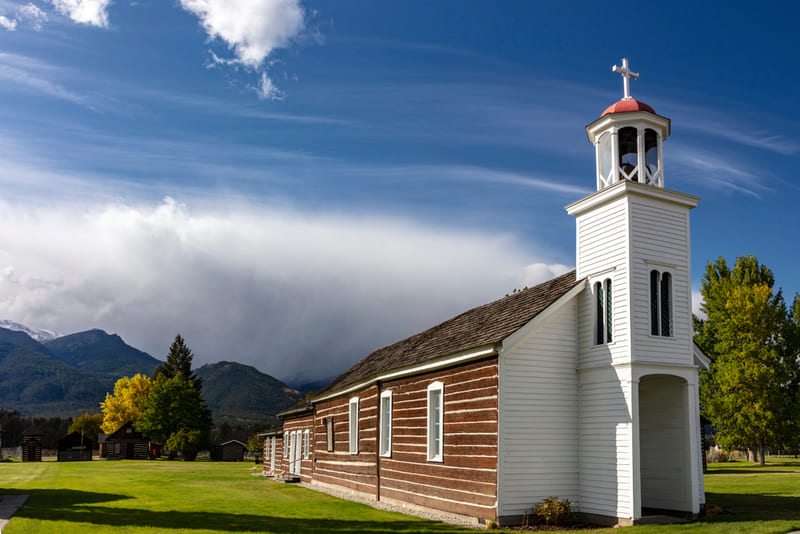 We may have mentioned the crossover between Fort Owen State Park and St. Mary’s Mission above, but there’s more to the story, and it all rests on the shoulders of one man: Father Anthony Ravalli.

Sure, there were other players, but Ravalli was recruited from Italy in 1845 to help build St. Mary’s Mission after persistent Salish requests for Blackrobes, or missionaries, and he was the right man for the job.

Acting as a community bridge in the 1840s, Ravalli was something of a renaissance man who compassionately and effectively communicated with indigeneous tribes and advocated for intentional progress. But more than that, he was a beloved priest, sculptor, pharmacist, confidant, healer, and machinist – a Father of all trades, if you will.

At St. Mary’s Mission, you can see the echo of his footprints everywhere you walk, starting with the chapel mentioned above, as well as his living quarters and pharmacy.

We love the replica of a Salish encampment, showcasing his skill set as a community bridge between indigeneous culture and his own belief systems.

If you can only visit one other site in Stevensville on your trip to Fort Owen State Park, we highly recommend this connected mission.

We’re not going to leave you hanging on the brewery, either! Check out Blacksmith Brewing, especially their Pulaski Porter and Brickhouse Blonde. Yum – you’re welcome! 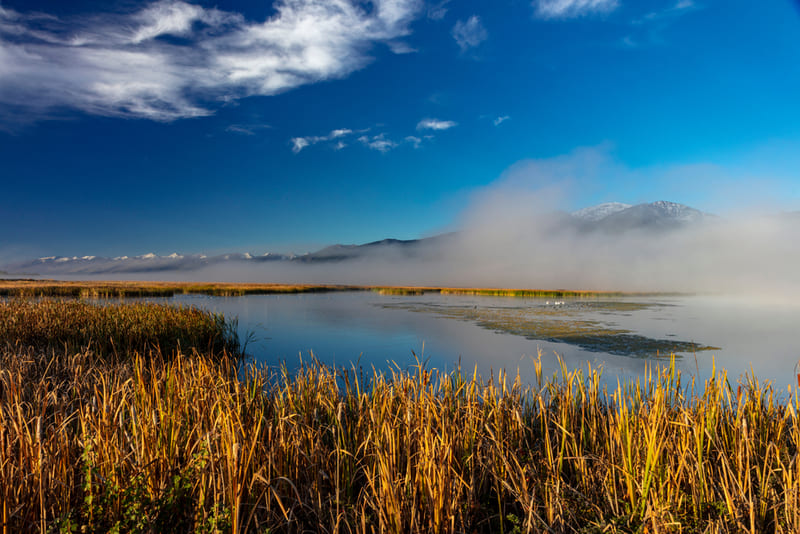 A five-minute drive north to a beautiful wildlife refuge? Yes, please! Lee Metcalf National Wildlife Refuge is exactly that: a respite from daily life, featuring varied landscapes, wetlands, meadows, and most of all, birds.

If you play Bird Bingo, this is your spot, folks. Sitting at 2,800 acres, this wildlife refuge was created in 1964 as a home for migratory birds, so depending on your arrival time, you’ll have access to different species.

But why stop at birds? Beavers, coyotes, and porcupines all call this beautiful space home, and you’ll have access to all of them via its 2.5 miles of hiking trails.

Hunting and fishing are also popular sports at Lee Metcalf, and it’s open year round for your recreation of choice.

Also, it’s worth learning about Senator Lee Metcalf, who was a longtime member of the Migratory Bird Commission and a gentle nature lover at heart.

After some reflection in nature, head back to Stevensville for a delicious meal at local favorite, Mission Bistro. It’s on the fancier side, but their small plates were made to be eaten after a day of bird watching.

Let’s head south to neighboring Hamilton because we love their museum, historical society, and personal stories about their quaint Montana Cafe.

The best part of the Ravalli County Museum and Historical Society? The Discovery Room. We loved learning about the introduction of European explorers and settlers to the Salish tribe, but we also enjoyed the Trappers & Miners section.

If you’re more into the natural history and wildlife or local heroes, the Natural History exhibit will satisfy your curiosity about the natural life and photography of the area.

We’re also huge fans of their virtual exhibits for kids and adults, especially the exhibit on Animals and People of the Ice Age.

Also, do you recognize the Ravalli name? Yep, that’s the same beloved Father Anthony Ravalli of St. Mary’s Mission who grew so large in the hearts of locals that they named their county after him. Now that’s love.

While museum hours vary, you can easily find them on the Ravalli County Museum website.

Fort Owen State Park is tiny, but it’s surrounded by the Bitterroot Mountains – so if you’re into recreational sports or activities, you’re truly in luck. Let’s dive a bit deeper into the beautiful, cool pond that is Ravalli County!

While we’re huge fans of the Kootenai Creek Trailhead and Bass Creek Trail, we wanted to head back to Lee Metcalf National Wildlife Refuge for a moment.

Remember those 2.5 miles of trails? They’re some of our favorites in the entire area, surrounded by wetlands and the sounds of birds.

But if you’re looking for something a bit more adventurous, you can’t go wrong with St. Mary’s Trailhead, Willow Creek Trailhead, or Bear Creek Trailhead. Either way, you’re bound to find plenty of spots to hike or bike around in the Bitterroot Valley. W

e also highly recommend checking out the Bitterroot Backcountry Cyclists for group rides and a tight-knit community of passionate cyclists. If anyone knows where the good routes are, it’s them!

Here’s the good news: Stevensville has plenty of places to swim and fish during the heat of the summer months – or bravely attempt ice fishing during the winter chill. The not-so-good news? You may have a hard time figuring out where to start! We’re here to help.

Our favorite swimming spot is Log Pond on Bass Creek. The short hike up to the pond leads to a picturesque secluded area for cooling off our feet and our furry friends’ feet. It’s absolutely dreamy – typical of a Montana landscape.

And we love trout fishing in the beautiful waters of the Bitterroot Valley. Troutzoola Montana Fly Fishing has really got some experienced folks leading that station;  we always come back with big smiles after time on the water with Troutzoola.

Fishing with some friends? Check out Poker Joe Fishing Access Site for a dreamy spot, but just be aware that there’s no boat ramp so you may need a helping hand to get a boat over to the water.

Just a bit north of Stevensville, you’ll find our favorite camping spot, but try not to tell too many people about it. We don’t want it getting too crowded! Ready? Chief Looking Glass Campground.

An absolutely beautiful hidden gem where we can stick our feet in the water and relax with loved ones. But it is outdoor camping, after all, so don’t forget your bug spray!

Another favorite spot is Larry Creek Group Campground. As you can imagine by the inclusion of the word “group,” these grounds are a bit more popular, less spacious than Chief Looking Glass, but it’s a beautiful area with lots of trails.

Okay, one more: Charles Waters Campground. Absolutely gorgeous diamond in the rough for those who like dry camping, surrounded by forests and trails. And, you’ve got 22 campsites at your disposal! Welcome to Montana! 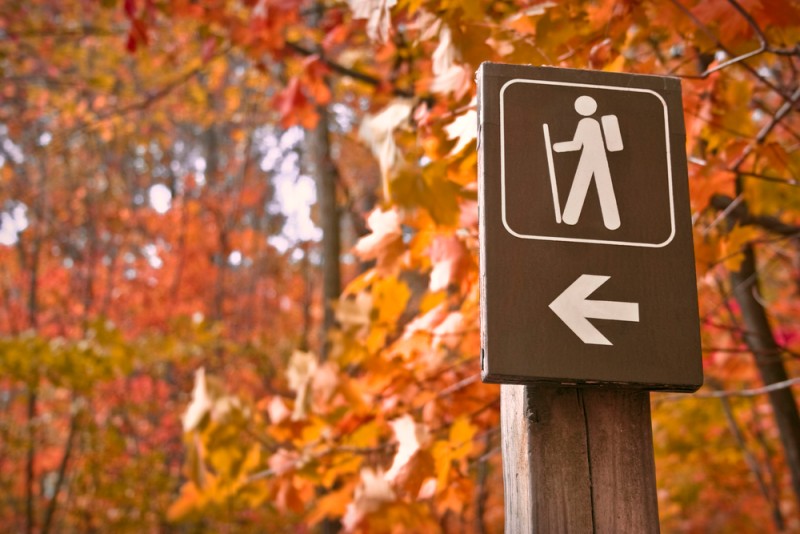 What’s not to love about the Kootenai Creek Trail? It’s got a picturesque waterfall, and it’s definitely family-friendly, despite its length. In fact, we usually like to break this one up into smaller chunks, unless we’re feeling particularly adventurous.

We love this trail’s suspension bridge (careful!) and rocky paths, but it’s all about that waterfall. The stream is definitely fast-moving – rapids style! – but it’s incredibly relaxing to walk along, plus all the gorgeous wildflowers. Hello, Indian Paintbrushes!

Don’t be intimidated by those 19 miles! However long you decide to hike up Kootenai Creek, it’s worth it every time.

Another popular hiking spot, you’ll love the butterflies, roaming chipmunks, and bluebird skies. But the best part is the hike up to Beaver Pond, a spot we love cooling off – and so does everyone else.

With that in mind, you may see a lot of hikers on this trail, so start earlier in the morning for a meditative hike through Big Sky Country.

One more thing of note: people like to come up Bass Creek Trail on horses, so be mindful of where you step!

This one is a nod to St. Mary’s Mission and Father Ravalli, so it seems like a good place to circle back and end our journey. St. Mary’s Peak is an uphill climb, for sure, but it’s scenic at every turn.

If you come during the winter months, pack warmly due to frequent winds at the time, but if you’re arriving in another season, you’re in for a treat.

We do want to mention that the road up can be quite rocky, as well as the last trek down, so bring an all-terrain vehicle or 4×4. Your tires will thank you on the way down!