Faced with the choice between heading to a state known by such names as ‘Big Sky Country’, the ‘Treasure State’, and ‘Land of the Shining Mountains’ or passing across the border to another place known as the ‘Gem State’ as well as the ‘Potato State’…which one is it to be in the Montana vs Idaho discussion?

The Big Sky Country with vast and open blue skies, Montana is a north-western state synonymous with rugged yet beautiful natural scenery sweeping down from the western Rocky Mountains to the flatter, eastern prairie lands.

Certainly, there is plenty of scenery, outdoor recreation, and other attractions here in this uniquely unspoiled state.

Although probably most well-known for its ‘Famous Potatoes,’ Idaho also has an alternate nickname related to treasure and gems. It is a place comprising a different kind of wild beauty that can be seen in the snow-capped mountains, the fast-flowing rivers, the contrastingly placid lakes, and the thick, dense forests.

There are a couple of other major factors to look at when comparing these two similar-but-different North American states. So without further ado, let’s get right into this Montana vs Idaho comparison and see how they measure up.

Idaho has a higher population than Montana and a much smaller landmass—so more people in a smaller area. In fact, Idaho’s population density has been steadily rising since the 1970s.

So Montana seems like the logical place to head if you like the idea of having some space in which to spread your wings. Montana wins here. But there are other considerations.

Montana vs Idaho: Lifestyle and Cost of Living 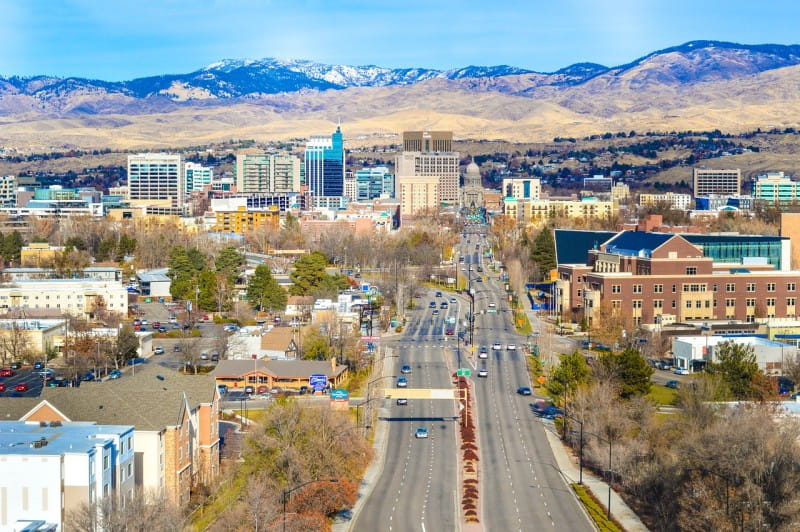 So this one is not actually as straightforward as you might think it should be. Not least of all when you start taking into consideration the various different taxations and how they are applied in the two states.

It seems more and more American people want to get some of those Idaho potatoes. At least according to the fact that in recent years Idaho has been the fourth-most popular state to move to, according to U.S. News Reports.

An unbelievable 18,000 new residents moved to Idaho in one year alone—mainly from California, in 2018–followed by others from places like Washington, Arizona, and Colorado.

The moderate Idaho annual cost of living, at around $35,459, is 2% less than the national average, making it one of the cheapest states in the Pacific Northwest to live in and a major draw.

However, the real downside is the price of homes in Idaho, which weigh in about $30,000 higher than the national average.

Even though Idaho has a low cost of living it is still cheaper in Montana on average, where daily living costs of around $107 compare favorably to the $131 or more you’d need in Idaho.

There are other differences that could affect certain people in particular ways, though—so let’s check them out.

For instance, Montana has no sales tax, whereas Idaho does. A new car costs less in Montana, with no tax added to the price. The downside of this is that shelling out for a set of new license plates for your new car can be hefty.

In Idaho though, the car’s sales tax may cost $3000, but the cost of the plates after that won’t amount to much more than $40, every year after that. You can find further cost of living comparisons between the two states HERE.

All property taxes are higher in Montana too, by the way—although the upside is that Montana is a renowned outdoor enthusiasts’ paradise, and for good reason. It is not uncommon for locals, such as farmers, ranchers, or oil sector professionals to work outdoors and the natives take advantage of every opportunity to go camping, hunting, and hiking.

You could say Montana gets this one but it depends on your situation to some extent.

The Wild West, as it is known today, refers to a period in American history that began in the 17th century and breathed its last around 1912 when the last of the western territories became states.

Both Idaho and Montana today exhibit strong links back to these times and the cowboy culture that was born of it.

And when you consider that the entire region known as Montana was part of Idaho along with a few others in 1863, it’s not too difficult to imagine the similarities and closeness of some cultural aspects.

The first cowboys in the area were livestock herders before the 1800s. There are still some modern-day Cowboys in the north-western regions who continue ranching and farming across Idaho and Montana, as well as in Washington and Oregon. And of course, a major attraction for various towns in all states remains the rodeo.

Montana happens to be home to a few of the finest grass in the country, which means the cows are grazing. It is no secret that the existing ranchers are some of the hardest-working cowboys and cowgirls in America.

They certainly don’t shy away from being the embodiment of the tough, hard-working, and not afraid of getting hurt or dirty ranch types.

The spirit of the old west is still very much alive and well here and at least half of the state’s population is involved in farming or ranching in one way or another, and depending on where you are in Montana, sometimes it can seem like there are literally cattle and horses are around every corner.

Anyone from Montana will definitely attest to the fact that the state is the most “cowboy” of them all. They may also add the comment that ‘Montana Cowboys work from horseback, not from an ATV’.

They firmly believe that moving cattle from summer meadows in the mountain regions in the winter can only be done by horse. The west side of the state is proof of a true cowboy state in places like Kalispell, and to many, Montana is as cowboy as it gets. 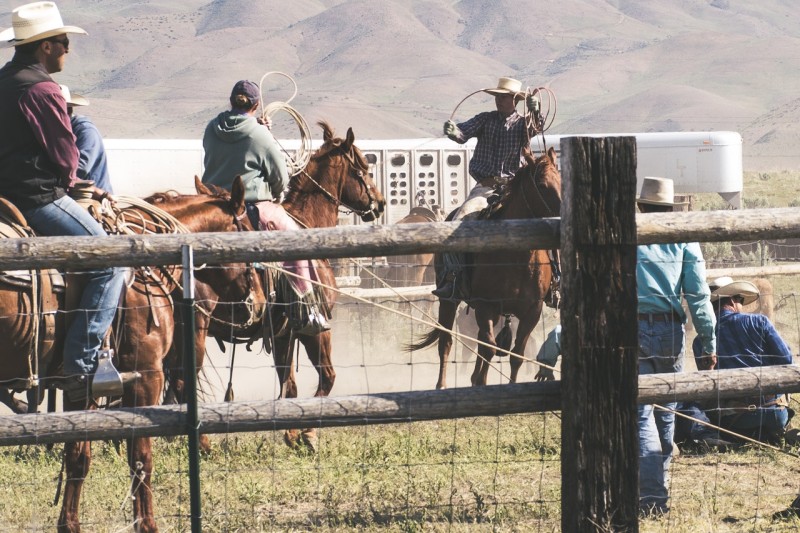 There is plenty of cowboy culture around east Idaho. Treasure Valley and the greater areas around Boise are more inclined to ranching, rodeos, and cowboy-type activity, although it’s rare to see anyone wearing a cowboy hat in Boise these days. There is a touch of the cowboy culture heading a bit further west towards the state line.

It is still possible to see plenty of cowboys in Blackfoot and Idaho Falls, where the War Bonnet Roundup–the oldest rodeo in the state–is hosted. On top of that, to the east of I-15 all the way to the Wyoming border the landscape is largely is ranch country. Swan Valley, Tetonia, Victor, and all the towns along the lines of the Teton Range still have leanings towards cowboy culture.

Difficult to say who wins this one—let’s call it evens.

Montana vs Idaho: Landscape and Terrain 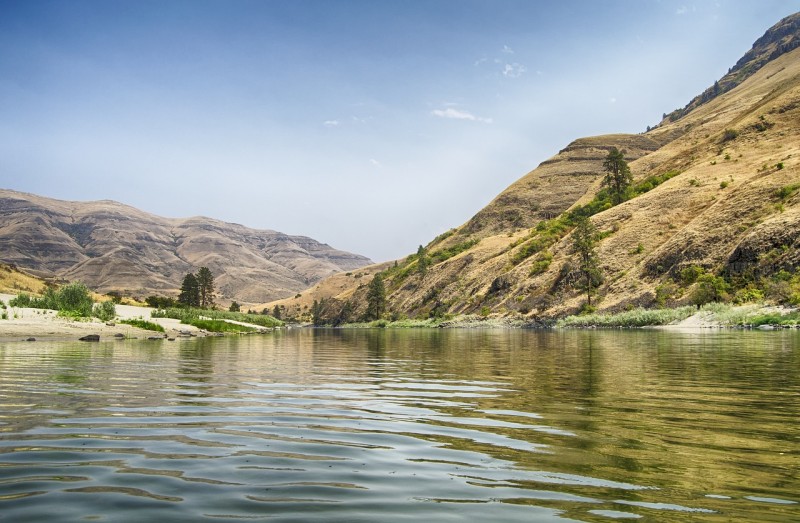 A lot of Idaho landscape probably goes under the radar than Montana’s does–but that doesn’t make it any less breath-taking. Try kayaking the lush and secluded Selway River Wilderness, or see how the Craters of the Moon National Monument literally makes you feel like you are on another planet.

The Monument and Preserve in the south of the state exhibit a different type of rugged Idaho landscape in the form of an ancient lava flow, demonstrating the little-known fact that the area was formerly volcanic.

Outdoor exploration couldn’t be easier in Idaho. From the Northern Panhandle to the Southern Snake River Plain, the state and national parks in Idaho uncover some outstanding landscapes including jagged mountain peaks, scenic and wild rivers, not to mention the tallest freestanding sand dune in North America.

Idaho State Parks offer an even more diverse landscape by way of huge pine trees, shimmering alpine lakes, and the trails on display through the public lands.

Idaho has several National Park Service units, all with slightly varying terrain to explore. Sawtooth National Recreation Area is an obvious example of some of the state’s natural beauty, where the landscape features 40-plus mountain peaks with elevations of 10,000 feet or more. 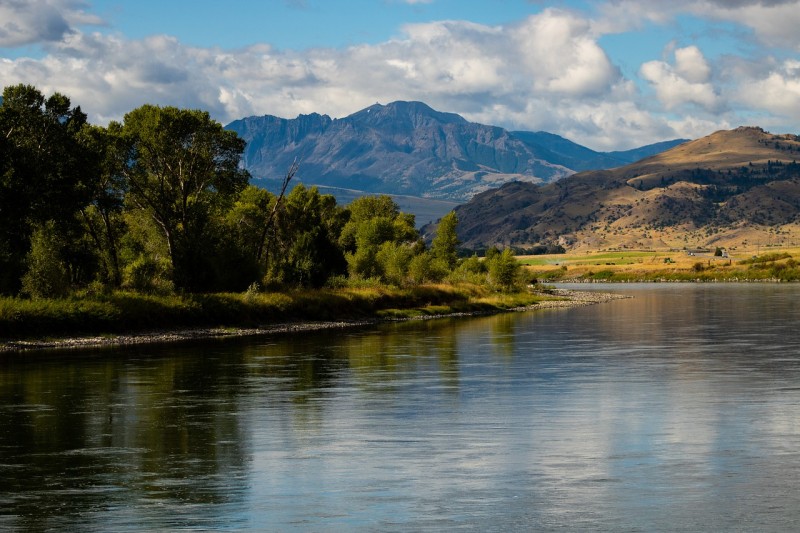 Montana is the largest and most well-known vast and rugged outdoor terrain in North America. Glacier National Park is a major attraction and the skiing mountains are undoubtedly some of the best in the world. The rivers in Montana are big, beautiful, and wild.

The northern prairie lands meet the Rocky Mountains, with all points in between Rivers, alpine lakes, state parks, wilderness areas, and some of the best fishing there is. Many of the recreation trails in Montana also have a historic edge relating back to the gold-boom days of the prospectors and first settlers.

This is another tough one, but Montana has more land and fewer people—what can we say to that?

In It to Win It – Montana vs Idaho Final Verdict

By comparison, Montana and Idaho do have some striking similarities. The close geographical location of both states obviously affects that, on top of the fact that at one time they would have been classified under the same region.

However, it does seem that in some ways Montana has a few more positives going for it than Idaho does. Don’t get us wrong, Idaho is obviously a wonderful state to spend time exploring in its own right, but when it comes down to the debate of Montana vs Idaho, Montana comes out slightly on top here in a few areas.