Montana has one of the most beautiful and abundant natural environments in the United States and is home to thousands of species of plants, animals, and aquatic life.

However, among the state’s natural diversity are some species that simply don’t belong. Whether legally or illegally, on purpose or by accident, dozens of foreign plants and animals have been introduced into existing habitats over the past century.

In many cases, these invasive species in Montana have become direct competitors with native species in the state and, as such, pose severe threats to the already existing ecosystems that we know today.

In this article, we will take a look at the invasive species currently causing issues in Montana.

From foreign aquatic life to fast-spreading weeds, these nine invasive species in Montana pose some of the most serious threats to the state’s current natural environments and resources. 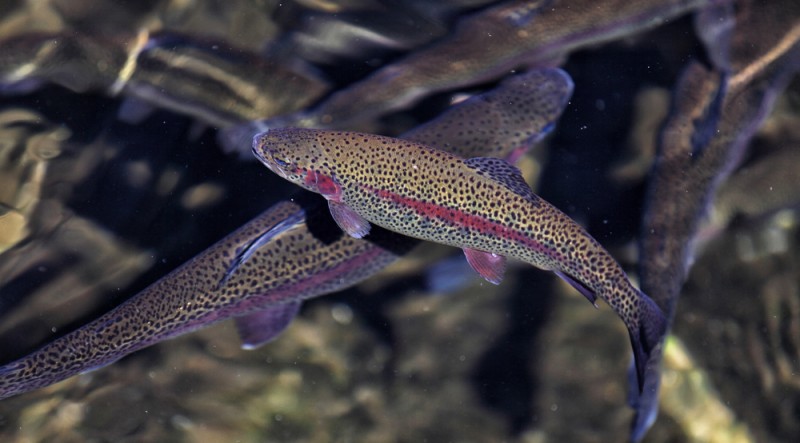 Also known as the Montana Steelhead, the invasive Rainbow Trout is a species that is actually native to some parts of the state. However, this native range is believed to be confined to the limits of the upper Kootenai River drainage.

Starting in 1889, large populations of Rainbow Trout have been introduced throughout Montana, and today they inhabit nearly all suitable habitats in the state. This includes a massive range of viable ecosystems, such as ponds, reservoirs, lakes, and streams.

With their ranges continuing to grow, the Rainbow Trout has become a direct competitor of several of Montana’s other trout species, namely the Westslope Cutthroat Trout, which also happens to be the official State Fish of Montana. 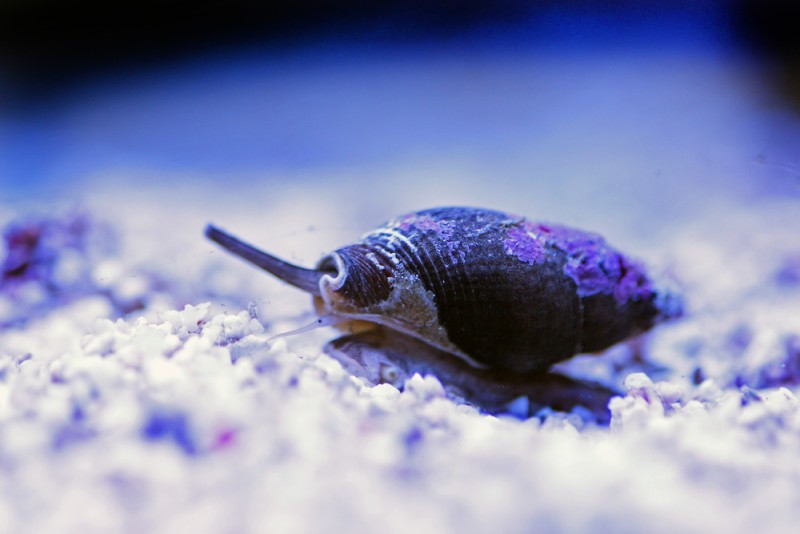 Native to New Zealand but widespread across Australia and Europe, the New Zealand Mud Snail is an invasive species in Montana. Populations were first documented in 1995 but are believed to have been introduced to the area a few years prior to their discovery.

The New Zealand Mud Snail reproduces by cloning, and populations multiply, with a single female specimen producing up to 230 offspring each year. Since its first discovery in Montana’s Madison River in 1995, the species has spread to the Beaverhead, Ruby, Bighorn, Missouri, and Yellowstone Rivers.

Thanks to their rapid growth rate and large population densities, the New Zealand Mud Snail has become a severe threat to native bottom-dwelling species it easily out-competes.

Many local Montanan snails, mussels, and aquatic insects that the native fish feed on have been displaced since the introduction of the species. 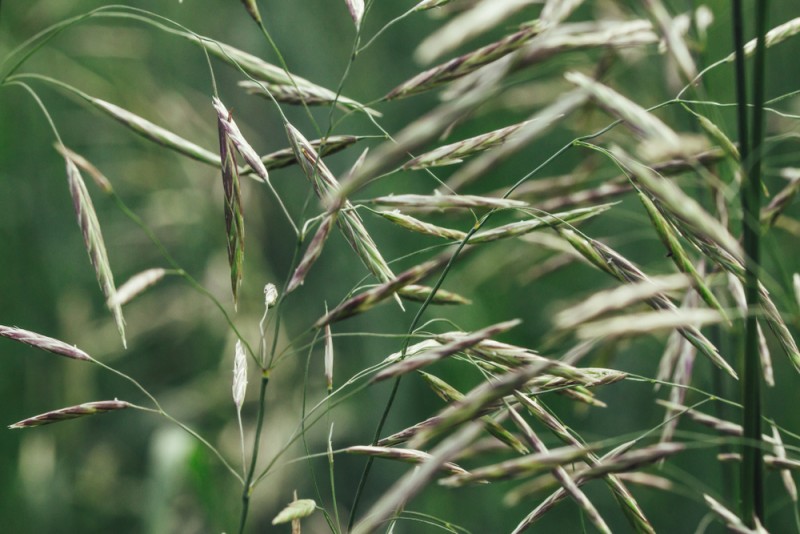 Native to southwestern Asia, Cheat Grass is believed to have been introduced in North America several times over the past century. However, the first occurrence likely happened as early as 1850 when contaminated soil from a ship ballast was dumped in St. Louis, Missouri.

Since then, reports of the invasive plant species have sprung up across North America, including in Montana, where populations have been detected in Missoula County, Ravalli County, and Gallatin County.

Recognizable as an erect bunch grass that stands from 4 to 30 inches tall and is covered in hair, the invasive Cheatgrass has become a state 3 regulated plant in Montana.

The invasive plant is a serious threat to native plant species. In addition, it reduces the biodiversity of local ecosystems while increasing the risk of wildfires within their habitats. 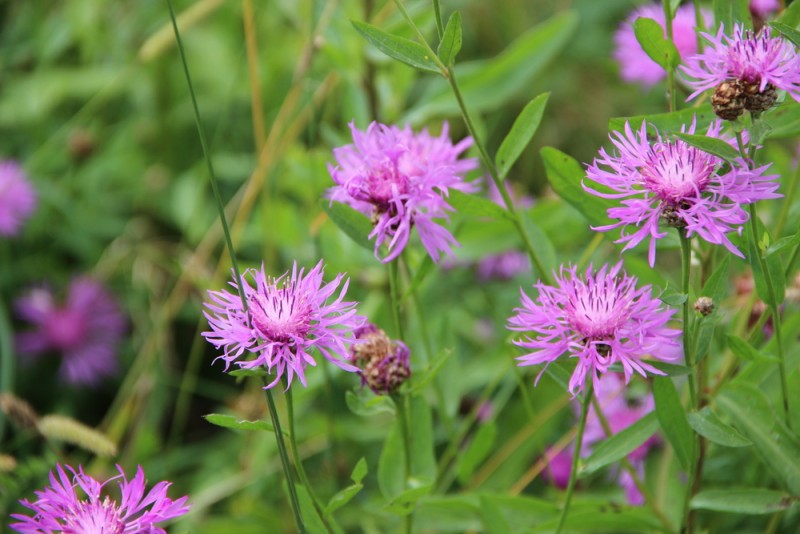 Scientifically known as Centaurea stoebe, the Spotted Knapweed is a taprooted, rosette-forming perennial native to Eurasia but introduced worldwide, including to North America starting in 1883 as a contaminate in alfalfa.

Today, the weed is found in almost every American state and several Canadian Provinces, with local ranges covering over 5 million acres of Montana’s countryside. The most common occurrences of the plant are regions where land has been disturbed, such as grasslands, roadsides, meadows, open forests, and woodlands.

The extent of the Spotted Knapweed has become a cause for concern in Montana as it displaces native plant species, reduces the forage value of the land, and increases erosion.

To date, the total losses to Montana’s livestock industry caused by the invasive Spotted Knapweed are projected to be somewhere between $42 and $155 million. 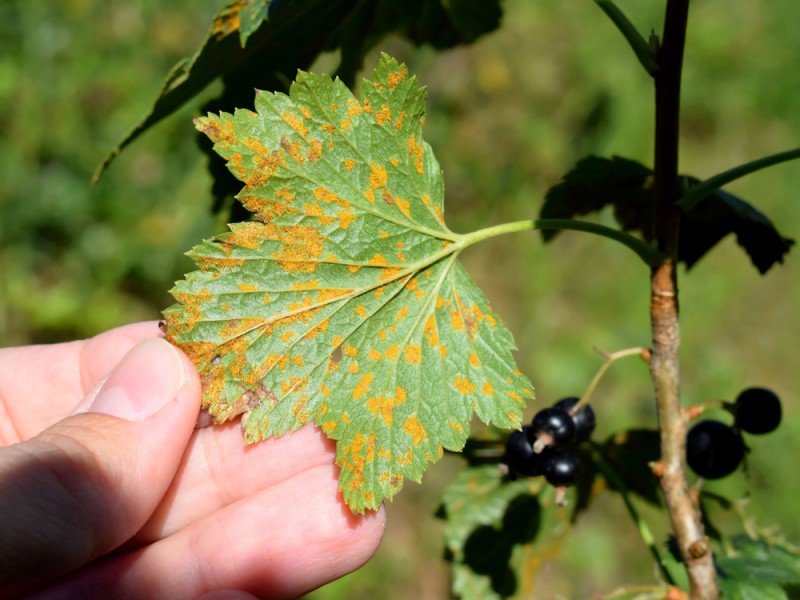 Native to China, the White Pine Blister Rust is a fungal pathogen of five-needle pines that was believed to have been introduced to North America around 1900.

Since then, the species has spread to every American state except Alabama, Arkansas, Florida, Kansas, Louisiana, Mississippi, Nebraska, North Dakota, Oklahoma, South Carolina, Utah, and Texas.

In Montana, the White Pine Blister Rust can be found in Glacier National Park and the Bob Marshall Wilderness.

Since the life cycle of the fungus requires a susceptible pine host, the introduction of the species has caused tumultuous effects on these ecosystems and is responsible for the decline of Glacier National Parks Northwest White Pine stands by 90 to 95 percent. 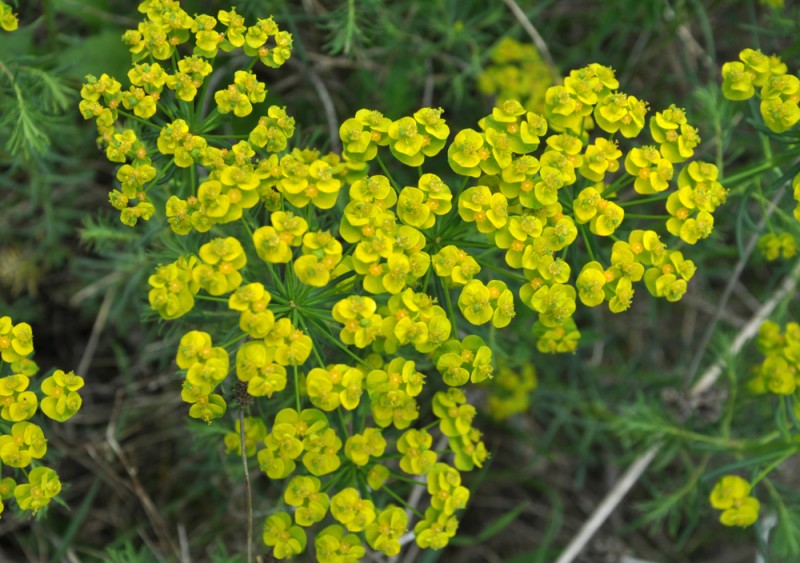 While the exact source of the introduction of Leafy Spurge to North America is unknown, it is generally believed to have been brought here from its native Eurasia in the late 1800s.

Today it covers over 600,000 acres of Montana’s countryside and is considered a significant threat to the state’s livestock industry. Containing an irritant latex, the plant is known to cause blisters and blindness. As a result, cattle are often deterred from grazing in areas with greater than 20% coverage.

Considering the Leafy Spurge tends to grow in grasslands, meadows, and other common grazing areas, the number of viable grazing zones for cattle in Montana is slowly declining due to invasive species’ introduction to the state. 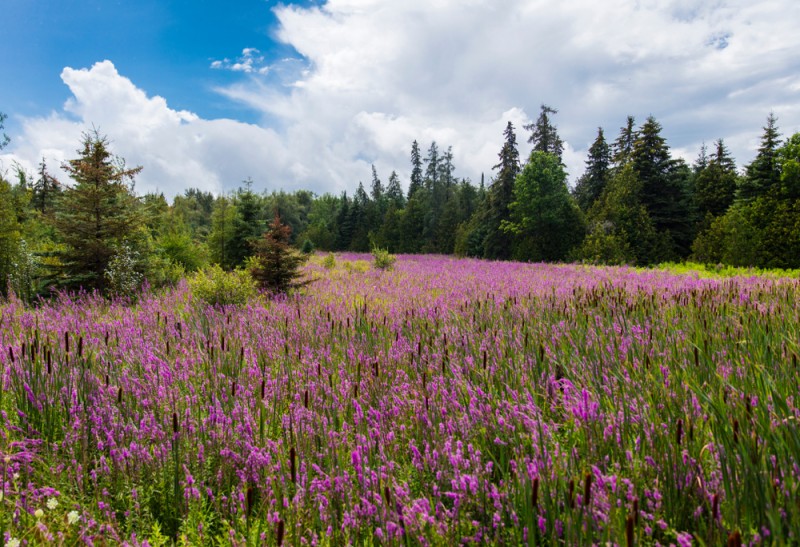 Another invasive species native to Eurasia is the erect perennial Purple Loosestrife. First introduced to North America in 1814 along the northeastern coast, the first herbarium specimen did not arrive in Montana until 1980 near Shelby.

Since then, populations of the Purple Loosestrife have become widespread throughout the state and frequently inhabit disturbed perennial and seasonal wetlands, such as marshes, pond margins, ditches, and valley streams.

Having spread to these wetland habitats across 10 Montanan counties, the invasive Purple Loosestrife wreaks havoc on their ecosystems.

They do so by displacing the native wetland plants that currently occupy their niche while offering less food and habitat value for waterfowl and other wildlife. 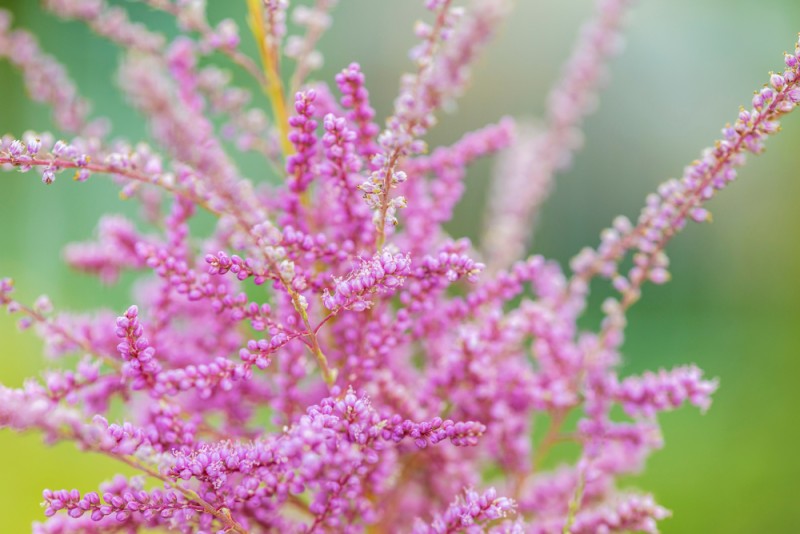 Native to the middle east, the Salt Cedar is an invasive shrub that reaches heights of 1 to 5 meters and was first introduced to North America in the early 1800s as a garden ornament, windbreaker, and for use as erosion control.

Earliest reported specimens in Montana date back to 1971 in Big Horn County, but the Salt Cedar is believed to have been first introduced in the state during the 1960s in Treasure and Rosebud Counties.

It is known to lower stream flows and water tables while increasing soil salinity and displacing other native species in the area.

A threat to local salmonid fishes, the Whirling Disease is a parasitic infection first introduced to the U.S. in 1956, when it was accidentally brought over from its native Europe.

The infection derives its name from the narrative, tail chasing behavior it causes in fish. More severe symptoms include physical deformities of the head, spine, and cartilage, which can ultimately lead to the death of the fish.

Today the invasive parasite can be found in 20 western states, including 95 bodies of water in Montana. The species has proven to be detrimental in many of its infected ecosystems and is responsible for an 80% decline in wild trout populations of the Madison River.