Montana is a state known for its pristine mountainous landscapes and picturesque lakes and rivers. And occupying these pristine natural habitats is a massive array of animal life that makes The Treasure State one of the most biologically diverse in the U.S.

With over 100 species of mammals, approximately 440 bird species, and about 90 species of fish, Montana is filled with exotic wildlife just waiting to be explored by locals and tourists alike.

Unfortunately, due to causes such as loss of habitation, over-exploitation by humans, and the introduction of other harmful invasive species, many of Montana’s native species have entered a state of decline. 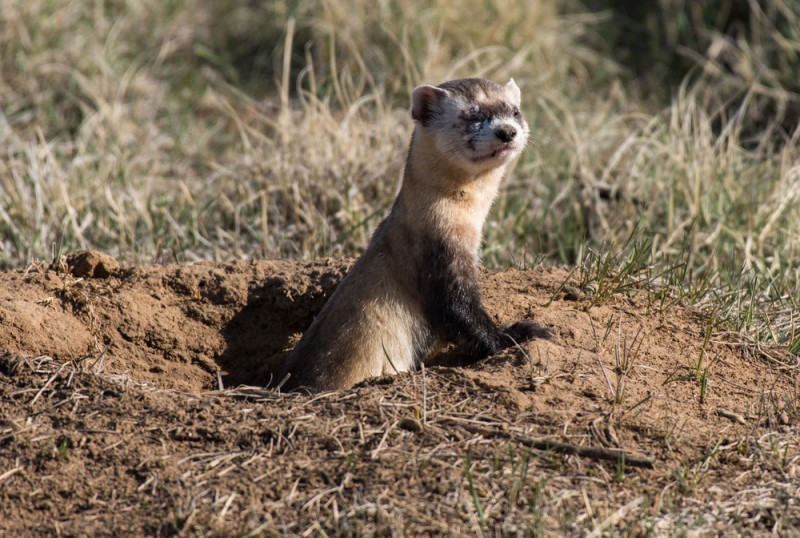 Considered the rarest mammal in North America, the Black-footed Ferret was once believed to number more than five million in the United States in the early 1900s. Today, approximately only 300 black-footed ferrets are living in the wild at dozens of sites across the U.S., including several locations in Montana.

Weighing only two pounds and measuring about two feet long, the Black-footed Ferret was once widespread throughout the state and is highly dependent on prairie dogs for habitation, living in the abandoned colonies of the burrowing species.

Naturally, the Black-footed Ferret experienced a decline in population as a direct result of the human eradication of prairie dogs, which now only occupy about 1% of their historic range. 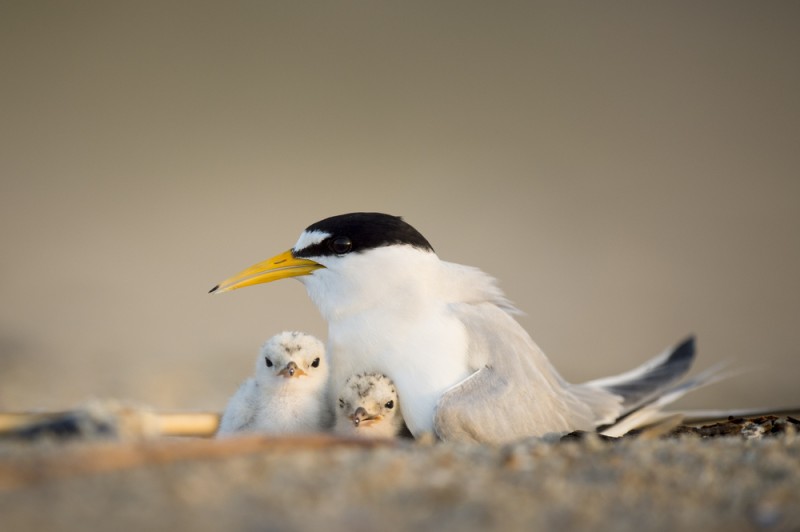 Averaging 21 to 24 cm in length, the Least Tern is the smallest tern in North America and is very distinctive thanks to its yellow bill and white forehead. Historically, the Least Turn could be found on the Atlantic, the Gulf of Mexico, and the Missouri, Mississippi, and Rio Grande rivers.

Of these natural ranges, the interior population of the Least Tern is currently endangered. This includes the populations that breed in the Mississippi, Missouri, and Rio Grande river systems.

In Montana, the Least Tern breed along the Yellowstone River, south of Miles City, and along the Missouri River, just below the Fort Peck Reservoir. However, like other regions in the species’ interior range, these breed zones have become threatened and destroyed by the construction of dams and the channelization of rivers.

Luckily, while there is no way to restore these breeding zones to their natural state, several river segments still offer suitable habitats within Montana and along other rivers of the tern’s interior range.

Montana officials recommend avoiding sandbars where the Least Tern is present to protect these populations.

Adult birds squeal loudly while circling overhead when a visitor approaches too near their nest. If observing this behavior, leave the area immediately. 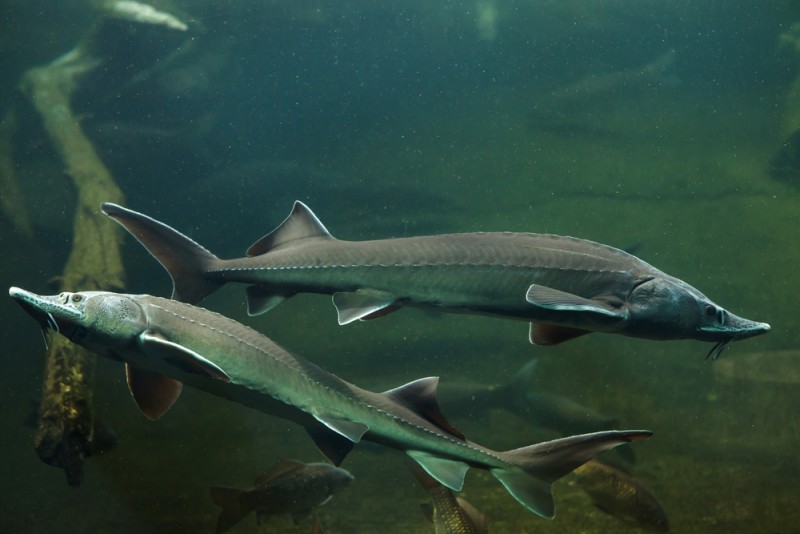 Listed as an endangered species by the U.S. Fish and Wildlife Service in 1990, the Pallid Sturgeon is one of two sturgeon species native to the Missouri and Yellowstone rivers and is the largest and rarest freshwater fish in North America.

Reaching over 6 feet and weighing over 75 pounds, the Pallid Sturgeon can live to be over 50 years old and typically inhabit the sand flats and gravel bars at the bottom of large rivers with swift currents.

While only identified as a separate species in 1905, the historical data of the Pallid Sturgeon is limited. However, based on the catch records in the area, it is believed that Pallid Sturgeon was considered somewhat common in Montana until at least the 1950s. At this point, the population seemed to start to decline.

The reason for the species’ decline is the man-made manipulation of their native river system. Of the 3,550 river miles the species inhabits, all have been significantly influenced by human interference.

While efforts to restore some pieces of the rivers to habitable conditions for the sturgeon are being made, commercial fishers are also asked to play their part in the species conservation. 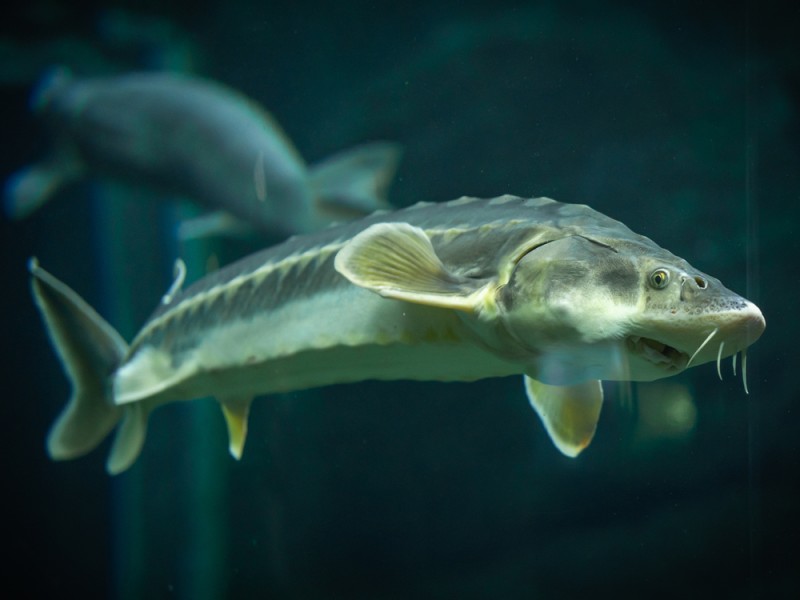 While the White Sturgeon is considered stable throughout its entire range in Northwest U.S. and Canada, the Kootenai River population is a cause for concern and is regarded as an endangered species in Montana.

While this small population may not seem as significant as only a tiny fraction of the overall species, the White Sturgeon in Montana actually preserves its own identity that has become a symbol of the state.

Restricted to the Kootenai River, Montana’s White Sturgeon population has been genetically isolated from others of its species for over 10,000 years. During this time, they have adapted to their environment and have followed a different evolutionary path than their relatives.

However, thanks to the operations of the Libby Dam reducing river flows during the sturgeon’s spawning season, the Kootenai River population has experienced a severe decline over the past 50 years and officially became an endangered species in Montana in 1990.

Along with the Pallid Sturgeon, the endangerment of the White Sturgeon could result in the extinction of all sturgeon in Montana and the end of a species that has occupied the state’s aquatic habitats for millennia. 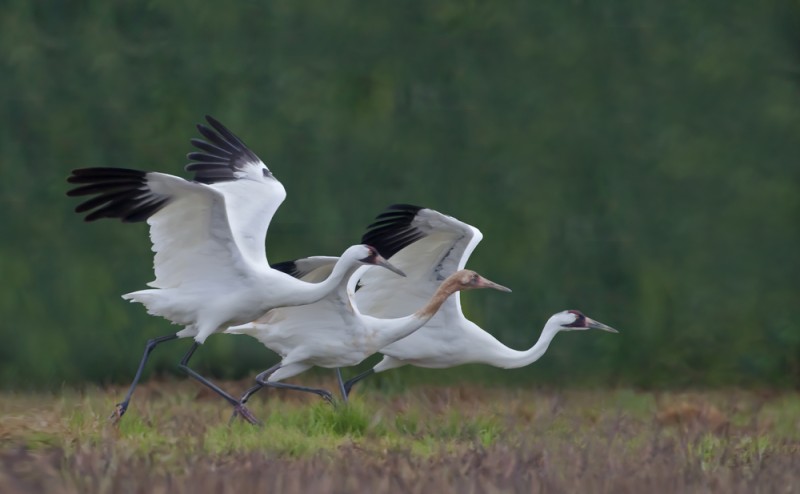 Standing 1.5 meters tall, the Whooping Crane is the tallest bird in North America and is easily recognizable by its lofty stature, black wing tips, and red markings on its head.

Long believed to be an endangered species in North America, the Whooping Crane historically was known to winter near the Gulf of Mexico. At the same time, their breeding range reached from Illinois to the northwest and passed through north Dakota and up to the Northwest Territories.

The Whooping Crane’s dwindling population was first brought to the forefront of conservation efforts in the first half of the 20th century, with the species’ total population being believed to have declined to only 16 individuals as of 1941.

Luckily, the species was given new hope when it was later discovered that the birds were also breeding in Wood Buffalo National Park in the Northwest Territories. However, even this population was in decline, and by 1970 the federal register added the Whooping Crane to the official list of endangered species.

Today, about 145 whooping cranes migrate across Montana between the Wood Buffalo National Park and the Aransas National Wildlife Refuge. They typically inhabit shallow wetlands, the destruction of which is the leading cause of the species endangerment.

Most known wild Whooping Cranes are currently marked with a colored leg band. Individuals should report the observation of these birds to a wildlife agency to help in the conservation efforts of this endangered species.