Montana is no stranger to wildfire. Many of the greatest natural attractions of the state, and even some of the cities, have been touched by flame throughout its history, sometimes to devastating effect.

These are the most prominent Montana fires in the state’s history, and the marks they left on the population are undeinable.

Before the 20th century 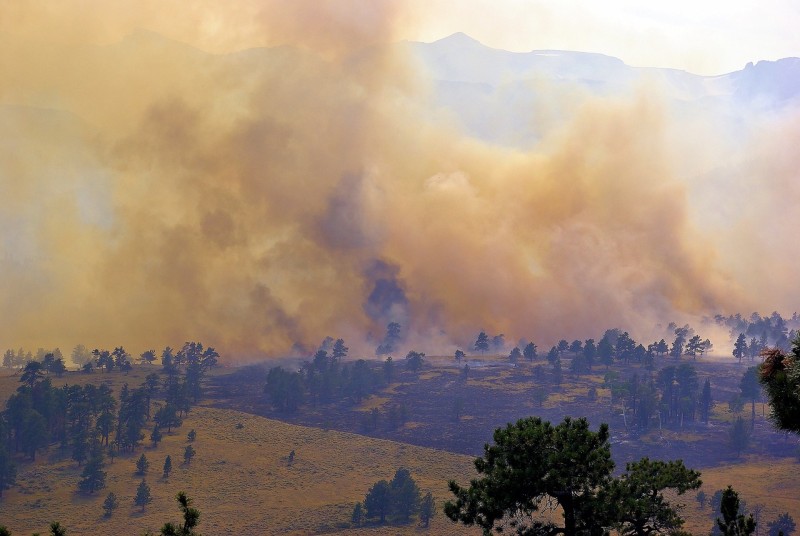 The area now known as Montana has always experienced fires. As the Forest History Society explains, “There have been fires in the forests as long as there have been trees to burn.”

Prior to white colonization in Montana, First Nations peoples purposely started fires to clear away shrubs and rubbish and create better grazing areas for their livestock.

Records show that some tribes used fire to defend themselves against enemy attacks. They also burnt fires to clear logs and brush that would grow into their trails.

Other than in the case of the fires that were strategically started, the most common cause of forest fires in Montana has been lightning. As the climate changed over the years, the warmer conditions made forest fires more common in the state.

One of the most notable fires that took place in Montana prior to the 20th century was the 1889 fire that struck the present site of the Spotted Bear Ranger Station in the Flathead National Forest. Some of the surrounding areas was also burned in the fire.

In 1903, a fire burned at Whitcomb Creek in the Flathead National Forest, along with Milk Creek.

While fire has been a constant throughout Montana’s history, the most famous (and most devastating) fire tragedy occurred in the early 20th century. 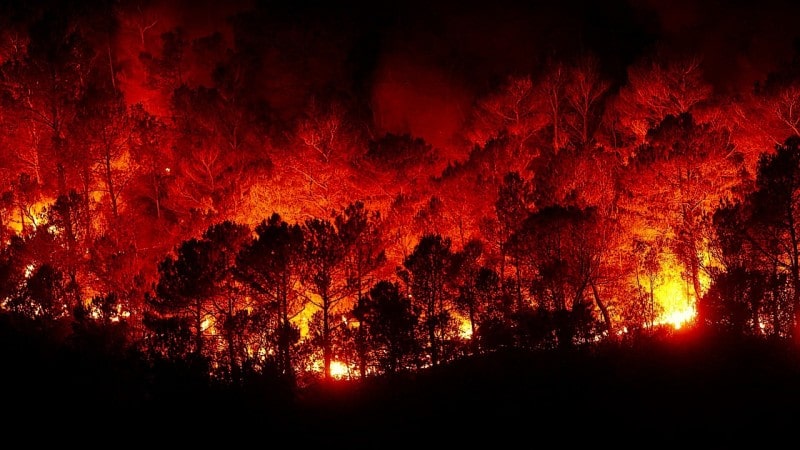 The Great Fire of 1910 wasn’t just the most significant fire in Montana history—it was one of the largest in American history and is even thought to be one of the deadliest in world history.

The year 1910 experienced unusually dry weather conditions, per the U.S. Forest Service. As the temperature rose throughout spring, with no rain to counteract them, fire broke out in June.

By the start of summer, there were around 100 different locations in the Northern Rockies that were burning.

An official cause of the 1910 fire has never been named, but experts agree that the largest factor that led to the fires was a new railway line that traveled through the Bitterroot Mountains.

Coal-powered trains that ran along the railway line spat hot cinders as they moved. As the trains traveled through the dense Bitterroot Forest, which was already drier than usual, disaster was just waiting to happen.

Fires raged through June and July, and by August, many of the streams in the area had dried up.

Part of the burning was attributed to local loggers and campers who accidentally started some of the fires. Arson was also suspected to be a contributing factor; some firefighters at the time may have purposely started fires to guarantee work for themselves.

An electrical storm in North Idaho in the middle of July also ignited some of the fires.

The peak of the terror came on August 20 and August 21, when the fire blazed across three million acres in northern Idaho and western Montana (via National Forest Foundation).

To make matters worse, hurricane-force winds swept up the debris from the forest, which created a blowtorch effect. Some accounts detail that flames shot hundreds of feet in the air.

Over a period of six hours, as the “blowtorch” raged through the area, many people believed that the apocalypse had come.

Trees were sucked up from the ground in the firestorm and all light had disappeared into the smoke by 4 p.m. in the afternoon. Fireballs were flying through the air at a speed of 70 miles an hour, which ignited whole mountainsides to fire in seconds.

The effects of the fire were felt as north as Saskatoon, Canada, as south as Denver, and as east as New York. Because of the blowtorch effect, the fire came to be known as The Big Blowup.

How did the fire come under control? 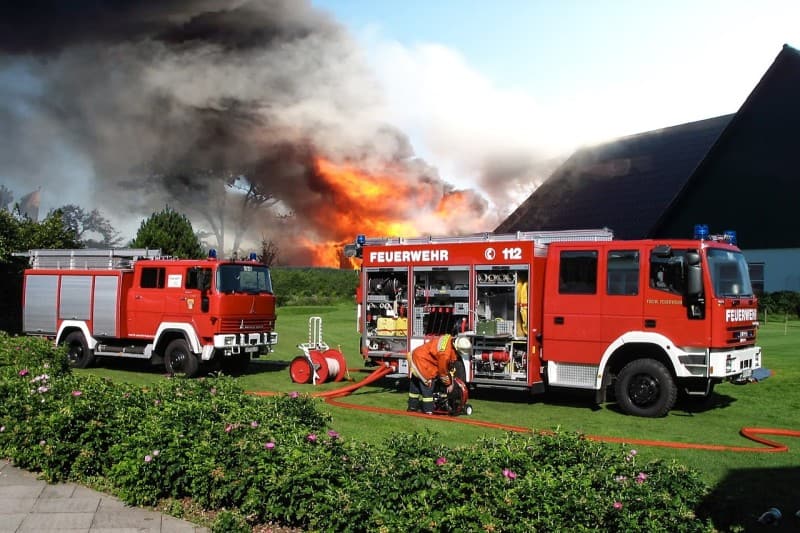 The winds that were keeping the fire raging began to slow after August 22, per Britannica. Temperatures also dropped, and rain hit on August 23. It snowed in the higher areas, which managed to help control the flames.

Were there any casualties?

Tragically, 86 people lost their lives in the fires. The majority of them were firefighters.

In addition to the human life lost, the land also suffered greatly as a result of the Great Fire. Enough timber to fill a 2,400-mile long freight train, or build 800,000 houses, was burned.

Across the entire Northwest, a total of 20 million acres of land were charred. The town of Wallace, Idaho, was evacuated and eventually, the whole east end was burned down.

It took decades to completely clean up the mess left by the fire and to rebuild what was destroyed. Fallen, burnt timber blocked trails for miles around.

The only positive to emerge from the Great Fire is that the tragedy led to innovation in fire-fighting policies in America. Forest Service practices, including forest management, were improved in order to prevent history from repeating itself.

To learn more about the Great Fire of 1910, check out this informative YouTube video.

Other fires in the early 20th century

As the 20th century went on, there were several more incidents of fire in Montana, though none were as prominent as the Great Fire.

The next significant fire was in 1919 when around 150,000 acres of the Flathead National Forest were ignited.

The fire was made worse by the limitations in communication and transportation at the time, as it took two weeks for a pack train to arrive from Coram to provide assistance.

Fast-forward to 1926, and there were more fires in the Tally Lake Ranger District, as well as in Big Prairie and the North Fork, and the Coram District.

The latter was hit by a man-made fire that began burning west of the Hungry Horse Reservoir and raged on to the Middle Fork of the Flathead River.

In 1929, Montana was hit by the deadly Half Moon Fire, which ravaged 100,000 acres of National Forest and privately owned land north of Columbia Falls.

The Sullivan Creek Fire also hit this year, which burned 35,000 acres in the Spotted Bear District. The Swan Valley was hit by several fires in 1934, and there were 360 small fires in the Flathead National Forest in 1940.

In 1961, the Bitterroot Forest was hit by the Sleeping Child Fire. The fire was instigated by an unfortunate strike of lightning into a ridge that contained fallen lodgepole pine, piled up to 15 feet deep.

Technology had majorly improved since 1910, but this wasn’t enough to stop the fire from growing.

Firefighters were dispatched immediately and planes were sent from Missoula, arriving within the hour. However, the fire was already four acres in size by that time, and too hot to be controlled. It ended up ravaging 20,000 acres of land.

Do fires still happen in Montana? 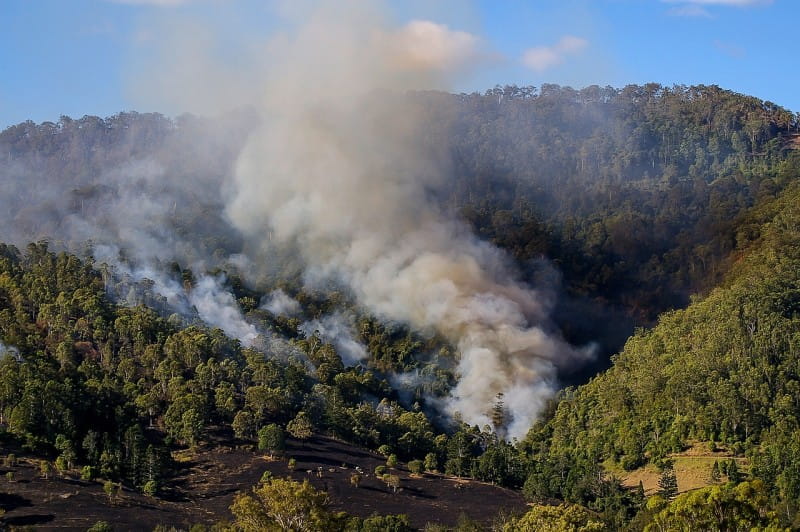 Sadly, fires still commonly occur in Montana. Arson and human-caused fires typically concern forest rangers the most, as these are normally ignited at lower elevations where there is dense forest.

By comparison, many fires are caused by lightning, but these typically hit higher elevations with less timber and often accompany rain or humidity, which makes it less likely that fire will rage out of control.

According to the Forest History Society, the Flathead National Forest alone experiences around 100 fires every year, though none are as damaging as the Great Fire of 1910.

The National Park Service explains that there has been a fire in Glacier National Park nearly every single year throughout its existence. The only year with no fire on record in the park was 1964, while the worst year for fires was 1936, which saw 64 in total.

Communication, transportation, and firefighting practices have improved significantly over the last century, and as such, most fires that hit Montana are managed quickly and kept small.

In particular, the use of planes in dealing with fires has dramatically improved fire-fighting results.

Home to so much dense forest, Montana naturally experiences wildfires and has done so throughout its history. No fire has done as much damage as the Great Fire of 1910, which forever changed fire-fighting practices in the state (and the country).

Although authorities have better tools at their disposal to deal with fires now, devastation from deadly, uncontrolled fire is still possible.