Yellowstone National Park has endless natural marvels that attract millions of visitors from all over the world. One of the most photographed and iconic wonders in the park is the Grand Prismatic Spring, a hydrothermal feature home to microscopic organisms.

Here’s what you should know about visiting the Grand Prismatic Spring. 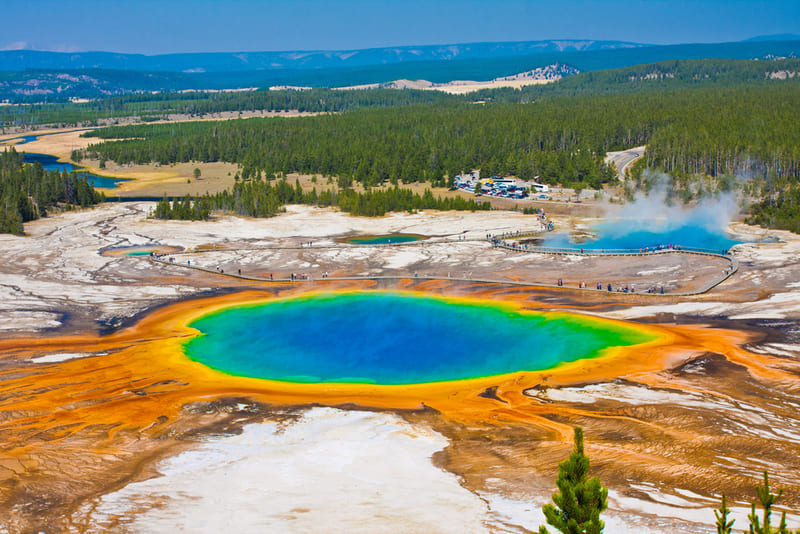 Why is the Grand Prismatic Spring so Popular?

The rainbow colors of the spring have been wowing humans for centuries. When the spring was first officially recorded and named by the Hayden Expedition in 1871, expedition leader Ferdinand Hayden described the spring as a marvel:

“Nothing ever conceived by human art could equal the peculiar vividness and delicacy of color of these remarkable prismatic springs. Life becomes a privilege and a blessing after one has seen and thoroughly felt these incomparable types of nature’s cunning skill.”

In addition to the dramatic scenery provided by the spring, it’s also a significant geographical landmark. At 300 feet in diameter and 121 feet deep, the spring expels 560 gallons of water per minute (via Lunar and Planetary Institute).

How Does the Grand Prismatic Spring get its Colors? 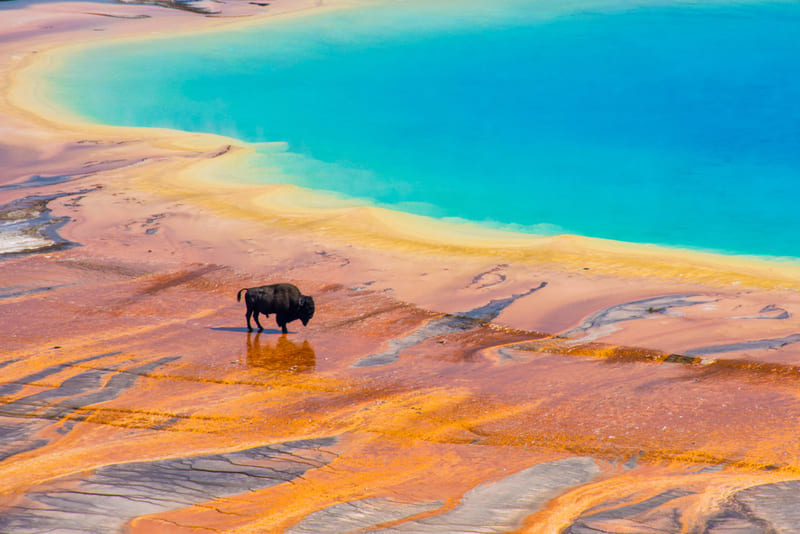 So what exactly gives the Grand Prismatic Spring its enchanting colors? Smithsonian Magazine explains that the bacteria within the spring are to blame (or thank!).

Because water from hot springs is able to flow without being interrupted, it goes through a cycle of rising, cooling, and then falling before rising again. The result is that the spring features rings of differing water temperatures.

In the center of the hot spring, the water that bubbles up is extremely hot (around 189 degrees Fahrenheit) and it cools as it spreads out across the surface of the spring.

As each ring of the spring is at a different temperature, it’s able to sustain different kinds of bacteria, which consequently results in the spring having different colors.

Check out this video for an in-depth explanation of the kaleidoscope-causing bacteria in the Grand Prismatic Spring.

The History of the Grand Prismatic Spring 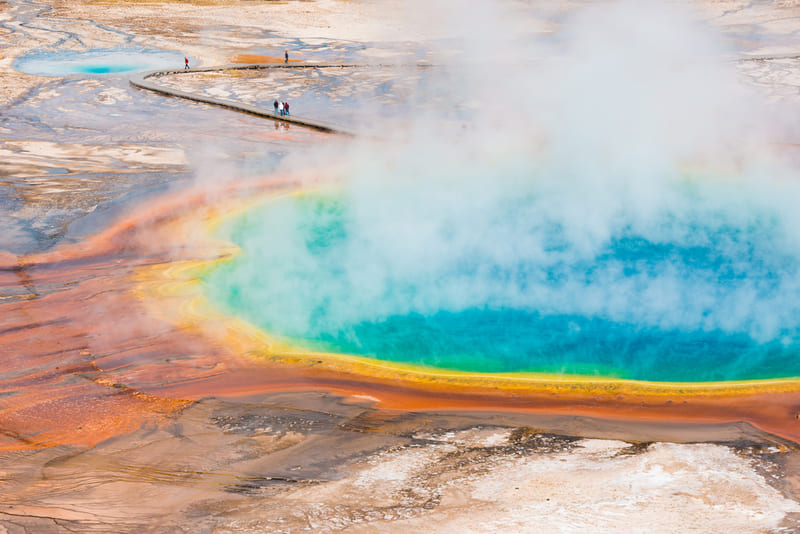 The first reports of the Grand Prismatic Spring came from European explorers in the early 19th century (via Full Suitcase). Fur trappers who crossed the Midway Geyser Basin in 1839 chronicled a “boiling lake”, and this matched earlier reports of a “colorful spring”.

In 1870, the year before the Hayden Expedition officially named the spring, the Washburn-Langford-Doane Expedition visited the spring and noted a 50-foot geyser nearby, which was later named Excelsior.

Since 1890, at least 20 people have lost their lives from injuries related to Yellowstone’s hot springs (via Yellowstone Park).

In 2020, a three-year-old boy was severely burned after falling into one of the smaller springs near Grand Prismatic Spring (via Today). The child ran off the marked trail and then slipped and fell into the boiling water, which resulted in second-degree burns. He was later treated at the Burn Center at the Eastern Idaho Regional Medical Center.

What to Know Before you go to the Grand Prismatic Spring

When is the Grand Prismatic Spring Open?

The roads leading to the Midway Geyser Basin are open from May through October, weather permitting.

Snowfall causes the roads to close over the winter season. If you visit the spring in cooler weather, either in May or September, there will be more mist on the water which may disturb the famous colors.

Getting to the Grand Prismatic Spring 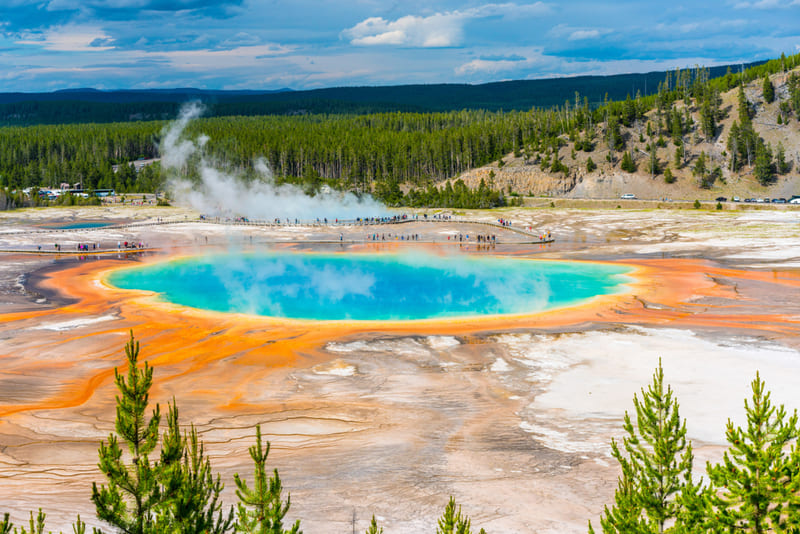 Additionally, staying in West Yellowstone is ideal for this attraction (and likely to be cheaper) as it’s only a short distance away.

There is a parking lot at the Grand Prismatic Spring, but it’s not large enough to accommodate the throngs of visitors who arrive every day. For your best chance of getting a park, arrive before 8 a.m. However, keep in mind that there will be mist over the spring at this time, which will ruin your chance of seeing the famous rainbow colors.

You can access the trailhead to the overlook from the Fairy Falls parking lot. The trail extends for .8 miles one way and crosses the Firehole River before climbing up to the viewing platform.

It’s an easy to moderate climb and should take between 30 and 40 minutes.

Safety should be the first priority when visiting the Grand Prismatic Spring. Although fatalities and injuries are extremely rare, it’s easy to end up in trouble.

Yellowstone National Park warns that, despite looking beautiful, the waters in the spring are “as acidic as the liquid in your car battery and hot enough to blister your skin.” There have been more people injured and killed by hot springs than any other feature in Yellowstone, including animal attacks.

The Midway Geyser Basin contains a boardwalk that will take you to adequate viewing points of Grand Prismatic Spring, and it’s illegal to step off the boardwalk. In addition to protecting visitors from the deadly waters and surface of the spring, the boardwalk also protects the fragile environment.

Though the soaring temperatures of the spring pose the greatest threat, it’s also important to be on the lookout for any animals in the area and act accordingly. Bears and buffalo do occasionally traverse the basin. If you see any wildlife, keep at least 25 yards away. A minimum of 100 yards should be kept from bears and wolves.

The use of drones is also prohibited in the Midway Geyser Basin.

Other Hot Springs in the Area

Grand Prismatic Spring is the starring attraction of the Midway Geyser Basin, but there are also other geothermal features nearby that are worth seeing. And the good news is you can see them by following the boardwalk loop.

These include Opal Pool, which is a geyser that erupts multiple times per year, Turquoise Pool, and Excelsior Geyser.

Mistakes to Avoid at the Grand Prismatic Spring

Venturing off the Boardwalk

It can’t be stressed enough how important it is to stay on the marked boardwalk. Falling into the spring could be lethal or result in life-changing injuries. And at best, entering prohibited areas can attract hefty fines, park bans, and jail time.

Missing the View from the Higher Ground

There’s no denying the exciting appeal of seeing the Grand Prismatic Spring from ground level. But the panoramic view offered at the overlook has often been described as mesmerizing.

If your schedule allows it, view the spring from both points. After all, it’s one of the most famous sights in America.

Both the boardwalk and the trail to the overlook can get slippery in the winter months. It’s crucial to wear secure footwear to reduce your chance of slipping. Keep in mind that there aren’t always handrails over the boardwalks.

It’s also important to secure all items and personal belongings. Any foreign objects that fall into the hydrothermal area, including cash, hats, and gloves, can disturb the organisms living in the spring.

It’s easy to see why the Grand Prismatic Spring is one of the most famous attractions in Yellowstone National Park.

Spring is one of nature’s greatest gifts and has been leaving humans in awe for nearly 200 years. Visiting the spring is a must for any Yellowstone itinerary, and it’s crucial to stick to the boardwalk and follow the park’s official safety rules at all times.

Have you ever been to the Grand Prismatic Spring? Let us know in the comments below!