Kootenai Falls is located in the Kootenai National Forest near Libby. This is the region of Montana’s scenic Lincoln County, and the falls are administered by the USDA Forest Service in an area where some of the most picturesque adventures await.

Kootenai Falls is impressive in that it comprises a wide and powerful series of waterfalls and rapids on the Kootenai River. The overall height of the drops is approximately 90 feet.

The falls also happen to be one of the largest free-flowing waterfalls in the north-western region, and the whole surrounding area is wild and stunning. The falls come with a rich history that was cemented when it became the setting of the 1994 movie “River Wild”.

The falls also exist within the sacred lands of the Kootenai Tribe whose ancestors hailed from the region. Reportedly the tribe views the site of the falls as the center of the world, and senior tribal members are known to gather here to communicate with the spiritual forces for direction.

History of the Kootenai Falls 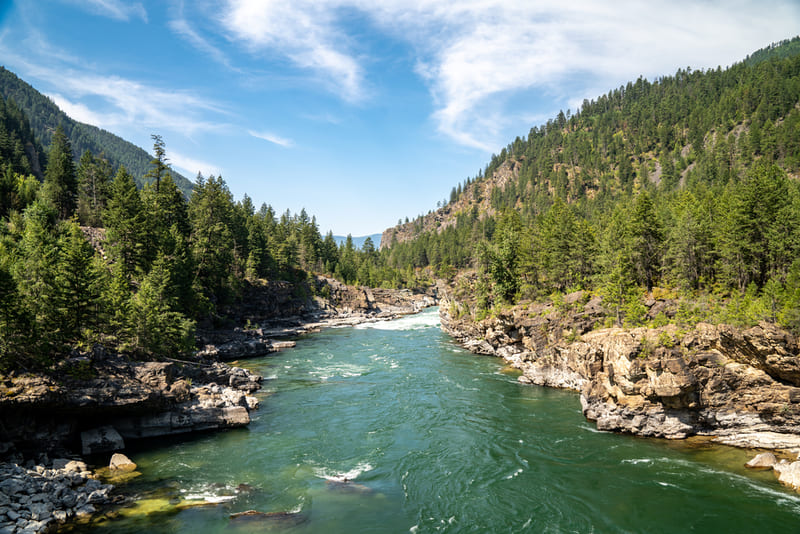 There are records of a Canadian explorer known as David Thompson, an employee of the Northwest Company, traveling into the Kootenai River area in the 1800s.

Apparently, he relied on the Kootenai River to help navigate his way through the area, helped largely by the Naitve American Indian game trails.

He managed to portage his way around the falls and again was helped with his navigations by following piles of rocks marking the trail that had been built by the Kootenai Indians.

The Formation of the Kootenai Falls 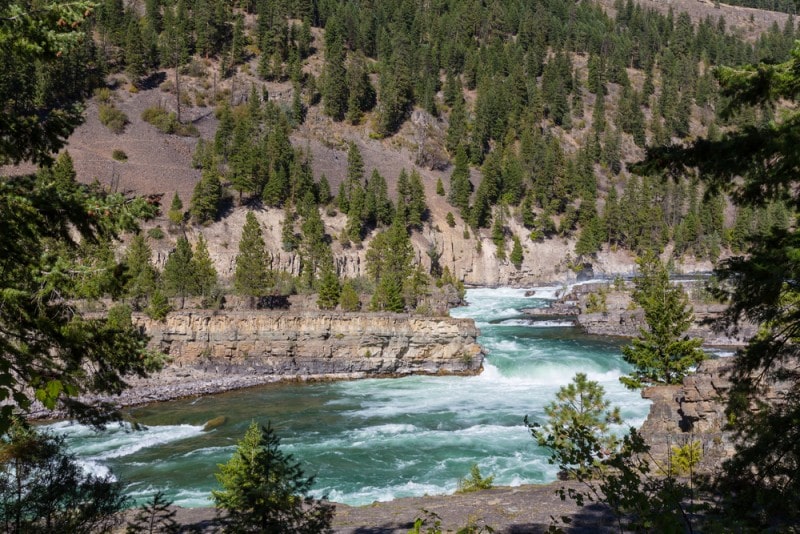 One popular theory of the falls’ formation is that they exist as a result of the Kootenai River entering a canyon and flowing over it. Others believe a more complex process involving a succession of phenomena would more likely have occurred.

Bear with us for a moment as we consider a more scientific theory that this process would have first involved the formation of the underlying layer of crust. This came about as a result of the deposition of various materials from when the area was an ancient sea floor.

Tectonic forces then came into play causing a folding type of action which caused the crust to become compressed up against a different tectonic plate heading in another direction.

The Kootenai River would have then apparently exposed the hard rocks of this crust as well as the tectonic folds and faults. Hence the “steps” over which the river flowed resulted in the waterfalls and cascades of the Kootenai Falls that we see today.

Getting to the Kootenai Falls 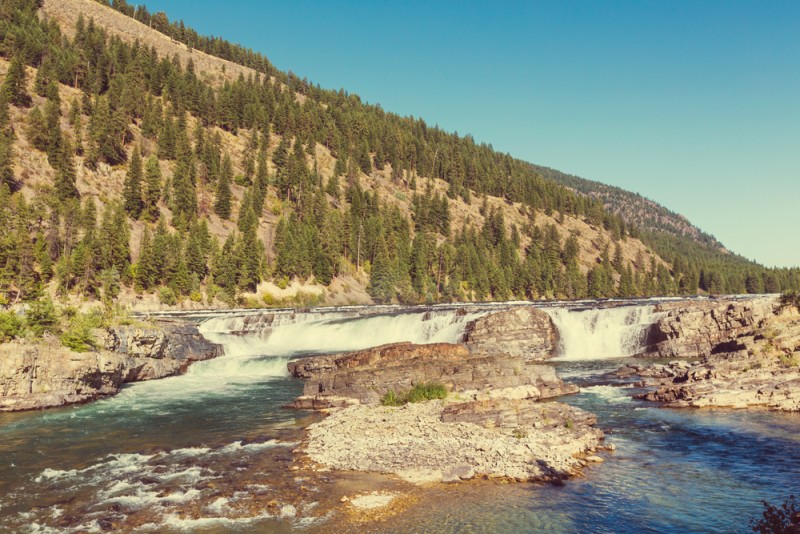 The trail to the falls is a relatively easy 0.8-mile route. It leads along a reasonably well-known back trail near Troy, with the dirt trail cutting through the forest and allowing hikers glimpses of the river.

This short walk is easily-achievable for any skill or fitness level, so don’t expect to bump into too many pro-hikers. There are also plenty of benches and boulders along the trail if you want to stop for a breather or simply enjoy the views and take some snaps.

From the spacious parking lot and trailhead right off US Highway 2, you can get onto a paved walkway for the first 0.1 miles of the route.

It then leads through a forested setting to a slightly obstructed overlook before descending to a railway bridge and then a series of steps. The steps become somewhat narrower as they wind down to a dirt trail.

There is a sign posted at the trail junction around a quarter-mile from the trailhead where you might want to keep right and head in the upstream direction. This takes you right up to the overlook of the main part of the Kootenai Falls.

There are various other well-used trails that also lead to alternate views of the main falls. They also feature views of more falls and cascades further downstream. The main section of the falls features a pair of rather wide segments where some of the drops are around 30 feet across a width closer to 200 feet.

Once you’ve had your fill of views from this spot you basically return to the main trail and head back past the trail junction. Most hikers continue on for another quarter-mile towards another of the area’s popular attractions—the Swinging Bridge.

You may choose to head back from this point but many people cross the bridge to get to a small beach-type area along the river shore a tad further upstream. You can also check out the fossilized stromatolites close to the southern end of the suspension bridge.

It’s also worth noting that there is a scenic picnic area situated in a grove of trees near the parking lot at the trailhead. This is a fully-equipped picnic site including picnic tables, barbecue areas, and restroom facilities.

You’ll also find a concession service open from May to September here that sells food and souvenirs along with providing guidance on the falls for visitors.

The picnic area is a great spot for lunch, but many more people seem interested in the Kootenai Falls Swinging Bridge.

The bridge stretches across the rushing river at thirty-five feet above it. Apparently, a prior bridge to this was actually washed away by the flow in 1948. The Swinging Bridge became its replacement in 1950.

The newer bridge was built much higher and featured various other upgrades and add-ons like the solid concrete foundations used for the stair towers.

While crossing the swinging bridge may not be for everyone, the bridge is certainly an ideal place to get some top Instagram shots. Be sure to bring your camera whether you cross the bridge or not!

The Kootenai Falls and their surrounding environment are located in an area with the kind of scenery that amazes even seasoned visitors to the state.

Natural wonders like the unique Kootenai Falls are the reason visitors are drawn back to Montana time and again. If you are a lover of waterfalls and other stunning natural geographic features, these falls are a must-see.

If you are an outdoor type you’ll undoubtedly find the entire region around the falls to be some of the state’s most impressive terrain that is well worth checking out.