The Montana State Capitol Building stands as a grand structure looking out across Helena. The building is listed in the National Register of Historic Places and is open to the public, although guided tours are few and far between.

There are various clues as to the origin and development of the state from outside the building, most notably the flag plaza. This area contains the flags of a number of Indian nations in a nod towards their contributions to the state and the nation.

An impressive-looking rotunda towers over the Capitol Building, which really needs to be viewed from both the inside and out before its full measure can be comprehended or appreciated.

A brochure is available for visitors who enter the building, and this helps to elucidate nicely on the history of the building along with much of its vast quantity of art installations.

The indoor architecture and design of the building are as impressive as they are outside, a fact immediately apparent from the tiled floors, stained glass, and other features that add to the grandeur of the building.

Many visitors both old and new say that a self-guided tour of the Montana State Capitol Building is an absolute must-do when visiting Helena.

A Guide to the Montana State Capitol Building

Here is the chance to step back in time and experience the sheer elegance of this government building which still operates its affairs amidst the beautifully-maintained art and historical elements. 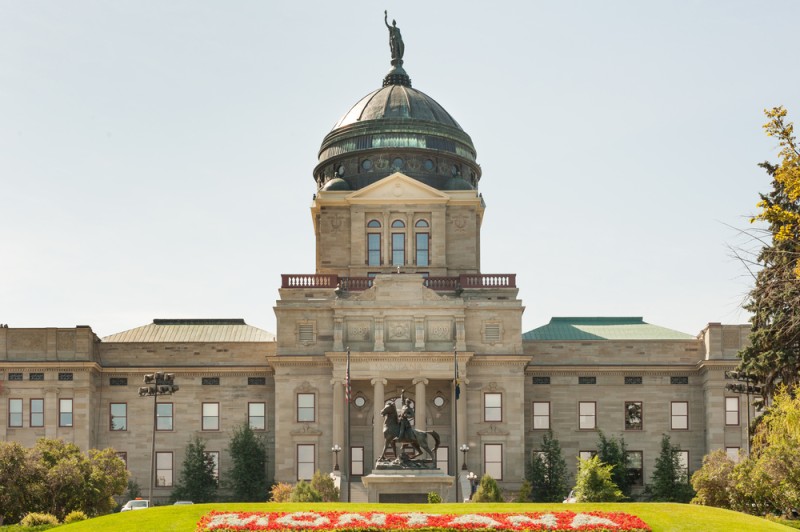 The History of the Montana State Capitol

In 1892 Helena won the run-off elections and became elected as Montana’s permanent state capital. Not long after this, the Fourth Legislative Assembly gathered to authorize the formation of a five-member Capitol Commission, whose responsibility lay with the design and construction of a Capitol building.

This grand new building reached completion in 1895 and was opened amidst much fanfare and ceremony, although some of the commissioners were removed soon after amidst allegations of corruption.

In 1898 the Capitol Building’s cornerstone was laid on the Fourth of July, and ongoing work on the interior included the recruitment of interior art designers F. Pedretti & Sons.

The Northern Pacific Railroad Company’s arrival in the area had contributed to significant development, and in 1902 the company presented the state with a gift: Amédée Joullin’s ‘Driving of the Golden Spike’. The famed mural was installed inside the building’s arch at the end of the Grand Stairway and its barrel vault.

A bronze plaque honoring veterans of the Spanish-American War was installed in 1903, and a year later the Thomas Francis Meagher monument appeared on the north lawn of the building. Not long after that, a new Legislative Assembly decided to authorize the construction of additional east and west wings to the Capitol building.

Three famous Montana artists were recruited to paint murals in the new wings—namely the Law Library, and the House of Representatives Lobby and Chamber. The artists were Charles M. Russell, Ralph E. Decamp, and Edgar S. Paxson, and the work was as good as completed by 1911.

It was soon after decided to construct an additional annex for use by the State Board of Health, and between 1925 and 1930 various other plaques, paintings, sculptures, and other artwork were installed in the Rotunda.

In the early 1930s certain renovation work already needed to be carried out on the Capitol building, and by 1947 the later addition of the north entrance on the Capitol’s first floor had been constructed.

Various firms were also asked to consider possible modernization plans for the building not long after this, with two stages of modernization being planned. Throughout the next few years, more changes would take place in the building including the removal of the Grand Stairway’s stained-glass barrel vault to accommodate the placement of a new fourth-floor hearing room.

Around this time Joullin’s ‘Driving the Gold Spike’ piece was relocated to the Rotunda’s west wall. Throughout the subsequent decades, various busts and life-sized statues of former Senators and other prominent political figures were installed in the Rotunda, and the first interior restoration work was begun.

Other Points of Interest in the Capital 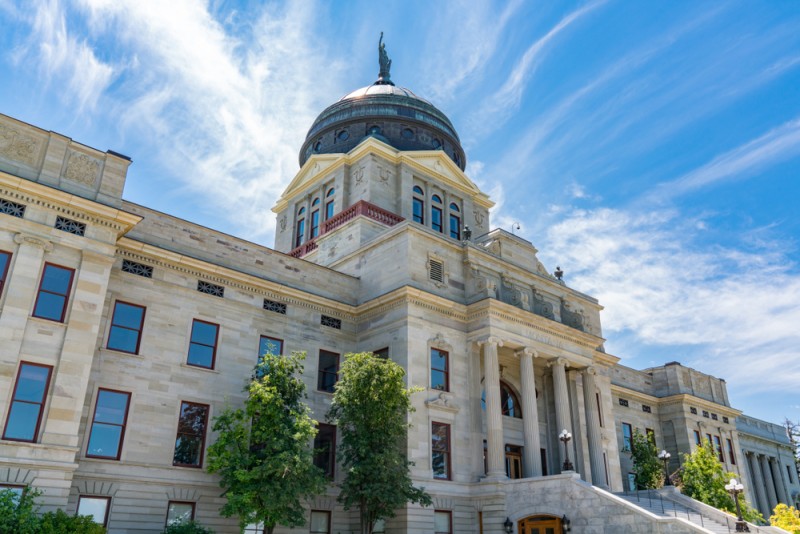 Anyone touring the elegant and immaculate hallways, open spaces, staircases, and chambers will be privy to multitudes of informational plaques, art pieces, and other impressive decorative and architectural features of the building both indoors and out as they wander.

The grounds are almost understated and complement the amazing Capitol Building itself, which seems an appropriate and grand structure representative of the capital of the Treasure State. There is a flower garden in front of the grounds shaped like the state of Montana that adds a unique touch.

Inside the House of Representatives Chamber, there is what could be the largest mural ever painted by renowned Montana artist Charles M. Russell.

The mural depicts Lewis and Clark at Ross Hole, and just outside the House chamber are several familiar-looking Paxson paintings. On top of that, the Montana History Hall of Fame features busts of recent prominent local personages.

Tours of the State Capitol

There are no on-demand guided tours available to the general public, but anyone is welcome to just walk around the building and check out the various different aspects of its artwork, architecture, and exhibits.

The State of Montana welcomes visitors to the Capitol and supports the informational and educational value of the visits.

Self-guided tours are encouraged and lead you through the Hall of Governors and the super-elegant Governor’s Reception Room on the second floor’s east wing unless it happens to be in use.

A self-guided tour brochure is available to visitors and it helps to explain the art and architecture in and around the Capitol, including the especially attractive rotunda.

The Legislative Services of the Capitol Building division does offer guided tours in June, July, and August, and these are typically held at 10:00 a.m. and 1:00 p.m., Monday – Friday. The tours start at the information desk on the first floor, where self-guiding tour booklets and a scavenger hunt for kids are also available.

The building is open for both operations and visits from Monday to Friday between 7:00 a.m. and 6:00 p.m. The building is also open Saturdays, Sundays, and most holidays between 9:00 a.m. and 3:00 p.m. although you can expect it to be closed on holidays like Thanksgiving, Christmas Day, and New Year’s Day.

The “People’s House,” as it is locally known, is one of Montana’s grandest public spaces and constructions.

To this day the state Capitol Building stands as an impressive example of the high-end, elegant public architecture that features in this and other buildings like it. The gentle rise overlooking the Helena Valley only enhances the grand and stately character of this unique building.