Montana’s Hyalite Canyon is a mountain valley creation that comprises sections of the Gallatin National Forest. This visually stunning recreation area is situated between Gallatin Canyon and the impossibly scenic Paradise Valley, just to the south of Bozeman.

Hyalite Canyon came to be throughout the 1940s and has long been a focal point of recreation in the area. It continues to attract both locals and visitors who come primarily for exceptional year-round recreational opportunities.

In this article, we will look at the various activities around the Hyalite Canyon area as well as the history of the region.

The reservoir actually services Bozeman’s drinking water requirements as well as the Gallatin Valley irrigation needs, and the entire Hyalite Recreational Area is surrounded by mountain peaks as high as 10,000 feet, with networks of creeks, streams, lakes, waterfalls, and trails running through them. This really is a Montana recreational area that has it all. 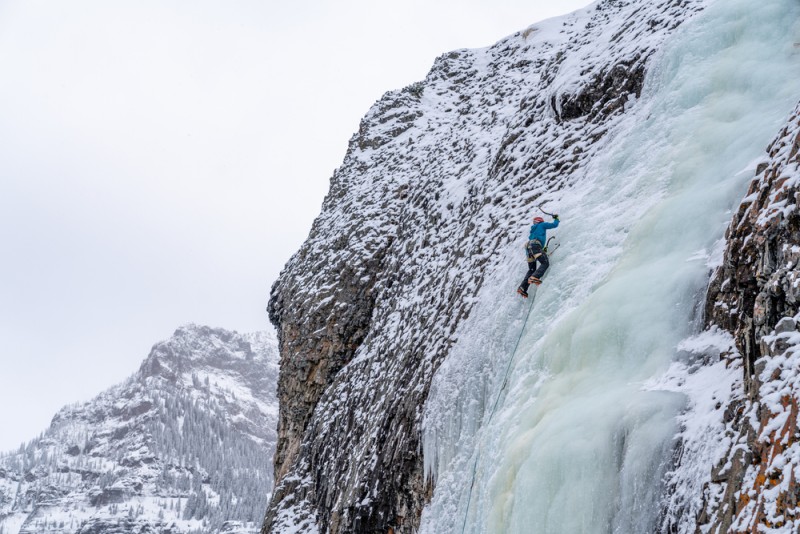 The Main Features of the Hyalite Canyon Area

For the majority of visitors to the Hyalite region, the main attractions are likely to be recreational, particularly hiking and biking although there are also plenty of other options.

This has long been the go-to place for locals to get a mountain fix, especially since motorised recreation has been restricted in favour of more natural pursuits and wildlife conservation.

Hyalite has got wildlife too including wolves, grizzly bears, mountain goats, bighorn sheep, moose, and coyotes.

Then there is the Hyalite Peak Trail, which starts out at elevations of 7,000 feet and has various waterfalls along the way which provide some decent rest stops.

Some of the other notable and popular trails include the 3.3-mile Blackmore Lake Trail, the 2.4-mile History Rock Trail, the Emerald and Heather Lakes Trails, and the 6.5-mile trail to Hyalite Lake. It is worth noting that snow is fairly common on the trails until around mid-July.

Not surprisingly mountain biking enthusiasts will be privy to some great rides including the History Rock Trail into South Cottonwood Canyon.

Another popular route is the East Fork trail to Emerald Lake while the West Shore Trail along Hyalite Reservoir is a much easier option for anyone who wants something a bit lighter.

Early summer sees the reservoir virtually full to the brim and boaters seeking still water will begin to appear. There’ll be a few paddle-boarders out there with canoes and kayaks.

Fishing is reportedly great year-round, and winter brings in the ice fishermen looking for some of the more remote backcountry lakes. Anglers can enjoy fishing year-round for brook trout, yellow cutthroat, and arctic graylings in the reservoir, and ice has usually formed by late November.

Scuba diving classes frequently come to the reservoir to sharpen their skills before heading out to the ocean where they will undertake certification.

This entails the hardy scuba divers training in the unremittingly chilly depths of the snowmelt-fed water where visibility is somewhere in the range of zero to 10 feet on average, according somewhat to the depth.

The Hyalite Peak Trail is surrounded by high peaks and steep ridges renowned for ice-climbing. The frozen waterfalls along the route add further options for adventure-seeking climbers which all makes Hyalite a renowned ice climbing destination in Montana.

Quality climbing rock is somewhat limited in Hyalite but the dedicated will soon be seeking out the finer routes. When winter finally hits, the climbing opportunities increase from humble flows to multi-pitch ice rock epics which is what makes the area so attractive to climbers.

The campgrounds along Hyalite Creek facilitate some excellent wildlife viewing and fishing amidst towering rocky peaks, and they serve as great starting points for numerous short and long hiking routes into the dense forests and up to alpine meadows on the surrounding peaks.

Hyalite Canyon contains three campgrounds: The Hood Creek Campground, the Chisholm Campground, and Langohr Campground. All of these facilities contain drinking water and other amenities such as vault toilets, fire rings, picnic tables, and a trash collection service.

Trail grooming in the region has become more and more commonplace every winter. This has resulted in the fact that there are now plenty of quality Nordic Ski Trails to keep enthusiasts coming back every time the snow hits.

The History of Hyalite Canyon 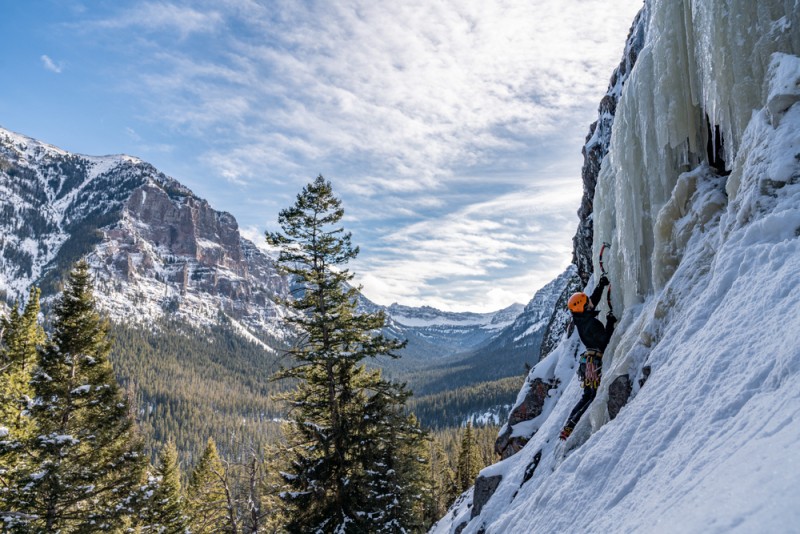 Closely located to Bozeman, the area that now qualifies as Hyalite has long been regarded as an area for outdoor gathering and respite.

The earliest recorded account of the area came from a geological survey by the Hayden Geological Survey team from the early 1800s. The expedition group surveyed the area, noting the picturesque landscape as well as the presence of the colourless opal stone known as Hyalite.

Around the time of 1890, a wealthy former miner known as Colonel Chisholm bought a home located in the region (which still exists and is now known as the Voss Inn Bed and Breakfast).

The beauty of the canyon was not lost on the Colonel, who had discovered it in the early 1900s and returned there to build a summer cabin. This cabin turned out to be quite elaborate for its time, and it exists to this day located just south of the present-day Hyalite Youth Camp.

The Colonel and his family started and continued to develop an area around the cabin, mainly for campers. It soon turned into a popular location where various get-togethers occurred, many centred around the piano that had somehow found its way up to the main cabin.

This area became known as the Chisholm Camp and it started to grow in both reputation and size although getting there was a task within itself as the former logging road had seen no improvements since local mill closures.

Faculties from the Montana State College had started heading up to Hyalite Creek by car in the early 1930s, and snow surveys in the meadow and five miles farther up the canyon were being carried out, which supplied reliable information regarding the water supply for each year.

More sleeping cabins and officer’s quarters were added in the late 30s and early 40s, and road improvements continued at the same time as planned construction with the development of a lake.

This came to light after a group of farmers had petitioned the State Water Conservation Board for a study of the possibility of a dam on Hyalite Creek for irrigation purposes in the late 30s.

This was ultimately approved, although construction did not actually get underway until 1940 for one reason or another and the dam was finished in December 1950.

The Hyalite Dam ultimately created the 200-acre Hyalite Reservoir which today forms a focal point in the area. 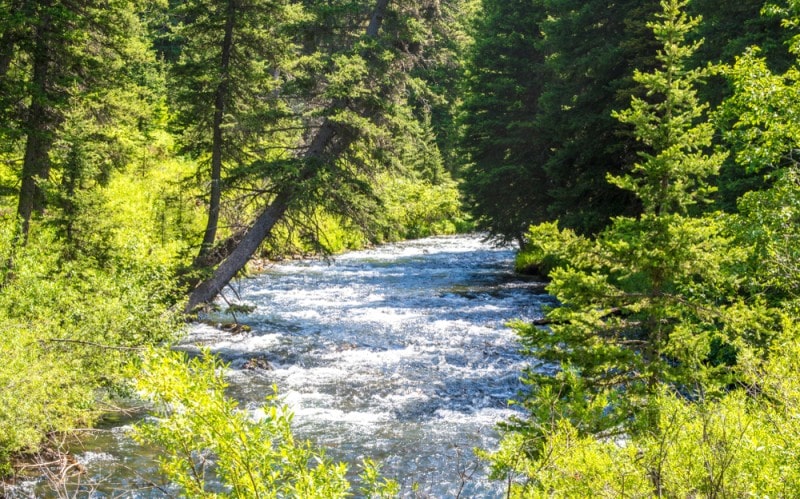 Hyalite Canyon is located 15 miles and about 30 minutes south of Bozeman off South 19th Avenue.

To get to the main section of the canyon from Bozeman by car you should head south 6 miles before turning onto Hyalite Canyon Road. You will see the sign marking the entrance to Hyalite Canyon. Follow this sign for 19 miles in all.

No matter what kind of outdoor recreational experience interests you, there’s more than a good chance that you’ll find it at Hyalite Canyon Recreation Area.

There are indeed good reasons why this particular spot is one of the most heavily-used recreation areas in the state with its three campgrounds and two day-use areas.

The lack of motorised vehicles in the area along with the reservoir’s ‘no-wake rule make canoeing and fishing a real pleasure in what seems like the heart of nature but is in fact an area just 15 miles south of civilisation by way of Bozeman.