Leigh Lake is located in Montana’s north-western Glacier Country near Libby. It sits in what is the largest section of the Cabinet Mountains Wilderness Area in the Kootenai National Forest.

The lake has been described as one of the most unique in the world with its super-clear waters it is only accessible on foot which makes it a highly popular destination for hikers as well as anyone else who can handle the mile-and-a-half uphill trail.

The lake is surrounded by the huge peaks of the Cabinet Mountains and sits at elevations of more than 5,000 feet. Most of the lake’s incoming water comes from precipitation and mountain snowmelt—of which there is much due to typically high levels of snowfall.

No one seems entirely sure about the depth of the lake—including the locals–and there are no officially recorded figures as such, so it’s anyone’s guess how deep it is exactly although there are estimates of 200-feet-plus. Leigh Creek, the source of which is the lake, is also the main outflow point.

Blackwell Glacier rises overhead on Snowshoe Peak and some of the ice that flows down from it can usually still be floating in the lake as late as July.

Of course, this only adds to the scenic nature of the lake, especially with the craggy face of Snowshoe Peak as a backdrop. On top of that, you have the fact that the lake lies within the alpine setting of the protected wilderness area.

There are no campgrounds, facilities, or lodgings in the vicinity of Leigh Lake, except for maybe just a few primitive camping set-ups outside of the designated distance away from the shore.

Fishing is not huge at the lake, and bizarrely you won’t see too many boats out there either due to the prohibition of motorized vehicles and thus the challenge of getting them to the shore.

Most explorers coming to Leigh Lake do so primarily for the hiking opportunities, which are plentiful and varied.

Plenty of explorers head to the lake intent on scaling Snowshoe Peak which towers 3,000 feet above and can be accessed via a trail near the lake outlet.

The town of Libby is 13 miles from the lake and is a popular stop-off for anyone visiting the lake—or vice versa. There are various attractions in Libby that people come for aside from the obviously excellent and scenic outdoor recreation in the area.

The annual Libby Logger Days Festival celebrating Libby’s past as a logging center is one example, as is the annual Riverfront Blues Festival, and Libby Heritage Museum is home to all aspects of the region’s history.

Leigh Lake is located about 200 miles from Missoula, less than 100 miles from Kalispell, and from Libby you should take HWY 2 heading south towards Glacier National Park. Turn right at Bear Creek Road about eight miles later, then after 3 miles turn right again onto Leigh Creek Road (FR 4786).

This road is single-lane and somewhat grave but it will take you up to the lake after about two miles. 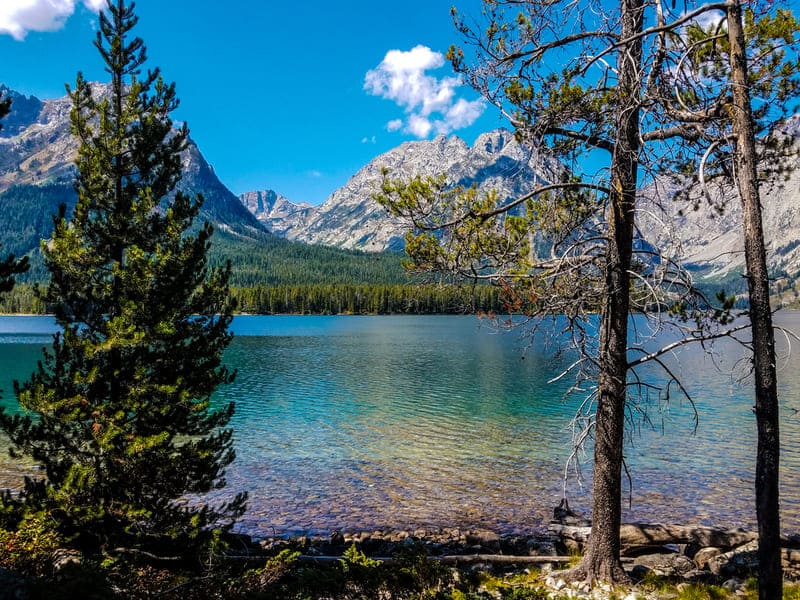 Things to do at Leigh Lake

You might try some fishing or you may be able to get a canoe to the lake. You can always try your hand at primitive camping, wildlife viewing, or birding, but there’s no denying the main attraction here is hiking.

Although the fishing at Leigh Lake is reported of poor quality, some of the fish species to be found here include bass, black bass bluegill, brook trout, cutthroat trout, largemouth bass, rainbow trout, and sunfish.

No one has yet claimed the fishing to be of any reasonable quality, and one of the reasons no one really expects it to be is the sparse weed cover.

It’s rare to see any boats out on the lake with people fishing due to the difficulty of getting them down to the lake. It’s true the occasional fisherman will hump a backpack with a float tube to the lake, giving himself a bit more chance with some of the trout in the waters.

This area of the Kootenai National Forest comes in for quite a bit more precipitation than other areas. It is thus abundant in plant life, and the scent of wildflowers permeates the mountain air.

Around the time of fall, which is usually in September at this altitude, you can witness the brilliant colors of the mountain maple, mountain ash, alders, and larch, with trees sporting some deep scarlet, red, brown, and golden yellow autumnal tones.

There is a variety of wildlife in and around the area, and this includes mountain goats, mountain sheep, deer, elk, bears, wolverine, birds like golden eagles, and many smaller mammals.

The trails are places where hikers commonly see mountain goats.

Primitive camping is the only type available near the lake and is only allowed if kept at least 300 feet back from the shoreline.

It is not that widespread largely due to any lack of amenities, but some hikers who’ve maybe taken on more than they had bargained for set up camp for the night, or anglers and fisherman stay on for a day or two to try their luck. 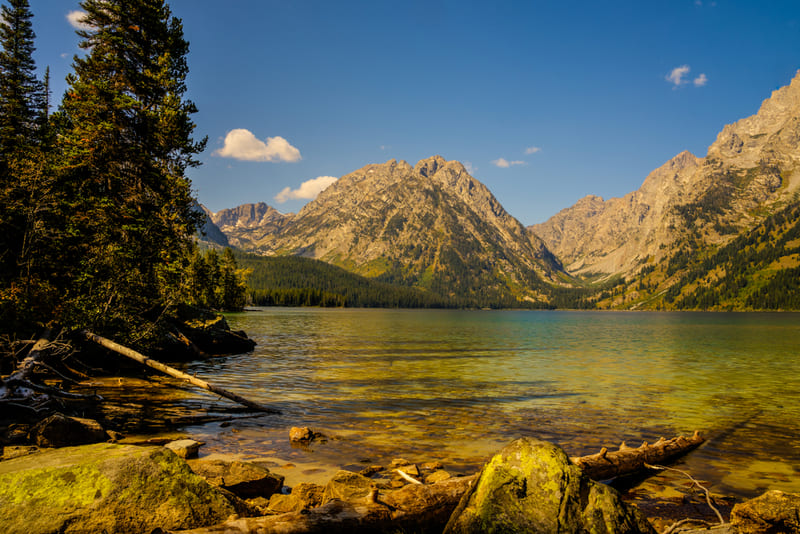 Leigh Lake is actually regarded as one of the main hikes throughout the region of the Cabinet Mountains Wilderness in western Montana.  T

hat’s partly because getting to the trailhead is possible on foot, and also due to the fact that the Leigh Lake Trail isn’t exactly that long.

The scenery is also another main attraction, but needless to say, it can sometimes get a little on the crowded side here at some times.

The thing that many willing visitors don’t account for is the gradient of the main trail which won’t suit anyone out for an easy stroll.

The Leigh Lake Trail is a 2.7-mile, out-and-back trail rated as difficult. The trail is used mainly for hiking, is best used between June and October, and dogs are allowed if kept on a leash.

The trail starts out at the Leigh Lake Trailhead, which can be found on the way into the lake area on Leigh Creek Road.

The hike takes about three hours for a round trip from the trailhead and is most accessible between May and October.

Only the most seasoned winter explorers attempt the trails around this area after the snow starts to fall, and with some of the trailheads often impossible to reach via car, they must snowshoe into the hiking trail.

The trail has plenty of inclines and some rocky areas at points, and you’ll also need to cross some streams a few times.

The Leigh Lake Trail route climbs rather steeply through the forest and enters the Cabinet Mountains Wilderness area just before the half-mile point. It soon starts to become noticeably steeper, climbing up through a boulder field at the 1-mile point where you should make sure to try and stay on the trail.

A little light scrambling may also be necessary at this point, which is not for everyone. At the mile 1.2-mile mark, the path leads along the bottom of the waterfall at the outlet of the lake, which gives hikers some amazing scenery to take in.

A few more light scrambles might be in order before descending the trail which leads through the brush to the lake. You might turn right here to go along the lakeshore, where you’ll get better views over Leigh Lake.

There are many who come to take on the challenge of scaling the highest point in the Cabinet Mountains of northwestern Montana.

Those who make it to the top get views of alpine peaks, glacial cirques, and not to mention the lakes of the Cabinet Mountains Wilderness with Blackwell Glacier to the north.

Ascending Snowshoe Peak is no mean feat from any direction, and for many, this route is less of a hike and more of a scramble and climb. Probably the best option is to take the hike from Leigh Lake.

This route is known as the Northeast Ridge Trail, and this 6.9-mile route is not necessarily the easiest way up because of its short approach from Leigh Lake.

You’ll encounter streams and waterfalls along this route, but due to its challenging nature some hikers seeking an easier (but longer) route can opt to come in from the western side.

You can get to the trail from Bear Creek Road, following it for 3 miles then take a right turn onto gravel Cherry Creek Road 867.

Continue along this road for 4 miles until you reach a junction with Leigh Creek Road 4786, where you take another right and continue for the last 2 miles to the trailhead for Leigh Lake Trail 132.