Geysers are the geological formed as a result of steam erupting through a vent on the land’s surface, some of the more well-known geysers across the state give off regular displays that draw visitors from around the world.

The old Montana town of Geyser in the Judith Basin rather unsurprisingly got its name from the mud geysers that are still prominent around the region.

And although geysers are dotted around various other areas of the state, it seems to have been universally agreed upon at some point in time that the ones worth seeing are all located in Yellowstone National Park. 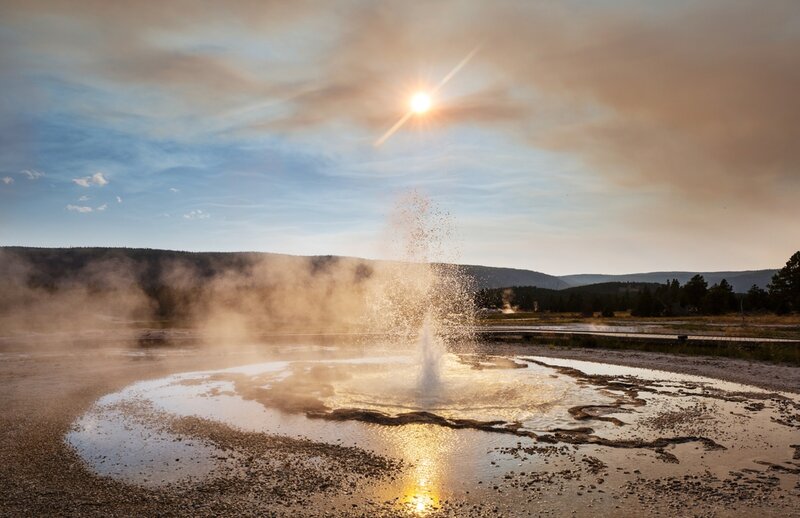 As it turns out Yellowstone National Park is the location of the largest field of active geysers across the globe. The park features many well-known geothermal features like hot springs as well as geysers of varying sizes and predictability.

Many of these Geysers have grand names characteristic of their eruptions—some are known to erupt hundreds of times every year with seeming regularity, while others may not demonstrate any activity for decades.

Yellowstone Park contains various Geyser Basins including the Upper, Midway, and Lower basins as well as the Norris Geyser Basin and the West Thumb Basin.

The Norris Basin contains the hottest temperatures to be found in any of the geothermal features within the park, and all the major geyser basins can be explored by way of the park’s boardwalks and a small network of paved trails.

In this article, we will take a closer look at nine of the best geysers in and around Montana and what you can expect when visiting them.

Nine Geysers in Montana and Wyoming 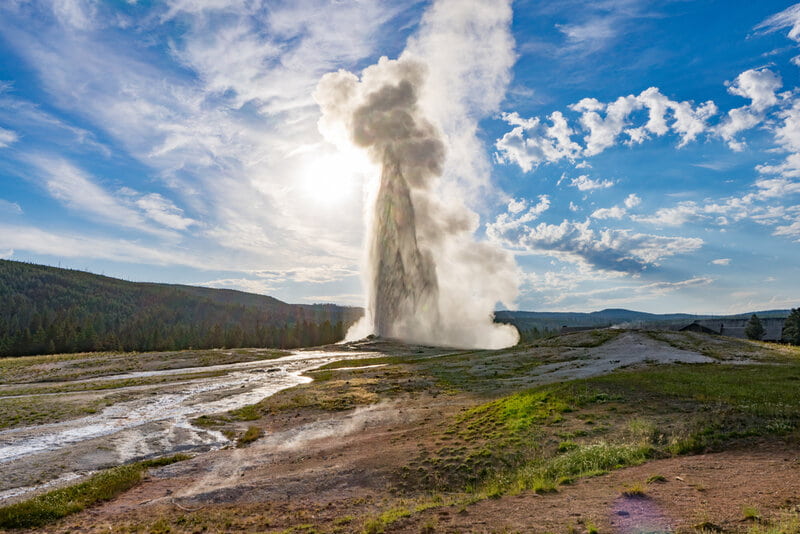 Old Faithful has got to be the one geyser that everyone knows if any. This phenomenal Montana geyser is 30 miles from the West Yellowstone entrance and has certainly been well-publicized over the years.

One of its main features and selling points for tourists is its predictability. In fact, Old Faithful is the most predictable of all the geysers dotted around the park.

Even the predictable geysers are inconsistent in other ways though, and various aspects like the height of the eruptions are constantly changing.

On top of that, there can be variations in the interval lengths between each eruption, and of course the length of it. The variances come from evolving and ever-changing underground processes.

There are generally two types of patterns followed by Old Faithful’s eruptions—short ones and longer ones. The former of the two typically lasts just one or two minutes, while the larger eruptions can go on for as long as five minutes. The average geyser’s average interval between eruptions is currently about 92 minutes.

First-time and close-up visitors are often amazed as they witness eruptions with heights somewhere between around 100 feet to 190 feet.

An umbrella might even come in handy when you consider this occurrence lets out something like 8.5 gallons of water per eruption. 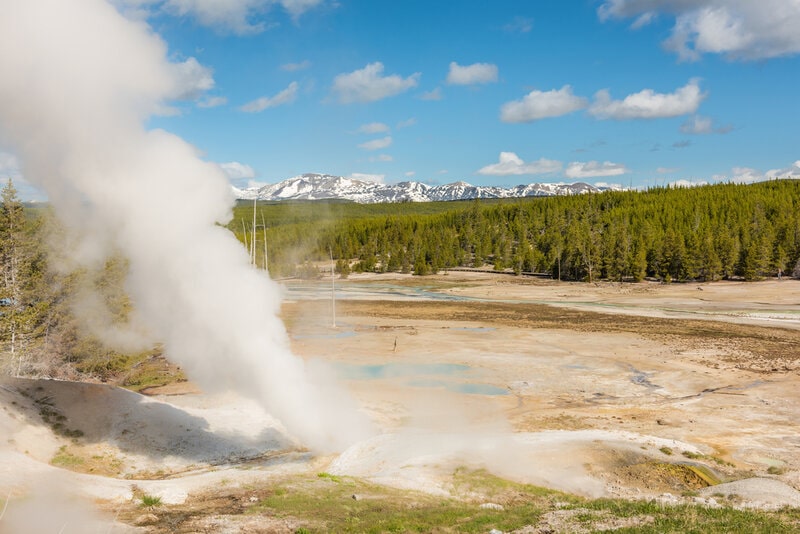 Steamboat Geyser is located within the Norris Geyser Basin, in a spot around 20 miles south of the equally-popular Mammoth Hot Springs.

Steamboat Geyser wasn’t exactly one of the best-performing geysers within the national park over the years. However, in recent years the geyser seems to have upped its game somewhat with an increase in eruptions.

And as it turns out the Steamboat is the world’s tallest geyser — which means you can expect quite a show when it does erupt. Water can be blasted as high as 300 feet in the air along with other materials like mud, sand, and silica.

The eruptions would have generally taken place every few years until 2018. Steamboat erupted 30 times in all, which was a record-breaking feat. 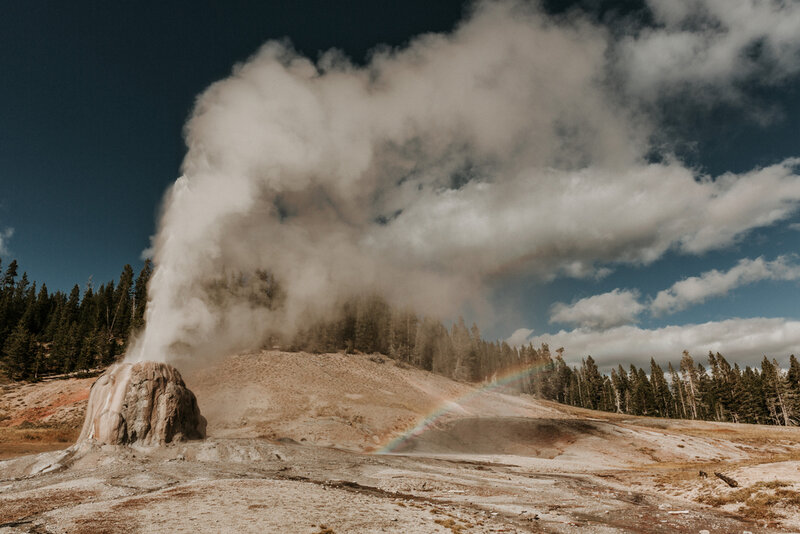 Lone Star Geyser is another one of the most well-known and popular Yellowstone geysers. Lone Star’s eruptions are impressive with their resplendent cone containing boiling water containing other dissolved materials and depositing them.

Lone Star Geyser actually had a fair few other names before its current one. The geyser was first discovered in the early 1870s by the Hayden Geological Survey, who subsequently named it the “Solitary Geyser”.

Something of a rethink apparently went on with the name in the 1880s after it was found that one Frank Jay Haynes had been selling stereographs of the feature with the “Lone Star” name on it since 1882. This contributed to the renaming and seemed to stick better than the previous one. 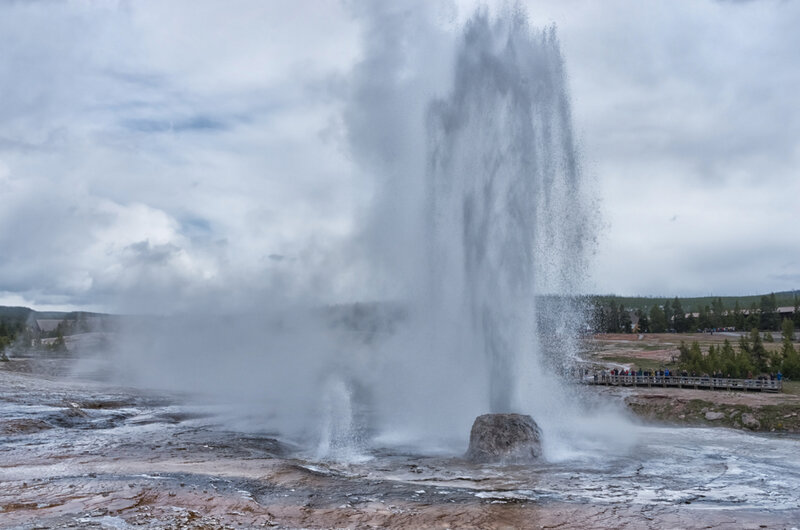 Beehive Geyser is another impressive performer and popular geyser in Yellowstone National Park. The geyser is not one of the most predictable or even active geysers within the park, and often it lies dormant for long periods.

When Beehive Geyser is active though, there is the likelihood of the odd magnificent show or two. Eruptions can occur a couple of times a day during these periods, often with durations of up to five minutes. The narrow cone has a nozzle-like effect and projects the water column to heights somewhere between 100 and 200 feet.

Beehive Geyser has another feature by way of a side channel that acts as an indicator. Rather predictably the name of this add-on is called Beehive’s Indicator. 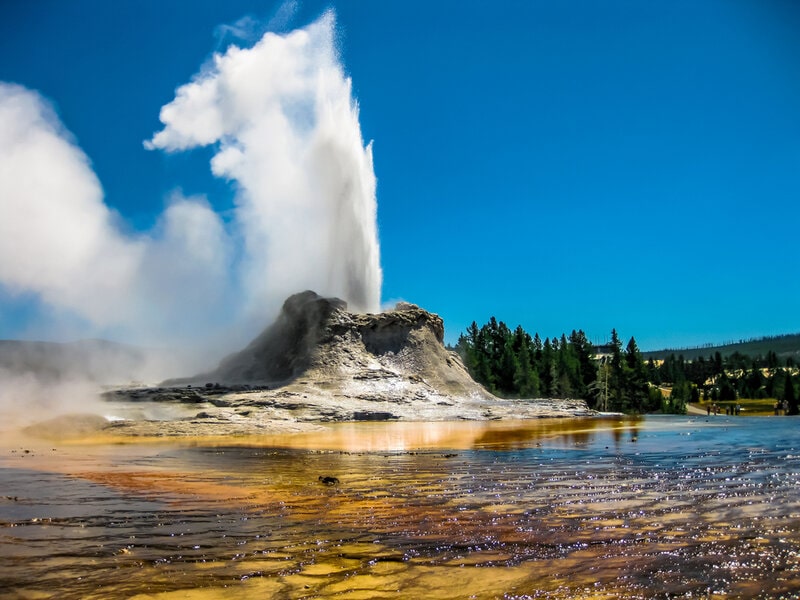 The magnificent Castle Geyser contains an impressive cone on one of the largest and oldest sinter formations existing today. The Geyser’s eruption patterns have changed quite a bit during the time of its recorded history.

These days Castle typically erupts about every 10 or 12 hours. The height of the jets of water can reach as much as 90 feet and lasts for close to 20 minutes. Following the water, fountain stage comes a noisy steam phase lasting another 30 or 40 minutes.

Castle Geyser has the largest cone of all the Geysers and is thought by many to be the oldest in the basin. Like most geysers, the eruption pattern of Castle has changed considerably during the time of its recorded history. 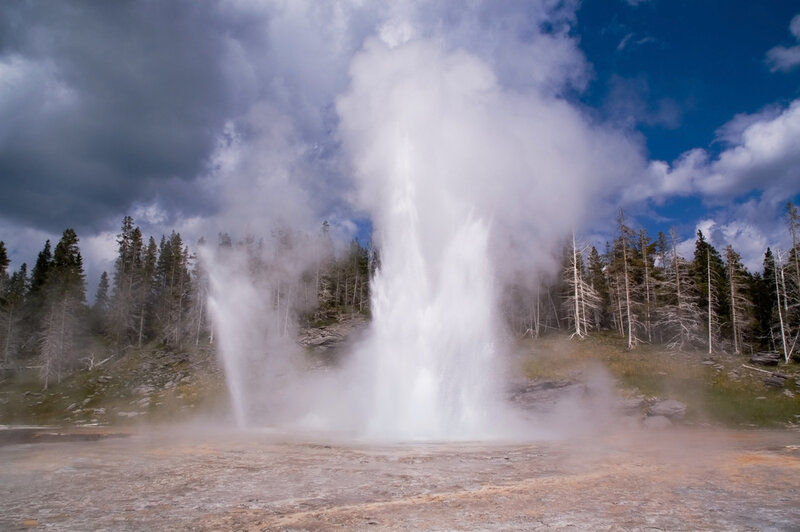 Not too far from the vicinity of Old Faithful in the Upper Geyser Basin is located the Grand Geyser. The name is fitting for anyone who has witnessed the powerful bursts as high as 200 –feet in the air of what is the tallest predictable Geyser in the world.

An eruption of this classic fountain geyser usually occurs every 7 to 15 hours. Grand Geyser erupts from a large pool with powerful bursts rather than a steady column, and an average eruption is typically somewhere in the region of 10 minutes and includes 1 to 4 bursts, with some of them reaching the maximum height. 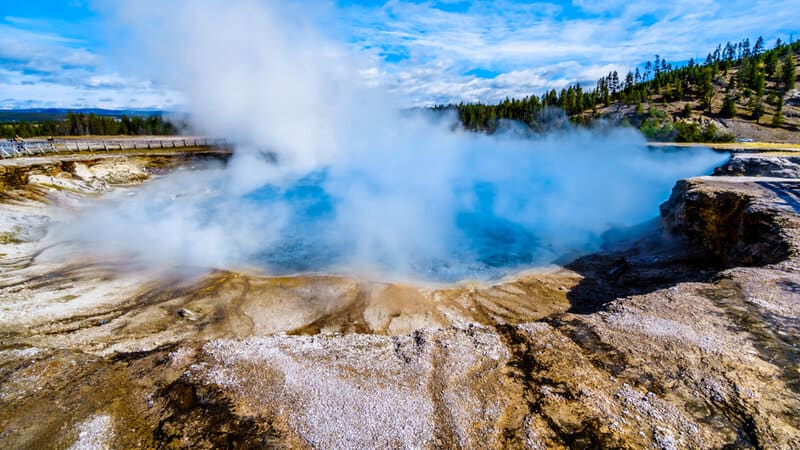 Excelsior Geyser Crater is another Yellowstone National Park feature, and it is located in a 200 x 300-foot crater. From here more than 4,000 gallons of water per minute is discharged into the Firehole River.

Excelsior’s most famous eruption was recorded on September 14, 1985, when the Geyser erupted to a height of 55 feet, with the entire spectacle lasting 46 hours.

The last known eruption of the Geyser occurred in 1988, and it is in the same basin as Yellowstone’s largest hot spring, Grand Prismatic Spring. 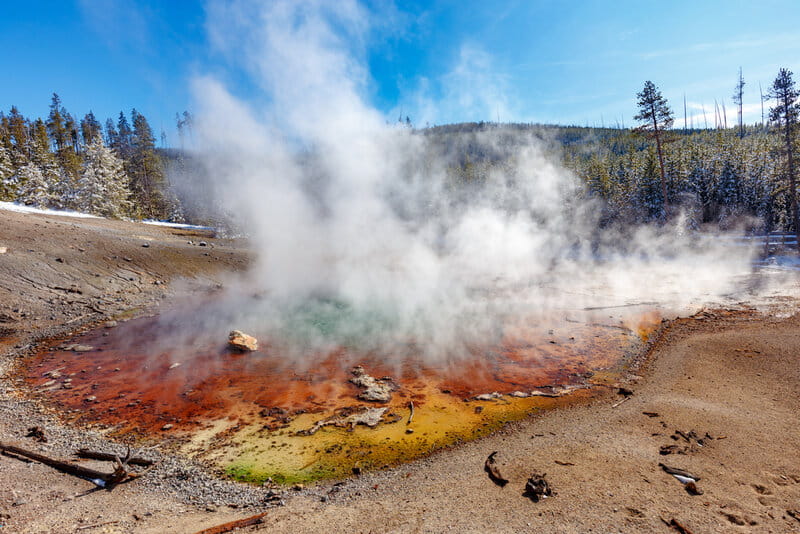 Echinus Geyser is the largest acid-water Geyser know and is reportedly named for the deposits that come from it looking like the spines of echinoderms like sea urchins. Echinus is another of Yellowstone’s crowd-pleasers and has been known to erupt somewhere between 30 minutes to 1.5 hours.

The Geyser altered its interval a couple of decades back though, and now only erupts a few times per day at best. The pool fills with water very gradually until jets of steam and water begin to explode 40 to 60 feet in the air.

The length of the eruptions is another thing that has changed with this Geyser and now they typically last for about 4 minutes, whereas in the past major eruptions lasted as long as 2 hours.

There has been no significant eruption in 3 years from Echinus, and in late 1998 Echinus’ performance took a serious dip as well as became more on the erratic side.

The waters of the Geyser are reportedly almost as acidic as vinegar, and acid-water geysers are in fact incredibly rare. Most of those on the entire planet is found at Norris Geyser Basin.

You can see a rare eruption of the geyser below: 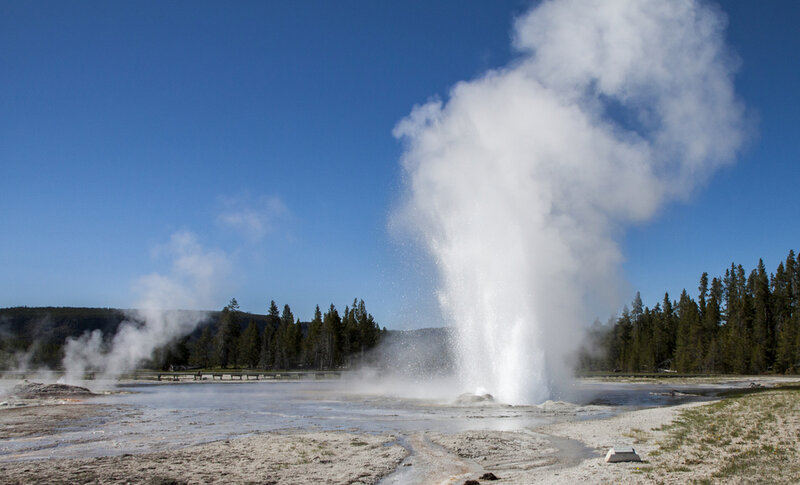 Daisy Geyser is a fountain-type Geyser and doesn’t disappoint when it does decide to erupt. Daisy is a predicted geyser in the national park, so it is easier to fit it into any tour schedule or itinerary while visiting the park.

The Geyser reportedly erupts up to heights of 75 feet, for as long as 4 minutes at a time. The intervals between the eruption are likely to vary but are somewhere in the region of 2-3 hours.

Eruption times in the park are predicted fairly accurately by using the average interval and the time of the last eruption.

The Daisy Geyser eruptions are usually done in less than 10 minutes but are a spectacle still worth witnessing. Daisy is usually quite predictable except during the eruptions of the other nearby Geyser known as Splendid. That said the Geyser has had little activity in the last couple of decades.