Carter County is a sparsely-populated region in the southeastern corner of Montana. The county originally formed part of Custer County but was created by an act of the Montana State Legislature in 1917.

Prior to that the land had been occupied by the Sioux Indians, and legend has it that the county seat, Ekalaka, got its name from a Sioux woman who married one of the first settlers in the region.

Ekalaka is best as the location of the Carter County Museum, a solid institution of natural and local history. The museum has a plethora of collections related to local history and the homesteading period but is also home to a prized dinosaur collection.

The prairie stretching from Ekalaka in all directions is a visually impressive combination of Montana terrain east of the mountains, which includes parts of the Custer National Forest. The sacred former hunting grounds and site of some unusual-looking rock formations, now known as Medicine Rocks State Park, is located 12 miles north of Ekalaka.

The other populated places in the somewhat remote county include the census-designated Alzada and the unincorporated communities of Boyes, Capitol, Hammond, Mill Iron, and Ridge. The entire population of Carter County is not much over and above 1,000, making it one of the least populous areas in Montana.

The economy and main industries in Carter County are primarily related to agriculture, forestry, and fishing and hunting, as well as mining, quarrying, and oil extraction to a lesser extent. The county also has many outdoor pursuits on offer such as hiking and biking, as well as water-based activities like sailing, rafting, kayaking, and white-water rafting.

Carter County Museum was established in 1936 and is best known as the first county museum in the Montana state to display dinosaur-related exhibits.

Located in Ekalaka, the museum is home to some of the finest paleontological discoveries in the entire country, as well as a collection of various artifacts related to the lives of Native Americans and the early county settlers.

Today the area is still uncovering occasional dinosaur remains, and among the paleontological finds that are displayed in the Museum are mounted skeletons of various prehistoric monsters that would have inhabited the region.

These include an Anatosaurus (duckbill) along with the complete skulls of Triceratops, a Pachycephalosaurus, and a Nanotyrannus (juvenile Tyrannosaur. These fossils and remains were all unearthed in local exposures of the Hell Creek cretaceous formation. The museum hosts an Annual Dino Shindig that has been named the Event of the Year by the Montana Office of Tourism and Business Development.

Medicine Rocks State Park is a state-owned park located 12 miles north of Ekalaka. The somewhat unique park gets its name from the ‘Medicine Rocks’ within its boundaries, which are a series of sandstone pillars somewhere between 60 and 80 feet high.

The strange-looking rocks have various undulations, holes, and tunnels in them, and also contain various examples of Native American rock art. This is an area of land once considered a sacred holy place by the Plains Indians who inhabited the region.

The tribes gathered here each fall with the intention of calling on the medicine spirits they believed inhabited the rocks to protect their hunters. The Sioux name for the Medicine Rocks is ‘Inya-oka-la-ka,’ meaning ‘rock with hole in it’. 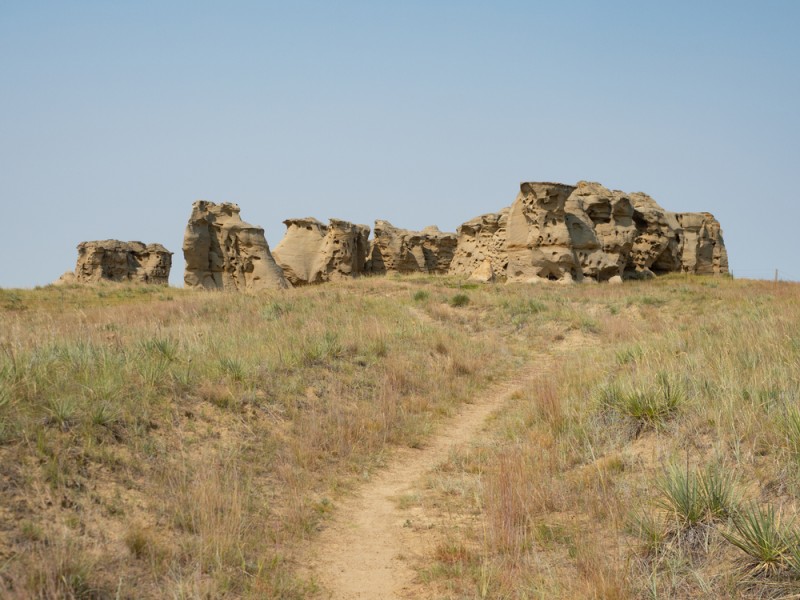 The 330-acre park is managed by the Montana Department of Fish, Wildlife and Parks, and stands at an elevation of 3,379 feet. It was listed on the National Register of Historic Places in 2017 and is also a great place to enjoy hiking, cycling, and wildlife watching activities, as well as camping.