As Montana’s Silver Queen, the Granite mine was once home to a booming silver community in the 1880s and 1890s, although it’s now a sobering reality check on the ephemeral boom-or-bust of the late 19th century.

Located in Granite County just four miles east of Philipsburg, this southwestern state park is a unique abandoned site surrounded by the beauty of Montana nature.

But let’s head back to the beginning, shall we?

A man by the name of Hector Horton discovered silver in the general area in 1865, a promising venture at the tail end of a country’s hopeless war between states – but even then, it flew under the radar.

Then, the autumn of 1872 saw the Granite mine discovered by a prospector named Holland, and folks started paying attention: the mine was relocated in 1875.

But the mine almost didn’t get its chance to shine, thanks to financial naysayers in the East. In fact, these financial advisors had effectively ordered the mine to be shut down, believing it to be a waste of time and resources.

But as luck would have it, their telegram was delayed and Granite’s miners delivered one final blow that would strike rich, proving the financial advisors wrong. While the miners were undoubtedly swimming in relief at the prospect of $40 million in silver – a life-changing sum – there was more work to be done.

As miners started moving in under the guise of income and the promise of wealth, Granite became one of the richest silver mines in the country, housing a Superintendent’s House, Union Hall, and more.

At its peak, the area was home to 3,000 residents, a stark contrast to its ghostly remains of the current time. So, what happened between then and now?

Like most gold and silver towns, the highs came with staggering lows. In less than 20 years, the mine completed its life cycle, with the end rapidly approaching in the silver panic of 1893. This economic depression lasted four years, and it deeply impacted every facet of the US economy, including the silver mines of beautiful Montana.

As the price and value of silver dropped, so too did the miners’ hope and they began their mass exodus out of the area. Although the site reopened at different times in the early 20th century, it never reemerged to the height of its heyday, eventually closing for good.

Today, Granite Ghost Town State Park stands as a bare-bones reminder of the fleeting economy, hard work, and hope that this mine brought its workers and state.

These days, while no one lives at the camp, it still preserves the Superintendent’s House and community bank, as well as the ruins of the miners’ Union Hall, a buzzing community center for dancing, card games, concerts, and more.

We recommend visiting this untouched state park starting in May during daylight hours to get the full effect. It’s easy to look at the remains and imagine the noise and bustle of its heyday.

While the site is only four miles east of the town of Philipsburg, be prepared for an uphill climb to your destination, through scenic vistas towards the distant past.

Let us know if you get to make it to Granite Ghost Town State Park, and in the meantime, let’s go over some of our favorite attractions in the area, from hiking to restaurants to parks!

A ghost town is a sight in and of itself, but we’re big fans of the cozy Philipsburg area, flanked by the Deerlodge National Forest and replete with biking trails, restaurants, and numerous mountain peaks. Speaking of peaks, let’s get climbing!

If you’re interested in striking rich on your own terms, we recommend visiting Gem Mountain, the oldest and largest sapphire mine in the entire state. As a family-owned business, this site thrives on discovery, entertainment, and sharing the stellar natural beauty of the Treasure State with its visitors.

Gem Mountain has two locations, one at a mine off of Highway 38, and the other at a fantastic store in downtown Philipsburg.

Depending on the type of experience you’re after, it’s easy to strike gold (or sapphire!) with both, although you’ll want to make a reservation for the family-friendly sapphire mine.

The downtown location offers sapphire grading, jewelry, home decor, wood carvings, and more. We’d recommend visiting both, but if you can only make time for one stop, check out the sapphire mines!

After visiting Granite Ghost Town State Park, it’ll be easy to see how a mineral can be both treasured or discarded – but we recommend holding onto your newest finds!

While this museum was founded in 1991, it has its own exciting Montana history as the site of the former Courtney Hotel. Why do we love the Granite County Museum? It’s another natural extension of the Granite mine, hosting a replica of an underground mine since 1996, as well as sharing mining equipment and a miner’s cabin.

But our favorite part is that this museum is essentially volunteer-funded, from its workers to its artifacts given by townspeople from their ancestors. How amazing is it to see clothing and furniture from someone’s relatives?

To our minds, this speaks to the warm and reaching Philipsburg community – one that gives without expecting anything in return for the sake of preserving history.

Keep in mind that summer hours are from noon to 4 pm daily, and winter hours are by appointment only.

Once you’re done at the museum, we recommend checking out the award-winning Philipsburg Brewing Company for their Otter Water Session Pale Ale. It’s almost as good as floating down the river! Cheers! 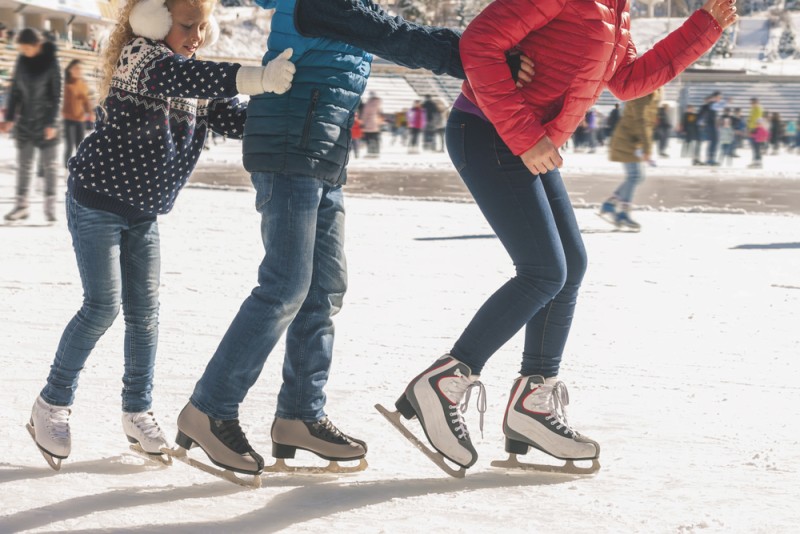 Visiting during the winter season? You’re in luck because this gorgeous venue offers stunning mountain views and a recreational area to skate.

But you don’t have to be an Olympic ice skater to enjoy this park and ice rink, because it transforms during the summertime into an amphitheater for concerts and theater productions.

Chances are, there will be something going on at Winninghoff Park while you’re in town, so be sure to check it out! 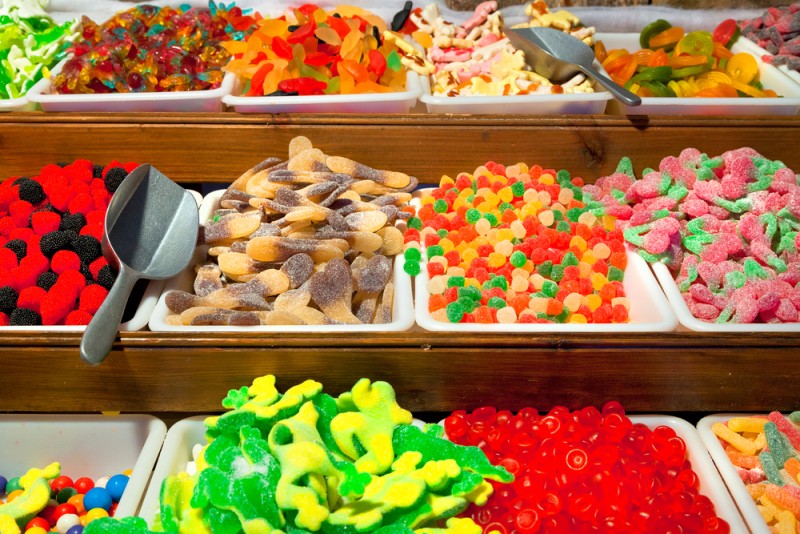 We’re not saying we had candy for lunch, but we’re not not saying it, either… But it’s okay because, with over one thousand varieties, The Sweet Palace has more than enough to fill your stomach before moving on to the next Big Sky adventure.

Be sure to check out their nostalgic candies, fudge, and saltwater taffy, but we’re big fans of their Queen’s Gift, an assortment of fudges, caramels, and taffies. And speaking of nostalgia, this restored western building truly and effectively feels like a step back in time to a simpler time – exactly how you want to feel when stuffing your face with jelly beans.

Enjoy the time machine, and don’t forget about the free samples!

Mining for sapphires is one (awesome!) thing, but there’s so much more to do in the Granite County area. Lucky for you, we’re the experts on all things Philipsburg, so let’s get into some of our favorite spots!

Granite Ghost Town State Park is perfectly situated near the Deerlodge National Forest, so you’re in for a mix of relaxing and strenuous hikes, depending on your skill and comfort level.

Check out the Ridgeview Trail, a 1.4-mile trail that provides a gorgeous view of the Pintler Mountains. Another nearby favorite is Fuse Lake, a hike lasting a bit over 5 miles that leads you to a small mountain lake – our favorite! We’ll provide more hiking alternatives below!

But if biking is more your speed, the Discovery Bike Park just a bit south of Philipsburg provides plenty of opportunities to downhill bike to your heart’s content – at all levels.

Keep in mind that they’re only open on Fridays, Saturdays, and Sundays from May until mid-October, but there’s a reason for that: snow and safety. Looking for other options? We recommend Echo Lake or Dueling Banjo. Happy trails!

Some of the best fishing in all of Montana spearheads near Philipsburg at the undiscovered gem of Rock Creek. Since much of the waters lay on public land, there are plenty of opportunities to fish for trout. And you’re in a centralized enough location here to take a day trip to the Bitterroot Mountains, or to a lake in the Deerlodge National Forest.

And there’s no way around it: swimming season is the best in Montana! Our favorite spot is Moose Lake Picnic Area, a little under 30 miles southwest of Philipsburg proper. They have great spots for picnics, of course, but a dip in the lake is a godsend during the summertime heat.

Or, check out Spring Hill Campground for a refreshing creek in the Beaverhead-Deerlodge National Forest.

Last but not least, you’ve got plenty of options to camp under the stars near Granite Ghost Town State Park.

We’ve already mentioned Spring Hill Campground, but another favorite is the nearby Georgetown Lake and Philipsburg Bay Campground – also great for fishing!

For more of a rustic experience, head back to Moose Lake or find a primitive campground in the Beaverhead-Deerlodge National Forest via this site.

Remember that this is bear country, so you’ll want to protect your belongings and pack bear spray. See you around the campfire! 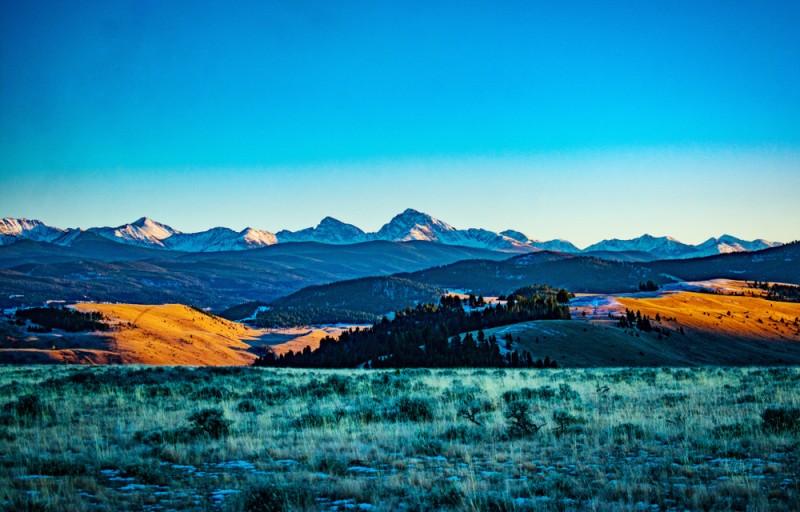 Yep, we’re back to Fuse Lake! Taking around two and a half hours to complete, this winding hike leads to a small but mighty lake known for its greyling. This is an easier, straightforward hike that’s filled with wildlife (chipmunks! pikas!), tall pines, and a well-marked trail.

We’d recommend hiking boots rather than sandals in the summertime months because certain parts of the Fuse Lake can be rocky at best – but luckily, it clears out as you get closer to the lake.

Be sure to bring bug spray along with your fishing pole, although the mosquitoes are relatively manageable here.

Another 2.5-hour hike, this hike is a bit harder to find, but once you do, you’re in for a beautiful hike (Hint: there’s a pull-off that leads to a creek, and we recommend parking there and walking the rest of the way!).

Be aware that you may be sharing the road with ATV travelers, but in truth, you probably won’t see a whole lot of fellow hikers and riders. Boulder Lakes Trail is relatively remote!

The best months to hike or camp here are July, August, and September – any time before that, and you may get surprise snow. Yes, it’s true, snow in June – welcome to Montana!

We recommended Echo Lake a bit earlier for biking, but it’s also a fantastic spot for hikers. To be honest, this hike is a bit more of an easy hike or a trot, and doesn’t exactly lead to a lake, so we don’t want to mislead you – but it’s still beautiful!

In the wintertime, Echo Lake Trail is ideal for cross-country skiing, a Montana favorite.

Ending on an easier note, as the name suggests, the Ridgeview Hike and Bike Trail is a moderately trafficked route that overlooks Philipsburg and the Pintler Mountains.

Being within walking distance of Main Street has its perks, too: we typically fuel up afterward at Bricks Pub with their amazing fish ‘n chips and craft beer. Enjoy!