Council Grove State Park is a small protected area of land on the Clark Fork River, near Missoula.

It is the site of the 1855 Hellgate Treaty, which led to the formation of the Flathead Indian Reservation. Besides its history, Council Grove State Park is popular for its scenic walks and easy access to the Clark Fork River. 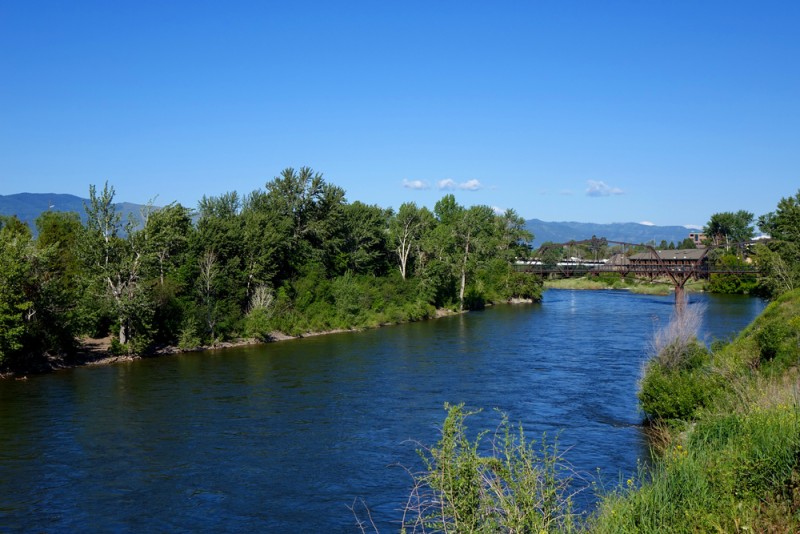 One of Montana’s great rivers, the Clark Fork runs for approximately 310 miles and is the largest river by volume in the state. Mountain runoff from the Rocky Mountains is Clark Fork’s largest water source.

The Clark Fork runs through Council Grove State Park. The river is flanked by cottonwood and ponderosa pine forest, making it a particularly scenic portion for visitors to enjoy.

Fly fishing is one of the most popular recreation activities in Montana, and the Clark Fork is famous for it. You can usually find rainbow, brown and cutthroat trout swimming in the river at the right times of the year, but you could also catch mountain whitefish and longnose suckers among other species.

It’s an easy-going, relaxed spot to fish – anglers can enjoy the park facilities as well as its lovely scenery, making it an ideal location.

It’s also a popular local spot for swimming in the summer. A beach has formed due to heavy erosion on the bank of a Clark Fork channel. On a particularly warm day, this beach is usually packed with people hoping to cool off in the water.

One of Council Grove’s biggest attractions is the same reason it became a State Park: its history. This is the site of the 1855 Hellgate Treaty between the Salish, Pend d’Oreille and Kootenai Indians and the U. S. government.

On 7 July 1855, Issac Stevens met with the chiefs and subchiefs of the Salish, Pend d’Oreille, and Kootenai tribes to begin council. The tribes wished to discuss peace terms to allow for hunting bison without fear of conflict. Stevens was more concerned with the creation of a reservation and the tribes ceding their lands.

The negotiations saw many setbacks, fraught with translation issues and disagreements. But eventually, the treaty was signed on 16 July 1855.

The formation of the Flathead Indian Reservation was a direct result of this treaty. Shortly after the treaty was signed at Hellgate, it was taken to Washington D.C. Four years after the meeting, the treaty was ratified by Congress and signed by President James Buchanan. The Hellgate Treaty was proclaimed on 18 April 1859.

You can visit the site of the council in the State Park and learn more about the event. Kiosks around the park give visitors more information about the history of the park.

Council Grove State Park is a picturesque snippet of natural beauty. Though it is only small, the park is incredibly scenic. The winding river, tall pine trees and hidden meadows help make Council Grove one of the prettiest State Parks in Montana.

The forest is formed of old-growth ponderosa pine trees. These trees live for hundreds of years and are capable of growing to heights over 200 feet. As these ponderosa pines are old-growth, the bark is of lighter color – for the first 100 years or so, it is almost black. The bark is known to smell like vanilla or butterscotch.

These huge trees make an excellent habitat for birds.

The aspen grove within the park is also a fantastic area to spot wildlife. Great blue herons and blue-winged teal birds have been sighted in the area, and frogs and salamanders are commonly found here.

You can occasionally see some larger mammals in the park in general, as the likes of white-tailed deer and black bears are known to venture into the grounds.

The park has many useful facilities for visitors, including picnic tables with grills and fire-rings, available drinking water, and toilets. The facilities are a big draw for people who like to hike, fish, or go for a swim but like to be close to certain amenities.

Council Grove State Park is also ADA accessible, giving a larger amount of people the opportunity to enjoy the park.

Council Grove State Park has an abundance of different recreational activities available, you can keep up to date with the park via their official Facebook or Instagram page.

Weave between the towering cottonwood and ponderosa pine trees on the trails in Council Grove State Park. As the park is only small, the trails are fairly short and accessible to all skill levels.

You can extend your walks by venturing outside the park, following the Clark Fork River as it meanders through the countryside. Any trail leading out of Council Grove will be a simple out and back route unless you are able to navigate a circular path for yourself.

The scenery is worth exploring on foot, as the gentle pace of hiking is well-suited to the calming, serene beauty of the area.

The main trail within the park is the Council Grove Walk, which is a quick and easy walk through fields and forests. Pets are welcome in the park; many pet owners visit Council Grove to walk their dogs.

Besides relaxing walks through the countryside, fishing is the most popular recreational activity in Council Grove State Park.

The draw of the Clark Fork River is undeniable for anglers, and the park provides an excellent access point to it. Fly fishing for trout is one of the most iconic pastimes in Montana – here, you can catch cutthroat, brown and rainbow trout. The fall is the best time to try your luck, as their numbers are normally at their highest at this time of the year.

Other fish include mountain whitefish, longnose and mountain suckers, and longnose dace. Outside the peak summer months, the park is quieter and you will have no trouble finding space to fish. Anglers can enjoy the natural beauty of the meadows and forest, experiencing some true peace and quiet as they cast their line out into the river.

You could spot all kinds of birds in the trees and flying overhead. Osprey, bald eagles, the calliope hummingbird, and Lewis’s woodpecker are all known to the area. The diversity of species in the district is really special, which is why the conservation project is so important.

Preserving the habitats for the birds ensures that they will be enjoyed by future generations. The fortunate few will see some of the rarest bird species in Montana when visiting Council Grove State Park.

Council Grove Walk is a short trail in the park; it is only half a mile long. You do get to see most of the park on this route, however, as you wander through meadows and forest and walk alongside the Clark Fork River.

It is a loop trail, so you won’t have to walk back the way you came. The walk is suitable for all skill levels and isn’t at all strenuous; there are no hills to climb, and the ground is even.