Perhaps one of the most interesting points in the Lewis and Clark Expedition history is their arrival at the junction of the Missouri and Maria’s Rivers. Marias River is a tributary of the Missouri River that wanders across the northern prairies of Montana.

History of the Marias River

Marias River is a substantial tributary of the Missouri River. Its headwaters are located in Glacier County, Montana where the Cut Bank Creek and Medicine Rivers come together.

From its headwaters, the Marias River travels approximately 170 miles towards the southeast, across Montana’s Prairie. The Marias River meets with Missouri near the town of Loma.

The confluence of the Missouri and Marias Rivers is called “Decision Point”. It was given this name after the Lewis and Clark Expedition stopped here, confused by which river was Missouri.

Exploration of the river concluded that the Marias River was not the main channel of the Missouri River, as much of the Expedition party believed.

Marias River was named by Meriweather Lewis after Maria Wood, one of his cousins. On the Expedition’s return from the coast, Lewis explored the Marias River almost to its headwaters.

In 1831, James Kipp established Fort Piegan at the mouth of the Marias River, as a trading post. Kipp traded with the Blackfeet Indians for beaver pelts and other items of value. The Fort was abandoned in 1832 and was burned to the ground by the Blackfeet.

Prior to European explorers and settlers, the lands around the Marias River were home to the Blackfoot, Piegan, and Blood Indians. With the western expansion, the Marias River was used heavily by pioneers and fur traders.

On January 23, 1870, the river became the site of one of the most brutal incidents of the Indian Wars. On this day, US Soldiers killed 173 Blackfoot, Blood, and Piegan Indians, most of whom were women, children, and elderly men. This event became known as the Marias Massacre.

In 1956, the Tiber Dam was constructed on the Marias River, forming Lake Elwell. This reservoir provides water supply for the region’s agricultural industry. Lake Elwell is also a popular spot for recreation activities.

Like many of the tributary rivers in Montana, the Marias River and its drainage basin were formed during the last major ice age as floodwaters from rapidly melting glaciers flowed through glacial valleys.

The headwaters of the Marias River is at the confluence of Cut Bank Creek and Two Medicine River, just south of the town of Cut Bank.

From this point, the Marias River travels 170 miles east and then turns southeast towards the Missouri River. Marias River flows through Lake Elwell, which was formed by the construction of the Tiber Dam in 1956. Below the dam, the river is much calmer than above Lake Elwell.

Much of the Marias River is located in remote parts of the Montana prairie. Much of the river below the Tiber Dam is inaccessible for recreation, with large distances between points where the river can be accessed. The river is bordered by tall cliffs and lined by cottonwood trees.

The Marias River’s course was frequently altered by flood activities. The largest impact on the Marias River due to flooding is at the confluence of the Missouri River.

In 1985 a large flood displaced the Marias River mouth nearly 1.5 miles from its previous location. The Tiber Dam was constructed to not only provide water supply but also to manage to flood of the Marias River.

The Marias River is a fairly remote river in north-central Montana. Much of the river is surrounded by farmland or is inaccessible for public use. However, the river does have some interesting attractions and activities that draw people to its waters.

The Marias River Bridge is located on Marias Valley Road near the town of Shelby. This bridge spans the Marias River parallel to Interstate 15. Once the only crossing of the Marias River, the bridge was constructed in 1939 as cars were becoming more accessible for travel, and interstate commerce was utilizing trucks to move items from town to town.

The bridge looks unassuming, but in 2012 it was added to the National Register of Historic Places. Due to its age and lack of maintenance over the years, the bridge has been closed to vehicle traffic.

Lake Elwell Recreation Area is a federal, recreation area that is managed by the Bureau of Reclamation. Lake Elwell, also known as Tiber Reservoir, was created in 1956 following the construction of the Tiber Dam.

The lake is a primary source of water for surrounding agriculture and also provides municipal water supply for Chester and Rocky Boy Reservation. The lake is named after Judge Charles B. Elwell who was a former director of the Montana Reclamation Association.

Today, the lake is a popular spot for boating, fishing, and camping in central Montana.

This small recreation area provides a safe spot for paddlers to put their boats into the river, as well as picnic tables and vault toilets.

The real attraction at Pugsley Bridge Recreation Area, however, is the historic Pugsley Bridge. This unique bridge was constructed in 1949 and was designed by Thomas Hurdle.

The bridge was built at the same location as the original bridge that crossed the Marias River, which was damaged by a heavy ice flow in 1947. The bridge is a cable-stay bridge which is quite common in Europe but is not often seen in the United States.

Fishing is perhaps the most popular activity on the Marias River. The upper section of the river (between the headwaters and Lake Elwell) isn’t a great spot for trout fishing which is highly popular in Montana, but it does provide good fishing for bass, catfish, walleye, and whitefish.

The Tiber Dam and Lake Elwell provide a nice trout fishery in the central part of the river. Game fish that you’ll find in Lake Elwell include northern pike, rainbow trout, and walleye.

Below the Tiber Dam, fishing is less popular as access to the river is limited. However, there are a few locations where you can fish from the shore for brown and rainbow trout. The best fishing below Tiber Dam is the 4.5-mile stretch just below the dam.

Because the Marias River is pretty shallow above Lake Elwell, boating isn’t a terribly popular sport along this section of the river.

There are some opportunities for canoeing and kayaking on the upper section of the river, but the river is too shallow for motorized boats.

Below Tiber Dam, the river flows are maintained at a fairly consistent rate, making Marias River a perfect spot to canoe, kayak or raft. Most people put in at Sanford Park just below the dam and take out just after the confluence with the Teton River.

Boating on Lake Elwell is the major recreational activity in this section of the Marias River. The Bureau of Reclamation has a developed marina (Tiber Marina) with a concrete boat ramp, campgrounds, and basic facilities including water, toilets, and seasonal concessions.

There are also an additional 4 boat launches around the lake, but they do not provide the same amenities as are available at Tiber Marina.

Camping along the Marias River is most accessible at Lake Elwell. The Bureau of Reclamation has 7 developed campgrounds on the shores of Lake Elwell, with a total of 32 campsites. There are sites with available RV hookups.

Williamson Park located south of Shelby along Marias Valley Road offers additional camping opportunities along the upper reaches of the Marias River. This is a small campground but there are toilets and walkable access to the river.

Located south of Shelby on the shores of the Marias River is Marias Valley Golf and Country Club. This course is considered one of the best public courses in Montana.

The course is set along the river bluffs and ancient cottonwood trees line the fairways.

If you’re willing to put your canoe or kayak in the Marias River above or below Lake Elwell, you’ll be rewarded with some of the best wildlife viewings in Montana. This is particularly the case for the 57 miles just below the Tiber Dam.

With few places where the river is accessible to people, you’ll have some of the best opportunities to view whitetail deer, beaver, muskrat, waterfowl, pelicans, porcupine, songbirds, bald and golden eagles, and other native wildlife species. 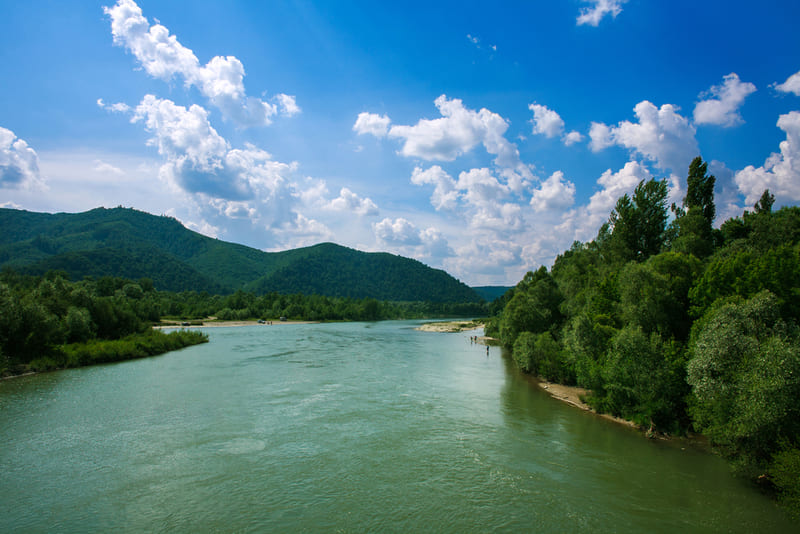 1. How deep is the Marias River?

On the upper portions of the Marias River, the water depth is fairly shallow. Average stream gauge measurements are around 3.5 feet. Directly below the Tiber Dam, the river is at its deepest, with average depths around 8 to 10 feet.

As the river moves closer to the confluence with the Missouri River, the stream gauge measurements are around 5.5 feet.

2. How long is the Marias River?

The Marias River starts where Cut Bank Creek and Two Medicine River join. This confluence is located in Glacier County. The Marias River’s confluence with Missouri is near Loma, Montana. The distance between the headwaters and the mouth is approximately 170 miles.

3. How wide is the Marias River?

The Marias River follows a well-defined valley that stretches on average about three-quarters of a mile wide. Through this valley, the river width varies.

During the Lewis and Clark Expedition, the Marias River was measured by William Clark near its confluence with the Missouri River. At this point, the river’s width was measured to be approximately 200 yards wide.

4. Where does Marias River start?

The Marias River starts at the junction of the Two Medicine River and Cut Bow Creek. The junction is located approximately 12 miles north of Valier, MT, and a similar distance south of Cut Bank.

5. Where does Marias River end?

The Marias River ends at its confluence with the Missouri River. This point is located just a few miles southeast of the town of Loma, MT.

6. Which way does the Marias River flow?