Montana is renowned for being a destination rich in recreation. Along with more traditional outdoor pastimes, like hiking, skiing, or horseback riding through the prairies, Montana has also become a top location for paintballing.

In this article, we will take a look at the best spots for paintball In Montana for those looking to check out this high-octane sport while in the Treasure State.

Guide to Paintball In Montana 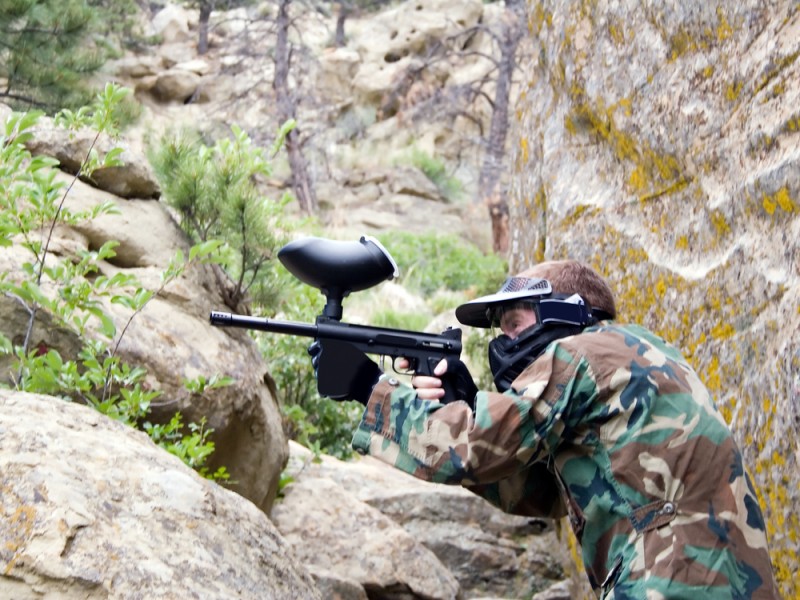 In a game of paintball, participants try to eliminate each other from the match by shooting each other with balls of dye, or paintballs.

Those players who are hit with a paintball get splashed with the dye, which shows that they are eliminated. Participants shoot at each other with semi-automatic paintball markers.

Paintball is usually played on a field marked with obstacles and challenging terrain. Hurdles to either avoid or hide behind might include natural land formations, like hillsides, or objects like truck tires.

Most often, paintball is played in teams, and the object varies from game to game.

In its simplest form, the game involves players trying to eliminate everyone on the opposing team by shooting and marking them, but it can also be more complicated. Sometimes, for example, the objective is to capture the other team’s flag.

To get more of an idea of how paintball works, check out this footage from the 2022 Paintball World Cup Finals.

History of Paintball in Montana 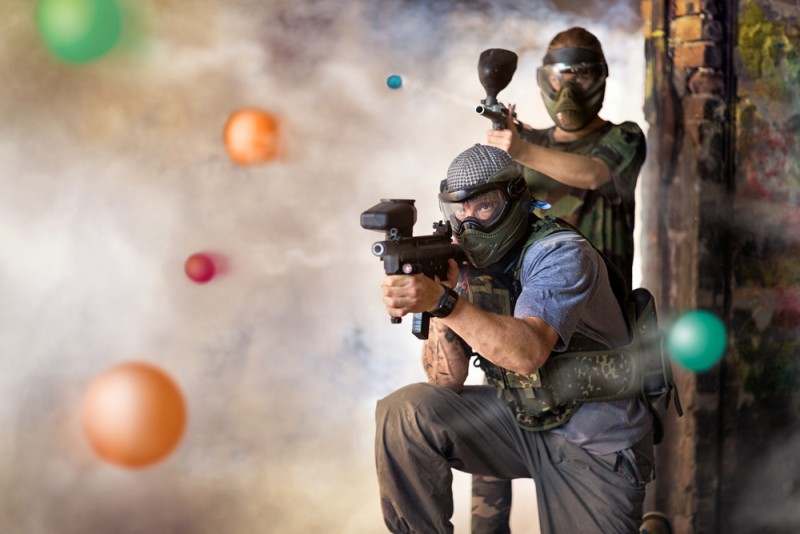 According to Action Packed Paintball, the concept of paintball was first invented in the 1960s by the Michigan-based Nelson Paint Company.

Originally, paintball was not intended to be used for recreation. Instead, it was an invention to help loggers and cattlemen mark trees and cattle.

The first official game of paintball took place in the winter of 1981, in the woods of New Hampshire. It had evolved out of a group of friends who had been discussing whether those who lived in the city could compete against country people out in the woods.

Not even a year later, the first commercial paintball field was opened. From there, fields began to sprout all over the country. The game was especially well-suited to Montana, given its huge spaces of undeveloped land.

While paintball in Montana was most popular around the turn of the millennium and the years directly after, there are still multiple establishments in the state where you can experience this adrenaline-spiking game. 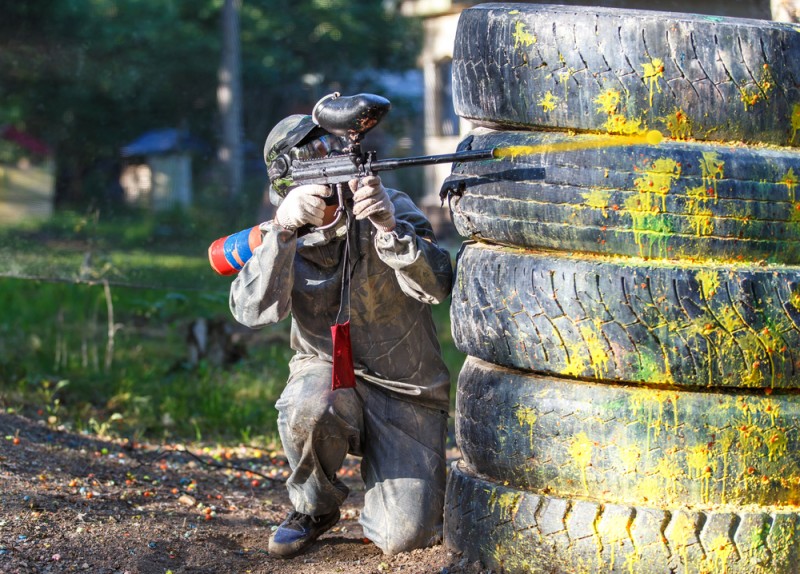 Paintballing in Montana is safe provided you follow the outlined rules, including wearing all the prescribed protective gear.

All players have to wear paintball goggles, which will protect their eyes from explosions of dye, as well as from dust and other particles out on the field.

Even if you’re not playing a game, you must wear goggles while in any area where paintballs are being shot. Most paintball operators also require participants to wear facemasks.

Player-to-player contact is not allowed during paintball, and referees are usually on hand to eliminate any participant not following the rules.

What to Expect During Your First Paintball Game 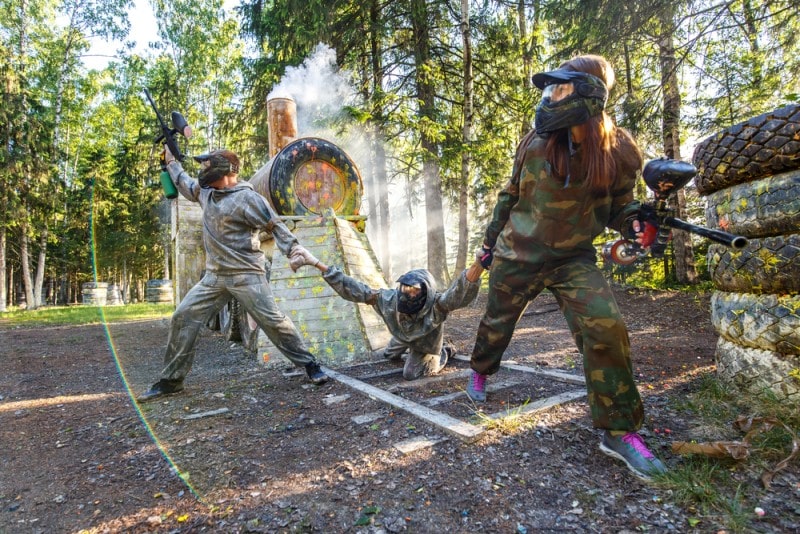 Paintball games usually last for around 10 to 15 minutes, and for most people, it’s a great workout. You’ll likely be running, jumping, dodging, and possibly even crawling, all while pumped with adrenaline.

Though paintball is safe, getting hit with a paintball can hurt, Action Paintball explains. The severity of the pain will depend on how far the person hitting you is standing from you, and how many times they hit you, along with where on your body you get hit.

In most cases, getting hit feels like a slight sting, similar to getting whipped with a towel or flicked by a rubber band.

There are several places where you can experience paintballing in Montana. Here are the best of them:

Kalispell’s Montana Action Paintball has been one of Montana’s most popular paintball centers for 10 years.

Open seasonally in the warm weather, Montana Action Paintball opens its doors on Saturdays between 8 a.m. and noon. It is also open during the week for private paintball parties.

They also run a zombie trail every Saturday in October, where participants can hunt the undead with glow-in-the-dark gel blasters in the lead-up to Halloween.

Paintball prices vary from $25 to $70 per person, based on whether you are bringing your own gear or purchasing an upgraded package, and there are discounts available for larger groups.

Montana Action Paintball emphasizes that, while getting hit on the field does hurt for a moment, there are children as young as 10 that enjoy the games, and the temporary discomfort shouldn’t deter anyone from playing.

Paintball at Paws Up, Greenough

The Resort at Paws Up in Greenough is one of Montana’s premiere accommodation facilities.

The resort offers luxury ranch, rental, and camping-style accommodations, along with a spa, up-market dining, and a range of outdoor activities, including outdoor paintball.

The on-site paintball course can accommodate up to 14 people at a time. There are several types of games that can be played on this course, from ‘capture the flag’ to ‘terminator’.

The resort provides everything you need to play the game, including coveralls, a paintball gun, and 1,000 rounds of paintballs.

Paintball is offered at the resort between spring and fall, and costs $155 per person.

Anyone older than 10 can play, and in some cases, children even younger can join in, provided their parents are confident that they’ll follow the safety rules.

The paintballs from this establishment don’t tend to stain, but they still recommend wearing clothing that you don’t mind getting dirty. When purchasing a rental package, you will receive a semi-automatic marker, mask, compressed air fills, and 500 paintballs.

For groups of five to nine people, Diamond Paintball costs $35 per player for two hours. Groups of 10 or more cost $30 per person, and it’s $20 per extra 500 paintballs.

They also offer a mobile paintball service where players who have their own field can simply rent the needed equipment for $25.

Situated in Billings, Wild Rose Paintball & Airsoft is a great option for those who only have a small number of people wanting to play.

They have no minimum number of participants required, so even if you’re on your own, you can usually join a group that’s already playing.

Wild Rose also offers equipment rentals and can cater to larger groups too. Additionally, participants are able to bring their own gear and use the space at Wild Rose if they prefer.

They also offer celebratory events, from children’s birthday parties to bachelor parties and everything in between.

Wild Rose usually recommends the game for children eight years old and up, but again, in certain cases, younger children are welcome to play provided they are able to.

For those who do not want to experience the signature sting of the paintballs, Wild Rose also offers .50 caliber paintball guns that leave less of an impact.

A reservation isn’t required if you want to play paintball at Wild Rose and don’t have a large group. Walk-on hours are Saturday between 9 a.m. and 6 p.m., and Sunday between 1 p.m. and 5 p.m.

Rental packages for paintball are $30 per person and include entry, air fills, marker, goggles, tank, hopper, and 500 paintballs.

Wild Rose also offers airsoft games, and there are season passes available for purchase that work out to be cheaper for frequent players.

Paintball might not be a traditional Montana activity, but it is lots of fun. If you’re willing to give this exciting sport a try, these are the best places to visit in Montana.

Always follow the safety rules, never take off your goggles, and have fun!