The Earthquake Lake Visitor Center is a place where you can go to find out about one of the most powerful earthquakes ever recorded in the North American region.

This landscape-changing event occurred in southwest Montana’s West Yellowstone, and the center contains all the information related to the 1959 Hebgen Lake Earthquake that wreaked its devastation on the region.

The Earthquake Lafe Visitor Center is located north from the direction of West Yellowstone on Highway 191 and is surrounded by some amazing views and scenery.

Getting to the Visitor Center 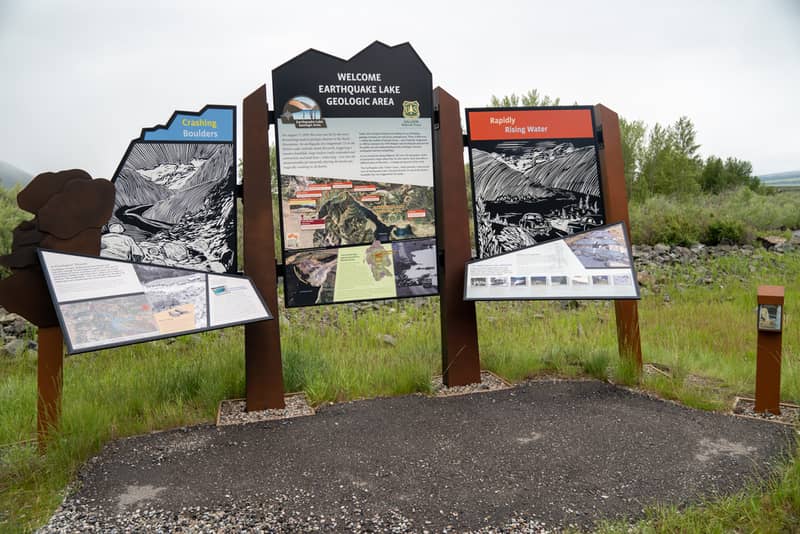 You can get to the visitor from the direction of West Yellowstone by following Highway 191 for 8 miles, then taking a left onto Highway 287 at the sign-posted junction. After this turn, you have another 17 miles along the highway before you come up to the visitor center, which will be on your right.

The visitor center is just over 40 miles from the town of Ennis, which also is known for its lake of the same name. The quake center is an ideal and easily accessible feature on any scenic drive through the area.

One thing that makes it an ideal stop-off is the fact that it is surrounded by impressive views of the surrounding scenery.

The center sits atop the 80 million tons or more of rock that broke away from Sheep Mountain when the event occurred, and the landscape includes views of Hebgen Lake, the Madison River, and the Madison Range.

The Earthquake Lake Visitor Center first opened its doors to visitors in May 1967. It operated for more than 40 years before renovations of any major scope became necessary.

In 2012 the facility was due for some attention which resulted in an upgrade across 2 years and included the expansion of the facility from 1,500 to 2,400 square feet.

A reported 50,000 visitors or more have set foot in the visitor center each season since its public reopening in 2014.

The Hebgen Lake Earthquake happened on the night of August 17, 1959. The earthquake measured 7.5 on the Richter scale and set off a chain of events that included 80 million tons of rock collapsing into the Madison River canyon at speeds up to 100 miles per hour.

Twenty-eight people who were camping nearby lost their lives and the event blocked the Madison River in under a minute. Thus what we know today as Earthquake (Quake) Lake was formed and the landscape of the region changed forever.

You can watch a mini-documentary on the history of the Hebgen Lake earthquake here.

Features of the Visitor Center 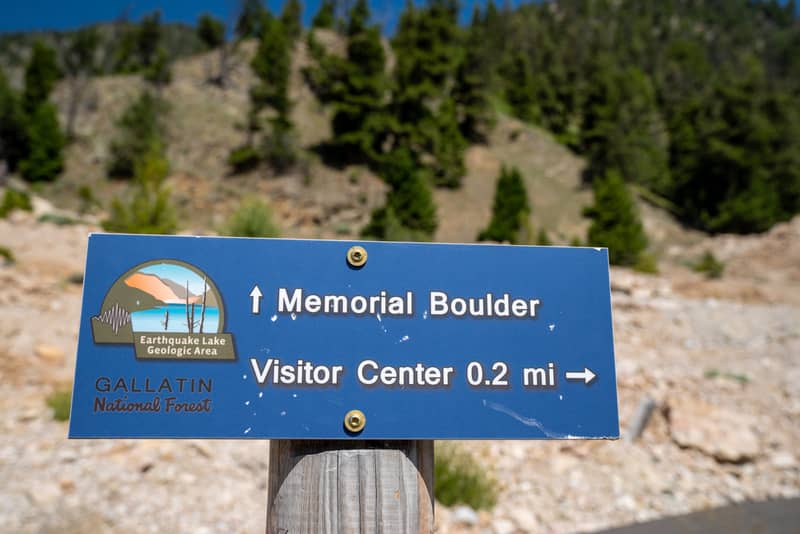 There are various walking paths around the outside of the center including a short one that leads to a nearby memorial boulder. Other trails overlook points that have some of the best views you are ever likely to encounter.

This includes the somewhat eerie Quake Lake which comes with the skeletal tops of trees breaching the surface from the depths.

The visitor center building is the place for panoramic views of the mountain that collapsed and Quake Lake below. In the observatory of the center, a movie is played detailing the events around the lake’s formation.

The facility also operates a bookstore that offers various souvenirs in partnership with Yellowstone Forever.

Several interpretive signs outside of the visitor center provide background information about the 1959 earthquake and the area’s geologic activity.

Inside the center, interested parties can check out an actual working seismograph and get more scientific information and detailed interpretive displays related to earthquakes and geologic activity.

You can always explore the surrounding landscape further afield by yourself by driving to the various marked points on the map and following another series of interpretive signs related to the fateful incident.

Short walks and trails lead off from the various spots including ones to the Refuge Point Overlook.

The visitor center typically operates seasonally from late May through mid-September. Hours of operation are 10 am-6 pm and 10 am-5 pm in September.

The visitor center can be contacted from May through September through the website or by calling (406) 682-7620.

The Earthquake Lake Visitor Center is an interesting and scenic place to drop into for anyone on their travels in Montana and is close to the vicinity of West Yellowstone.

The facility provides visitors not only with insights into the fateful occurrence that caused an entire rearrangement of portions of the landscape, not to mention fatalities but also with some great surrounding scenery and exploration opportunities.

So why not make a point of including a stop at the Earthquake Visitor Center on your next scenic drive in the West Yellowstone region?