Known for its picturesque landscapes and abundant wildlife, Montana is also famous for its rich birdwatching opportunities.

With over 440 species of birds in Montana, it is impossible to feature everyone in a single blog post, just as it would be impossible for a visitor to spot all of them during a single trip to the Big Sky State.

While common bird species such as the American Robin and Blue Jay are familiar in the region, this article features ten of the most unique and vibrant species of birds in Montana and includes the best methods bird watchers can go about locating and identifying them. 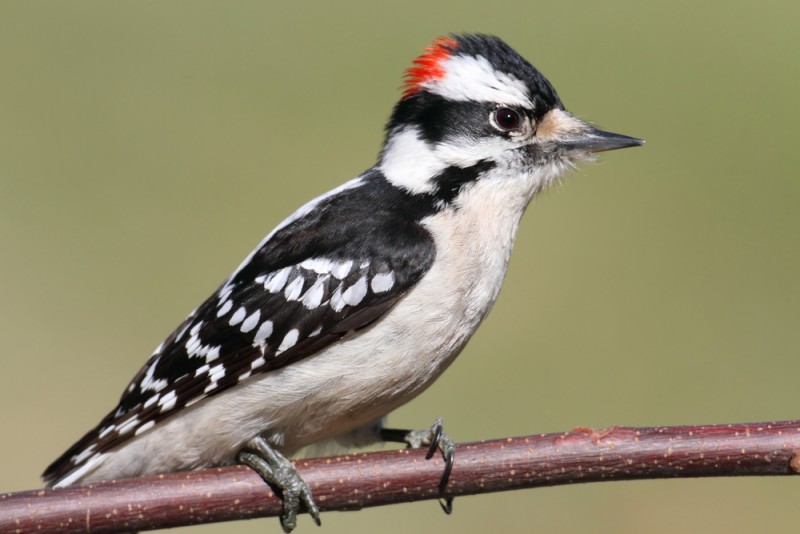 Scientifically known as Dryobates pubescens, the Downy Woodpecker is one of Montana’s most common backyard birds and the smallest woodpecker found in North America.

The Downy Woodpecker is easily identifiable thanks to its distinguished black wings with white spots and notable white underbellies.

The males of the species are even easier to spot, boasting a particularly vibrant red spot on the back of their heads that is not shared with the females of their species.

Visitors to Montana will not have to look too far to spot this abundant bird species, as it is one of the most common backyard birds in the state and can often be spotted at any nearby feeder. 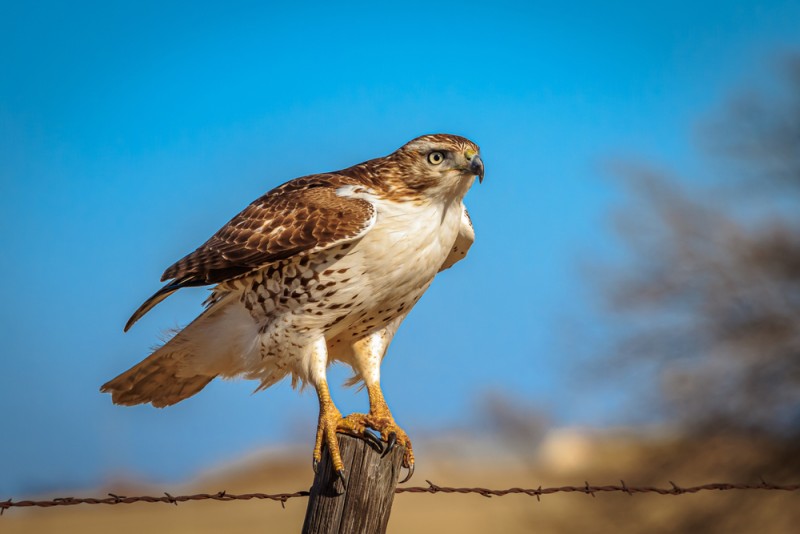 The second largest hawk in both Montana and North America, the Red-tailed Hawk is one of the most common and easiest distinguished hawks in the state.

Scientifically known as Buteo jamaicensis, the Red-tailed Hawk can grow up to 25.6 inches in length and feature wingspans of up to 52.4 inches, posing an impressive image as the bird can often be spotted soaring above open countries and woodlands as it hunts down its prey.

While the Red-tailed Hawk has a somewhat variable appearance, it can most often be identified thanks to its dark brown wings and white belly speckled with bands of dark brown. But, of course, the most distinguishing aspect of identifying this species is its characteristic cinnamon red tail from which it gets its name.

The Red-tailed Hawk can be spotted across the state from Fall to Spring, with most of the species migrating to the southern United States for the Winter.

However, some populations near the Montana-Idaho border reside in the area year-round for winter visitors hoping to spot this local bird species. 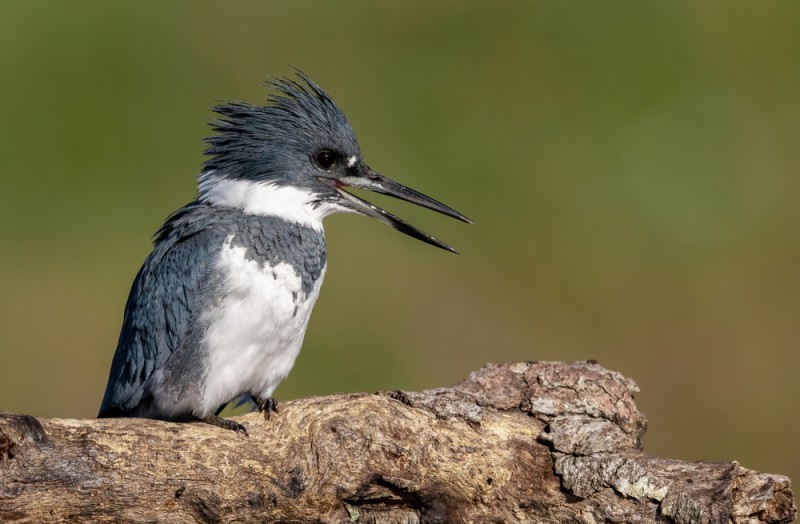 Known as Megaceryle alcyon, the Belted Kingfisher is a medium-sized species with a wingspan measuring up to 22.8 inches and weighing from 4.9 to 6.0 oz.

One of the most exotic-looking bird species in Montana, the Belted Kingfisher is described by its stocky build and large head with a double-pointed crest that covers the entire pileum. It can easily be identified by the white collar and belly that contrasts the bird’s otherwise uniform blue-gray dorsum.

Preferring a wet habitat, birdwatchers will want to search nearby streams, rivers, ponds, lakes, and estuaries if they hope to spot the Belted Kingfisher. 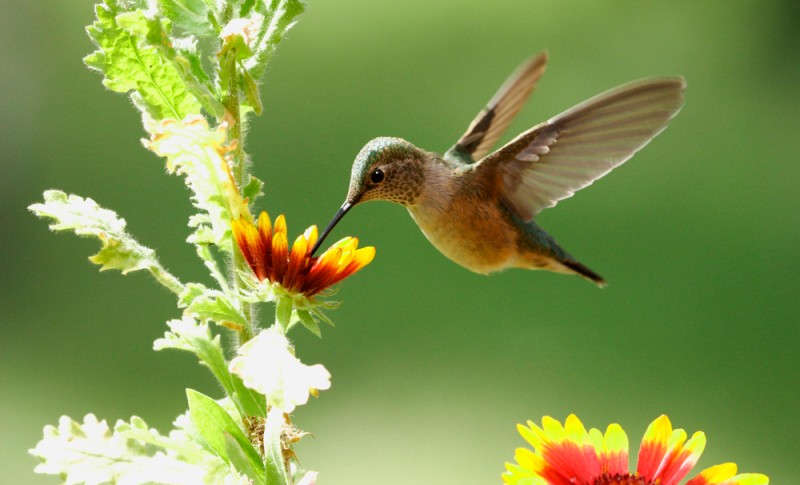 Hummingbirds are a common favorite among birdwatchers, and while most species in Montana are rare and difficult to spot, the Broad-Tailed Hummingbird is perhaps one of the most abundant.

Known as Selasphorus platycercus, the Broad-tailed Hummingbird boasts a relatively long body that can reach up to 3.5 inches, with a wingspan of about 5.25 inches.

The Broad-Tailed Hummingbird is distinguishable by its iridescent green back and long broad tail, which is primarily green but features rufous colored outward feathers by the base of the tail.

Primarily observed in May, June, and July, the Broad-Tailed Hummingbird does not reside long in Montana and, like many species, migrates to the southern United States and Mexico for the Winter.

The species tends to reside in habitats that include ponderosa pine and aspen groves, mountain meadows, pinyon woodlands, and other types of open woodlands in the state. 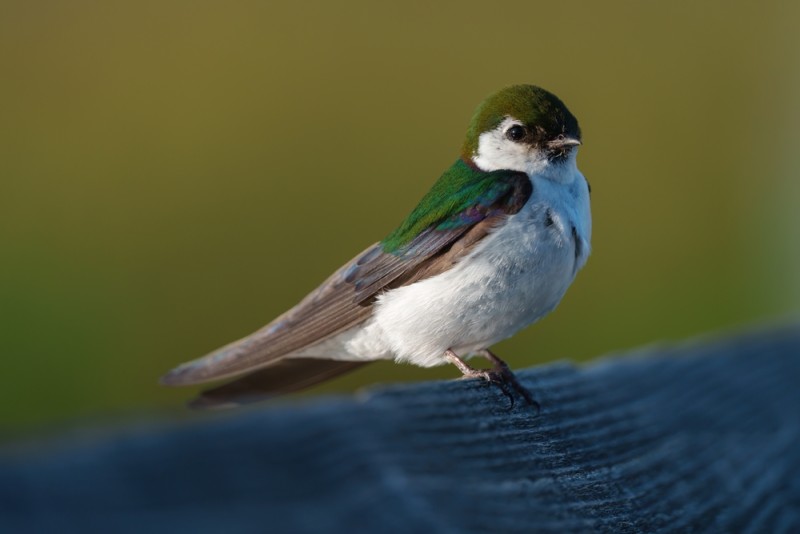 One of the most beautiful passerine species in the state, the Violet Green Swallow tends to live in large flocks and is easily identifiable thanks to its unique flying style.

The species boasts a soft plumage of velvety green or greenish brown and features a faint shade of purplish violet on its nape from which it gets its name. The species’ white underside rises around its ears, where it covers partly, almost to encircle the eyes.

Another migratory species, the Broad-Tailed Hummingbird only resides in Montana primarily from May to July, most often inhabiting the state’s coniferous forests. Other breeding ranges include deciduous forests and mixed woodlands. 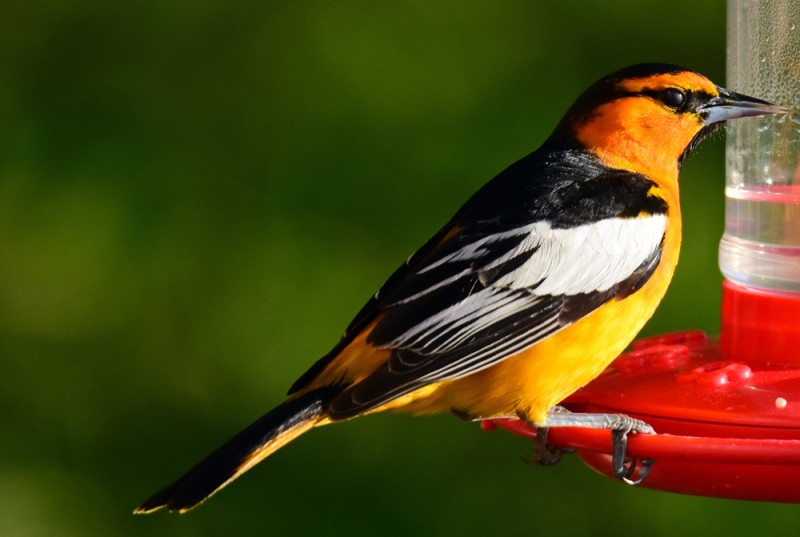 While the most common oriole in the Northwestern United States, the Bullock’s Oriole is also one of Montana’s most vibrant and beautiful bird species.

The species features a unique coloration pattern, with the crown, nape, back, and scapulars all black, while the remainder of the head and the bird’s underparts are all vibrant orange-yellow.

When they are young, the males’ appearance reflects the species’ females, typically grayish-green and yellow with black throats. However, as they get older, the males of the species become more vibrant with bright black and orange plumage.

Also known as Icterus bullockii, Bullock’s Oriole is most abundant in Montana in May and June but can be found in the state in July and as late as August. 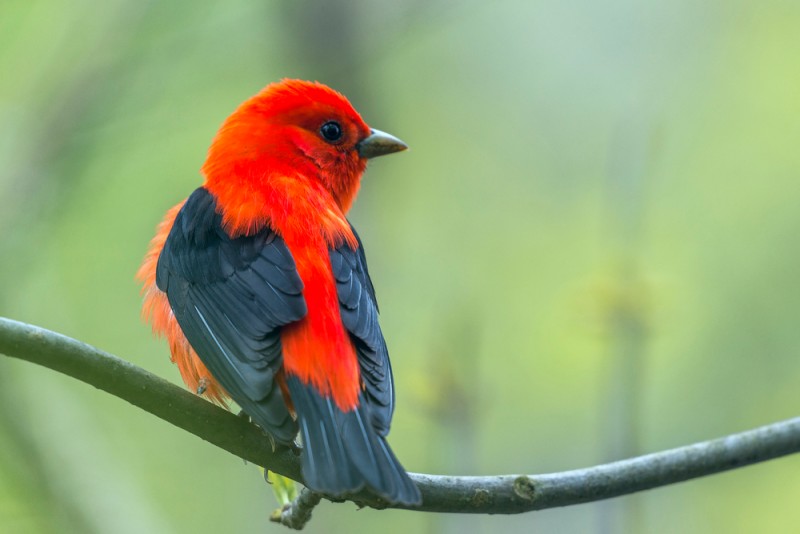 Scientifically known as Piranga olivacea, the Scarlet Tanager has only recently been reclassified as a cardinal rather than a tanager. However, despite its now misleading name, the species remains one of the most vibrant and beautiful birds to grace the skies and backyards of Montana.

While it is much more common in the eastern United States and other parts of North America, the Scarlet Tanager is known to frequently migrate through Montana, with several records of the species in the state occurring over the past decade.

Those lucky enough to spot the Scarlet Tanager can easily identify the species thanks to its flaming orange color, which is uniform throughout most of its body, except for its black wings and tail.

Since the species only migrate through the area and feature an accidental range, the Scarlet Tanager does not enjoy a typical habitat in Montana. However, the most reliable time to spot the species in the state is in May and June, during which the bird’s migratory patterns are most likely to bring the species to the region. 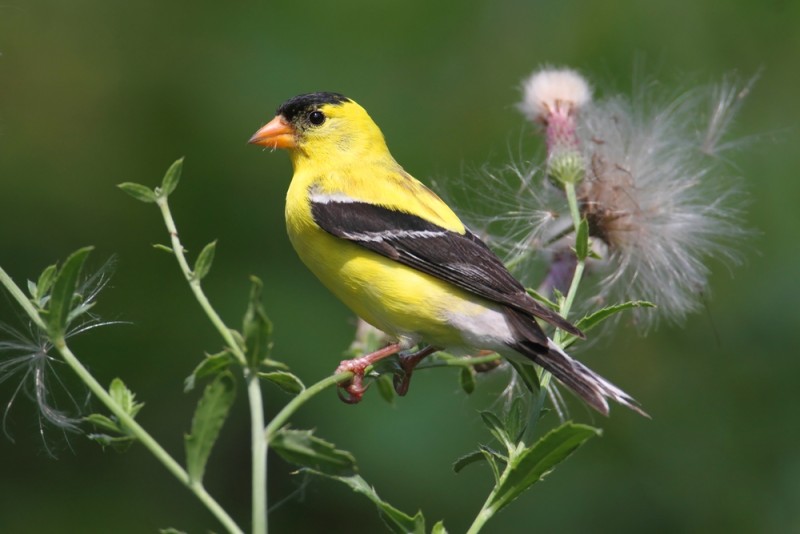 One of the most abundant birds in Montana, the American Goldfinch can frequently be spotted at one of the many backyard feeders throughout the state.

Additionally, the American Goldfinch is one of the state’s most easily identifiable birds thanks to the male’s bright golden-yellow plumage, which is nearly uniform throughout its body except for the black crown and wings. The female American Goldfinch has similar coloring, although it is often referred to as the “brighter version.”

Most populations of American Goldfinch in Montana migrate south for the winter after breeding in the state. For this reason, the most abundant months for spotting this beautiful bird are from May until September.

While widely distributed throughout the state, the American Goldfinch is most common in weedy fields, orchards, gardens, and river flood plains. Furthermore, some populations in western Montana make their nest in the state year-round, offering fantastic birdwatching opportunities for winter visitors. 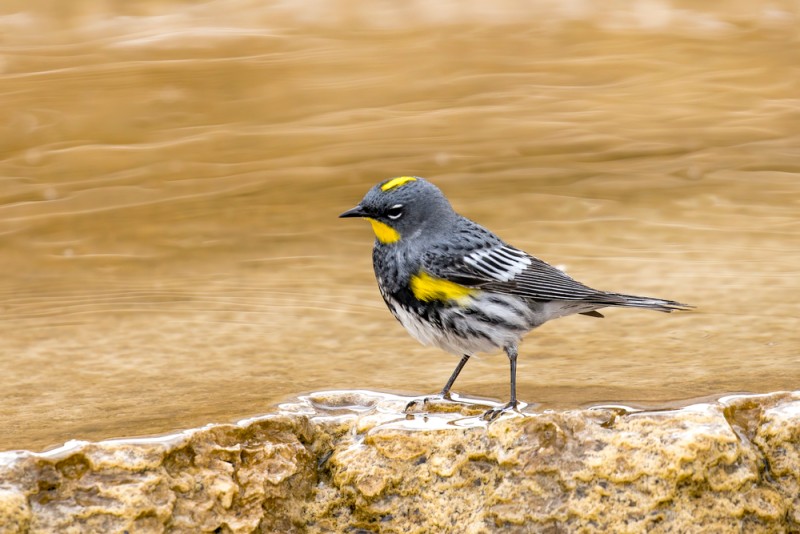 Considered a relatively large warbler with average body lengths reaching up to 5.5 inches and wingspans up to 9.1 inches, the Yellow-Rumped Warbler is best known for the yellow feathers that cover the bird’s face, sides, and rump, from which the species gets its name.

While there are many subspecies of this warbler, all share this distribution of yellow coloration but feature additional variable plumage ranging from dark black to light brown.

Featuring a widespread breeding range in the state, the best time to spot a Yellow-Rumped Warbler in Montana is from May to July. The species frequently inhabits mature coniferous and mixed coniferous-deciduous forests. 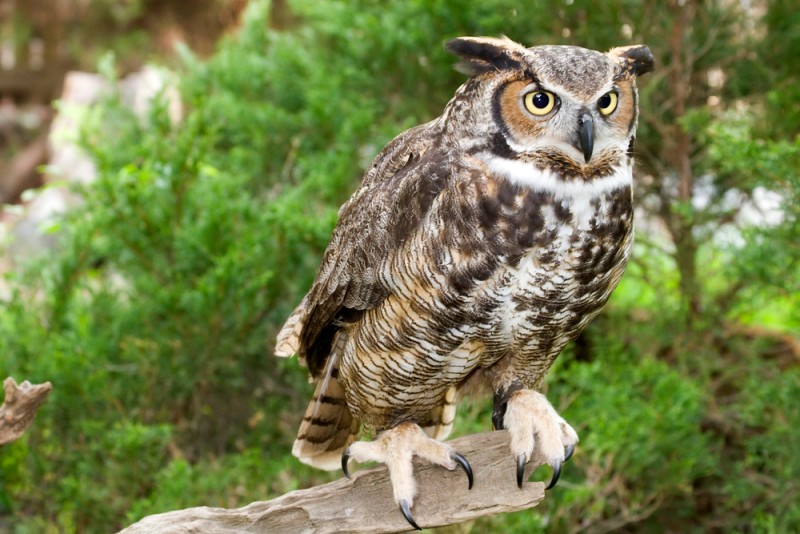 A large owl that can feature wingspans that reach up to 57.1 inches, the Great Horned Owl is one of the most imposing creatures gracing the skies of Montana.

Known for its ominous hooting sounds, the Bubo virginianus is easily identifiable and features yellow eyes, white throats, black bills, and tufts of feathers that sit wide on its head and are often mistaken for horns at night.

The Great Horned Owl resides in Montana year-round and most frequently makes its nest in the regions between river bottoms to timberlines.