Running Eagle Falls is located in Montana’s Glacier National Park near St. Mary. It is administered by the National Park Service and is a somewhat unique, scenic gem of a waterfall in the peaceful Two Medicine Valley part of the national park.

The Running Eagle Falls holds religious significance for the Blackfeet Nation, and the name in fact comes from one of their warriors who was also unique in that she was female.

The spot was also apparently named Trick Falls by new settlers in the area. This is largely due to the fact that this falls is actually something of a two-in-one.

Water rushes over the upper falls during runoff and completely obscures the lower falls. This can often give the bizarre impression of a waterfall falling onto itself!

It’s a different matter in the summer. The river flow levels out and the water then seems to change course and flow only out of the lower falls through a jagged hole halfway up a cliff.

The column of water running from that opening is the Running Eagle Falls overflow, and this is the main cascade onto the lower drop making it appear as if the waterfall falls onto itself! 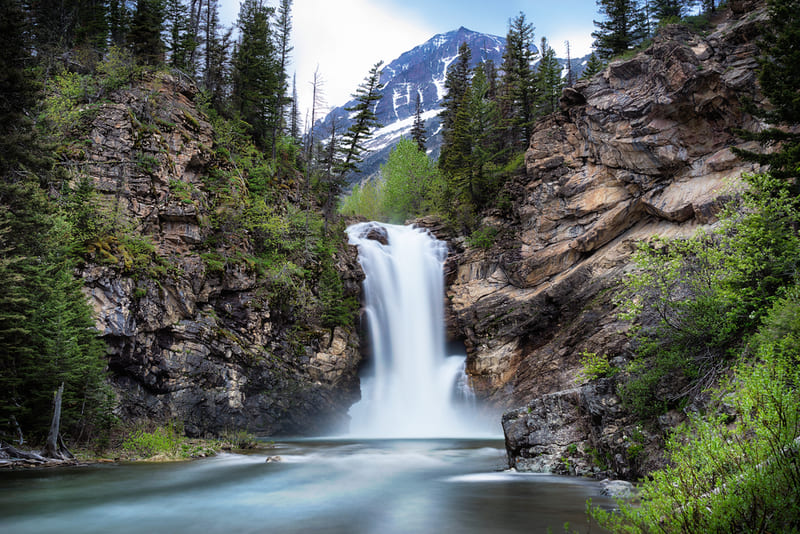 The History of the Running Eagle Falls

Running Eagle Falls owes its name to a legendary Blackfoot Indian woman named Pitamakan Running Eagle who showed bravery and skill learned from her father and became useful in battle. There are various interpretive signs at the trailhead of the short hike that explain her story.

Pitamakan is actually a man’s name, which signifies the high and unique respect allowed to this woman by the Blackfeet male warriors. It has been reported that she was the only woman of the tribe given a man’s name. She died around the 1830s but her name and her history were long held in esteem by older tribal members.

As a girl ‘Weasel Woman’ was her name which was later changed to Running Eagle due to her bravery and useful warrior tactics. She also reportedly experienced her vision quest.

Although the name of the falls was for a time changed to Trick Falls by the new settlers, it was eventually replaced with the historic original in the region long inhabited by the Blackfeet in order to honor the memory of the only famous warrior in the tribe.

Getting to the Running Eagle Falls

You can easily walk to Running Eagle Falls from the large car park. The main trail is easy to spot, and the route runs along a mostly flat 0.6-mile out-and-back trail.

As it is so short and easy-going, the wheelchair-accessible trail at Running Eagle Falls is an ideal spot for families. You will traverse a couple of footbridges for anyone who wants to take in the distant view of the falls with their scenic mountainous backdrops.

Shortly after crossing the bridges, you’ll come to the end of the designated trail. You’ll find a viewing deck for a closer look at the falls.

Visitors would need to scramble quite a bit further to get to the banks of Running Eagle Creek especially to see the sinkhole responsible for the falls’ lower tier falls.

However, some of the viewing areas have been restricted in recent years due to the possibility of moving earth. 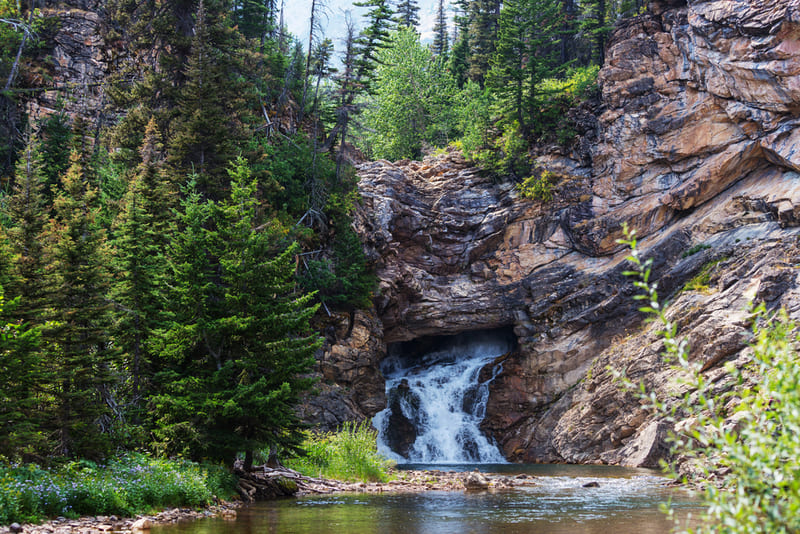 However tranquil Two Medicine Valley might look or sound, this is a popular and rather busy waterfall at certain times of the year. Even the old-school red tour buses stop here intermittently.

Running Eagle Falls is located in the East Glacier region. You can get there by Highway 49, heading about 4.5 miles west along Two Medicine Road which brings you to the trailhead parking area.

Other Activities Close to the Falls 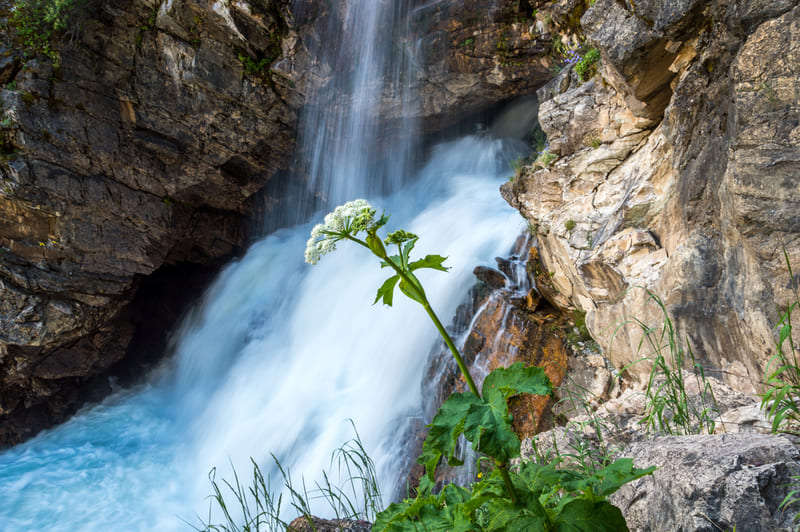 So we already know Running Eagle Falls is a great place for families, as it is for picnics. You can take a break and dip your toes into the cooling water whilst everyone tries to get their best Instagram angle.  It is a great spot for a family photo though with the amazing surrounding scenery.

You could also try a boat tour over Two Medicine Lake or take in the Glacier National Park landscape from aboard a red bus.

This is also reportedly a top spot for some birding where those on the lookout might catch glimpses of species such as Horned Grebes, Buffleheads, and American Wigeons.

The Running Eagle Falls and its surrounding Glacier National Park environment are located in an area with some of the most stunning natural scenery in the world. The beauty and magic inherent in the falls are just what keeps visitors coming to the state time and again.

If you are a lover of waterfalls the Running Eagle Falls are a must-see. They are indeed unique and slightly magical in their appearance.

If you are anywhere close to Glacier National Park head to the East side and see if you can get close to these most picturesque and unique falls named after a unique female Native warrior.